The black belt approached me and I waited for the words I had heard so many times before.

It was September, exactly seven months ago and I was standing in the middle of the hall, my judo belt tied around my waist crushing me, my ability to breath impossible. I stood waiting for the words.

My seven year old son, Rhys, had come into the dojo happily. A challenge that had taken years of work, practice and planning – the simple task to all other families had been, for us, a smash down of multiple barriers. The new environment, the ability to cope with overbearing sounds, the people, the anxiety of not knowing what was happening.

My son is autisitc. But that doesn’t mean he is unable to learn or experience things in his own way.

Throughout the session, Rhys had run around the mat, off the mat and at multiple times he had lain down in the middle of the other children and rolled about. He had not done one judo move and his ability to follow instruction was limited or close to non-existent.

Now I stood waiting for the words I had heard so often.

“Maybe you should give it a few years”

They are all statements I have heard at other sports and after school type sessions. The polite way of telling me that my son doesn’t belong.

I stood and waited for the statements once more.

It was a response I had never heard before. A response that made me babble an emotional “Ok, I will” before turning my head to catch my breath and blink away the immediate moisture that had accumulated in my eyes.

Over the next few weeks and months, Rhys went to judo every week and I took my place as an assistant coach alongside the others. I watched a club adapt to my son’s needs trying one method and then perfecting it the following week. 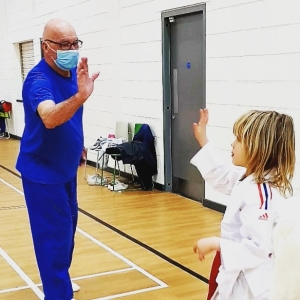 He was thrown over shoulders, which didn’t go too well, and he was rolled across the mat, which enticed giggles, and he did breakfalls off the big pumped up ball.

When Rhys wouldn’t do bear crawls across the mat, we adapted, with him riding on my back, giving me extra weight to add to my strength training. Over the weeks the task evolved with the older judoka each having a smaller judoka on their backs. We were all one. We were adapting together.

Every coach worked with him. None of them having experience of autism or additional needs, just having a love for judo and teaching children something they had a passion for.

For once my son was included. He wasn’t sitting on the side, or being sidelined with a one-to-one. He was part of the class. 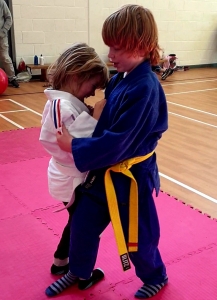 The lead Sensi would watch him and work out which kids he was comfortable with, then pair him up with them. Not only was Rhys included in the session, but the other children were being taught about a boy who saw the world differently. They were shown the power of inclusivity and how it doesn’t just mean finding a way to include everyone, but a way where others learn about different abilities, and embrace all types of people.

Rhys never stayed in one spot for long, but each time he took part in an activity he was involved.

Inclusivity is banded around by many institutions. It proclaims to open its doors for all abilities. However many don’t live up to those promises.

Wisp judo never got extra funding, and didn’t employ a dedicated resource to work with my son. They just taught differently, a way to include all kinds of minds with the one central desire – to teach a skill.

And I am so grateful for what they have done.

We are only seven months in. Give Rhys another few years and with the amazing adaptation of judo, who knows what he will be achieving.