The New Mexico Tech rugby program did it again, toting home another national title after rampaging through the small-school College Rugby Championships on Memorial Day weekend in New Orleans.

But this one, despite avenging a December loss to rival Christendom College with a 26-10, come-from-behind win in the finals, is rather bittersweet.

Coach Gearoid Dunbar announced he is leaving Tech to take over the rugby program at University of Mary Washington, a Division 1 school in Fredricksburg, Virginia.

“Thank you to everybody from Socorro, and all of our sponsors in the town,” he said. “We’re a small-town team and everybody in town got behind us.”

Dunbar will be greatly missed, Tech President Stephen Wells said in a statement.

“He has helped build and lead our team in its successful national championship. We thank him for the energy and enthusiasm he has brought to our rugby program, which will continue to grow and thrive next season,” he said. 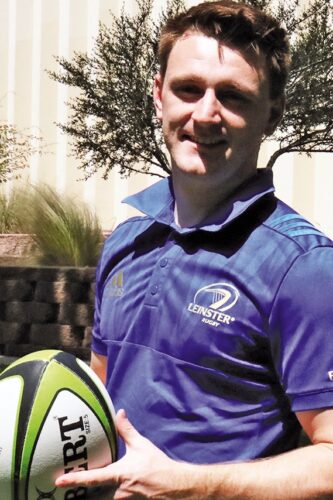 Coach Gearoid Dunbar announced he is leaving Tech to take over the rugby program at University of Mary Washington, a Division 1 school in Fredricksburg, Virginia.
file photo

Dunbar came to Socorro three years ago to take over a non-descript Miners rugby program.

And he quickly turned the program into a powerhouse that ended up within the past two months winning national championships in both 15s and 7s formats, referring to the number of players per team.

“We went from a small-town team that was trying to get competitive to the No. 1 small-college team in the country,” Dunbar said. “I’m delighted with them and I’ll miss all my boys, but I’ve taken them as far as I can take them.”

The Miners program is such that it should be able to attract a quality coach to continue the team’s run, he said.

“I’ve been thinking about this: New Mexico Tech is like a giant ship,” Dunbar said. “I was the harbor pilot, the one who got the ship out into the ocean. Now it’s up to them to continue to go wherever they want to go.”

He told the players several weeks ago and, “it was very heartbreaking but I’m happy,” he said. “There were a lot of tears (Monday). It’s very hard to leave them, especially after winning two championships. But it’s not like I’m abandoning ship at all.”

And the players knew that their success was eventually going to have a price.

“It’s always sad when you have someone who comes in here and impacts your community and then leaves,” said senior Elijah Naranjo. “He’s the reason why I’m playing rugby. He’s brought a whole perspective and knowledge of the game and what it’s all about. His background and coming in here from one of the best programs in the northern hemisphere and teaching that and bringing that culture here is amazing.”

And seeing Dunbar move up the ladder is satisfying, Naranjo added.

“He deserves it,” he said. “He loves rugby and he’s going to continue to grow it. He’s going to do great anywhere he goes.”

As for the Miners, Naranjo said he’s got one more fall semester with the team and he doesn’t anticipate any drop off in the team’s performance.

“It’s all about perseverance,” he said. “It’s nothing new for New Mexico Tech. It takes a lot of persistence. We have a community and players that understand how to fight through situations. We’re going to have to learn quickly with a new coach and keep on going. This championship isn’t the peak; it’s just another mountain we conquered and now we have to go climb another one.”

It was that perseverance that helped Tech overcome the Crusaders in the final game, capping a perfect 7-0 run in which the Miners outscored opponents 163-65.

“It was a picture-perfect situation because perseverance really describes what we had to go through,” Naranjo said. “Perseverance was the biggest thing for us. As a small school, we have to fight harder than everybody else. We don’t have the facilities other places have, and we lost a couple of people a week before we left, and other people had to step in. So it was a huge team win, like any other win that we had. A lot of guys stepped in and started, and we just kept our heads up and went on to the next play and the next play.”

What really helped is the team was supported in New Orleans by a number of alumni and former players, he said.

“It feels great to really do something like this for the school, get another one,” Naranjo said. “This one feels a bit better than the last one because we got something back that we didn’t get in December against the same team. And it was an amazing trip to have the community we had show up. We had a lot of alumni there. That’s what put New Mexico Tech and Socorro on the map and to keep it going and expanding the program. We’re a small school with some big degrees in our education, but we can go out and do more than just have our heads in the books.”