The 1960s were undoubtedly a time of automotive alchemy, but it can be easy to forget that the memorable muscle cars of the day required a fair amount of muscle to maneuver, and an equal amount of endurance to drive. A machine that married the bygone beauty of that era’s edgy aesthetic with contemporary power, performance, and safety features would potentially be a four-wheeler for the ages. Fortunately, Tom Scarpello and his team at Florida-based Revology Cars have done just that with their latest creation—the Revology 1967 Shelby GT500.

“I’ve always had old cars—my first car was a 1965 Mustang—and I’ve been tinkering with them for a long time. And for me, the thing that was a drawback was the way they drive,” says Scarpello, Revology’s founder and chief executive officer. “I started experimenting with late-model technology in earlier cars as far back as the 1990s.”

A 30-year veteran of the industry, Scarpello formed Revology in 2014 and fine-tuned his focus toward modernizing Sixties mustangs as reproductions—including a 1966 Mustang GT Convertible, a 1966 Shelby GT350, and a 1968 Mustang GT 2+2 Fastback. But his most recent release, a reimagined GT500, is destined to be a contemporary classic.

“The 1967 GT500 was the last Shelby Mustang that was built at the Shelby facility in Venice, Calif.,” says Scarpello. “For the first time, Mustang got a big block engine – a 428 – the highest performance engine that had ever gone in the model. And so for collectors, the ’67 is pretty special for that reason. We take this platform that was developed 50 years ago, and we redesign it for improved functionality while keeping the theme—the basic architecture and looks of the original car.” 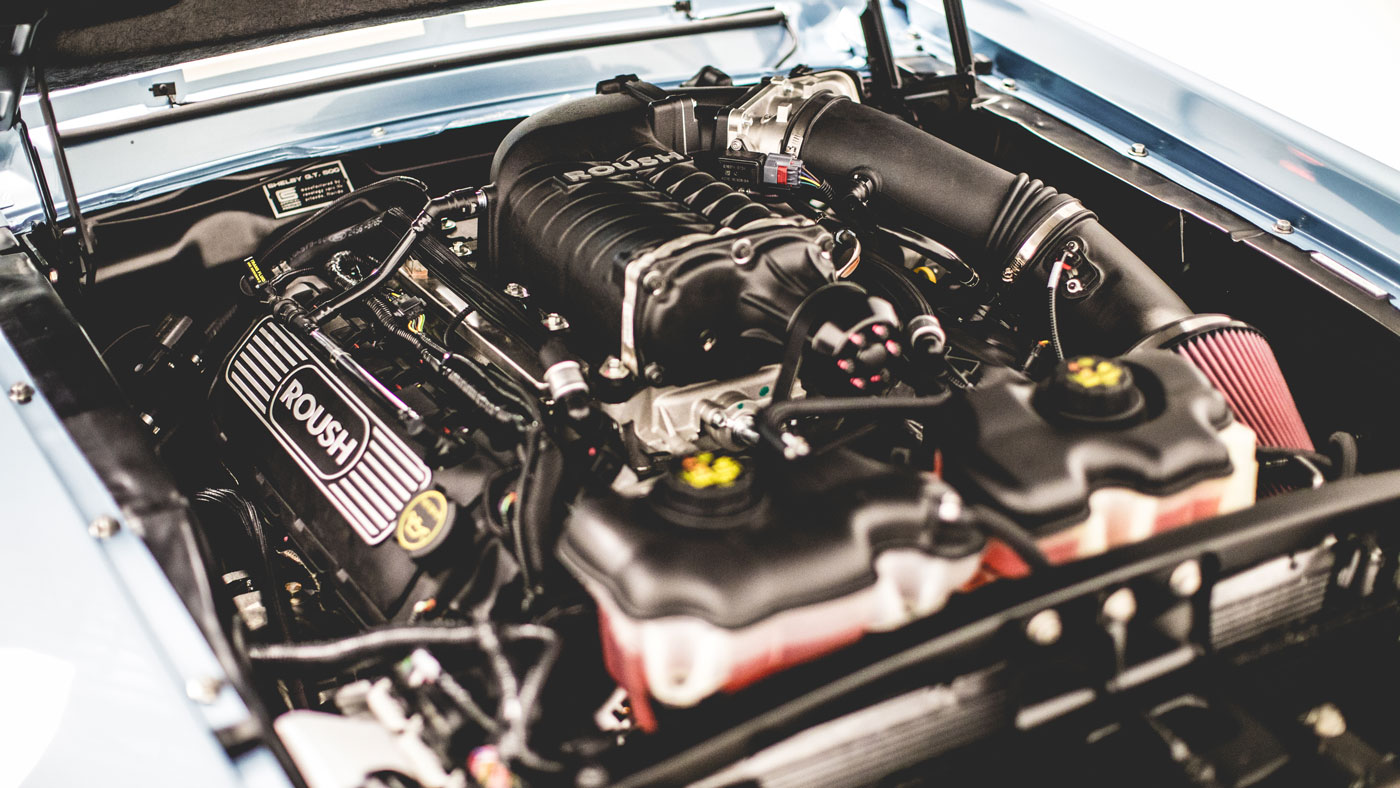 Hidden under the hood is a 600 hp, supercharged 5-liter V-8 engine from Roush Performance.

“I was really proud that we were able to get the 600 hp, supercharged Coyote engine packaged into the ’67 body without having to modify the hood. That was the greatest challenge specific to our GT500,” Scarpello explains. “Also the cooling system. We always try to use as much OEM hardware as possible, and we were able to package just about everything. It has the factory radiator, cooling fan, and cooling system—and that just gives the customer so much more because everything in the car is designed together and we’re not piecing in a lot of parts from unknown sources.”

Safety takes a front seat with features that include a steel trunk floor separating the occupants from the fuel tank, a steering column with collapsible shaft, three-point harnesses, and four-wheel disc brakes. And as far as creature comforts and convenience, the car’s interior is dressed with a brushed-aluminum dashboard and trim, a Shelby wood-rim steering wheel, and leather Shelby sport bucket seats. Also presented are some of today’s top tech, such as Bluetooth connectivity, power windows, and remote keyless entry. 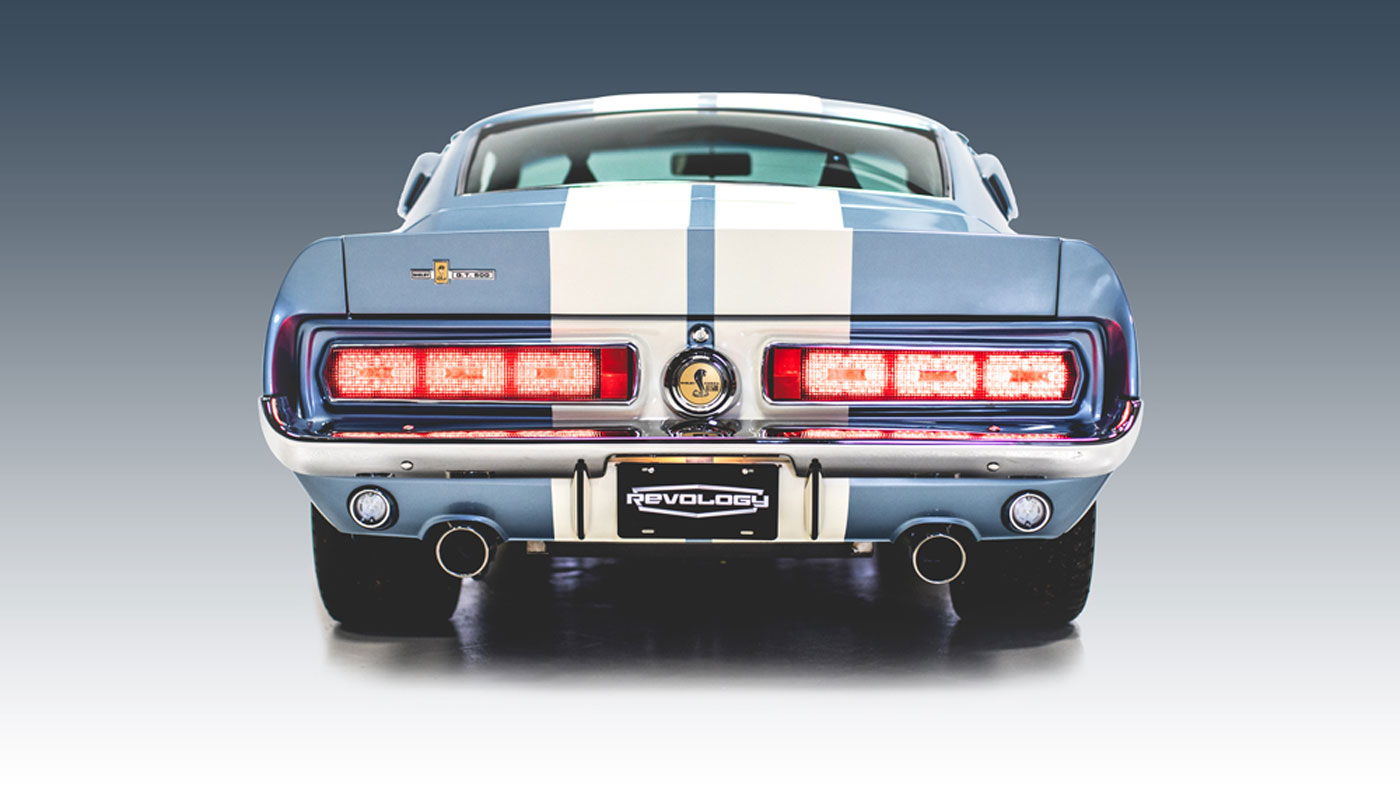 Ultimately, however, it all comes down to the drive experience, which Scarpello describes as a bit mind blowing. “If you know how the original cars drive, the Revology car just doesn’t compute in your brain, initially,” he says. “You ask, ‘how can this old car accelerate, stop, and turn so quickly—be so quiet and refined?’ Well, because it’s not on an old car. Your brain is telling you that it’s something it’s not—that’s the cool thing.”

Debuted this past October at the Specialty Equipment Manufacturers Association (SEMA) show in Las Vegas, the Revology 1967 Shelby GT500 is available at a starting price of $219,000.