The program has plenty of skills instruction for newcomers and fun games run by the Manchester High School Varsity coaches and their players. The program is absolutely free and open to boys and girls. Loaner sticks are available to all participants. After the initial session, the program take place every Monday from 5 to 6 pm with the following dates and locations: June 24: Livingston; July 1 and 8: West Turf; July 15: Memorial Turf; July 22 and 29: West Turf; Aug 5: back to Livingston. 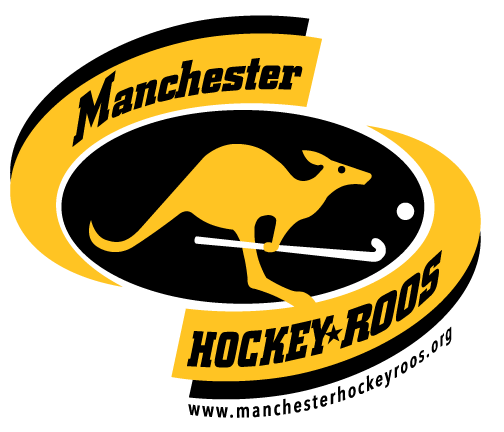 The Manchester Hockey Roos Summer Jump! Field Hockey Program starts up again this June 17 on the Turf at Manchester West. This program is all about giving newcomers a chance to try field hockey in the easiest way possible: the kids are loaned sticks and shin guards, qualified coaching is provided, and it all is happening on a city field right here in Manchester on Monday nights.

For those who have never tried the game before, it is an easy and free way to see how they would like the game. For those who have experienced one of the Hockey Roos physical education classes in a city elementary school and want to learn more, this is also a great way to build on that PE class. And for those who already play at their middle school or on a club, it is another opportunity to get some stick time and have fun with the game.

Having a strong community-based program like Hockey Roos introduces the game to a younger audience thus growing the game at the middle school. It also continues to support those athletes in middle school who want to play more and bring a friend, but need a local option to make it possible.

It should be understood that this program is for anyone in the district and is a collaboration between the city high school and local college coaches so all the programs in the city will benefit.

And yes, the intent of Summer Jump! Is fun. Skills and rules are taught, but the emphasis is to quickly find ways to put those skills into play with various games, races and competitions many of which are cooperative games.

First off What is Manchester Hockey Roos?

Who is the target audience?

Any athlete, boy or girl, from fourth through eighth grade who would like to try the game of field hockey.

How does Hockey Roos work?

Our success is based on reducing or completely eliminating the barriers to trying the game. We have free loaner sticks and shin guards, we secure free field time, the coaches all volunteer their time, and we even sometimes bring the program to you! Show up, parent or guardian signs a waiver, here’s a stick, here’s a high school player to teach you, step out onto the field and play.

What are the Hockey Roo programs?

We have several programs: in school, after school, Summer Jump, Fall Hop, and a camp. All but the camp are entirely free of charge. We’re here today to specifically promote our Summer Jump program.

When and where is Summer Jump?

Summer Jump is six sessions of one hour of intro to field hockey this summer. Mostly on Monday nights at West’s Turf field from 5 to 6 pm or at Memorial’s Turf Field or at Livingston Park. See the schedule here.

What happens at Summer Jump?

Once the newcomer has a stick, a ball and a couple of new friends to play with, we teach a few basics, some simple rules, and then we play a bunch of different games. From relay races to small-sided games with goals. By the end of the six weeks, everyone should know the basics, have learned some rules, and really, really want to play at their middle school.

So when Summer Jump is over, where does the interested player go from there?

Why did you start Manchester Hockey Roos?

Enlightened self-interest to create a stronger feeder system for the high school and middle school programs.

Why the Kangaroo Logo?