National Gun Violence Awareness Day this year fell at a time where the United States is still mourning several recent mass shootings. In Chapel Hill, community members and local elected officials gathered Friday to recognize those affected by gun violence and to call for reform.

While the rally at the Peace and Justice Plaza has taken place in years past, the murders of 21 people at an elementary school in Uvalde, Texas, and other recent acts of gun violence added a level of gravity to the program.

Two of the few dozen people standing at East Franklin Street were Durham residents Sandy and Skip Polson. Sandy held a handmade sign that read “I want my country to love country more than guns — Ban assault weapons.” She said she was inspired to create it based on prior signs she saw a child holding in a previous rally.

“I’m a retired teacher,” Polson told Chapelboro. “I used to have to walk my children through lockdowns. It’s very scary to just do that. And I cannot even imagine what these children and families have gone through in Uvalde.”

The Polsons each signed a petition shared by the organization North Carolinians Against Gun Violence at a booth on the plaza. The petition calls for the state’s General Assembly to maintain its pistol permitting process, ban assault weapon sales and enact red flag laws for gun purchases.

“It’s so sad that our senators, our legislators are not doing anything to change [the rate of gun violence],” said Sandy. “It’s crazy that our country is the only modern country with this problem.”

Additionally, members of the Chapel Hill Police Department raised a new solid orange flag to the flagpole at the Peace and Justice Plaza: a tradition with the rally each year. Orange is the color now associated with honoring gun violence victims and advocacy for gun reform, which many of the rally’s attendants wore. 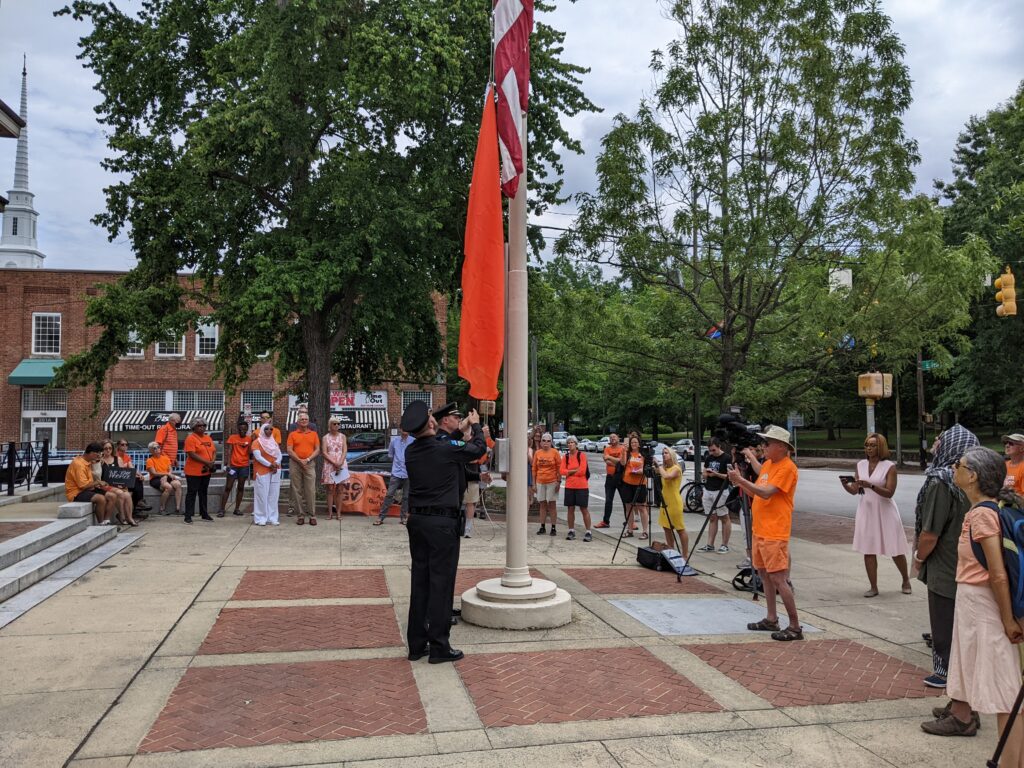 Members of the Chapel Hill Police Department raise a new orange flag at the flagpole of the Peace and Justice Plaza on East Franklin Street to recognized victims of gun violence.

Wesley McMahon, a volunteer board member with North Carolinians Against Gun Violence and a Chapel Hill resident, told the crowd he was wearing a shirt made in the wake of the Parkland school shooting in 2018. He said the fact the shirt’s message of “enough is enough” still rings true reflects how the lack of gun reform is a systemic issue.

McMahon also told Chapelboro it is a reflection of why his organization works to keep such tragedies at the forefront of conversations so people avoid getting desensitized or moving on.

“There are so many people dying in communities and families across this country we don’t even know about,” he said. “Part of our work is to shed light on all of the people out there that are affected.”

McMahon likened the fight against gun violence and for gun reform as both a marathon and a relay race. He said it’s important to recognize that the burdens of action and leadership can be tiring, but rallies like Friday’s help others take up the baton of change.

“It’s a lot of work and so there are people who do very little, but that’s still a lot [to enact change,]said McMahon. “Make one phone call, donate one dollar, write one letter — that is helpful.”

Friday’s gathering is not the only recent demonstration seen in the community to call for action against gun violence. Students at Chapel Hill High School participated in a national walkout of class for 21 minutes on May 26 to honor those who died at Robb Elementary School in Uvalde.

According to the Centers for Disease Control, North Carolina ranks 21 of the 50 United States in death rate by firearms. In 2020, the state recorded 1,699 total deaths. The entire United States suffered 45,222 deaths, which the CDC says is the highest number recorded since it began tracking firearm deaths in 1968. A Johns Hopkins University report also found that 2020 marked a record amount of firearm sales and that gun violence was the leading cause of death for people under age 25.

Chapelboro.com does not charge subscription fees, and you can directly support our efforts in local journalism here. Want more of what you see on Chapelboro? Let us bring free local news and community information to you by signing up for our biweekly newsletter.