When storms delay, the gator comes out to play…

Let’s start right up front with the big results from another of several consecutive weekends of season-ending championships.

This “Week that Was” that meant heaps of racing and meeting the new:

An extra special passenger coming home with us! pic.twitter.com/8XJ9u6tY7U

You can find all of row2k’s coverage here, but if you missed all the social media from Sarasota somehow, the shorthand version goes like this:

Team titles to Texas in D1, Mercyhurst in D2, and Wellesley in D3–with the Bates 2V, Princeton V4, WPI 1V and Yale 2V shaking things up, with event wins that didn’t go to the team champs.

All in all, it looked like Champ Camp worked out pretty well:

And it was not a comeback: Wellesley, along with Texas and Mercyhurst, as it happens, were pretty much the favorites throughout the year, but that didn’t make the racing any less exciting.

The SRAA Champs crowned a news set of champs as well: congrats to Andrew Weaver (Haverford HS) and Llian Reidel (Ridgewood HS) on winning the singles and Winter Park HS Girls and Wilson HS Boys for winning the eights.

Your SRAA Champs in the fours and quads? The Blair Academy Girls and the Orchard Lake St. Mary’s Boys in the Varsity Fours, and the Haverford Boys and Conestoga Girls in the Quads. 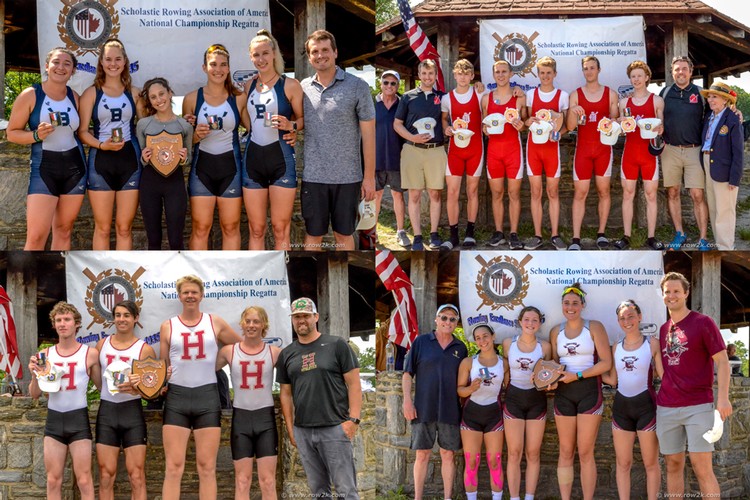 Lots of SRAA champs in the doubles, lightweights, and junior/freshmen boats too, of course: all available on the results page and in the row2k gallery. The post-race celebrations got epic as well, as you can see in this Tuesday’s Video of the Day of Wilson’s stern pair doing a “Dap-n-Dive”–looks like US crews are starting to go full-Dutch when they win . Everybody in the water.

Winning the first World Cup is a good way to take the lead in the three race series.

Nabel won as the lone US entry at Belgrade World Cup–now if only there was an Efficiency Trophy!

Switching boat classes–back to the double–but the brothers will be keeping the medal color the same, thank you very much.

Without question though, NCAAs–as the monster regatta of the weekend–kicked out the most to catch up on, even if we don’t bore you with all the awesome rain delay gator pics (keep clicking if you go look, though –they just get better).

Getting the Boot (Right)

The start boots at Sarasota are new to many athletes, but–to their credit–most were not phased by all the gesturing needed to get the bow into the boot: 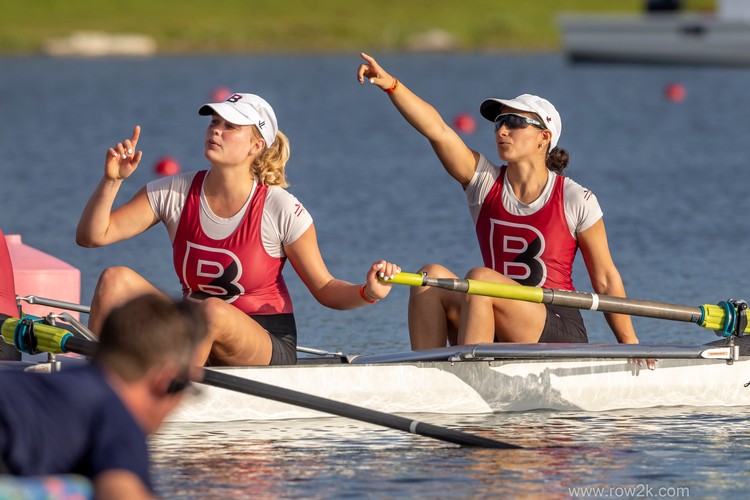 As you can see here, this ended with a thumbs up, as did Williams’ “booting”, but these pros in the Cal four was clearly psyched to get it on on the first try: 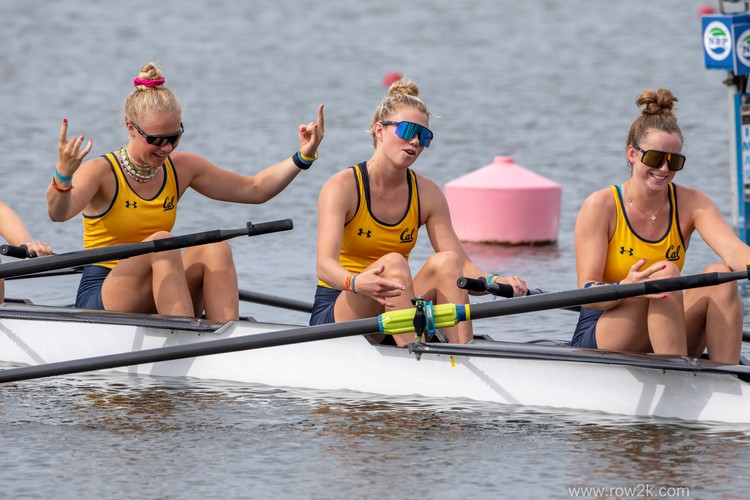 Getting the Boot (Wrong)

Keen-eyed fans noticed: the start dock pics were not up to the standard that row2k has been able to hit at the Olympics, Worlds, and literally every other regatta both in the world and here in Sarasota–because media have been booted from the start dock at recent NCAAs.

Why is it hard to photograph without dock access? Well, here’s a couple of examples–and the better the start line infrastructure, which is great at NBP, the trickier it gets: 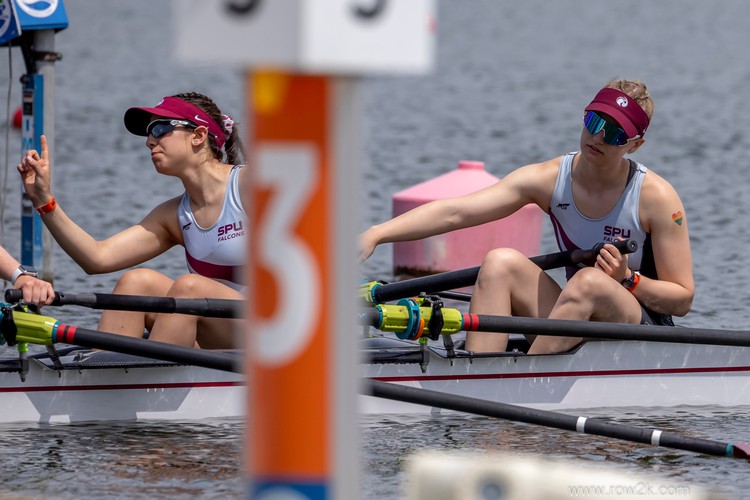 And then, you have a fraction of a second to get all five of these athletes:

If that were an eight it probably would have been impossible to get the photo, and Bow Appreciation Week it would not have been,

We decided on Wednesday night to send a second photographer for the Friday morning heats; it took some scrambling and $$ but we got it done; Hopefully the photos are better for it.

The Best Bucket Award Goes to…

…and to good effect: we believe this was the crew that won the “2 bucket vs 1 bucket” show down with Michigan in the heats to head straight to the Semis. 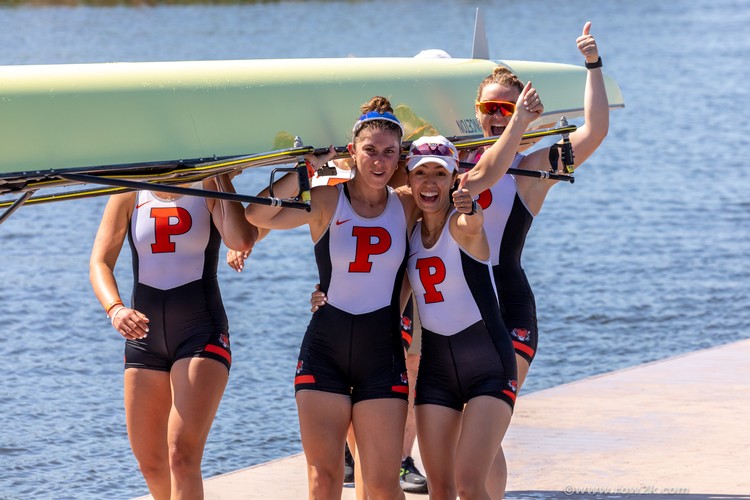 …and the Best Blades?

Nothing like being told to be unstoppable by a few alums who just happen to be NCAA champs and/or Olympians themselves.

Stanford would go on to finish second overall as a team, and in the V8 and 2V8, for the second year in a row.

And Some Hefty Mileage

Commentators Lindsey Shoop and Dave Wyant, their mini car, and a reported 114 miles back-and-forth on the wave attenuator.

Getting the Shot Right, Part 1

Before we mentioned it: 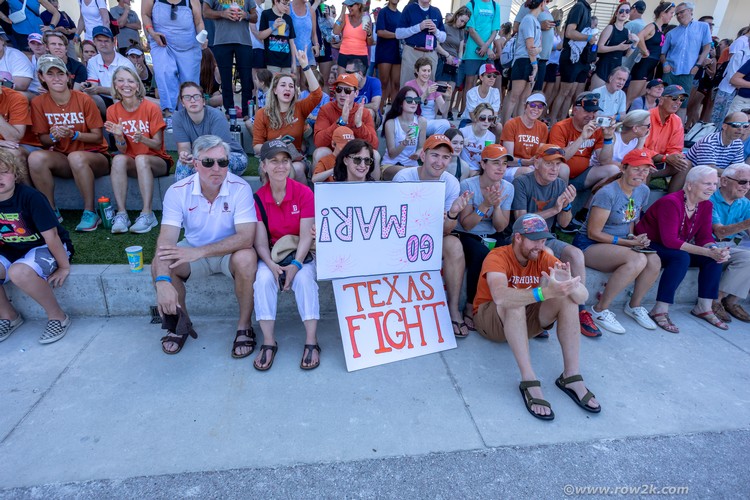 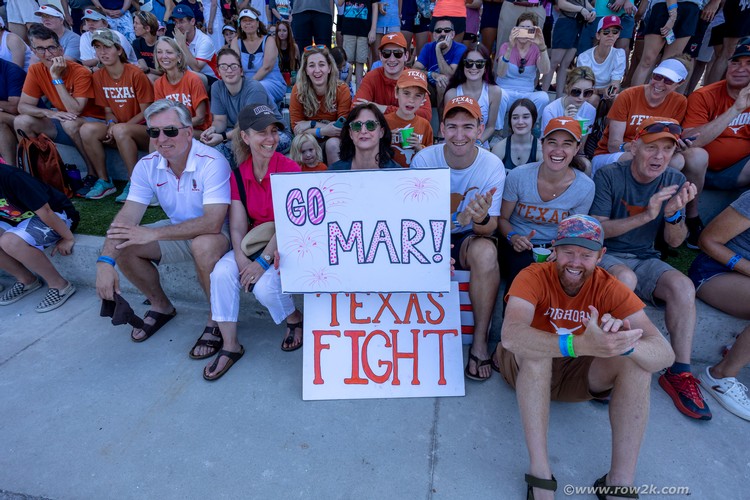 No word on what happened to the punctuation.

Getting the Shot, Part 2

row2k set up a bunch of team photos that also included every parent, grandparent, supporter, really everyone: 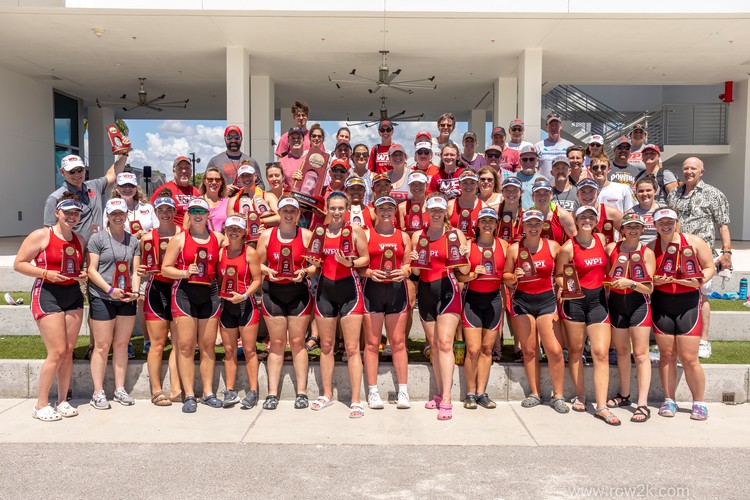 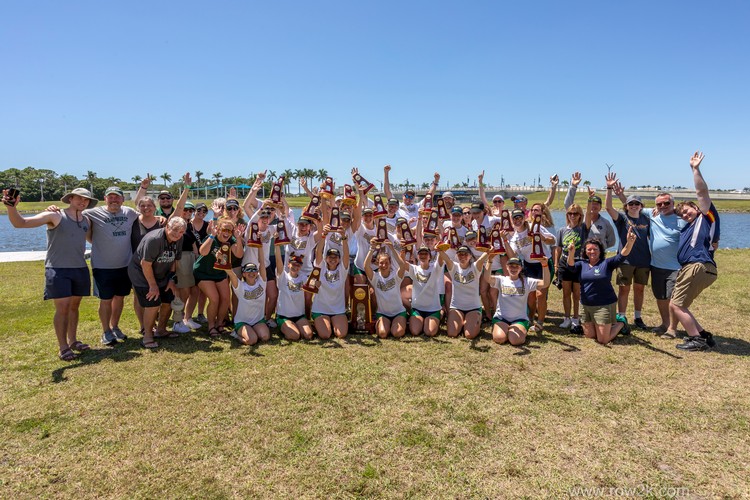 You can see more “all everybody” shots here: with Wellesley and with Texas.

Who did it better, Dave O’Neill above, or the Mount crew at Stotes? You would take a leap like that too after the second of two back-to-back NCAA Championship programs–Cal in ’05 and’06 and now Texas in ’21 and ’22–and he sure committed to the full-layout -flop here (which is also becoming a thing). 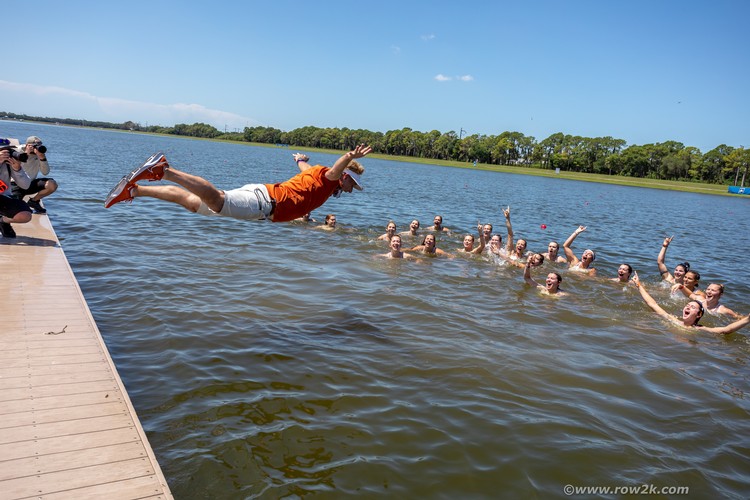 You can catch the whole sequence, through splashdown, here — or watch it on video via the @TexasRowing Twitter,

There were a few other things from the week that was:

Check out these items you may have missed this past week: