A beautician and internationally renowned break dancer has revealed the extreme lengths she goes to in order to keep her body in peak condition after a devastating injury threatened to cut her career short.

London-based Anna Ponomarenko, 27, originally from Ukraine, was warned she might never be able to break dance again after she suffered extensive nerve damage five years ago that left her ‘unable to move from the shoulders down’.

Anna, known as B-Girl Stefani when performing, was able to slowly rehabilitate herself and now takes extra care to avoid a repeat injury.

Anna Ponomarenko (pictured), known as B-Girl Stefani when performing, started breaking when she was just 14-years-old and eventually trained a staggering seven hours each day ahead of competitions – as well as avoiding all junk food and takeaways 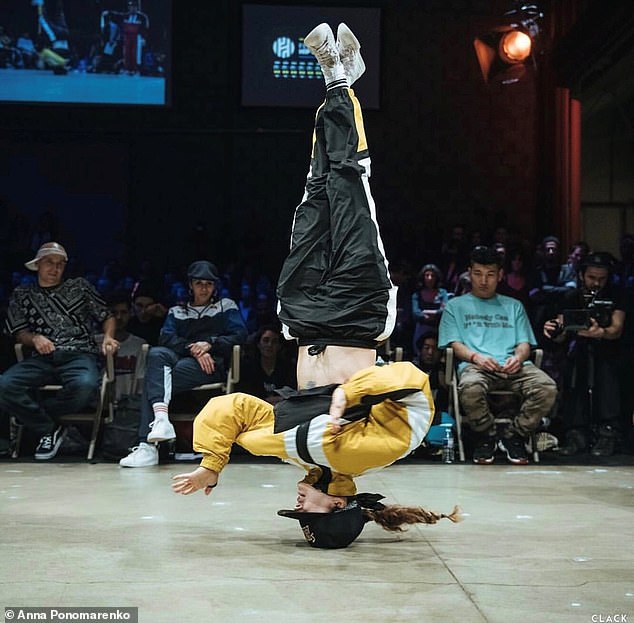 But aged 22, the now married 27-year-old (pictured) from Ukraine but currently based in London, woke up one morning to discover she could no longer move ‘from her shoulders down’ and was warned by doctors she would never perform again 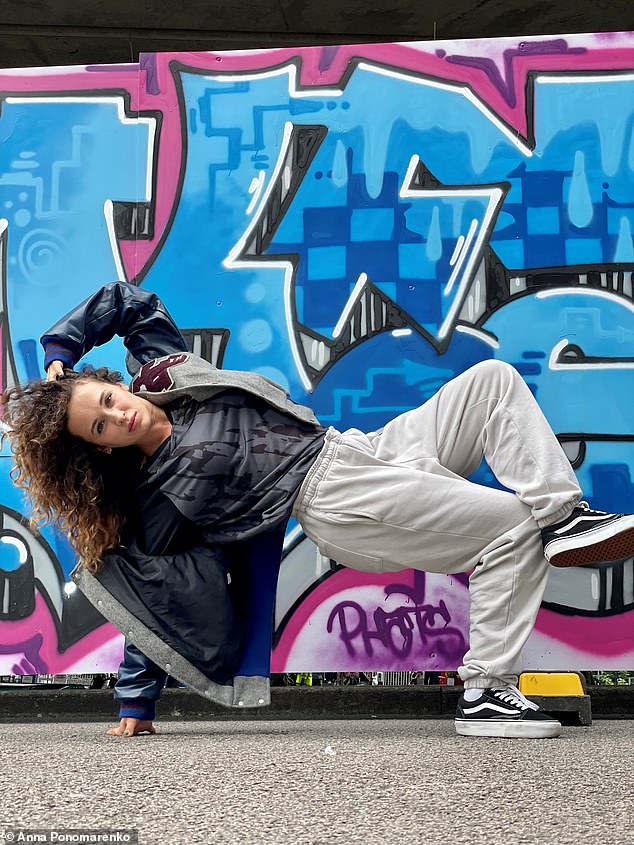 However, thanks to her hospital treatments and cutting back her training to include three 5k runs, three full-body workouts and a swim each week, the beautician (pictured) is now back performing – having competed at this month’s Red Bull BC One World Final

‘It had been building up for a long time whilst training and I woke up one morning and couldn’t move from my shoulders down,’ she recalled. ‘I just screamed. I had to go to the hospital and was told I could never dance again.

‘When I first woke up and felt like I couldn’t move, I just felt fear run through my body. It was the scariest moment of my life, there were so many thoughts running through my head – I just didn’t know what to do.

‘When the doctor told me that I would never dance again… I just refused to believe it. I thought it was all about my mindset, and that the pain was temporary and I’d feel better soon.’

Anna started break dancing at 14 years old and now competes in international competitions, including the recent Red Bull BC One World Final. 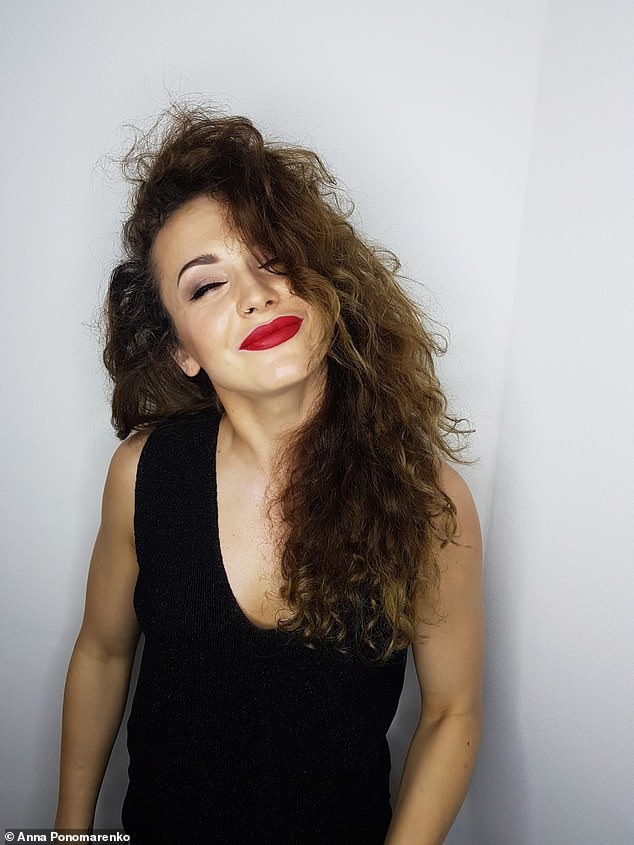 Speaking to FEMAIL about her injury, Anna (pictured) said: ‘When I was 22, the craziest thing happened to me personally, I was [unable to move] due to nerve damage’ 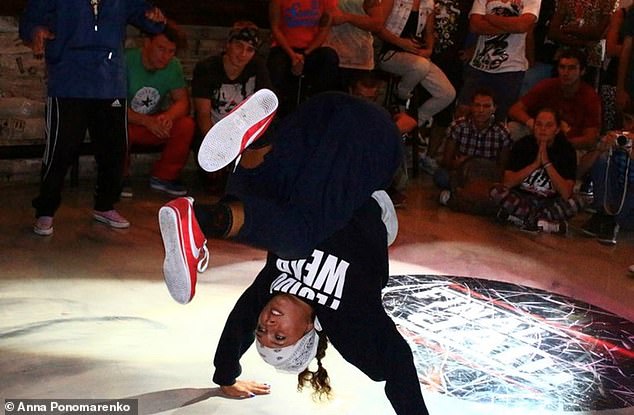 Discussing the cause of the nerve damage, Anna (pictured) said: ‘The doctor thinks it was just a prolonged strain on my neck and shoulders from training so often.’ 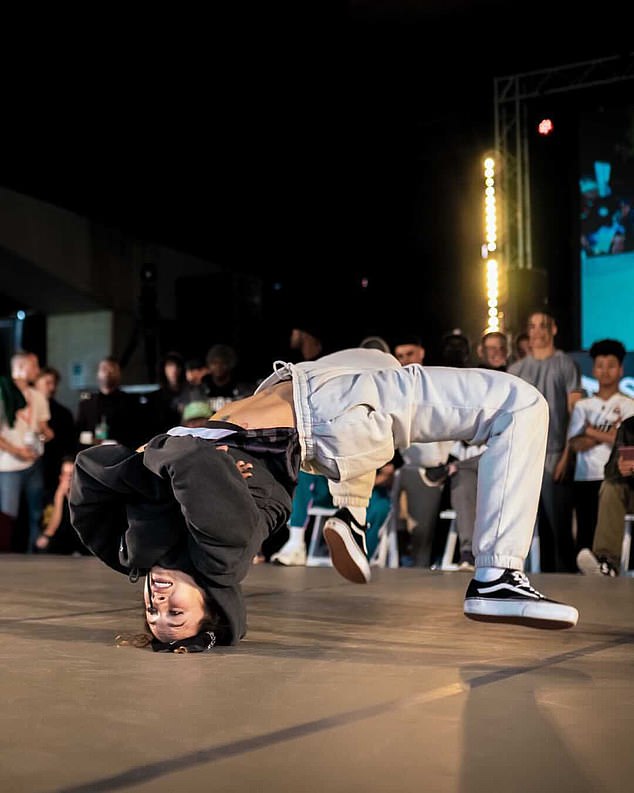 Since cutting back her training, the break dancer (pictured) now does a general full body workout at the gym for an hour and a half, as well as a five km to seven km run, three times a week, plus an hour-long swim every week

The 27-year-old used to train for seven hours a day, but reduced it to a more ‘manageable’ three hours following her injury, which medics believe might have been caused by a prolonged strain on her neck and shoulders from extensive training.

Anna recovered slowly in hospital, with frequent treatments – including both electrotherapy and physical therapy.

‘It took me a long time to get my strength back and train as hard as I wanted to, but I would push myself every day,’ she said, adding: ‘I’m so terrified that it could happen again, every time I dance the fear runs through me.

‘I try to focus all my energy on performing the skills accurately and training properly, sometimes I pinch my nerves when training and it hurts but I know how to handle the pain now – the recovery is a long road and I think it’ll be something I always live with.’

She continued: ‘I change my training routine every month. I think it’s key to have variety in order to stay at the top of my fitness game.

‘I train seven days a week, some days are more intense than others – I like to keep my body moving at all times to reduce the risk of injury when breaking.

‘I start with a stretch and simple workout in the morning, then will practice breaking in the evening after work.’ 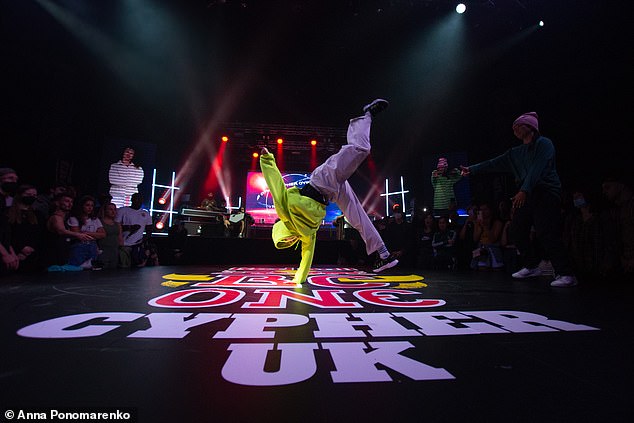 Anna (pictured) says her work as a beautician feels like ‘rest time’ as she’s usually sitting down and chatting to her clients, who often don’t expect her to have a career in breaking as well 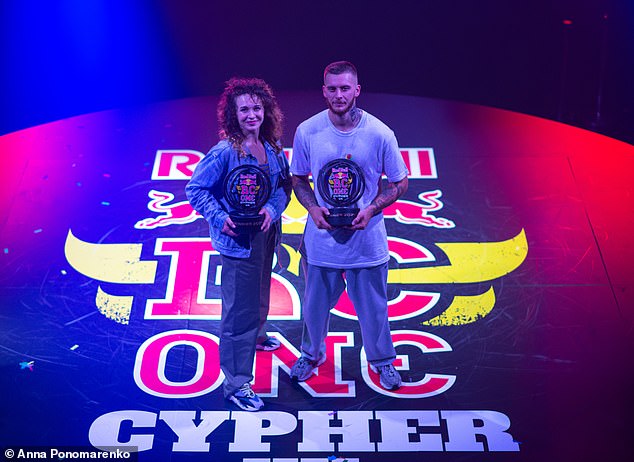 Anna (pictured left) recovered slowly in hospital, with frequent treatments – including both electrotherapy and physical therapy

She added: ‘I never eat junk food or any fast food. I like to eat healthy. I only cook for myself so I know exactly what is going into my food and what is fueling my body.

‘For breakfast it varies, I like porridge or salmon and avocado. For lunch, I mainly eat sushi or fish with vegetables.’

Anna said her work as a beautician feels like ‘rest time’ as she’s usually sitting down and chatting to her clients, who often don’t expect her to have a career in breaking as well.

Discussing her breaking career, Anna said female competitors have to prove themselves ‘more’ than their male counterparts, B-Boys.

‘As a B-Girl you need to train harder to be at your best due to our bodies, because as women, we don’t build the same muscles as men,’ said Anna.

‘It’s hard to be at the same level as B-Boys to compete at world championship level, such as the Red Bull BC One World Finals.

‘I think B-Girls have to train two to three times harder than B-Boys to be able to do the same moves, and there are some moves that are almost impossible for women to do.’ 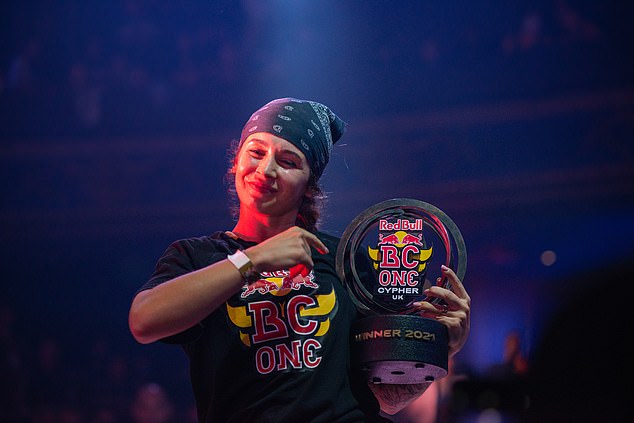 Discussing her breaking career, Anna (pictured) said female competitors have to prove themselves ‘more’ than their male counterparts, B-Boys