You know what there’s a lot of at Austin-Bergstrom International Airport? Art. In diversity of form, in sheer amount, in glorious profusion: art. In fact, there’s so much art at Austin’s major sky portal – whether in permanent installations or in the many changing exhibitions – that the experience might be overwhelming.

or it would be overwhelming if the creativity on display weren’t such a welcome response from the TSA-enhanced rigmarole of air travel as we’ve come to know it. Especially soothing to rest your eyes on an array of large landscapes by Austin’s Jimmy Jalapeeno after you’ve tudged through another security line with your shoes in your hands.

Bonus: You may be on your way to or from anywhere in this whole mad world, but much of the art you’re going to see at AUS is going to represent the local community – what some of the people who live in these parts choose to express about their lives, their physical environment, this great messy miracle of which we’re all sharing the experience. 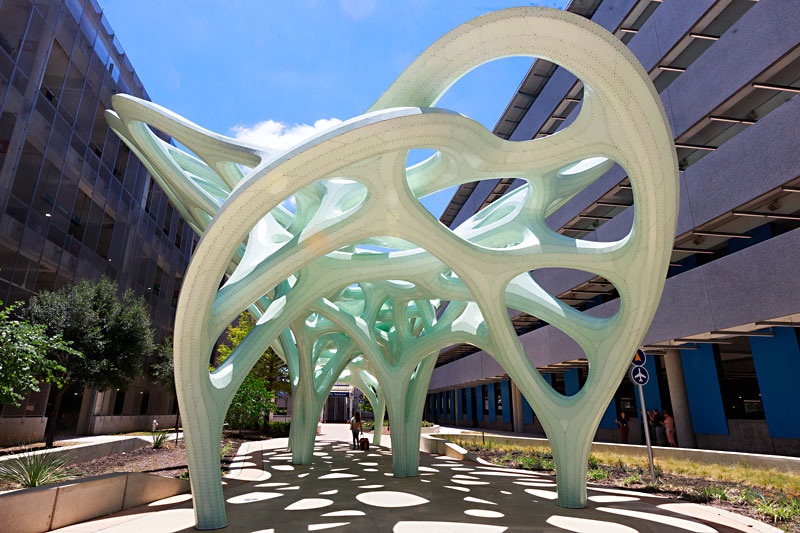 OK, but why is there so much art at AUS? Who’s responsible for this ongoing celebration of creativity? Who pays for all this stuff? How may it be viewed? And where can a citizen pick up a boarding pass to Tatooine or Hogwarts?

Austin’s Art in Public Places (AIPP) program is in charge of the enormous outdoor installations that anybody can enjoy. There are many of them, because AUS is, after all, an enormous, ongoing construction project – and the city of Austin was the first municipality in Texas to make a commitment to include works of art in its public construction projects. So 2% of eligible capital improvement project budgets are reserved for commissioning or purchasing art for those sites. 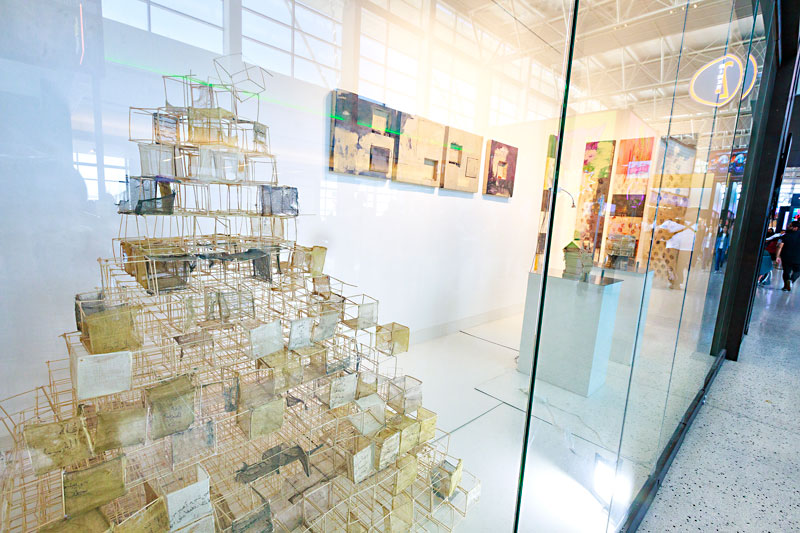 “And we’re racing to keep up with construction,” says Curt Gettman, AIPP senior project manager. “Especially now, with the airport wanting to spend, what, close to 5 billion over the next 20 years?”

That means the program’s got a lot of money to work with, and it’s manifested even before you leave your car in works like Erik Eley’s arresting Shock Egg (2015), bending time and space near the cellphone lot. Marc Fornes’ Meanderwing (2020) sculpture – a kaiju-sized exercise in alien topology – is a sort of “pretzelcoatl” that complicates light and shadow as you walk beneath its soaring curves in the breezeway leading from the surface parking lots. Further on is Michael Singer Studio’s site-specific, deconstructed cityscape called Uplifted Ground (2015) that has cable-suspended blocks of concrete and granite and steel dividing the long walkway on the roof of the red parking garage. More familiar, because it’s been in place since 2006: the eye-pleasing colors of James Edward Talbot’s Transitiona vibrant river run of ceramic, stone, and glass that borders the main pedestrian bridge to the Barbara Jordan Terminal and moves designwise from the Earth to the sun and moon and back again in mosaic brilliance.

Fine use of funding, yes, but – we have more questions. What about the space itself? Does the footprint of an AIPP installation get to take up 2% of the planned area?

“Well,” says Gettman, “that’s open to negotiation between the stakeholders and the artists involved.” 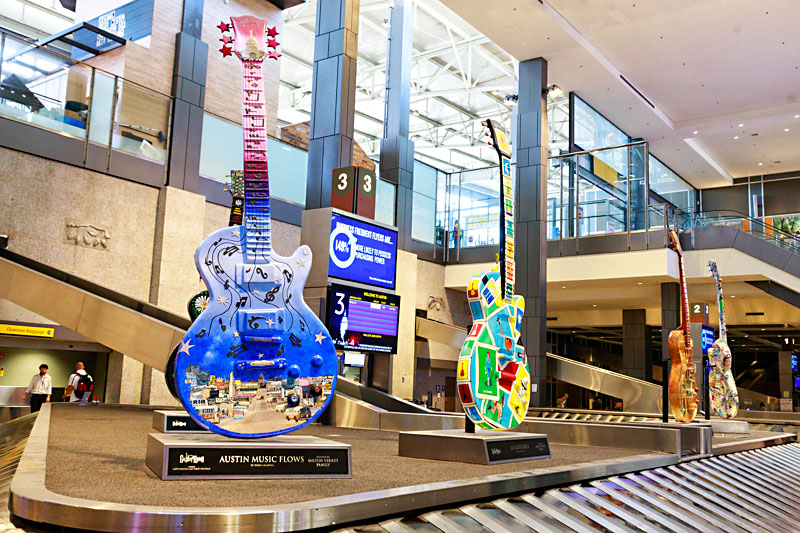 some of those Eight Big Guitars

And that vibrant Transition was created by the local ceramicist Talbot (famed for his Casa Neverlandia), but those newer installations were created by folks who aren’t even Texans?

“AIPP is not just having international and national artists do work,” says Gettman. “There’s also a sensitivity to make sure we’re creating opportunities for local talent. … We have more stuff coming that’s funded by AIPP for [the Barbara Jordan Terminal] – Joseph Christopher Letty, Beili Liu, and Kat Quay are the next artists in there.”

So AIPP is also responsible for some of the art inside the buildings, like Bruce Wolf’s True Patriot (the Barbara Jordan memorial statue) and those Eight Big Guitars. Like the Austin Downtown Cruisersgiant aluminum spaceships constructed by Young-Min Kang from images of the city’s buildings, and Sandra Fiedorek’s To Parts Unknown, a series of 11 murals over baggage claim. And – where you can actually get those boarding passes to Tatooine or Hogwarts or Tlön, Uqbar, or Orbis Tertius (and Oz and Innsmouth and New Crobuzon and Narnia, and more) – Janet Zweig’s In Acceptginary Departures gateway that has its own flight announcements, with seats set at an odd angle to the rest of the building.

Oh, that’s 2%! Of course there’s more art in these public places than there are snakes on a plane. 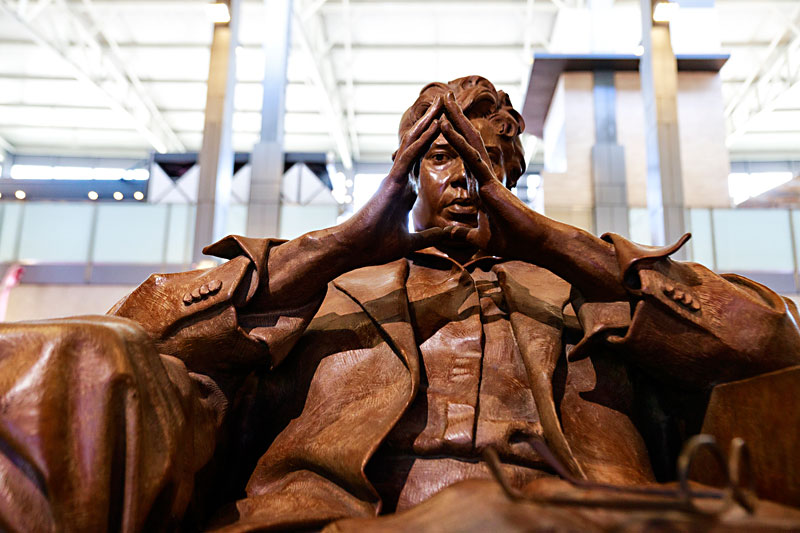 “Airports are different all over the country,” says White. “Sometimes there’s one person who handles the exhibitions and art and music – like Cory – and sometimes you have a hybrid situation, where you have a local arts agency that works with the airport and their team to integrate the program and their projects.”

So here’s AIPP and Airport Art working together, with Hurless in charge of Airport Art. “It’s a strange job, isn’t it?” says she. “I didn’t go to school thinking I was going to work in an airport. My degrees are in art history and anthropology, and my master’s is in museum administration. So I did that for a few years – I was the curator for smaller museums – then I applied here. And there were 80 applicants, and I never thought I’d get it, but here I am. And now it’s been six years.”

In those six years, Hurless has brought a wealth of cultural wonders to this heavily trafficked venue. Not even mentioning all the live music bookings, her impact can be seen most delightfully in the changing exhibitions program that lies beyond the security checkpoints. Currently on view, in the dedicated, built-in window displays along the walkways between gates, are works by Lys Santamaria, the 620 Group, Rehab el Sadek, Sylvia Troconis, and more: the sort of made objects and images you’d see in the best local galleries – because they’re from the best local galleries. Why, there’s even a showcase from the Texas Toy Museum, with little robots and cowboys and gizmos from many a Lone Star childhood. And, within a series of tall kiosks rising from the floor across from Gate 10: the bright creations of Del Valle ISD Visual Art students, grades K-5. 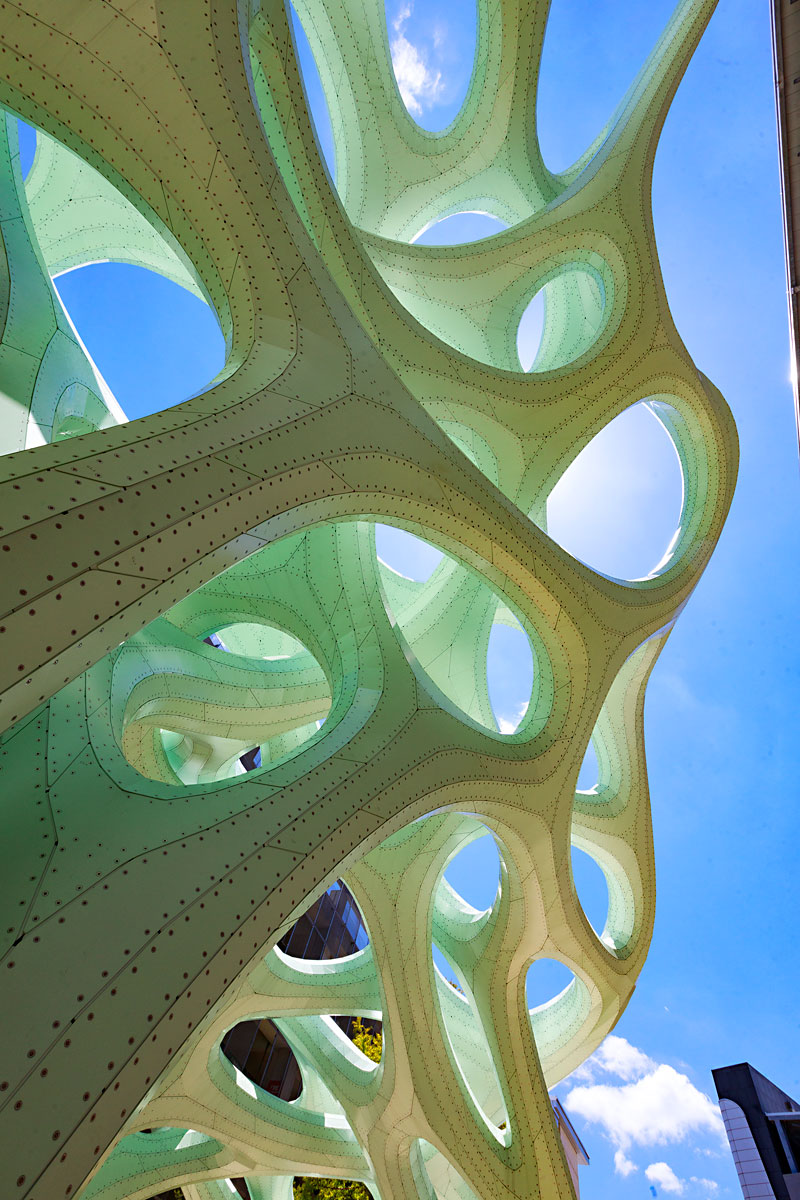 “I spread my art love around,” says Hurless, “so part of my outreach is helping local schools or organizations like La Peña or Six Square. In addition to individual artists, I’m also trying to enhance the cultural offerings Austin has. “

And – just to make sure we’re getting this right – AIPP doesn’t pay for any of that?

“No,” says Hurless, “that’s from AUS, from the actual Department of Aviation. Back when this place opened in ’99, they originally saw it as a venue for people to come and enjoy themselves – that’s how the whole live music program They thought, ‘People from Austin can come here and be entertained.’ And, back before 9/11, that was true: The airport was a place where you could take your date, have some food, watch planes. So they had this inventive idea: Let’s have live music, let’s have art, let’s make it really sophisticated! But 9/11 changed everything. So now much of what you experience is for ticketed passengers – you have to go through TSA.” 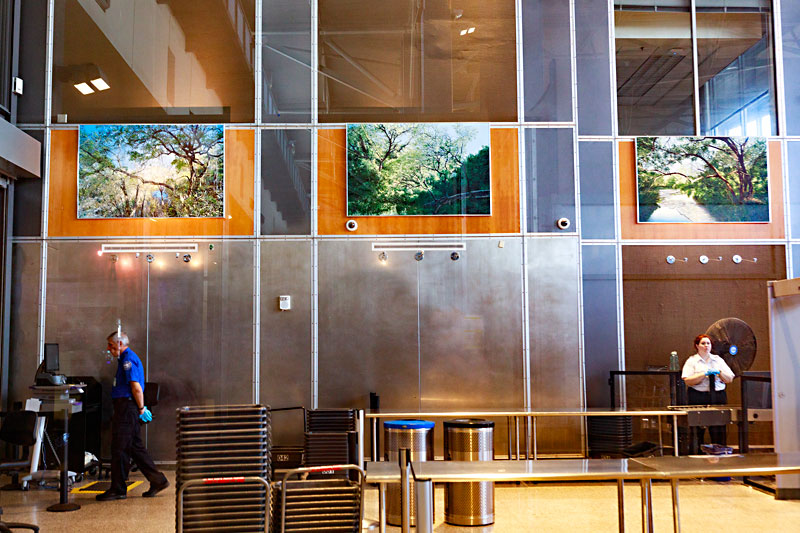 “But, even with that in place, we still have the largest live music program in airports in the US,” continues Hurless. “We have 40 weekly performances. And now you have to come here, what, two or three hours early? And after you’ve gone through the stress of going through security, you can relax and listen to some music and view rotating exhibits from local artists.”

We can relax (well, maybe a little) because these two entities, AIPP and Airport Art, work well together in bringing the culture of Texas, of Austin, to our global gateway. The sky is filled with metal birds and their nest is home to local wonders. But creative collaboration can be tricky, can’t it? Are notes compared, aesthetics debated, when planning a commission or vetting an exhibit, so that the new additions might complement each other and what’s come before? How does that work with the percentage from all those billions the airport’s going to spend? How granular does the process get?

“We have a master plan that we’re expanding upon,” explains Gettman. “We’re going to be finding the opportunities early, to have something that’s thoroughly considered, instead of just going, ‘Oh, let’s do one thing here, let’s do one thing there.’ It’ll be a comprehensive plan.”

“There are a lot of other entry points to that consideration,” says White. “Concessions, real estate operations, and all of that. So it’s a little bit of a balancing act, but sharing voices to talk about intentionality, to think about purpose in all of the spaces – that can be granular.” She smiles like a woman whose flight has arrived precisely on time. “Our goal is not without challenges, sometimes, but we all have one really big priority: customer service, right? We want to contribute to the traveler experience in the most positive way that we can.”

Find out more about the Airport Art program at austintexas.gov/department/art-barbara-jordan-terminal-airport.