Sure, there is a reason to not enjoy a flight if there is a young kid kicking and screaming in your general vicinity. And it’s even more unpleasant if flying is not your cup of tea and if you have ears like a bat where every high- pitched squeal is piercing your soul.

But there are ways around it.

Folks online have recently been having a heated debate on the topic of “adult only” flights after this one woman had to endure one with a kid being super unhappy on board. And just like the topic makes people passionate, the opinions were just as polarizing .

It seems like everyone is aware of the struggles of having kids on board a plane, but who knew a debate about it would be so polarizing

So, TikTok user mooorganic (Morgan) has recently posted a short video of herself on a flight. In the not-so-far-off distance, people can hear a kid—presumably over 5 years of age, according to OP—crying.

The on-video caption asks folks why there isn’t such a thing as “adult only” flights, and suggests that she would pay a lot of money for one.

The description and a follow-up comment elaborate by saying that the flight took 3 hours, and the kid was wailing throughout the entire journey. Morgan pointed out that the kid was well over 5 years old, they were seated directly behind her, not only screaming but kicking as well, all while the mother was sleeping. Morgan even had noise-canceling headphones on. 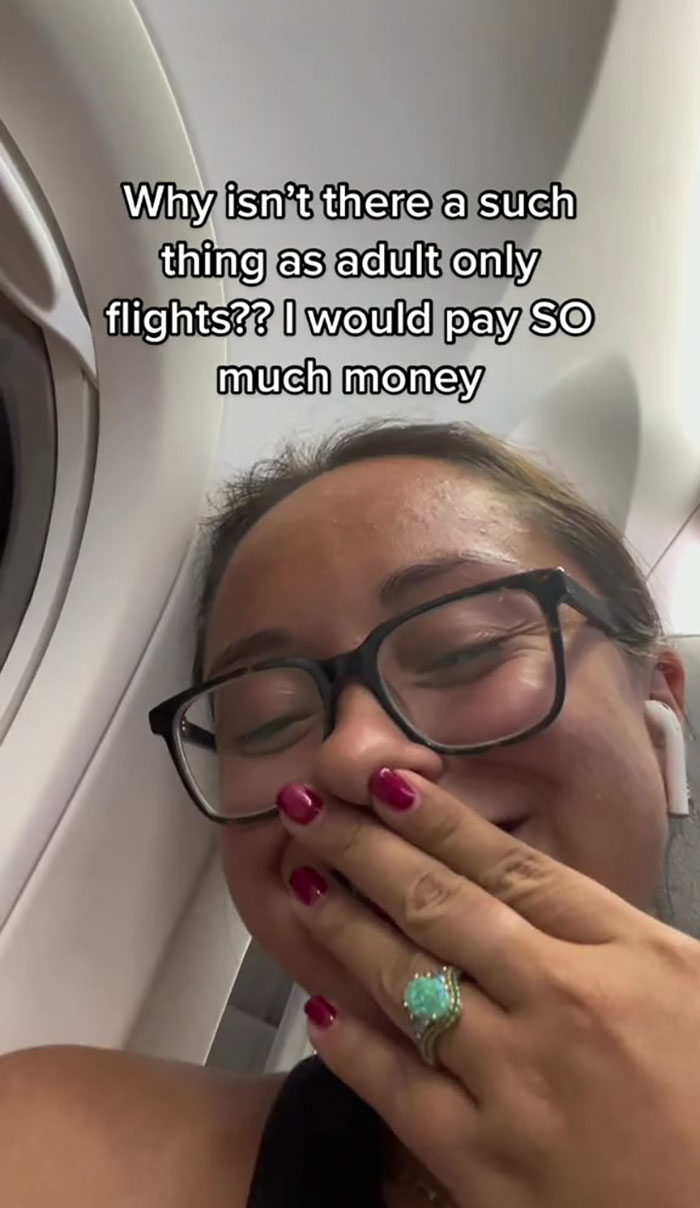 Given all of this, folks had a variety of reactions and opinions about this entire situation. Though you could, for the most part, say there are those who approved, those who disapproved, and those who were there eating popcorn.

On the one hand, Morgan wasn’t alone in wanting an adult-only, or in other words a child-free, flight to be a thing. While Morgan had a 3-hour flight, others lamented their 13-hour flights of the This is besides the hours before take-off and landing with all of the airport formalities where folks can potentially be surrounded by screaming kids.

Yet, others one-upped the idea saying that this could potentially also solve the problem of entitled moms who forgot their headphones and had their gadgets blasting Instagram reels on 100% volume, or attempting to silence their kids by blasting cartoons for them in the same manner.

And the video sparked a huge debate on the matter, with folks taking polar-opposite sides

And while everyone was throwing axes at each other in the comments, this guy pieced together a video of his experience with kids on planes 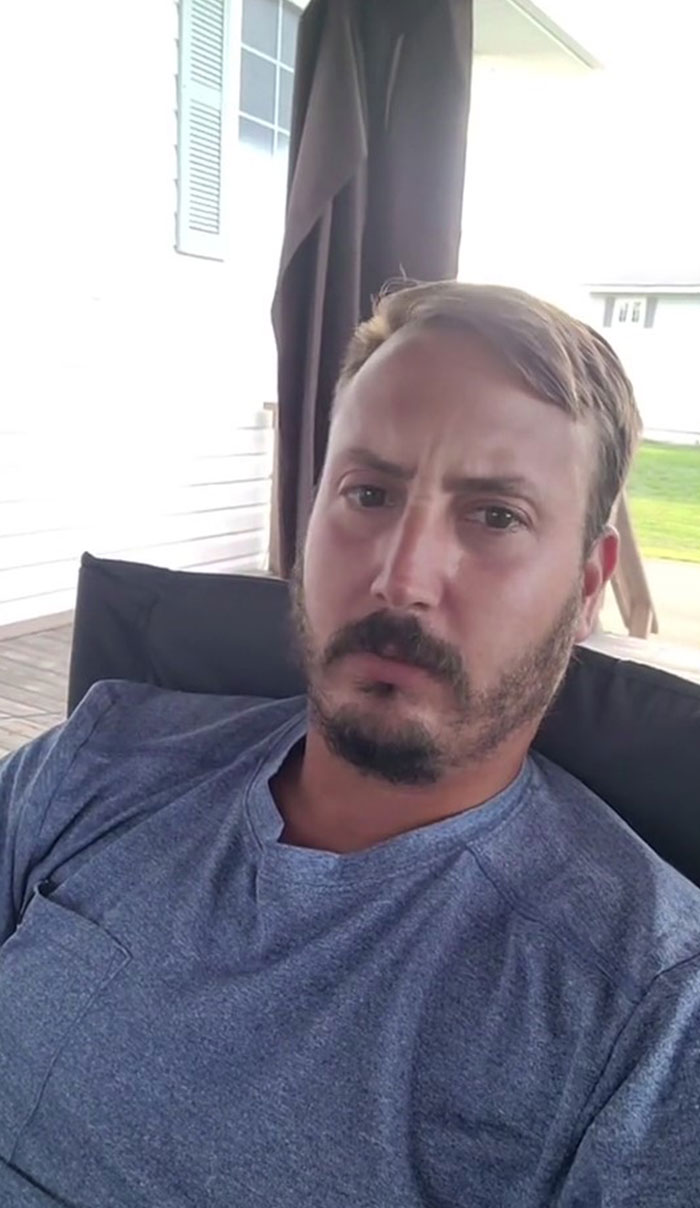 Even some parents pointed out that they would love the idea, which most likely stems from the fact that they have heard their fair share of screaming already and would enjoy the relative silence.

But not everyone was of this opinion. Some pointed out that this is an inevitable part of being in public. If Morgan wanted a more controlled environment though, many suggested private flights—after all, she “would pay SO much money.” If anything , folks thought that it was an entitled thing to say, and she should have just put on headphones like many others do and moved on.

Others sympathized with the mom. Despite OP claiming that she was fast asleep, you can never really be fully asleep as a parent. And the screams were anything but pleasant and sounded like it was harder for the mom than anyone else on the flight—she knew everyone was mad. Also, kids on planes don’t scream without reason, after all, and it’s not that easy to calm a child on a plane, if the plane itself is the problem. you can do about it.

His story, though seemingly taking the side of child-free flights, came with a plot twist 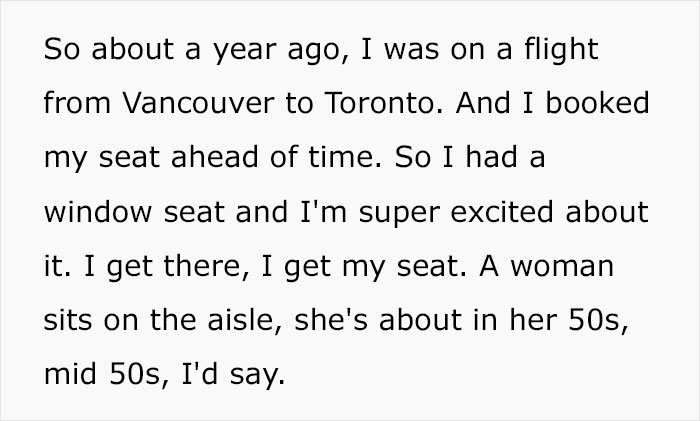 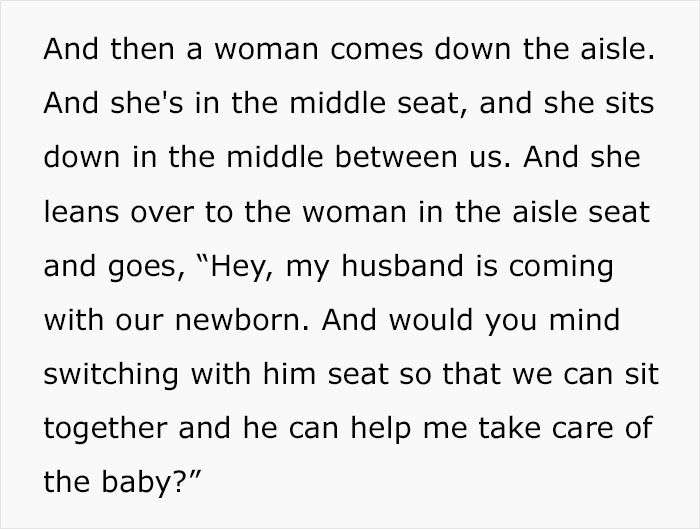 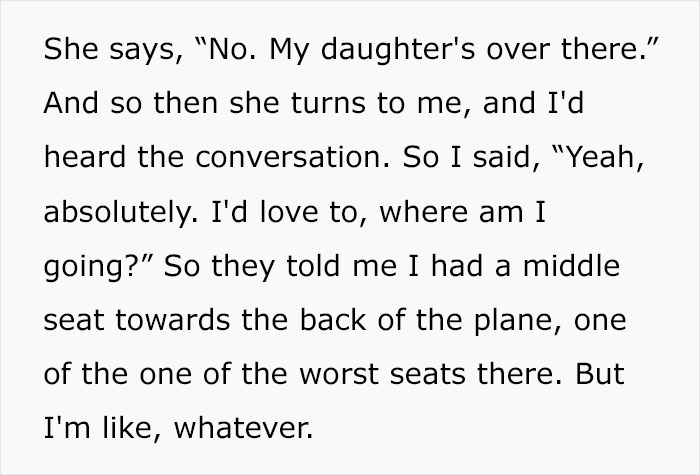 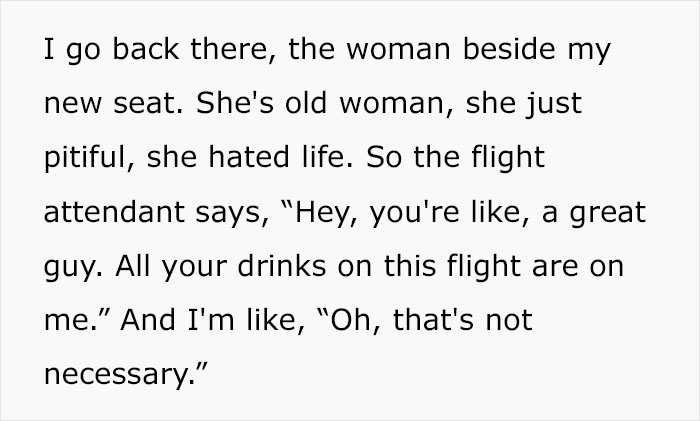 What irked one commenter the most is why didn’t Morgan help the mom with the kid if she was so unhappy about it all. And you can argue that both ways too: Morgan wasn’t in any way responsible or obligated to do that, and it could have been even worse if she tried because not all kids are accepting of strangers, but she could have still at least tried, no?

There were also those who didn’t understand where all the hate was coming from as Morgan didn’t say anything inherently mean or disrespectful. Besides, if the mom was truly ignoring the matter, then they felt that Morgan had every right to be upset about the situation.

You can watch Tyson’s full story below

While everyone was throwing axes at each other in the comments section, this dude stitched the video and shared a story of how he was asked to switch seats with a dad who would help the mom, who was originally sitting next to him, take care of the baby. He had no problem with that.

PLOT TWIST. He just didn’t want to sit next to a screaming baby. DOUBLE PLOT TWIST. Because of that, he got a seat that wasn’t all that great, but the flight attendant rewarded his noble deed with free drinks on the house.

But back to the discussion, which was all over the place as folks expressed their opinions

But back to the topic at hand. Morgan’s video got over 760,000 views with 63,000 likes and nearly 23,000 comments, all taking sides in the heated debate. The video also found its way onto several popular online news media sites, generating more discussion there.

According to Alternative Airlines, there are currently no commercial flights that would be child-free available. But they do point out that demand for such flights is growing, especially among the business clientele. But, companies like Singapore Airlines already offer child-free zones —think of it as business class except nobody under 12 is allowed.

Whatever the case, here’s the original video for you to enjoy in context, and as always we’d love to hear your thoughts and opinions on the matter—do you support the idea, do you hate it, do you care at all? us know in the comment section below!