When Todd Gustafson saw the news reports of suffering and carnage in Ukraine this February, he was determined to help.

“When the Russians invaded Ukraine, we were all watching this unfold on television and social media and just aghast at what was happening,” said Gustafson, President and CEO of Benton Harbor-based workforce development nonprofit Kinexus. “Knowing there were people that had left everything behind and were uncertain about where they were going to live or what they were going to eat … I just thought ‘I have to do something.’”

Rather than simply making a donation, though, he decided he needed to go there and help people in person.

Leadership is an active sport. We just couldn’t sit around &
do nothing. We’re off to Poland to help Ukrainian refugees & the Polish NGO’s serving them
@Caleb_KB
@KinexusGroup
@FirstChurchGod
@UnitedWay_SWMI #WeStandWithUkraine pic.twitter.com/e8WxvbJ18s

By April, Gustafson and two others – Kinexus administrator Caleb Colp and former First Church of God pastor Bob Moss – were on the ground in Poland, despite not knowing anybody there.

They used their connections through United Way of Southwest Michigan to get in touch with former St. Joseph resident Laura Sokol who has been living in Warsaw, Poland. Through Sokol, Gustafson learned about what the needs of the people were.

“At that time, it was primarily food, shelter and transportation,” Gustafson said. “So, we raised money through friends and family, and also connected with First Church … we were able to raise money quickly and not have to put infrastructure in place because they already have one.”

Busy shopping 1st day. Shout out to the inspiring work The Help Center does serving over 800 Ukrainians in Warsaw.

Gustafson and his small crew also met with businesses, non-governmental organizations and volunteers serving refugees. They were also able to help a Ukrainian florist and her family, who were living with Sokol. 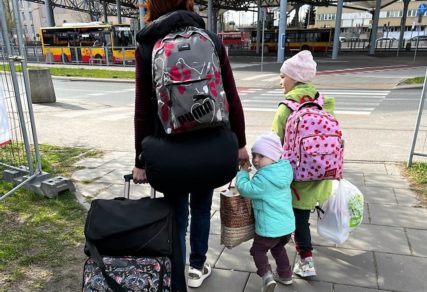 In total, Gustafson and his group were able to raise more than $20,000 for organizations like Help Center and East-West Link, which directly support refugees in Poland.

Gustafson said the purpose of his mission to Poland was not a one-time contribution.

“I really wanted to meet with the people and and build relationships and see if we can do something more systemic and enduring,” he said. “We don’t leave them and say ‘OK, thank you, we helped’ and move on. We knew this was going to be a marathon, not a sprint. We’re still kind of in that marathon.”

As an Army veteran Gustafson said it’s really important that they continue to help people if they are able.

“We are still seeing the aggressor being brutally destroyed to Ukraine, and so many people are still suffering and enduring that aggression,” Gustafson said. “They still need help, and some might say democracy is at stake here.” 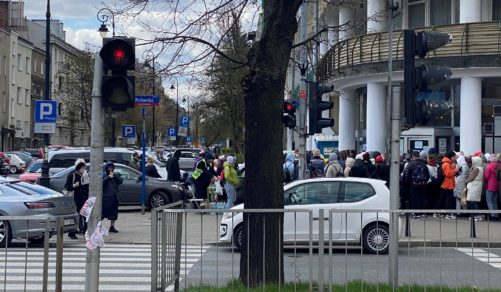 There are tentative plans to organize another trip overseas in October to continue supporting the Ukrainian refugees.

“I am, like others, worried that our attention has moved on to something else,” Gustafson said. “The demand for help is still there, and it’s equal to – if not greater than – what it was when we were there.”

Gustafson said it is too soon to ask for donations for the upcoming trip, because they haven’t fleshed out the plan yet. However, anyone with interest in helping Ukrainians, or even going with on the next trip can Gustafson directly at (269) 921-0361 or tgustafson@kinexus.org.