A man in Nebraska celebrated turning 60 over the weekend in style with a 38-mile trip down the Missouri River in a carved, 846lb pumpkin called ‘Berta’ that he had been growing for 10 years as he made history squashing a Guinness World Record.

Duane Hansen, now 60, set sail to paddle the Missouri River at around 7.30am on Saturday from Bellevue to Nebraska City, six years after former record holder Rick Swenson created a pumpkin boat to complete a 25.5-mile trip down the Red River from Grand Forks, North Dakota to Breckenridge, Minnesota in 2016.

The trip along the midwestern state’s eastern border with Iowa took Hansen, who is a Nebraska native from Syracuse, approximately six hours to complete. He sat straight and paddled on a cooler that he had placed inside the pumpkin during the entirety of his journey.

‘He came up with this idea when visiting Ohio and seeing another person attempt to set this record which is currently right around 30 miles. Seems like a unique, if not slightly crazy, way to celebrate his 60th birthday, which was [Friday].’

‘He had his wife, family and friends on hand to assist with and help document the attempt. A few of them were following alongside him in a boat, should any mishaps occur,’ he added.

Duane Hansen, 60, broke a Guinness World Record on Saturday for paddling 38-mile trip on the Missouri River from Bellevue, Nebraska, to Nebraska City. The trip took him approximately six hours to complete 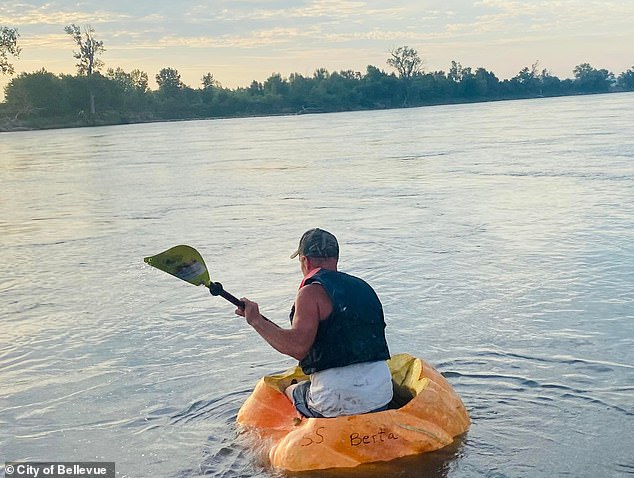 The new world record holder paddled on a cooler placed inside a 846-pound pumpkin called ‘Berta,’ which had a circumference of around 146 inches 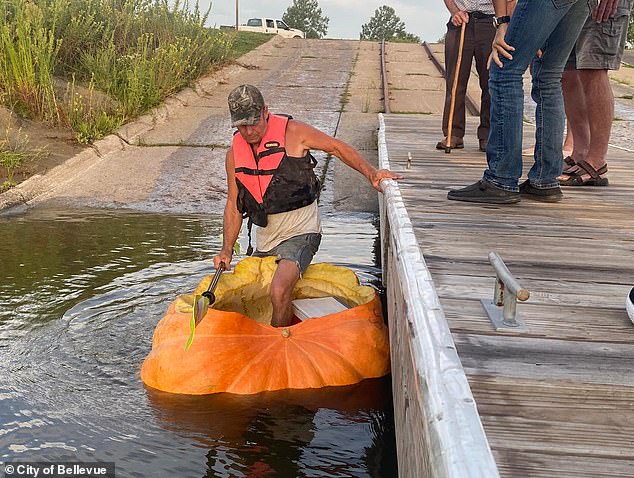 Hansen hit the banks of the Missouri river starting at 7.30 am on Saturday and completed his journey at around 6.30 pm The 60-year-old, whose birthday was on Friday, said he ‘was happy he made it’ although he felt ‘physically exhausted ‘ 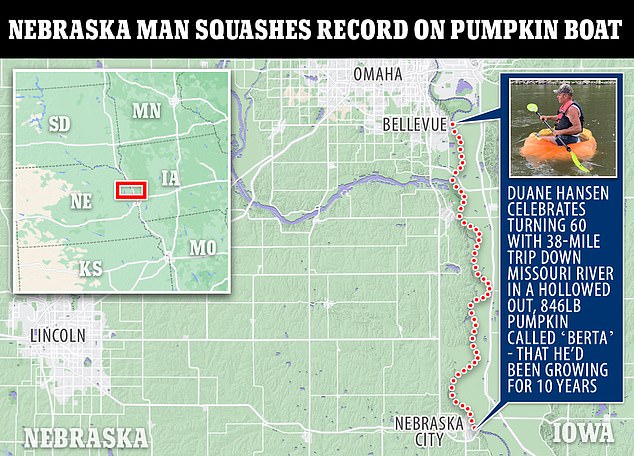 Hansen surpassed the 25.5-mile Guinness World Record at 2.52 pm, and kept on rowing for 12 more miles, the Facebook post further revealed. One more update at 9 pm announced that Hansen had completed his in-state expedition, seven hours after officially being declared as the new world record holder.

‘The Hansen family just posted on this thread that Duane Hansen made it to Nebraska City just after 6:30 pm! Congratulations, Duane for smashing the world record,’ Davidson wrote. ‘We are proud that you started this record-breaking 38-mile (61-kilometre) journey in Bellevue, and it’s been fun to follow along.’

It took Hansen roughly 11 hours to reach his final destination, as Davidson replied to a comment on Facebook through the City of Bellevue’s page that the 60-year-old felt ‘physically exhausted’ from the journey although emphasizing that he ‘was happy he made it.’

Hansen added that waves formed by passing boats and cruise ships made it all more difficult for him at times to get his pumpkin through choppy waters.

‘You’ve got to stop everything and just hold on and ride with those waves,’ he told News Channel Nebraska. ‘That was bad.’

The Guinness World Records, however, has yet to acknowledge Hansen’s quest, as there have been no updates on its website regarding the challenge. For a record to be broken, the organization requires a number of pieces of evidence, including pictures, videos, and statements from witnesses.

Hansen’s family and friends, as well as the City of Bellevue, made sure the 60-year-old’s efforts wouldn’t go to waste as they documented his excursion. 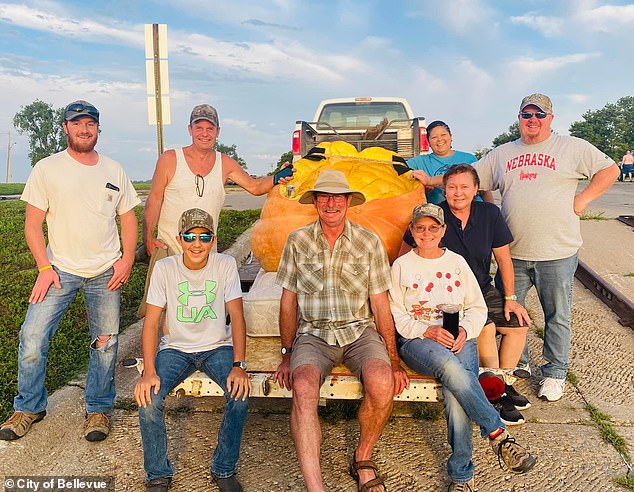 The Guinness World Records has yet to acknowledge Hanse’s accomplishment but the man’s family and friends (pictured) made sure to document the evidence, as required for submission of a new record

People online and across the globe also offered their support to Hansen, with one fan wishing him a ‘gourdspeed’ send-off while another commented on Facebook: ‘Congratulations, Duane! Cheering you on from the UK’

‘This is hilarious and inspiring. I hope someone is filming this! This is fantastic!’ a different individual shared.

‘Congratulations on your 60th, Duane! You took your ride in style. Surely hope your legs can stand once again! You got ‘er done!’ someone else wrote.

Passionate about growing large produce, which includes his now world-renowned pumpkin, Hansen had to a carve a circumference of around 146-inches for Berta to float on the Missouri River and for him to fit in it.

He had also strapped the large fruit over a mattress, hauled by his pickup truck, to get it down to the same river that Lewis and Clarke had started their expedition on in 1904. 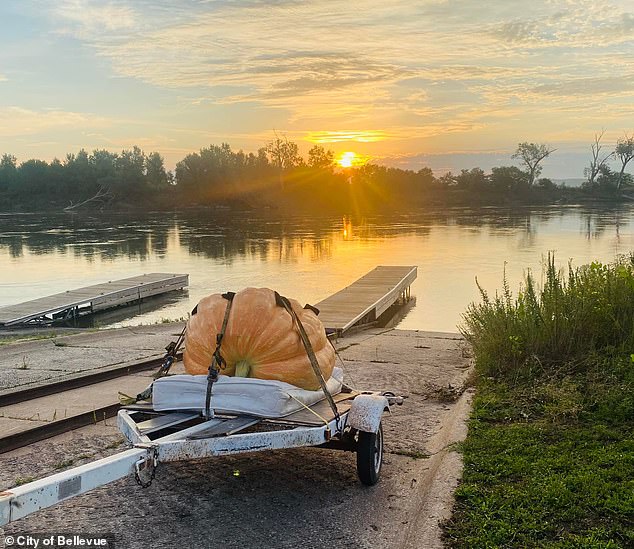 Hansen managed to get the 846-pound pumpkin onto the banks of the Missouri river by transporting it on a trailer, tying it up to a mattress

The Missouri River is also the longest tributary of the Mississippi River in the United States and North America. Its is formed by the confluence of three different streams: the Jefferson, Madison and Gallatin rivers; and is 2,341-miles long.

When asked, how he got the inspiration to come up with the idea, Hansen referred to a giant pumpkin growing, three-day seminar in Portland, Oregon, where he ‘met this lady that had the record. At the time it was 25-something miles. And I asked her a lot of questions and that’s when I decided I wanted to do this,’ he said.

When Hansen’s wife, Allyson, was asked about what the future holds for her and her new world record holder husband, she told News Channel Nebraska, ‘I never know what’s going to be next.’

Hansen added: ‘I ain’t gonna do this again. I’m done with this.’