Meghan Markle is opening up about a scary ordeal with her son Archie while she was in Africa with Prince Harry.

In the premiere episode of her “Archetypes” podcast, Markle sits down with friend Serena Williams and shares the story about their visit to South Africa during a royal tour in 2019.

“When we went on our tour to South Africa, we landed with Archie,” Meghan explained. “Archie was — what? Four and a half months old? And the moment we landed, we had to drop him off at this housing unit that they had had us staying in.” 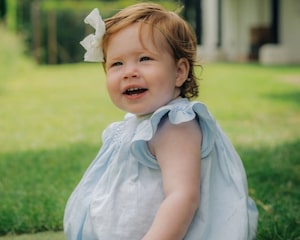 Markle continued, “He was going to get ready to go down for his nap. We immediately went to an official engagement in this township called Nyanga, and there was this moment where I’m standing on a tree stump and I’m giving this speech to women and girls, and we finish the engagement, we get in the car and they say, ‘There’s been a fire at the residence.’ What? ‘There’s been a fire in the baby’s room.’ What?”

When they arrived at the housing unit their “amazing nanny” was in tears.

The Duchess of Sussex continued, “She was supposed to put Archie down for his nap, and she just said, ‘You know what? Let me just go get a snack downstairs.’ And she was from Zimbabwe, and we loved that she would always tie him on her, her back with a mud cloth, and her instinct was like, ‘Let me just bring him with me before I put him down.’ In that amount of time that she went downstairs, the heater in the nursery caught on fire. There was no smoke detector. Someone happened to just smell smoke down the hallway, went in, fire extinguished.”

She added, “He was supposed to be sleeping in there.” 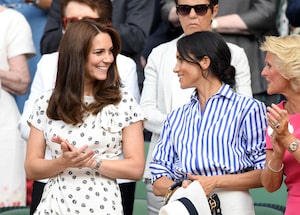 Meghan said, “As a mother, you go, ‘Oh, my God, what?’ Everyone’s in tears, everyone’s shaken. And what do we have to do? Go out and do another official engagement.”

The star added, “I said, ‘This doesn’t make any sense. Can you just tell people what happened?’ And so much, I think, optically. The focus ends up being on how it looks instead of how it feels. And part of the humanizing and the breaking through of these labels and these archetypes and these boxes that we’re put into is having some understanding on the human moments behind the scenes that people might not have any awareness of and to give each other a break . Because we did — we had to leave our baby.”

The 41-year-old went on, “And even though we were being moved to another place afterwards, we still had to leave him and go do another official engagement.”

Serena commented, “I couldn’t have done that. I would have said, ‘Uh-uh.'”

During a voice-over for the podcast, Meghan added, “These human moments behind the scenes, the ones under the surface… they’re everything. Because when we don’t swim in the shallow end, and instead choose to dive into the deep end, that’s when we gain a more nuanced understanding of each other.”

It was during that trip to South Africa that Meghan and Harry famously took Archie to his first official royal engagement, a meeting with anti-apartheid activist Archbishop Desmond Tutu and his daughter, Thandeka Tutu-Gxashe.

Within months of the royal tour, however, the Duke and Duchess stepped down as senior royals.