Experience is one of the characteristics that people look for in their travels, unique and different experiences that allow them to break out of the routine, as is the case with many hotels, which have adapted to the culture, trends and customs of each place. – Customs have been appropriated. They find each other.

Brothers Frank and Patrick Ricklin decided to modernize the concept of housing, with no walls or ceiling, just a double bed with two nightstands in the Safin Valley, Switzerland.

Incredible views surrounded by nature, starry nights from the bed and the service of waiters serving breakfast in the “room”, are the experiences that caught the attention of tourists.

“We want to put guests at the center of the creative process while at the same time pushing the boundaries of the hospitality industry. We are also trying to rethink the concept of real estate in the traditional hospitality model”, commented the manager of the place, Daniele Charbonnier,

Charbonnier explained where the idea came from: “The same essence was kept in this new version in the middle of the valley, but this time we got rid of all the walls and the only thing left is the traveler and their experience.,

According to the web page of the site, It is considered a concept hotel. The name of this type of accommodation seeks to differentiate itself from the modern and traditional hotels found around the world. The designers of this space show that each of its guests is part of a work of art, which is how the proposal is presented.

The areas in which these rooms are located have been strategically chosen so that the environment has what the brothers need to offer their clients. 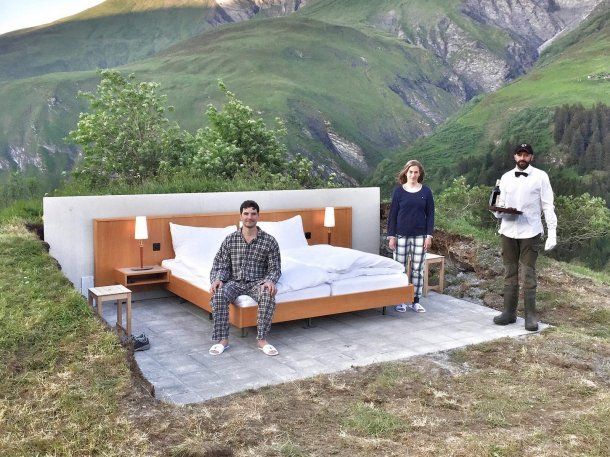 The local farmers are the ones who also work as butlers in the hotel. They wear a smart white shirt with a bow tie, as well as shoes so they can walk around the rooms and offer service to guests. Snacks that are made from products grown in the same region.

Safety is one of the issues that most fears those interested in this adventure. However, Charbonnier claimed that Each suite has individual security and so far the main intruders have been squirrels, cows and birds.

The hotel recently introduced a new room called ‘Anti Idyllic’ with the concept of a fallen sky as if it were a mistake from The Matrix. The focus of migration is to be able to reflect on the current world situation. “It becomes a declaration of the urgency of the necessary changes in society”, explained the concept’s artists during the opening of the space.

The “Anti-Idelic” Suite refreshes our doubts and insecurities. I hope it inspires guests to reflect and share their thoughts, which we categorize and collect to develop local works in the future.” Will do”, the mayor of Salon explained, Charles Henry Thureyin an official statement.