A pale pink mid-century modern motel on Rivers Avenue in North Charleston built in 1961, which enjoyed its heyday through the 1970s, is set to come back online this fall after new owners completed a full historic renovation.

Owners say the Starlight Motor Inn at 3245 Rivers Ave. — formerly Star of America — will include 51 rooms, a restaurant, a cocktail lounge, a pool (to be open in spring 2023) and a poolside bar at an affordable price point.

The new owners plan to keep the motel’s pink color, neoclassical facade and decorative lattice exterior beams, and will lean into the mid-century theme with its decor.

Longtime friends and partners on the project are Ham Morrison and Walker Lamond. Morrison has renovated several properties he owns in the Charleston area, including historic renovations of a 32,000-square-foot building that houses the Redux Contemporary Arts Center on King Street.

The Rivers Avenue inn first piqued Morrison’s interest thanks to its curb appeal, despite being shuttered to the public since the 1990s and a portion being used as a residence.

“With the pink and white, it looked like it was right out of South Florida,” Morrison said.

After learning that owner Jay Patel was open to selling, Morrison asked Lamond to come on board and lead the creative and branding side. 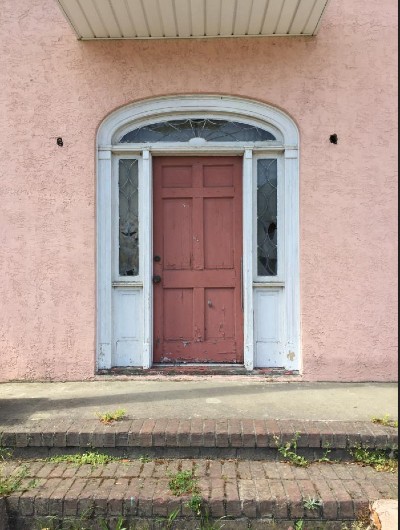 “We talked to the original owner who said that back in the ’60s and ’70s, the bar was packed with Navy sailors and contractors and families by the pool. It really came from an era when (nearby) Reynolds Avenue was truly the Main Street of North Charleston,” Lamond said.

The duo ramped up renovation plans after learning the motel, which had fallen into disrepair, was slated for demolition. According to Charleston County land records, Star Motel LLC purchased the property for $800,000 in March 2020. Morrison said the property sits on about an acre of land.

The first order of business was to get the hotel onto the National Register of Historic Places and use historic tax credits to help fund the full renovation.

“Historic tax credits can be the difference in a project working out or not,” Morrison said.

Morrison said he worked with historian and consultant Brittany Lavelle Tulla, whom he worked with during the Redux Contemporary Arts Center renovation. Tulla discovered that the America Motor Inn was likely the first prefabricated motel in the country, a note that went into its National Register of Historic Places application.

“They constructed this steel structure and like an erector set, brought in these rooms that were made in a factory in Georgia and shipped by railroad, and like drawers, slid them into the rectangular structure,” Morrison said.

That unique history “added to the allure of the property — it felt important to save,” Lamond said.

Getting the property off the list of condemned places was a longer process, according to Morrison. The owners needed to hire a forensic engineer to prove to the city that the building could indeed be saved.

“We had to prove it wasn’t just a pipe dream; we had to present findings to a committee. Learning the building could be put on the National Historic Registry was a big part of convincing them to take it off the condemned list,” Morrison said.

Major renovations over the past two years on the one-acre site included adding a new roof, new electrical work, plumbing, heating and air and renovating the pool and pool house bar, which was constructed with historic bricks. The owners plan to revive the full-service restaurant on the ground floor of the inn and keep the original bar’s name, Burgundy Lounge.

Jay Patel’s son, who grew up in the motel and is now in his late 20s, is working closely with the duo on the project, Lamond said.

In addition to the motel, the owners plan to eventually open the Starlight Village, a collection of restored two-bedroom cottages immediately next door. Managed by StayDuvet, all of the rooms will have high-end touches at an affordable price point, owners said.

“There are plenty of motels being rehabbed throughout the country with $350 price tags per room, and that’s not our move,” Lamond said. “Ham (Morrison) said from the beginning that in keeping with the spirit of this property and this neighborhood, we should price these as Days Inn rates, to keep it affordable for families and people traveling to Charleston by car, families in North Charleston having family meetings, people coming to work in town — that’s what will set us apart. We hope we can fill that gap and appeal to folks on a budget.”

An interior designer whom Morrison has worked with on furnishing short-term rentals has been tasked with outfitting the inn with a mid-century modern vibe.

“We’re leaning into mid-century vintage, but also want to capture what’s quintessentially South Carolina and Southern about these spaces and also reflect the community in North Charleston,” Lamond said. “There will be texture and wood and cane and lots of vegetation. It will have a nice southern patina to it all. We want it to feel vintage, lived in, comfortable and accessible. … It will be very ‘Instagrammable’ for sure.”

Morrison said he hopes the reopening of the Starlight Motor Inn will spur other development in the corridor.

“We feel we can bring life back to the corner of Rivers and Reynolds Avenue,” Lamond said. “We’re on a mission to activate this entire neighborhood because we love it so much and it has so much of the old Charleston spirit in it and it’s brimming with potential. If we can polish up the landmark on the corner, we hope it has an effect of getting more storefronts happening.