Public House Brewing is in St. James Missouri and worth the drive.

Hopskellar is a lesson in perseverance. Located in downtown Waterloo, Illinois, the brewery opened in September 2016. By October, it was closed after a fire tore destroyed the kitchen, wrecked the brewing equipment and even destroyed much of the dining room. Brewmaster and operating partner Matthew Schweizer was determined to rebuild. Within a year, the brewery was open again and bringing its Northern England-influenced ales back to Waterloo’s craft-beer scene. Among the offerings are a pale mild ale, Northern pale ale and a Northern English brown ale. Once you’ve had your fill of English-inspired beer, head around the corner to Stubborn German Brewing Company (119 South Main Street, Waterloo, Illinois; 618-504-2444, stubborngermanbrewing.com) for, you guessed it, German-style brews. —Rosalind Early

Friends and beer aficionados Judson Ball, Tyson Hunt and Andrew Sharp broke ground on Logboat Brewing Company in 2013, and it soon became a Columbia, Missouri, institution. The beer, with whimsical can art, include a Missouri lager; a mild brown ale; and Stormin’ Norman golden ale, named after Norman Stewart, Mizzou’s winningest basketball coach. But the beer isn’t the only draw to this taproom and brewery. On a nice day, you can enjoy the Logboat Park, a grassy area with games. Ozark Mountain Biscuits is not far away and the smell often wafts over. Cold beer, outdoor games and the smell of baking bread? This place is definitely worth the roughly two-hour trip. —Rosalind Early 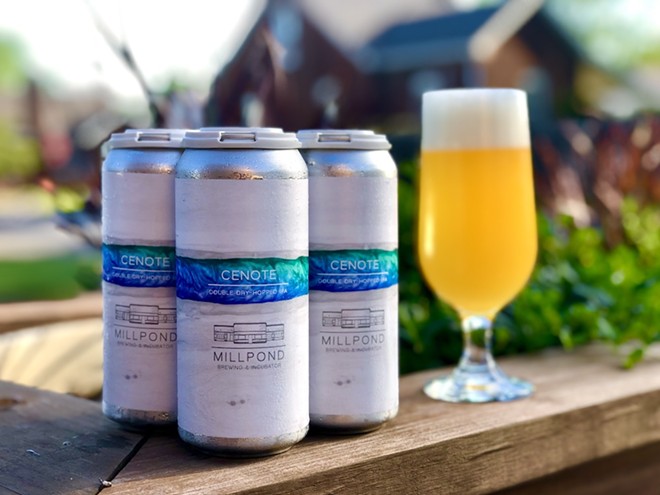 If you like home brewing, then you must stop at Millpond Brewing and Incubator. Bryan Schubert started the business after spending nine years as a homebrewer himself. From that he, alongside his brother-in-law, developed an idea: to offer homebrewers the chance to sell their beer at Millpond (the incubator part). Don’t worry, you won’t be drinking beer from some stranger’s closet. The homebrewers use the Millpond system to scale up their production. Patrons get a chance to try one-of-a-kind beer in the former Shell-station-turned-brewery. —Rosalind Early

After years of living in St. Louis and working at Urban Chestnut Brewing Company, James Rogalsky and his wife, Lauren Pattan, returned to their hometown of Alton, Illinois. They had one goal: start a microbrewery. They did, and now, Old Bakery is one of the most popular breweries in the St. Louis metro area. Located in a rehabilitated historical building that was a bakery in the late 1800s, Old Bakery features an open bierhall with a 50-foot-long centerpiece bar from the 100-year-old floor of a one-room school in Collinsville. Old Bakery prides itself on sustainability. It’s decked out with repurposed wood tables, LED lighting and a food-waste composting system. —Benjamin Simon

Situated in Washington, Missouri’s quaint downtown near the waterfront, Old Bridgeview Brewing is an easy hour’s drive from St. Louis. The community brewery has new beer every week, most made from locally sourced ingredients. Plus, Old Bridgeview regularly serves browns and IPAs on tap and has stouts for all seasons. A must-try is the Fraulein Hilda, a German-style Berliner Weisse that’s refreshing and tart, served with a housemade herb-and-fruit woodruff syrup to add some extra sweetness. Old Bridgeview is owned by three local homebrewers, and as you approach the bar to place your order, you’ll likely be greeted by one of them who can answer any questions you have. For customers who want something other than beer, Old Bridgeview has kombucha on tap, oolong iced tea, hard apple cider and vodka seltzer. —Monica Obradovic

Public House’s bright beer cans are imagination works of art. There’s the cream ale with a bear rocking out in headphones and sunglasses, or Among the Willows, which features a scene from an Old West shootout. la René Magritte, the Samuel Clementine, a seasonal beer, features a man with an orange for a face. Bierleichen (which means beer corpse in German) features a blue zombie. It would be hard to top the colorful cans, but the brews inside manage to do just that. The cream ale is a perfection of the American craft-beer style. It’s a malt-forward beer with a delicious flaked cornstarch aroma and golden color. Drink it in the spacious taproom, where you can also get treats like hummus tacos and jalapeno mac and cheese bites, or head out to the beautiful gardens, where Public House often hosts concerts in the warmer months. —Rosalind Early

Dubbed America’s Coolest Microbrewery by Men’s Journal, Scratch Brewing Company is less a brewery than an examination of the interplay between beer and land. Drawing on the concept of terroir — a common factor when discussing wine or cheese — owners Aaron Kleindon and Marika Josephson’s brews reflect the surrounding Shawnee National Forest, resulting in forage-focused brews that feel more like a brewing subculture than a method. Located about two hours from St. Louis on 75 wooded acres in southern Illinois, Scratch offers city dwellers a journey into an entirely different way of thinking about beer. —Cheryl Baehr