My family and I recently returned from a trip with several members of our extended family to Telluride, Colorado. While there, we panned for gold, took a couple of hikes, went on a bike ride, rode the free gondola, ate ice cream, had big family meals and smaller meals in the condo where we were staying, and star-gazed. We saw shooting stars, satellites, and the band of the Milky Way. We saw a huge herd of about 30 elk cross the road in front of us. We saw old mill ruins and old mine entrances. We saw harrowing ski runs and stunning mountain peaks. We lose our breath more easily than we would have at home. 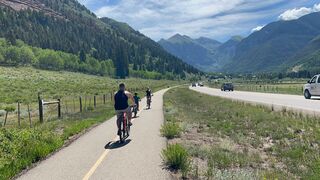 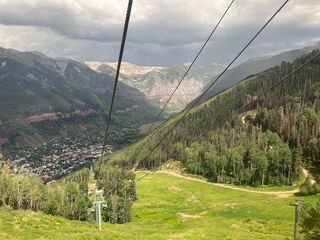 On the trip, two particularly memorable experiences occurred which caused me to reflect on — and more deeply appreciate — the mindset of the children who were with us. The first occurred in the context of a family hike. One day, all 13 of us family members took a hike that my Colorado-acclimated, very athletic aunt and uncle described as moderate but “doable and totally worth it.” This was fine for those among us who are more athletically inclined, but it proved to be quite a challenge for several of the members of our group. There were steep inclines — both up and down — loose rocks, wet rocks, warm temperatures, and a thin atmosphere. 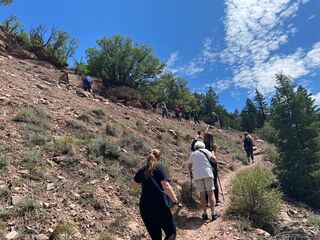 As you can guess, this challenging walk resulted in several strings of complaints, some fear, and even some tears. Yet the folks who struggled knew there was no turning back — they had to complete the journey. And, as in all things, the satisfaction of completing a journey is that much sweeter when the journey has been a bit difficult. I could see that the members of our group who struggled a bit were that much prouder when they “survived” the hike.

A recent string of research backs up my anecdotal observations of these individuals’ pride. In fact, what I was observing is what psychologists call “authentic pride,” or the deep personal satisfaction of having achieved a valued goal. According to psychologists, this type of pride is great for kids — it can encourage self-discipline, hard work, and willingness to approach future challenges. The positive effects of authentic pride actually predict academic success even after controlling for intelligence and socioeconomic status. As Carol Dweck points out in her book, a positive mindset is one of the key ingredients of success.

Children experience more pride when challenges are difficult than when they are easy. In particular, they are more likely to experience pride and positive emotions when they view their current performance as an improvement over their own past performance (as opposed to comparing their performance solely to that of others). Indeed, I could tell that my more challenged family members were authentically proud as they exceeded their own expectations of what they could do. They had tried something more difficult than they normally would — and perhaps more difficult than they had ever completed before — and succeeded.

The second memorable experience of the trip was when we attempted to take a jeep ride up a steep, rocky mountain road to see the old Smuggler’s Mine. Telluride — like the rest of the country — was experiencing unseasonably warm temperatures at the time of our visit. On the day we signed up for the jeep tour, it was 80 degrees even at 10,000 feet above sea level. What followed seemed like something out of a bad comedy. The first vehicle we took stalled after about 10 minutes into the journey. It overheated and wouldn’t restart, and we had to (after a very hairy K-turn on a narrow road) roll back into town in neutral.

We were offered a second chance to make the journey in a different truck, and so we took it. All started out well, but when our driver pulled over to pause and let a slow-moving vehicle in front of us get a larger distance ahead, truck #2 wouldn’t restart. After about 20 minutes without success, and only the offer to “reverse” down the mountain (which none of us passengers were comfortable with!), the driver had to call for “rescue” for us. This simply meant his boss had to come and retrieve us in his personal vehicle, but it was still rather exceptional in the eyes of the kids. And so, attempt #2 to make it to Smuggler’s Mine was also a bust.

I was concerned that the children — especially my 9-year-old son, the youngest on the trip — would be overcome with frustration and disappointment. The experience was scary, unbelievably unfortunate, and left (at least us adults) feeling unfulfilled. Additionally, research shows that even as old as ages 9 or 10, children have trouble dampening expectations in order to cope with disappointment. However, my 9-year-old son viewed the whole thing as quite an exciting escapade! In fact, it is the first story he tells anyone who asks about his trip to Colorado. Heh love that we got stuck not once but twice and that we had to be “rescued.” He thinks it’s hilarious that this outcome — which according to the company of course disbelief happens — happened to us in two different vehicles.

What my son will remember about that afternoon will not be the frustration, the fear, the uncertainty, or the chaos. He won’t dwell on the heat, the dust, or the flies. What he will remember will be the adventure. Research suggests that children who cope better with disappointment may have more autonomy support in their lives and may be better at effortful control. Whatever the case, my son (and all the other kids who were along for the ride) coped amazingly well. Their innocence and optimistic perspective remind me — as a jaded, cynical adult — that most times, everything in life is better when viewed through the eyes of a child.