China fired a series of ballistic missiles into waters close to ports in Taiwan and conducted other military drills on Thursday, in an attempt to punish the country for hosting a visit by US House Speaker Nancy Pelosi.

The Dongfeng ballistic missiles are some of the People’s Liberation Army’s most potent weapons. They include the anti-ship intermediate range DF-21, which is viewed as a tool for deterring the US Navy and its aircraft carrier strike groups from operating in strategically important areas near China.

Taipei also said four drones had flown over islets next to Kinmen, the Taiwan-controlled island just off the Chinese coastal city of Xiamen — the second such overflight of Taiwan-held offshore islands during the current Chinese exercises and the third time in the past week .

A booming sound from apparent artillery fire could be heard in northern Taiwan in the afternoon as China began the three-day drills, which are unprecedented in scale and strategically located in six areas off the island’s coast.

“This is a serious issue that relates to our country’s security and public safety. We strongly condemn it,” defense minister Nobuo Kishi said.

According to a Japanese defense ministry chart, one missile flew over Taipei. Jude Blanchette, a China expert at CSIS, a think-tank, said firing a missile over the Taiwanese capital was a “significant escalation”.

The Pentagon declined to comment on the Chinese military activity and the White House did not respond to a request for comment. Ahead of Pelosi landing in Taiwan, secretary of state Antony Blinken warned China “not to engage in any escalation”.

Pelosi became the first Speaker of the US House of Representatives to visit Taiwan in 25 years this week as part of an Asia trip during which she pledged “ironclad” support for the country’s democratically elected government.

Apart from the missile tests, the PLA also sent warplanes towards Taiwan. The Taiwanese defense ministry said 22 fighter jets crossed the median line in the Taiwan Strait on Thursday, an unofficial dividing line the two sides respected in the past to avoid conflict.

“We are committed to maintaining the status quo of peace and stability across the Taiwan Strait,” Tsai added in a speech. “We are calm and not aggressive, we are rational and not provocative, but we will also be firm and not back down.”

In an effort to reassure the public, she said her national security team was doing everything it could to maintain the safety of flight routes and sea lanes and ensure normal operations of ports and airports.

“We are also working to ensure normal operations and stability in the economy and financial markets,” she said.

China, which accused Pelosi of violating its claimed sovereignty over Taiwan, waited for her to depart from the island on Wednesday before starting the drills.

Analysts said the delay helped avoid immediate clashes with the US, but the exercises were expected to significantly exceed the scale and intensity of those held during the last crisis in the strait 26 years ago.

They said the maneuvers risked undermining a fragile, decades-long peace between China and Taiwan, which has enjoyed de facto independence since the end of the Chinese civil war in 1949, and could trigger conflict between Beijing and the US.

Speaking at CSIS, John Culver, a former top CIA China analyst, said the Chinese firing of the missiles along with the other military activity suggested that US-China relations had entered a “new era”.

“I think that this is the new normal. The Chinese want to show as they have in previous Taiwan street crises that a line has been crossed by the Speaker’s visit,” Culver said.

Separately, Pelosi’s visit to the island continued to make diplomatic waves. China canceled a foreign minister-level bilateral meeting with Japan that was scheduled to take place in Cambodia on Thursday in an apparent protest against a statement released by the Group of Seven countries and EU criticizing the PLA exercises.

“Japan is not in a position to comment on Taiwan-related issues,” said Hua Chunying, a Chinese foreign ministry spokesperson.

In South Korea, president Yoon Suk-yeol declined to meet Pelosi during the Seoul leg of her Asian tour in what critics said was a snub at placating Beijing. 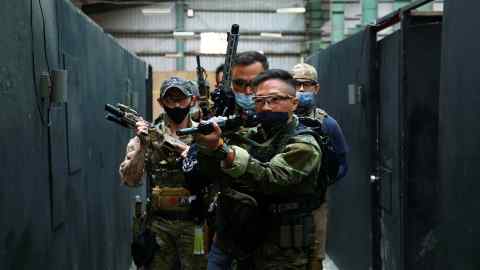 US reaction to the exercises has been muted. “USS Ronald Reagan and her strike group are under way in the Philippine Sea continuing normal, scheduled operations as part of her routine patrol in support of a free and open Indo-Pacific,” the US Navy’s Seventh Fleet said.

The USS Tripoli, a large amphibious assault ship that carries fighter jets, has also been operating in the region.

The Chinese exercises have disrupted air traffic, with South Korea’s flagship Korean Air canceling all flights between Seoul and Taipei on Friday and Saturday and its rival Asiana Airlines has also reportedly done the same. Asiana could not be reached for comments.

Disruption to commercial shipping is so far unclear. According to the ship tracking website MarineTraffic, traffic in the areas the PLA declared off-limits was thinner than usual, although some fishing and cargo vessels were passing through.

Beijing denounced Pelosi’s visit in a barrage of propaganda as a provocation and singled out some politicians from Taiwan’s ruling Democratic Progressive party as targets for future “punishment”.

Additional reporting by Maiqi Ding in Beijing, Christian Davies and Song Jung-a in Seoul and Kana Inagaki in Tokyo