Debt and equity markets sold off for a multitude of reasons on Tuesday. All in all, though … I think one would have to say that equities have been quite resilient to this point. Sure, the Dow Industrials were weak on Tuesday, surrendering 402 points or 1.23%.

That said, the Dow Industrials are narrow in nature and not tracked by a lot of capital. If not for the sake of tradition, the Dow Jones Industrial Average would not be considered to be a “major” gauge for broad market performance. On Tuesday, DJIA performance was skewed to the downside by Caterpillar (CAT) and Boeing (BA). Those two gave up 5.8% and 3.4%, respectively.

Elsewhere, performance did shade red for the day and did ebb late in the session, but the movement was much more restrained. The S&P 500 gave up 0.67% for the day, while the Nasdaq Composite backed up just 0.16%. Smaller cap stocks could be seen as a somewhat tougher out on Tuesday, depending on metrics used. The S&P Midcap 400 took a 0.96% beating, while the S&P SmallCap 600 fell 0.84%. However, the Russell 2000 closed essentially flat (down less than one point, -0.05%).

Market breadth was really not that poor at all considering that all 11 S&P sector-select SPDR ETFs shaded red on Tuesday. While Communication Services (XLC) led the way at -0.16%, and the REITs (XLRE) took residence in the basement at -1.32%, there were no “groupings” of stocks that either led or lagged. Cyclicals, Defensives, and Growthy types were sprinkled about the 11 slots on the daily performance table.

Check this out … Losers beat winners at the NYSE by a rough 8 to 7, while winners beat losers at the Nasdaq Market Site by just a smidge. Advancing volume took a 45.9% share of composite NYSE trade, but a much more impressive 64.2% share of composite Nasdaq-listed trade. Interestingly, aggregate trading volume did increase on Tuesday from Monday, but has not yet returned to anything close to longer-term averages.

Now, after two red candles, the S&P 500 appears to have found support after a multi-week rally exactly where it had prior to the selloff that gifted us the tradable lows of mid-June.

Is this meaningful? Hope not. It is uncanny though how for eight trading sessions spanning late May into early June, the S&P 500 traded in such a tight range and now for the past three sessions, have resumed taking up space within almost that same tight range precisely. Not only do algorithms see this, algorithms have created this.

The big difference now, however, would be that the S&P 500 is on the right side of the 50 day SMA this time around, which could make a profound difference in just how much resilience equities can show as the July run is digested, or how violent any coming deterioration in price discovery might be, should that line fail.

Why do I keep referring to resiliency in equity market action this week?

There were plenty of reasons on Tuesday that, not so long ago, might have created a more intense environment for “risk-off” behavior. For one, there was geopolitcal risk, as Speaker Nancy Pelosi touched down in Taipei, greeted Taiwanese leadership and the mainland Chinese government in Beijing threw a hissy-fit.

Then there was the less than stellar macro, some cautious Fed speak, and a few “not so hot” earnings reports managed to cross the tape. Still, equities for the most part, stood their ground. Still, equity index futures overnight appeared to have managed to hold that same ground.

For the first time since the FOMC’s second consecutive 75 basis point rate hike last week, several Fed officials were out and about on Tuesday …

Cleveland Fed Pres. Loretta Mester, who does vote on policy this year, said, “We have more work to do because we have not seen that turn in inflation. It’s got to be sustained, several months of evidence that inflation has first peaked – we haven’t seen that yet – and that it’s moving down. ” Hmm, Loretta does understand that monetary policy cannot place a significant impact on food and energy prices, right? She does see that core inflation peaked in March according to the CPI and in February for those following the Fed’s fave, the PCE data, right?

Chicago Fed Pres. Charles Evans, who does not vote on policy this year, said, “The kinds of things that would make larger rate increases more important, like in September, would be if you really thought things weren’t improving. I think that there’s enough time to play out that 50 (bps for September) is a reasonable assessment, but 75 could be okay too. “

Gee willikers. Guess it doesn’t matter. These guys know that the effects of higher short-term rates have not yet hit the Main Street economy, and that quantitative tightening has barely gotten underway … yet that economy is already reeling, right? Maybe they just don’t get it. Wouldn’t be the first time.

St. Louis Fed Pres. James Bullard, who does vote on policy this year, said, “It appears that both the Fed and the ECB may be able to disinflate in an orderly manner and achieve a relatively soft landing.” Bullard also mentioned that the Fed may be able to slow inflation without sparking a recession. Yes, he thinks that the Fed might not spark the recession that by commonly understood definition, the economy has been in since January.

Hey, maybe if you close your eyes, and pretend that you’ve won the lottery, and then change the definition of what constitutes winning the lottery, you can then win the lottery. Maybe.

What these Fed speakers did was cause a selloff across Treasury markets. While the US Ten Year Note did this …

… it did pull the yield spread between the US Three Month T-Bill and the US Ten Year Note off of the ledge of impending doom.

On Tuesday, the BLS went to the tape with its data for JOLTs job openings for June. The result wasn’t pretty. With expectations centered for something around 11M, which would have been a significant decrease from the 11.303M reported for May, the estimate printed at 10.698M openings. This was the softest print for this data-point since last September. Too bad, this specific number runs with such a lag.

It would be more helpful to put in context with this Friday’s July employment based surveys that will also be released by the BLS if the lag could be reduced. We already know that the Challenger Job Cuts report for June was easily the worst experienced since early 2021, and expectations are that July was a worse month for labor market demand than was June.

According to a report published by the New York Fed, credit card balances increased 13% year over year for the second quarter to $ 890B. This was the largest year over year increase for this item in more than two decades. That said, 233M new credit card accounts were opened during the quarter, which is the most new accounts created in one quarter since 2008.

Does this mean that the US consumer is gleefully powering through, and spending borrowed money despite the fact that real wages have continued to badly lag the headline rate of inflation because they are so darned confident? Or does it simply mean that Mr. and Mrs. America have had to borrow at an increased pace just to keep their households at a certain standard of living and have had to take on additional credit cards to do so? Problem? What problem?

Where do we begin?

With Robinhood (HOOD), which will reduce its workforce by another 23% after reporting a $ 295M quarterly loss? With MicroStrategy (MSTR), after taking a $ 917.8M Bitcoin related impairment charge that forced the firm to kick co-founder and CEO Michael Saylor “upstairs” to an executive chairmanship role?

With Airbnb (ABNB) which is trading lower after missing estimates for bookings? Hmm. That brings us back to that consumer. If they are not bloating their credit card accounts on travel, then they must be buying the things that their families need with credit. Revolving credit. Why think so hard? Party on, dudes.

Then there was Sarge-fave Advanced Micro Devices (AMD). AMD hit a two run home run. Markets had priced in grand salami. The firm posted adjusted Q2 EPS of $ 1.05 (GAAP EPS: $ 0.27) on revenue of $ 6.55B. The sales number was good enough for annual growth of 70.1%, and both top and bottom line results were strong enough for slight beats. Gross margin dropped to 46% from 48% for the year ago comp.

This, and then guidance offered, which was conservative are the reasons for last night’s / this morning’s weakness.

For the full year, AMD reaffirmed revenue guidance of $ 26B to $ 26.6B. The midpoint would be good for 60% growth. The firm also expects adjusted gross margin to print at 54% for the full year, which is a little lighter than the 54.5% + that many had hoped to hear. 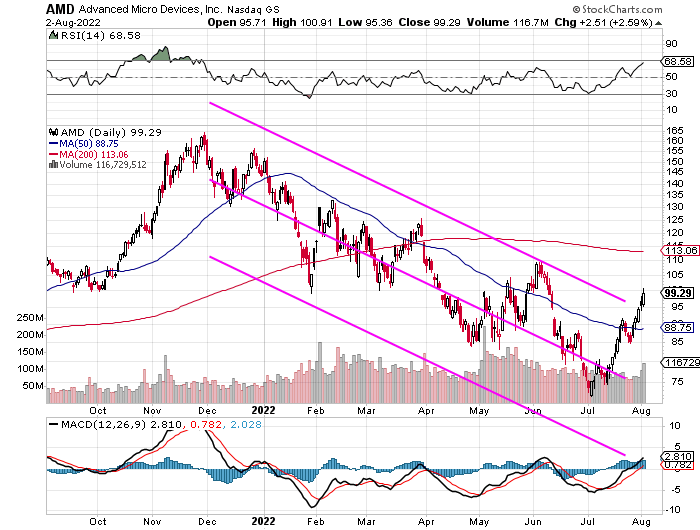 As I had mentioned ahead of the fact, AMD is my largest holding even after taking some profits ahead of last night’s report. Am I disappointed? Only mildly. I always get a nasty feeling when my longs run higher into earnings. We added close enough to the lows and took those shares off close enough to Tuesday’s highs.

For the short-term, my plan is to add those shares back on close to the 50 day SMA if offered the opportunity. For now, the 200 day SMA remains that target / pivot. That, however, is not going to be Wednesday’s concern.

The Fed (All Times Eastern)

(AMD is a holding in the Action Alerts PLUS member club. Want to be alerted before AAP buys or sells this stock? Learn more now.)

Get an email alert each time I write an article for Real Money. Click the “+ Follow” next to my byline to this article.