After canceling her much-anticipated beach vacation to Kauai, Melissa Smithers thought she had $2,034 in American Airlines flight credits.

“When I went to book a trip using the flight credit, it was gone,” she says.

She contacted her online travel agency, which delivered the bad news: Her American Airlines flight credit had expired two months ago.

Hadn’t Expedia told her she had four more months to use her flight credit?

Expedia would hear none of it. Her flight credits had been deleted. Sorry.

It’s a common problem. This summer, airlines handed out hundreds of millions of dollars worth of flight credits to passengers inconvenienced by record delays and cancellations. During the pandemic, they also pushed their flight vouchers on passengers with canceled flights.

But there was a catch: The credits expire.

Most flight credits last a year, but some disappear in as few as three months (here’s lookin’ at you, Frontier Airlines). If you have a flight credit, you might want to check your account now.

Airlines also can change their expiration dates without properly notifying you.

Let’s be clear about this: Almost all airline flight credits expire. The exception among major domestic airlines is Southwest, which last week removed the expiration dates on its flight credits.

Why do flight credits expire? Airlines argue that credits are unused tickets they must account for in their systems. They don’t want the liability of hundreds of millions of dollars worth of unspent flight credits on their balance sheets.

But the real reason is less complicated. I’ve spoken with airline insiders who say less than 10 percent of their customers redeem their flight credits. So effectively, when they give you a flight credit, they know there’s a 9 in 10 chance they will keep your money — legally.

Smithers was aware that her flight credit had an expiration date.But many passengers don’t know or don’t care.They accept vouchers for their flights and then forget about them.And there goes their money.

Warning: Flight credits can get complicated

Airlines are exceptionally good at keeping your money, and nowhere is that more true than with flight credits. It’s not just the expiration dates but the sheer complexity of the flight credits that can overwhelm the average customer.

Consider Smithers’ case. It turns out she didn’t have ordinary airline scrip but credits for a vacation package booked through American Airlines on Expedia.

Let’s unpack that. three layers to that flight credit: American Airlines and its vacation division, American Airlines Vacations, and Expedia. Each company could impose its own terms on her credit. It was enough to make my head spin. (Good thing fellow advocate Dwayne Coward, who is trained in the dark art of airline credits, could decipher it.)

Expedia’s records show that she’d booked a room at Grand Hyatt Kauai Resort and Spa and her flight with American Airlines. Then she had to cancel because of a COVID outbreak. But that’s not where the complexity ends.

Last spring, Smithers used part of the credit to book a new reservation on Expedia. Expedia converted the flight credits to new vouchers with a new expiration date of March 9. She says Expedia didn’t tell her about the new expiration date.

When she tried to rebook her vacation, Expedia said she was out of luck.

Expedia justified the expiration in an email it sent to the BBB about her case:

We regret to inform Mrs. Smithers that the credits are expired, which means the reservations can no longer be rebooked or refunded.

Only the airline can make exceptions and we do ask for those. In this case, the airline is not extending expired tickets.

Expedia says that it’s just an intermediary and that it is bound by American Airlines’ policies and its application of those policies. In other words, there’s nothing it can do to extend the vouchers.

There’s just one problem. Smithers has written proof that her credit runs out in October — a screenshot she’d taken after receiving the airline ticket credit. 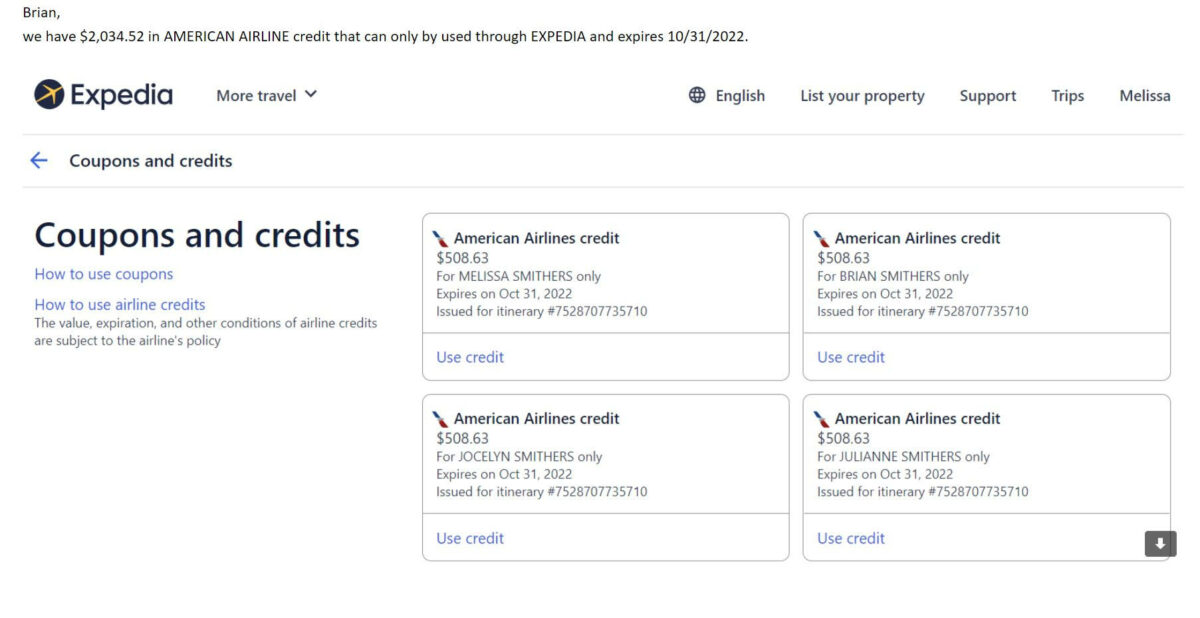 What do you need to know about flight credits?

There are several flavors of flight credits

Airlines often have more than one type of flight credit. For example, United Airlines offers flight credits, electronic travel certificates, and something called TravelBank cash (a kind of gift card). Each comes with its own terms and conditions. you flight credit, ask which kind you’re getting.

They have no cash value

Once you agree to a credit, you can’t convert it to cash or any other form of credit with the airline.

Airlines often reserve the right to reserve “refuse, void, cancel or reject” your flight credit. The fine print is written is written so vaguely that an airline could apply it to any flight credit for any reason. In other words, airlines can change the expiration dates on its flight credit — just check the terms.

Airlines have strict rules when it comes to flight credit. American Airlines, for example, stipulates that its credits are void if bought, sold or bartered, advertised for sale or used for commercial or promotional purposes. had cases where customers have lost their flight credit because they advertised their vouchers on Facebook.

Once they expire, they’re gone

Once flight credits have expired, they are almost always gone forever. (Except maybe when my team and I get involved). If you try to negotiate after the expiration, you will inevitably hit a wall of polite but firm “nos.” So don ‘t wait until after the flight credit expires to talk to your airline about a possible extension.

How to extend your flight credit

Notes: There’s been talk in Washington for some time that regulators will soon require that airlines end their expiration dates on flight credits. Southwest Airlines may have tried to get ahead of the announcement (and garner a little free publicity) by agreeing to something that was already in the works. Until then, here are some strategies that may help you recover some or all of your flight credits.

Ask before they expire

A brief, polite request sent to the airline’s “contact us” form is often enough to get your vouchers extended for a few more months. If you have an extenuating circumstance like an illness or jury duty, make sure you include documentation in your request.

Get help from your travel agent or advisor

Travel advisors have dedicated contacts at an airline and can often negotiate on your behalf. That’s true even if you’ve booked through a large online travel agency like Expedia or Booking.com. Again, a brief and polite email asking for an extension might do the trick.

Use part of the voucher to reset the clock

If you use part of your voucher for one flight, your airline can reissue the credit and reset the expiration date. In fact, Smithers’ situation usually works the other way around. Air travelers can automatically extend their credit by using part of the credit. Just make sure the new expiration date will give you enough time to make a new reservation.

Book a ticket and then change it

If you’re out of time, you can still book a ticket and change the date. Many airlines dropped their change fees during the pandemic, making this a viable strategy. Notes: Don’t try this with a “basic” economy class ticket, which is more restrictive.

If my flight vouchers expire before I can use them, can I dispute my ticket purchase on my credit card?

So let’s say you tried all these strategies and are still getting a firm “no.” What then? Can you file a chargeback on your credit card and get a refund?

Credit card chargebacks can help you when an airline makes an obvious error, like booking a flight to the wrong city. Here are a few details on how credit card disputes work.

If you can prove the airline made an error in calculating the value of your flight credits and would not fix the problem, you might have a case.

You might also win a credit card dispute if you can show that the airline did not live up to the terms of your purchase.

If the airline forced you to accept the flight credit (which happened at the start of the pandemic) you could also make a credit card dispute work.

And of course, if it promises you a flight credit — and you have that promise in writing — and then reneges, you can prevail in a dispute.

Many consumer experts claim that you only have 60 days to dispute a credit card charge. That’s half true. The Fair Credit Billing Act, which regulates chargebacks, requires credit card companies to give you 60 days after you receive your bill.

“I just want the value of my credit as was promised”

Smithers’ case had several layers of complexity. They involved three companies and more than one mode of travel. It was so confusing, in fact, that I had to ask one of our experts to help me make sense of it.

But in the end, her request seemed reasonable. She wanted Expedia to honor its original expiration date.

“I’m concerned that resolution of this issue might take a long time and we might then have an issue with the October 31, 2022, credit date,” she told me. I want the value of my credit as was promised.”

The key to this case was the notification. Did Expedia tell Smithers that she would have a new expiration date? There was no evidence that it had done so.

Smithers tried to advocate the case herself, reaching out to the Expedia executive contacts on our site. She also filed a complaint with the BBB. But Expedia’s answer didn’t change.

We reached out to Expedia to ask about Smithers expiring credit. Shortly after that, we heard from Smithers.

“I received an email from Expedia that I will be getting a refund instead of a credit extension,” she told me.

How airline flight credits should work

These airline flight credit problems should never happen. The federal government has the means to stop flight credits and vouchers from expiring. The Credit Card Accountability Responsibility and Disclosure (Credit CARD) Act already prevents gift cards from expiring within five years of activation. go even further. In California, for example, you can exchange your card for cash.

Passengers should always have the option of cash or flight credit

If a flight gets canceled by any party, the airline should offer cash or credit. Why would anyone accept the credit? Airlines would have to get creative, perhaps offering extra points or a higher credit value. Cruise lines did that during the pandemic with great success.

Airline flight credits should not expire

As we’ve seen with Southwest Airlines, the technology exists to make flight credits last indefinitely. The messed-up accounting is a red herring. If Southwest can figure it out, then so can the rest of the industry.

Flight credits should be exchangeable for cash

Why not take a page from California and require that passengers can exchange their flight credits for cash anytime? While California’s rules limit the amount of your exchange, I don’t see any reason to place any limits on such transactions.

Avoid accepting a flight credit at all costs

Bottom line: Never accept a flight credit if you don’t have to.

Chances are, you’ll never be able to use it. Your airline will keep your money, and there won’t be anything you can do about it. always ask for a refund, even if the airline has a policy against it. You can use cash to buy a ticket on any airline, and it never expires.

Artist Aren Elliott took expiring ticket credits to the next level in today’s series of illustrations. “It’s an explosive topic,” he laughs.