ENGLAND’S triumphant European champions celebrated their historic victory with a late night champagne and cocktail party which went on until 4am.

The Lionesses sensationally overcame rivals Germany after extra-time to end the country’s 56-year wait for a major trophy.

Sarina Wiegman’s elated side celebrated long into the night as they partied in the dressing room and then crashed their manager’s post-match press conference.

They carried on celebrating for several hours before emerging from the hotel on Monday morning.

The girls downed champagne and cocktails at the posh Lensbury Resort in Teddington, south west London.

Describing the celebrations, Wiegman told the Lionesses YouTube channel: “Crazy. Lot’s of drinking, lots of dancing. English people can drink! So a little bit too much alcohol, I think.

“But that’s OK. We are enjoying it. When you have this accomplishment it is really good to have a party.”

Appearing blurry eyed, Kelly emerged with her partner Scott Moore, who was wearing an England shirt with her surname on it.

When asked how last night went, she simply replied that it was “amazing”.

Most read in Premier League

She said at this stage FA instructions prevented her from talking further, but said she would be able to say more later.

She added: “Sorry I can’t say anymore but will later.”

Chloe looked happy with her partner as they put belongings in their car.

Other players have also emerged from the hotel this morning.

Goalkeeper Hannah Hampton was dancing as she left photographed by the media.

England captain Leah Williamson received massive cheers from dozens of fans as she emerged from the team hotel holding the Euro trophy.

Wearing a red beanie hat, Leah struggled to lift the silver trophy above her head.

Dozens of young children, many in England shirts, watched in awe as Leah held the trophy up.

The head of Women’s football at the FA Baroness Susan Campbell said many of the players – and manager – were ‘”worse for wear” and had just two hours sleep following the post match celebrations.

She said: “I think the party went on too long and lasted into the night. It ended about 4am. All the players, their families and friends were there. It was wonderful.

“It was a wonderful evening that went on far too long.”

Campbell said the victory would prove an inspiration to a generation of young girls.

She added: “The joy, the happiness and brilliance of the players and Sarina’s absolute brilliance made it all worth it. She is an exceptional human being.”

Speaking about the late night party, one hotel guest added: “When they arrived last night it was an amazing atmosphere.”

The guest said the bash went on until 4am, meaning they’ve had just a few hours sleep.

They added: “Everyone was so pleased, it was fantastic. They were on such a high.”

He said: “We’re very happy…all the girls just, I think they know that they kind of created history, I guess, and I think they enjoyed it last night. 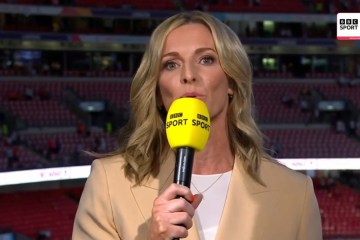 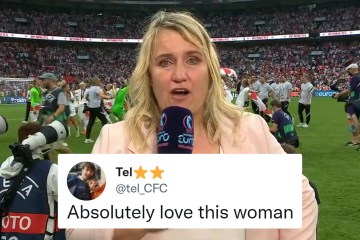 “It was fantastic. Everyone was very happy.”

Dressed in a white t-shirt which said “man” in red lettering above the Nike swoosh, he said he was “unbelievably proud of Leah. I mean, not just her, the girls have just done amazing”.

He said there was “a little bit of singing” as part of the celebrations last night as the girls were “just releasing a lot of tension” following weeks of hard training.