The morning of day 22 saw me limp into the town of Woss, crying. On top of the pain of my swollen ankle, I felt depleted of all my energy. Although I wanted very much to just spend aa night in the little motel there and continue on the next day like I had planned, I realized that I just couldn’t – pushing was not going to help my ankle, or any of the other pains I was experiencing.

So, I called my mom. I was, and am, so grateful that she was so willing to support me by driving the 4-hour round trip to pick me up and let me stay at her place again – this time, for a whole week.

Yes, I took a whole week’s vacation from the trail. But my body really needed it – my hot, swollen ankle needed more than a half day’s rest and I knew it, much as I hated to admit it. Although mentally I could handle the challenge of long-distance days, I guess my body was not quite there yet. But those first few days of rest almost drove me crazy. I had already decided to give myself a week to fully recover, to make sure I didn’t rush back into walking too soon. But the week stretched before me like an abyss; the amount of empty time looming before me felt daunting. What was I supposed to do for a whole week? Without the purpose of a daily destination to hike towards, I felt lost. I hadn’t planned to fill my time with anything else but the journey.

Consequently, it took me a while to relax into recovery. It helped that the weather was warm and there were opportunities to enjoy the outdoors in the seaside town of Courtenay without using my feet too much. I borrowed a bike and rode it to Lake Comox and around the rural areas. We took the paddle boards out to the lake and on the ocean. I spent a day in town getting supplies (which included a pile of new books – I couldn’t help myself) and inhaling a giant ice cream sundae.

Once I accepted that I had to do nothing, because that was the purpose of my vacation, in order to heal, I felt a little better about being so idle. By the end of the week, the swelling disappeared. I taped up the lump that still remained above my heel and hoped that it would not get too fussy when I started back up again.

Easing Back Into It

So when my mom dropped me off in Woss on day 29, a week after I’d been rescued from that very place, I decided to actually try to take it slow for the next leg to ease back into the rhythm of walking. The next leg, from Woss to Port McNeill, largely followed an old railway grade parallel to the highway through the Nimpkish Valley. Being mostly flat walking, If things were different I could totally smash it in 2.5 days, but I decided to give myself 4 to finish it instead. I was in no hurry; I had lots of time.

The old rail system snaking through this part of the Island had previously been used to haul logs for a hundred years before the tracks were dismantled in 2017. The bare grade was nice and flat, but in many places the gravel turned to large pebbles the size of my hand, which hindered my pace a little due to the slippery-slidy-ankle-twisting hazard.

Continuing on the trend of the last week, it was hot out – over 30C. I poured sweat as I clumsily shuffled over the hot white rocks that reflected the heat back up – I was getting sizzled from above and below. As the grade curved this way and that, I jumped from side to side, catching the shade where I could.

The grade crossed the highway a few times, and I was surprised to find that some of the bridges had no railing! I guess it makes sense though, if it’s a train on tracks flying past, a barrier probably wasn’t necessary. How funny it was that a simple lack of barrier between me and the drop down to the road made me so nervous, even though walking in the middle of the bridge put me a safe few meters away from each edge. 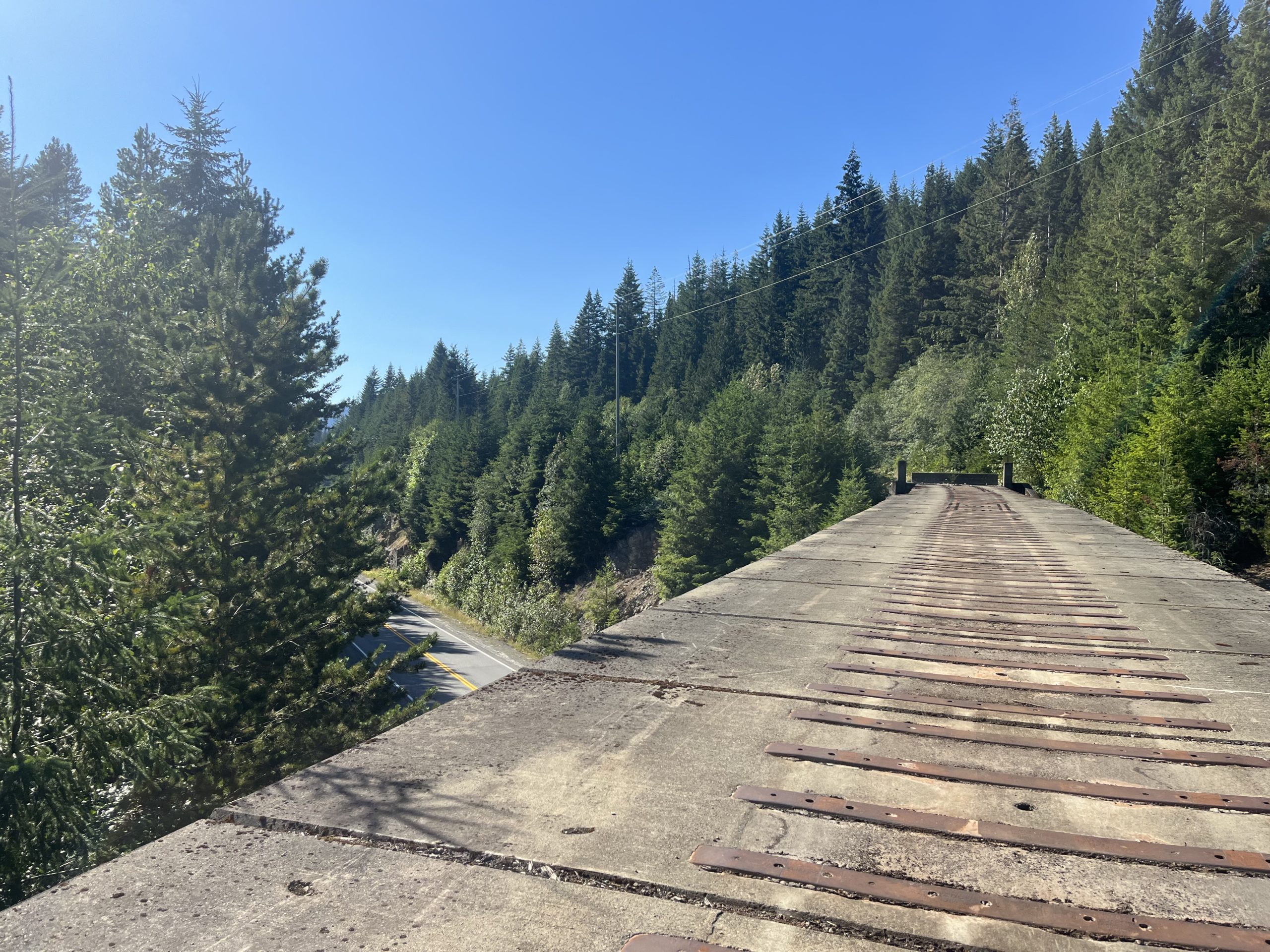 I started day 30 at my usual time, just after 6:30am, in hopes of getting my short distance done for the day before the heat came on full blast. I followed the Nimpkish River closely for a while before jumping to the other side of the highway and bending north. The sounds of cars and large freight trucks bellowed from just behind the trees – the same sounds that penetrated my dreams the night before, as I slept near the grade adjacent to the road. 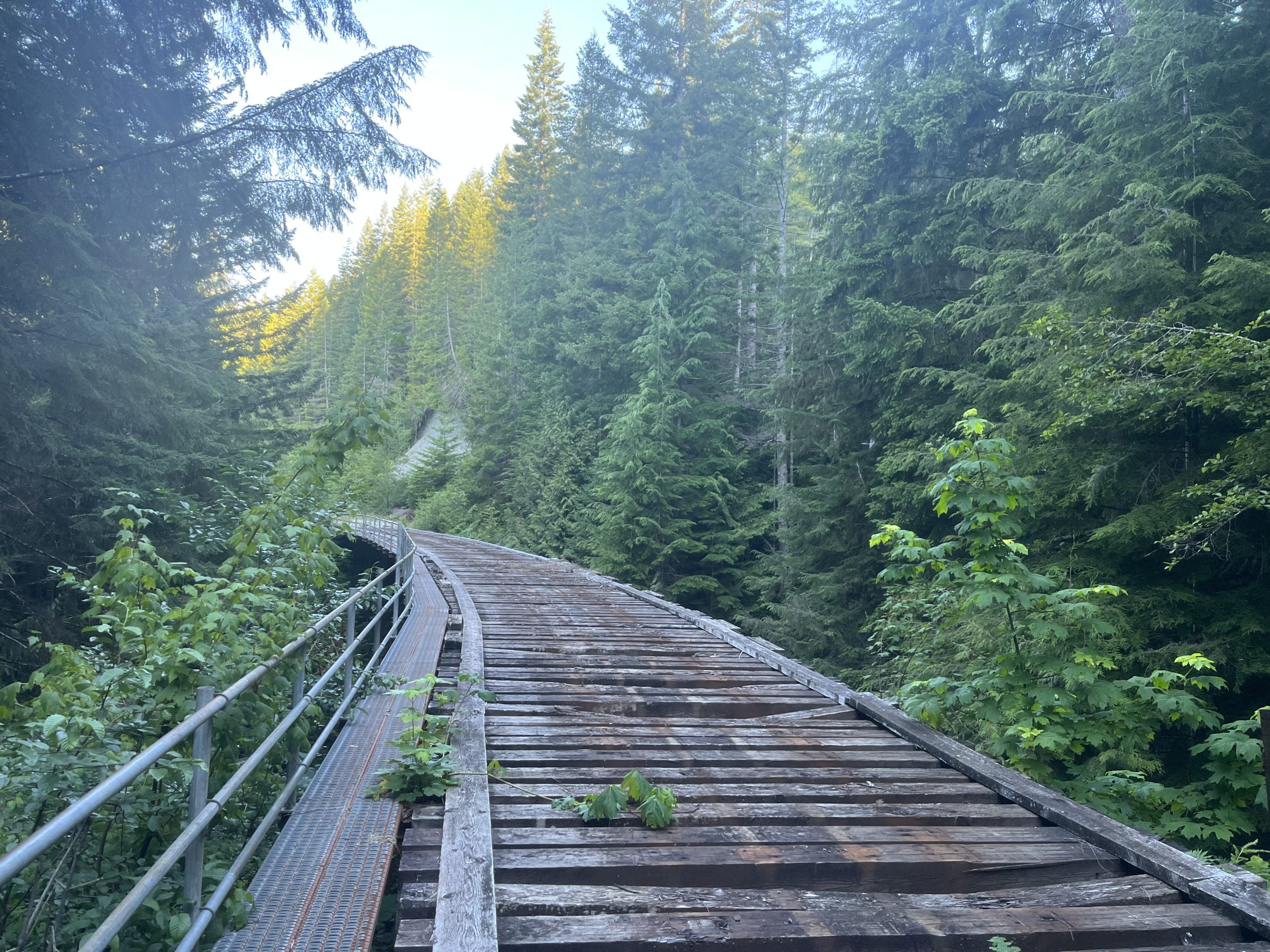 A cool bridge over a creek

I saw a few bears, which ran away when they saw me. I guess I was wrong to assume that wildlife sightings would be less frequent, now that I was so close to the roaring highway. 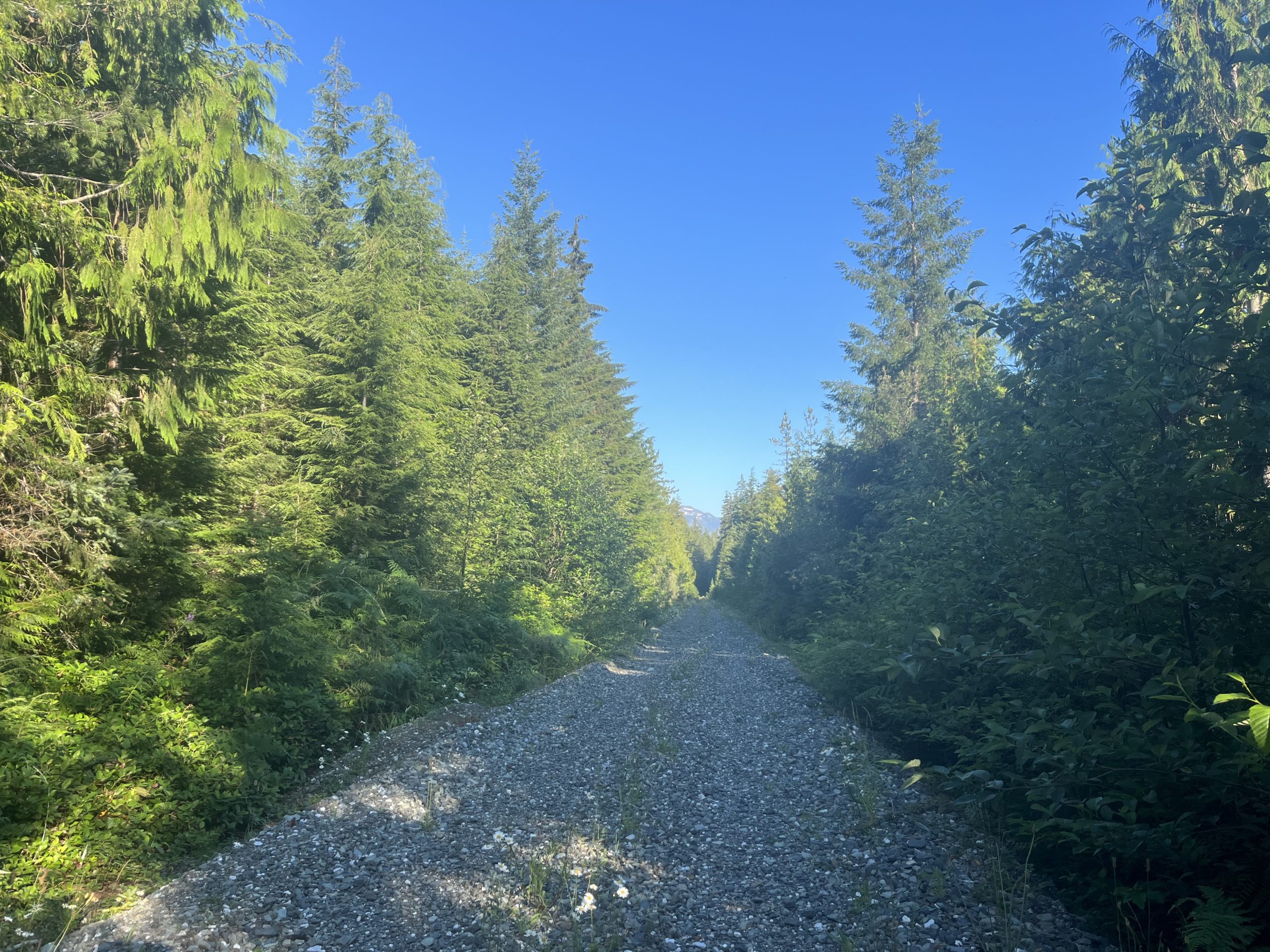 I arrived at my campsite at 11am, with plenty of time to read my new books, nap, stretch, and take a short walk to check out Nimpkish Lake.

The 23km-long lake reaches from the south end where I stood almost to the ocean, lined on both shores by mountains. This geography creates a funnel for wind coming from the coast to speed inland across the lake. Indeed it was pretty windy down there, and there were some windsurfers to be seen with their colorful parachutes dipping up and down above the rippling water. The waves and the expansiveness of the water from the pebbly beach almost fooled me into thinking it was the ocean, except for that the drinking water I filtered from it wasn’t salty. 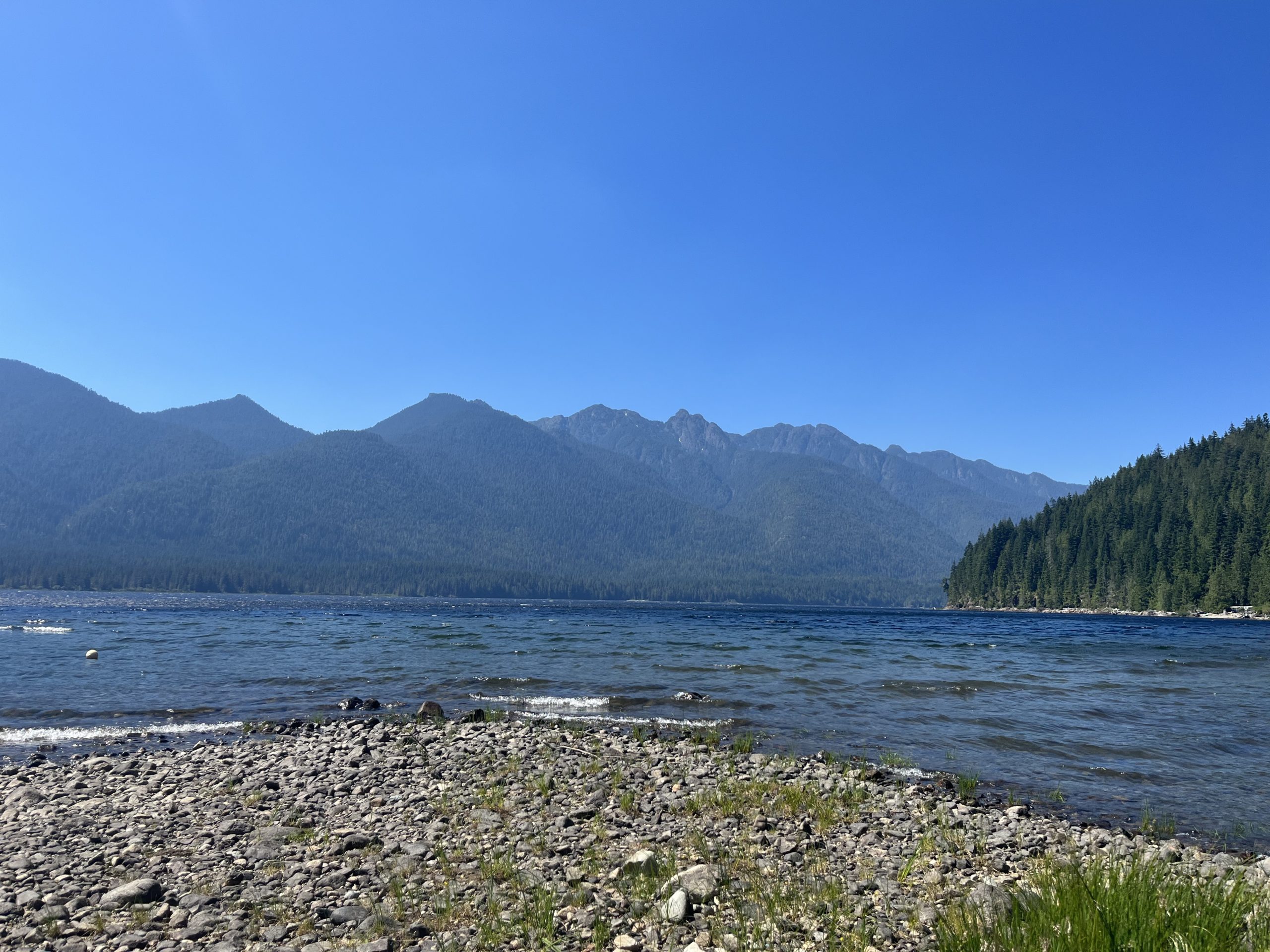 The south end of Nimpkish Lake

All the time I had to think about the next day made me edgy. At this point I was frustrated with the patterns of my own emotions. I was tired of getting anxious about my plans, where I was going to camp next, how far I should go, and being worried about scary things happening. Tired of it! Although the last 24 hours had not been as frantic inside my mind as some previous parts of this trip had been, I was really hoping that I would be over the nervousness by this point.

But, reflecting back, I realized maybe my expectations of how this thing was going to go were probably skewed. Maybe it was unrealistic to expect the whole journey to be a relaxing, enjoyable time, filled with tranquility and joyful communion with nature. I started out and quite unexpectedly had to face a darkness that threatened to strangle me.

I had learned so many things in the last 30 days – some things that could be articulated, and some that couldn’t. But at the same time, it was hard not to feel like I was going around in circles. In my tent in the cool shade of the evening, once again, I sat in the discomfort of it all. The simultaneous anticipation and dread of waking up to whatever the next day would bring. I tried to feel it all without judgment – but, being so invested in my completion of this journey, that was a hard thing to do.

Onwards into the next day I inevitably and irreversibly marched. I was confronted with the joy and sadness of the thought of it all being over in just a few weeks. Being a human is to be paradoxical. I just wished I could turn my brain to ‘simple’ mode, to get a break from the pain and confusion that living in such a state brought along with it.

This website contains affiliate links, which means The Trek may receive a percentage of any product or service you purchase using the links in the articles or advertisements. The buyer pays the same price as they would otherwise, and your purchase helps to support The Trek’s ongoing goal to serve you quality backpacking advice and information. Thanks for your support!

To learn more, please visit the About This Site page.