OSHKOSH, Wis. – US presidents have been using the airplane as a principal source of travel since the 1940s. And you’ve probably wondered, what goes on in Air Force One, anyway?

What You Need To Know

Here are their top stories:

US President Bill Clinton waves on arrival at Selfridge Air National Guard Base after his first flight aboard Air Force One and his first out of ton trip as president in Mount Clemens, Wednesday, Feb. 11, 1993. The president spoke to a rally of about 200 people in a hangar before departing. Clinton went to a television town hall meeting at a Southfield, Mich., Television studio. (AP Photo / Greg Gibson)

“We were going to a Middle East summit in Egypt and President Clinton invited King Hussein [of Jordan] along on this trip. King Hussein drove up in a couple of limos, he climbs on board and we get a panic phone call up in the cockpit. ‘He’s coming up the stairs. He’s coming up to the cockpit. ‘ Well, sure enough, the King came up to the cockpit, sat down in the jump seat and strapped himself in. Wow, that’s unusual. Then the President came up, and the King was looking out the window just like we did from upstairs and watched the President do his thing down there with the wing commander, then gets on board the airplane. And so we figured, ‘OK, show’s over. King’s gonna leave. ‘ No, we started the engines, taxied out, took off, climbed to our cruise altitude and leveled off. And then the King said, ‘Well, I guess I should go down to say hello to the President.’ That was pretty impressive. “

And what did Hussein say to the pilots when he left the cockpit? You know it.

Lussier admitted he was in the right place at the right time on May 1, 2003, when he flew then-President George W. Bush aboard the USS Abraham Lincoln on an S-3B Viking. Bush was to give a speech, welcome the crew back after an extended deployment and announce the end of major combat operations in Iraq.

Lussier was given the assignment only a few days before, and it was going to be just a 15-minute flight. 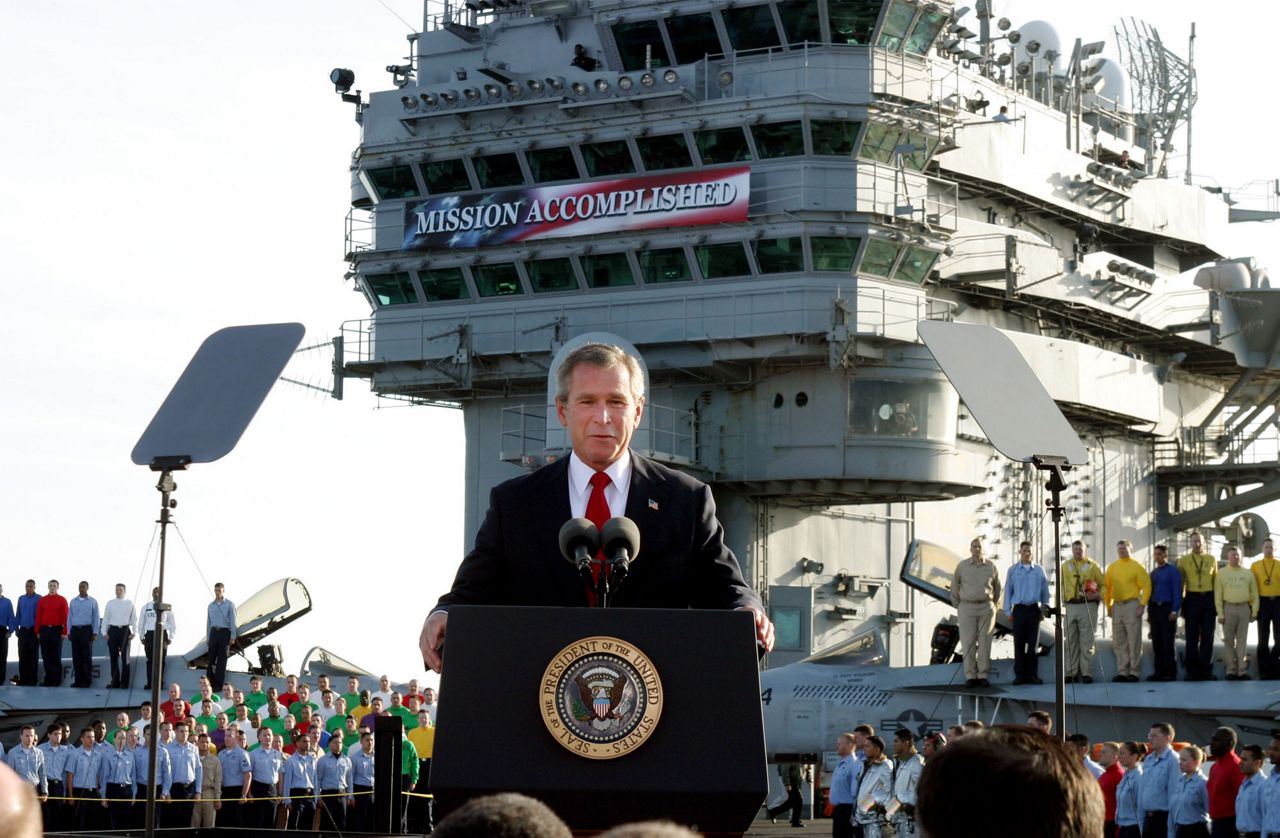 President Bush declares the end of major combat in Iraq as he speaks aboard the aircraft carrier USS Abraham Lincoln off the California coast, Thursday, May 1, 2003. The carrier will arrive in San Diego in this May 2, 2003 file photo, following a record 10-month deployment including “Operation Iraq Freedom.” (AP Photo / J. Scott Applewhite, file)

“The next few days were a whirlwind of me finding out about how important the protocols, the advanced teams, the intricacy of flying the President. But one thing that they were very strict about was the timeline. And I kept saying. ‘Look, this is not your normal travel stop. This is unique. He’s gonna fly on an ejection-seat airplane for the first time in 30 years. [Bush was an F-102 fighter pilot with the Texas Air National Guard.] I need a crew brief. ‘ So they kept saying, ‘Well, you get five minutes.’ I said we usually brief for an hour. And we finally got 25 minutes. “

“He comes over and shakes my hand. And then we put him into an ejection-seat simulator. So we start talking about the flight and mission and we get to the point of talking about emergencies, and I said, ‘You know, Mr. President, 99.9% of the time everything goes really smoothly in naval air, but there’s always that .01% chance.’ He says, ‘Luss, you don’t need to worry about that. We got a great Vice President.‘I said,’ Well, if you’re not worried. I’m not worried. ‘”

“I said, ‘But if we have to get out of the airplane and you pull your ejection handle or I pull mine, we’re going to be out of the jet in four seconds and swinging in our shoots in five.’ And he goes, ‘Yeah, and sh * ting in six.’ I’m just like, ‘the President said’ sh * t. ‘”

”We wrap up the brief, and we walk out to the airplane and one thing the Secret Service absolutely says, ‘You will maintain positive control of that airplane the whole time. You will not let the President fly. ‘”

“So I said, ‘Mr. President, do you want to fly? ‘ He said, ‘Why, sure I do.’ So he takes control of the airplane and the first thing he says to Eddie, the Secret Service agent, ‘Alright Eddie, I got the controls, don’t get nervous.’ And so he shakes the airplane around real violently. He yanked that guy’s chain all the way out to the ship. “

“We parked the airplane. And at that point the protocol people said, ‘Hey, make sure you tell the President to take the flight gear off.’ And I said, ‘Mr. President, they want to take the gear off. ‘ And he says, ‘I feel pretty good. I think we’ll keep it on. ‘ So he gets out of the airplane in full flight gear regalia. And we get out in front of the jet and we’re just supposed to kind of stay off in the background. He’s a very caring and generous guy, he calls us over and we stand in front of the airplane. He goes to shake my hand and goes, ‘Son, you’re on national television.’ “

Tillmann was the pilot on 9/11. The first harrowing moment for many that day occurred when they left the airport in Sarasota, Fla. 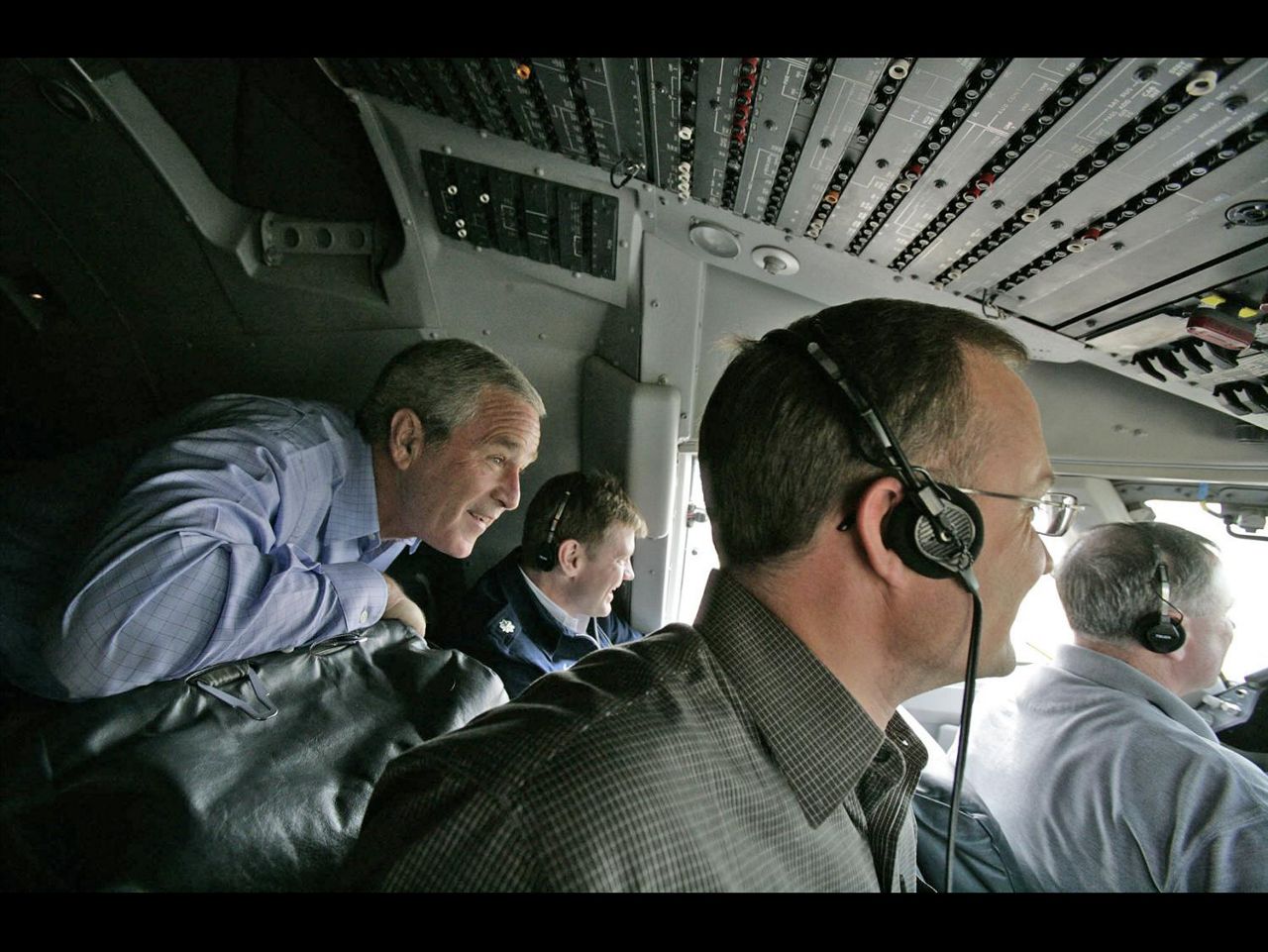 US President George W. Bush rides in the cockpit of Air Force One on the final approach before landing in Baghdad, Iraq. (AP Photo)

“One of the challenges leaving Florida was the FAA told us there was a plane overhead descending into us. They assumed we were the target. So when we took off, the goal was to outmaneuver that plane, fighter support was coming in, and then we were going to get as high as we could. The airliners usually don’t go into the high 40s. So we’re gonna go into the high 40s and get him back to Washington, DC Kind of the funny part was our job was to relocate the President. But the President, when he found out about it, countermanded the orders and said there’d be no way he’s going to hunker down. “

Tillman said he’ll never forget what transpired in the days, weeks and months that followed.

”It was just so neat to watch the United States of America come together. Every location we came to. Everybody was chanting, ‘USA, USA’ no matter where we went. Didn’t matter whether you’re Republican or Democrat, ethnicity, anything. You were Americans and everybody was out at the side of the plane at every event the President went. “

“A quick example, we go to Cedar Rapids [Iowa], we pull in, there’s a little kid with a sign. It says, ‘Put me in coach.’ When the President gets off, he sees the little guy and he walks over and then he starts talking to the crowd. And then the little guy, when everybody leaves, the President goes into the city, the little guy comes walking across the ramp with the sign. He ends up talking to our top cop and he said, ‘Hey, the President said I can take a tour of Air Force One.’ And we all know President Bush didn’t say that. But it was so neat. We said, ‘Of course, you can have a tour young man.’ And then all of a sudden he yells behind him, ‘They said we can have a tour!’ And 40 of the finest t-ball families came out and we gave them tours all day long. But that was what America was about. “