WALLACE — It was the grandest building in Shoshone County — by a margin that wasn’t particularly close. But, unlike so many other buildings in the historic city, it did not endure.

The Samuels Hotel was completed just prior to the summer season in May 1908, and for owner Henry Floyd (HF) Samuels, humble beginnings gave way to historic gains, many of which he never saw coming.

Born in 1869, in Mississippi and then subsequently raised on a farm in Indiana, Samuels walked himself 5 miles a day to attend school — this led him to law school at the University of Michigan.

After completing his schooling, Samuels made his way to Idaho where he began a law practice in Grangeville before moving to Wallace in 1895.

During his time in Wallace, Samuels was the city attorney, superintendent of schools, and Shoshone County’s first prosecuting attorney.

Being an educated, highly intelligent man, Samuels dipped his toes in many different business ventures throughout the years — all with varying levels of success — including banking, mining, show business, clothing, and of course, as a hotelier.

The corner of Seventh and Cedar streets, not quite the epicenter of the city, but not far from it made for the perfect location for a new hotel.

While the surrounding towns in the area all had their specific charms and personalities, they all maintained an uncivilized rough and tumble exterior that was customary for a mining town in the west.

Nestled snugly in the crook of the mountains, Wallace made itself Shoshone County’s metropolitan capital, where people could live and enjoy a more high falutin lifestyle — just a few miles from their more rugged counterparts.

A city like this, laden with theaters, restaurants, houses of ill repute, fashion and shopping from across the country needed a crown jewel and HF Samuels gave them just that.

The five-story structure featured 150 rooms, including 25 luxury suites, and before too long the five-star hotel became the envy of every city in Idaho.

The hotel would feature a bar, cafe and a barber shop in its magnificent marble lobby.

It also had an ornate iron, birdcage-style elevator that took guests from floor to floor.

It was also the site of a bit of controversy.

In 1916, Wallace Mayor Herman Rossi shot Clarence “Gabe” Dahlquist in the lobby of the Samuels Hotel. Dahlquist would succumb to his wounds and the ensuing murder trial captured the attention of much of the region and all of Idaho.

Courtney Frieh, a local with a passionate interest in the Samuels, spoke about the building’s beauty and mystique — while also reveling in the history.

“The Samuel’s Hotel was such a massive, impressive structure,” Frieh said. “It’s hard to believe a five-story hotel with a gilded elevator and glamorous lobby could even exist there. The dramatic history, from the Rossi murder, to million dollar mining deals made on a handshake, to bootlegging activities and prominent guests, is intriguing and timeless. Despite its prominence, very little documentation exists about its history and demise so there’s much mystery to ponder.”

Early in its relatively short, 66-year life, the Samuels served a greater purpose than it had ever been intended.

Sure it had been used by the stars of the stage and cinema — both local and from across the county, but it also saved the city of Wallace.

In 1910, a great fire made its way to Wallace, sweeping down the hillsides of the city’s south hill, destroying countless buildings and homes. But when it arrived in the downtown area, three buildings, the Samuels, the Worstell Building (corner of Seventh and Bank Street), and the Shoshone County Courthouse — all three made of stone — acted as a firebreak and forced the fire away from the rest of the downtown area.

Over the years several businesses would come and go from the lobby area of ​​the Samuels — in fact, the Metals Bar got its start in the Samuels lobby before making a few different moves to its current location.

HF Samuels would go on to sell his hotel in 1912 as he and his family headed north to Sandpoint.

The hotel would change hands a few different times after that, including the Stansfield family from 1917 to 1946. It was then purchased by Austin “Pappy” McFee who ran the hotel until the early ’60s when he could no longer afford to pay the taxes on the building.

Wallace, which had a population of more than 4,000 people in the 1940s, was clinging to just barely above 2,000 in the 1960s — which seriously reduced the need for such a large and extravagant hotel.

McFee himself had a rather fun backstory with the Samuels. He was arrested during Prohibition for using the hotel in a bootlegging operation.

The county sold the hotel to Harry Magnuson, who then sold it to the Michielli Brothers of Spokane in 1967.

The Michiellis closed the hotel a month after purchasing it, but allowed railroad workers to use the rooms when they made their way through Wallace until 1969.

The state of Idaho would then purchase the Samuels from the Michiellis — and it was speculated that efforts would be made to repair the building — which had several leaks in the roof and required a number of other upgrades — and then the building would be used as low income and indigent housing.

As the number of repairs continued to mount, the possibility of losing the hotel forever seemed to grow more and more possible, but in the early 1970s whispers began to grow of a massive highway expansion that was set to rip through downtown Wallace.

This was the death knell for the mighty Samuels.

Even though a historic effort would later be made by the late Harry Magnuson, who fought to get the entire city listed on the National Historic Registry — in 1974 the decision was made and the Samuels Hotel was razed.

One of the great mysteries in Wallace even with the repairs that were needed for the building, if that decision had been delayed by just a few short years, would the hotel still be here today?

Frieh feels a particular pull towards the Samuels because she feels that it’s the efforts of preservation in Wallace that differentiate the community from the rest of the Silver Valley — and the ultimate demise of the hotel serves as a reminder of the importance of preservation.

“Preserving Wallace’s history and historic architecture is a worthwhile endeavor,” Frieh said. “We have our historic code to thank for keeping the charming, original look of our town intact all these years. It’s what makes us unique and sets us apart from other small towns around the Silver Valley and the country. Although the Samuels Hotel is gone, preserving its legacy is important because its architecture was groundbreaking for the time and so much colorful history unfolded there — history that shaped Wallace and the whole region.”

The lot where the Samuels once stood has been converted into a charming green space, lovingly called Harry F. Magnuson Park, which stands as a stark reminder of the beauty that surrounds downtown Wallace, as well as representing the beautiful edifice that once dominated the corner of Seventh and Cedar streets.

As the 50-year anniversary of the building’s demise approaches, a group of Wallace residents have made it their mission to never allow the Samuels to be forgotten.

Frieh and Dick Caron, both of whom contributed heavily to the historic portion of this story, along with Jim See — having been working diligently for the past few years and in just a few months will be placing a memorial sign at Harry F. Magnuson Park .

The sign will feature historic photos and a detailed timeline of the history of the Samuels Hotel — the good, the bad and the down right scandalous.

“I really enjoy and appreciate the educational signs around Wallace,” Frieh said. “They add to the richness and unique character of our town and provide historical context to residents and visitors alike. I think adding a sign about the Samuels Hotel will add another fascinating aspect of our rich history and help keep the legacy of the Samuels alive for all to ponder and enjoy.”

The plan currently, is that the Samuels Hotel sign will be unveiled during Wallace’s Fall for History festival at the beginning of October.

Both Frieh and Caron hope that by seeing the sign, that the older generations of Wallace residents and former visitors who remember the Samuels will take a minute to tell their stories of what was the grandest hotel in Idaho. 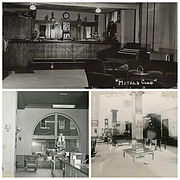