The show schedule will remain the same for both days. All acts and times are subject to change without notice. The air show will take place regardless of rain or shine. However, the flying schedule of the show will adjust if necessary depending on the weather.

The US Navy Blue Angels and the US Army Golden Knights (pictured) are among the celebrated flight teams at CenterPoint Energy Dayton Air Show at Dayton International Airport in Vandalia on Saturday and Sunday, July 30 and 31.

The US Navy Blue Angels and the US Army Golden Knights (pictured) are among the celebrated flight teams at CenterPoint Energy Dayton Air Show at Dayton International Airport in Vandalia on Saturday and Sunday, July 30 and 31.

The Blue Angels’ first performance was held June 15, 1946, in Jacksonville, Florida. Thrilling audiences for over seven decades with high-energy demonstrations, expect an exciting routine with sharp choreography. The fastest speed during their performance can reach up to 700 mph and can fly as close as 18 inches apart.

This demonstration team from South Carolina performs precise aerial maneuvers to display unique and interesting abilities of the F-16 otherwise known as the Viper. The F-16 is a one-seater that can switch from an air-to-ground or to an air-to-air role by simply using one button.

The Viper Demonstration team appeared in Dayton over a decade ago. Added tidbit: the wheels and brakes of the F-16 are made in Troy.

Kent Pietsch Airshows has been added to the featured performers of the 2022 CenterPoint Energy Dayton Air Show Presented by Kroger. | CONTRIBUTED 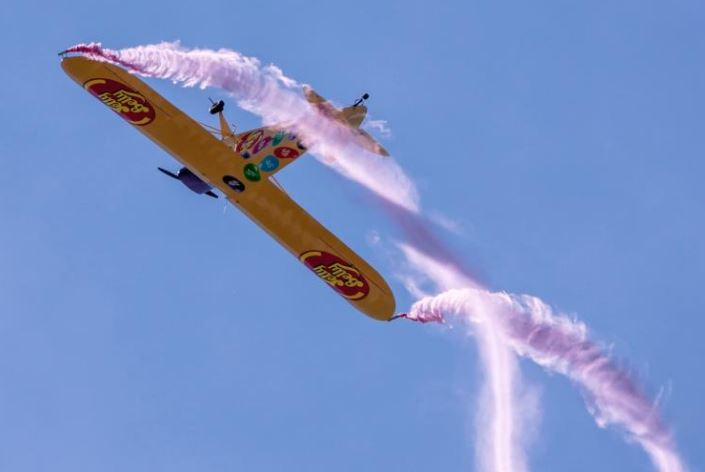 Kent Pietsch Airshows has been added to the featured performers of the 2022 CenterPoint Energy Dayton Air Show Presented by Kroger. | CONTRIBUTED

The F-15C Eagle is an all-weather tactical fighter constructed for ground, support and air-to-air combat. This dynamic team will fly a number of bold patterns.

The 16-member Army Golden Knights will open the Dayton Air Show. The team is known for their detail-oriented canopy work along with their skydiving formations and landings that will need to be executed precisely.

ExploreSUMMER POOL GUIDE: Where to take a dip when temperatures rise in the Dayton area

This performance will be a recreation of the December 7, 1941, attack on Pearl Harbor. The emotional recreation will involve realistic explosions, fire, smoke and more.

Raised in a family of air show pilots, Kevin Coleman, 29, began airplane aerobatic flight lessons at the age of 10. He went solo at 16, earned his pilot’s license at 17 and flew in his first air show at 18.

Visitors to the 2021 CenterPoint Dayton Air Show enjoy the static displays and tours of the airplanes on display. BILL LACKEY/STAFF 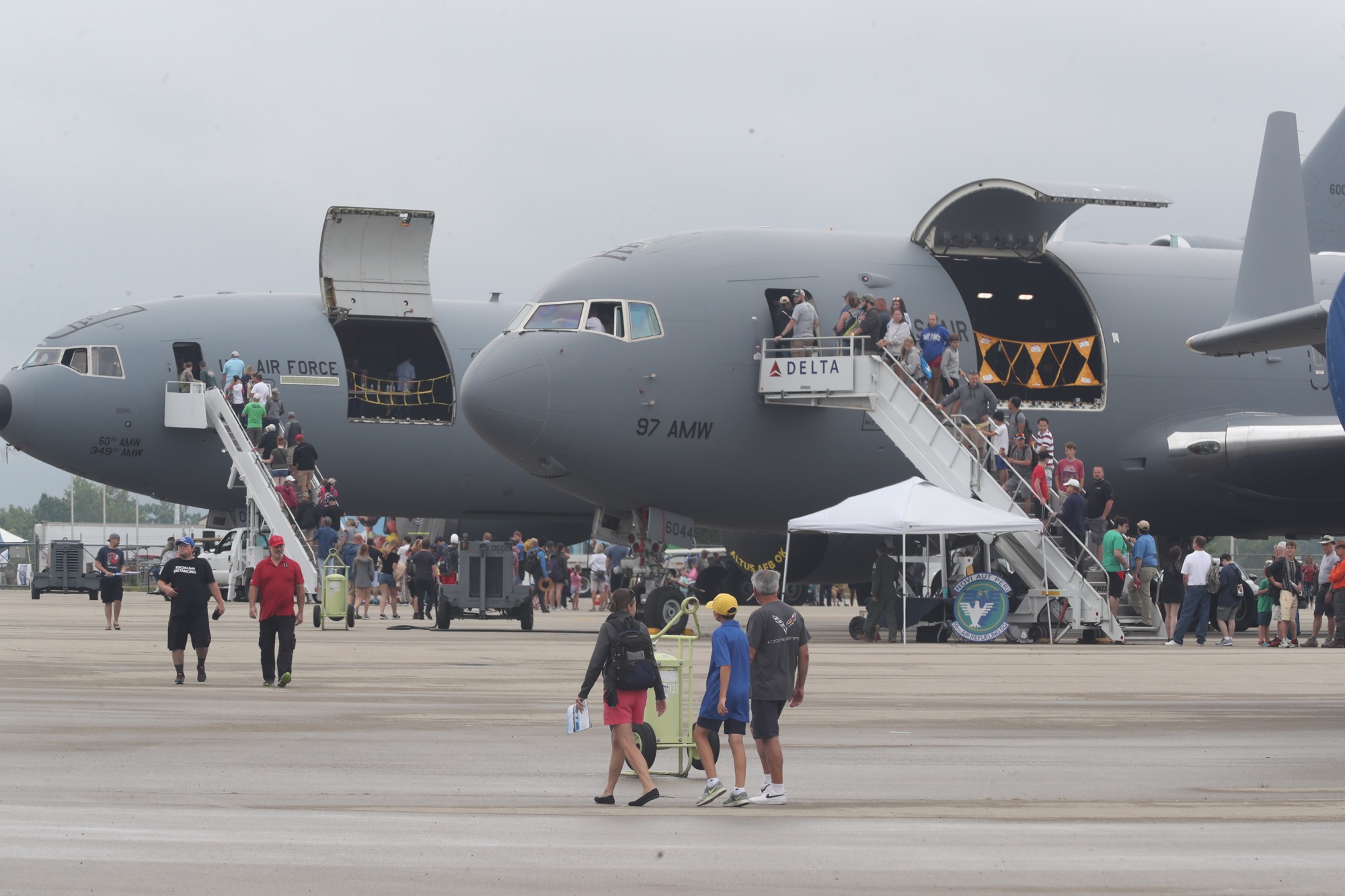 Visitors to the 2021 CenterPoint Dayton Air Show enjoy the static displays and tours of the airplanes on display. BILL LACKEY/STAFF

Aside from aerial performances there will be many planes you will be able to see within arm’s reach. With over 30 ground displays to choose from, the air show provides many different aircraft to appreciate. A few of them include but are not limited to the US Air Force B-52 Stratofortress, US Air Force F-15 and the US Army CH-47F.

The CenterPoint Energy Kid’s Hangar will be open daily from 9 am to 6 pm Children will have the opportunity to play in sandboxes, enjoy face painting and participate in crafts. This free all-day activity for kids is a great time to take a break from the heat. Air Show performers might stop by the Kids’ Hangar to sign autographs.

Food, beverages, and restrooms will be nearby. However, all children must be under parental supervision to enjoy the CenterPoint Energy Kids’ Hangar.

If you are starting to feel hungry while enjoying the show, don’t worry. Food concessions will be available. In one location on the show grounds, complimentary water will be provided in addition to ATM machines.

Get ready to have an experience of a lifetime. The Army Aviation Heritage Foundation will return again this year to provide rides. For a $110 donation participants will be able to climb aboard UH-1H “Huey.” Anyone choosing to ride can fly with up to 10 passengers and a veteran pilot for 10 minutes.

If you’re seeking an even more intense ride, a 10-minute solo ride on the AH-1F Cobra for $625 could be a true adventure.

Riders are first served. No advance reservations will be accepted. You can find more information on helicopter rides https://daytonairshow.com/huey-cobra-helicopter-rides/.

General admission tickets, priced at $20-$30, are available online, at a Kroger near you or can be purchased at the gate. Tickets are to be used for one day. Children under the age of 5 have free admission.

All ticket sales are final. Refunds and rain checks are not available. There are a variety of ticket options to choose from. In particular, the Synchrony Family 4-Pack is available for $99 and includes four general admission tickets, four hot dogs, four Cokes, one general admission parking pass and one official souvenir program.

Explore10 fun places to make the most of your summer

WHERE TO PARK AND HOW TO GET THERE

You are advised to arrive early to avoid heavy traffic. General admission for parking is $15 per car and $25 for RVs, buses and other large vehicles.

Take Exit 64 Northwoods Blvd from I-75. Follow signs to appropriate lots. Stay in the right lane.

More information on parking can be found at https://daytonairshow.com/parking-and-directions/.

WHAT TO LEAVE AT HOME

Food is not prohibited but it must be wrapped in clear wrapping and not in a cooler. Other items such as chairs, strollers, wagons, cameras, blankets, and handheld umbrellas are allowed. For more information on what to bring or what not to bring, visit https://daytonairshow.com/restrictions/. 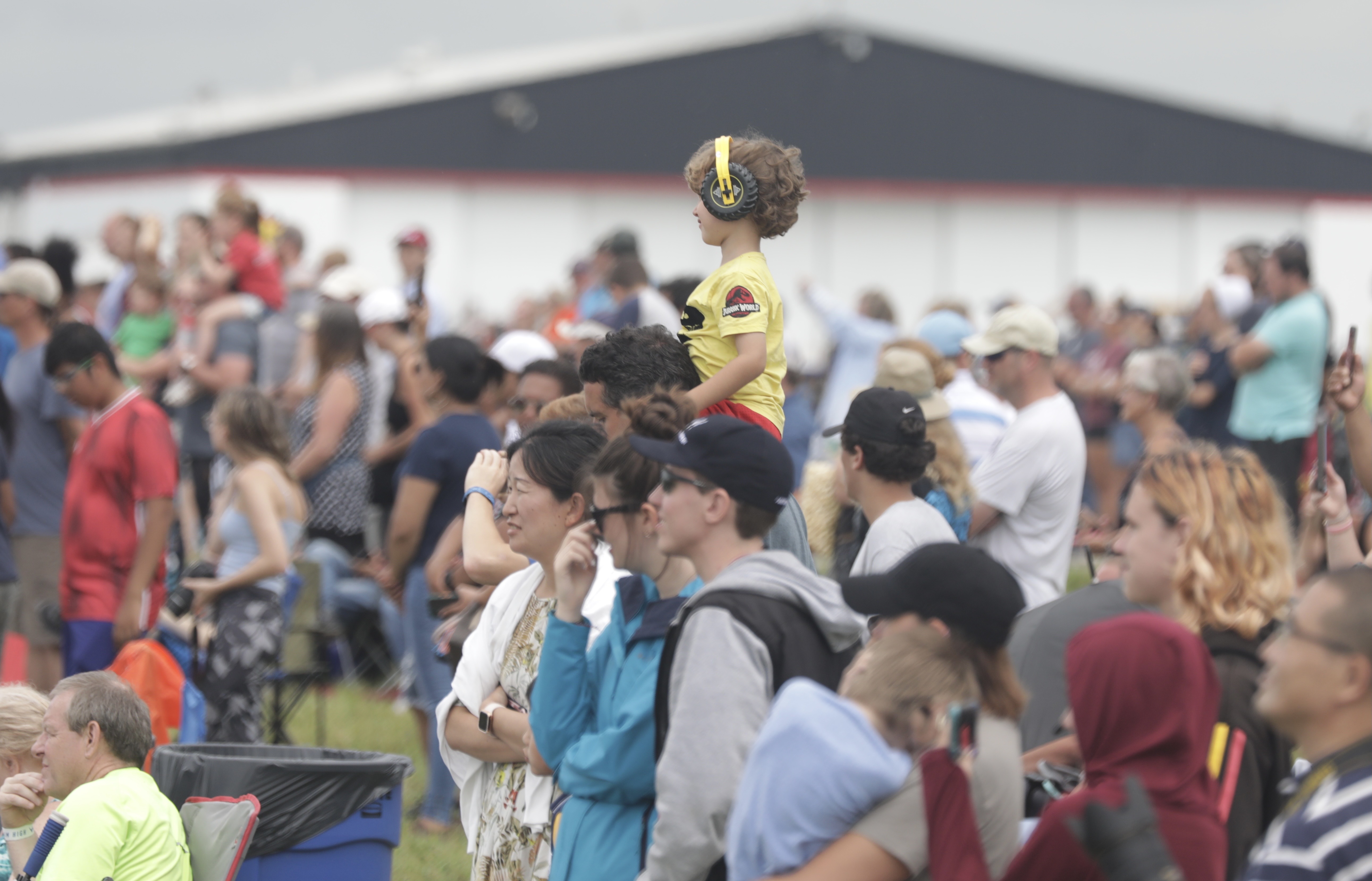