With Covid-19 flight restrictions all but lifted in many parts of the world, a phenomenon known as “revenge travel” has since taken over, where globetrotters — Singaporeans included — are making up for lost time.

The greater demand has also given rise to outrageous ticket prices, with internet searches showing sky-high fares for many routes, Bloomberg reported.

So what’s one to do if you don’t have a similarly sky-high budget?

One Singapore-based TikTok user recently shared a hack to get cheaper air tickets on the video platform. Her video posted on July 11 has since garnered close to 22,000 views.

Captioning her video “how to get cheaper flights by cheating the system”, TikTok user Winnia.je took viewers through a step-by-step process to get cheaper tickets “that nobody knows about”.

Through her method, one can “save about $40 on a one-way ticket to Bali”.

Her secret, it appears, is to use Skyscanner, a metasearch engine and online travel agency, but not in the way you might expect.

The real trick, as she goes on to demonstrate, is to use the Skyscanner website that is hosted in the destination country. So rather than booking from skyscanner.com.sg if you’re traveling to Bali from Singapore, one should head to skyscanner.co.id instead.

And instead of paying $219 as indicated on the website for a flight, the same flight is going for approximately Rp1,923,201, or about $180, netting her savings of about $40. Winnia.je also made sure to put in a disclaimer that the video was #notsponsored.

So, does her hack actually work when we tried it out ourselves?

Well, yes and no. What we found was that ticket prices were more or less the same, or cheaper by a negligible few dollars.

In some cases, for example when attempting to book a flight to Bangkok on Oct 31, flights on skyscanner.co.th were actually more expensive (3,133 baht or $118), than on the Singapore-hosted site ($89).

Another pro tip mentioned by a TikTok user in the comments section of Winnia.je’s video, however, is to not only try Skyscanner’s website from the destination country, but basically any country.

While it takes some effort, it’s probably still worth a shot.

Others shared that the hack only works if the destination country has a weaker currency or is economically less robust than Singapore.

And while being able to score cheaper tickets through Skyscanner is supported by other travel bloggers, they advised travelers to book directly with the airline when savings are marginal ($30 or less, by Thrifty Traveler’s definition), because tickets booked through Skyscanner may not carry the same cancellation policies. They may also not provide the level of customer service required to attend to any requests that you may have.

Other commenters also shared their own cheap flight booking tips, one of which includes using a browser’s incognito mode when buying tickets so that the individual’s location and online data is kept private. 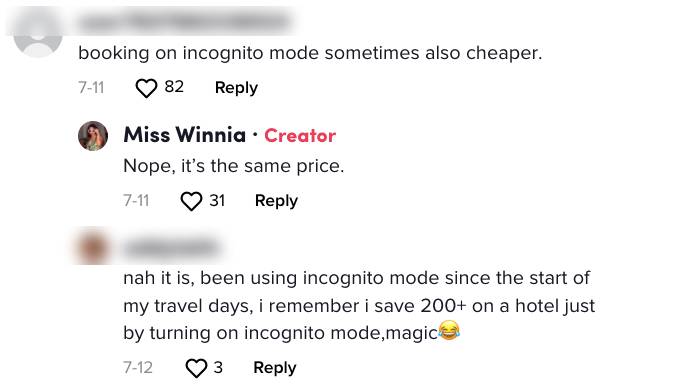 Who said being a bargain hunter is easy?