Karlis Bardelis had almost completed his human-powered circumnavigation of the world when currents drove him north to Somalia, one of the world’s most dangerous places. We talk to the Latvian adventurer about his close call, and where he goes from here.

In 2016, starting in Namibia, Karlis Bardelis, then 30 years old, rowed with a partner to Brazil. In 2018, he restarted in Brazil and cycled on a tandem bicycle to Lima, Peru, with his then-girlfriend. They pedaled the 5,400km in 102 days.

Later that same year, he rowed alone 26,000km across the Pacific, landing in Malaysia after 715 days — almost two years. He became the first person to row from South America to Asia.

After the forced COVID hiatus, Bardellis, now 37, restarted in Malaysia this past January. On June 21, he completed a 4,800km row from Malaysia to Somalia and became the first person to row from Asia to Africa. The only problem was that he was supposed to land in Tanzania, not Somalia.

This caused a great deal of stress even for the seemingly ever-cheerful Bardelis. We spoke to him about this harrowing section of his journey.

What happened? Why did you land in Somalia?

When I was in the Indian Ocean east of Madagascar, the wind started to push me northwest. I do a lot of research before I take off and studied historical wind maps. The average winds in the region at this time of year are 15 knots. But this year, it was 25 to 30 knots.

I knew about the East African coastal current which runs south to north. It starts around 80 to 90km off the coast of Africa. My plan was to get to Tanzania or to approach it as closely as possible. I still had Kenya as a safe buffer before Somalia. But because of the wind, I was already too far north when I hit the current.

Somalia is notoriously unsafe. What happened then?

Everyone knows about piracy in Somalia. But when I looked it up, I understood that since 2018, there haven’t been any known cases. There are security companies taking care of ships in the area. But this information was a little misleading because I thought it would be safer than it is.

It’s completely different when you land in Somalia. The risks just double and triple, because any tourist becomes an item to trade. Any taxi driver can sell you to the terrorist groups that control quite big territories in Somalia.

Too risky to land

Anyway, I was in quite a dangerous zone, because southern Somalia is controlled by Al Shabab. I was maybe 30km off the coast. I was in contact with the Ministry of Foreign Affairs, the State Security Service, and also the coast guard. So eventually a local boat came out to get me. I came in 1.3km from the shore during the night and I had to use [a flare to signal them].

During the day, I switched on my EPIRB to signal the coast guard and surrounding ships. It was really severe weather, the wind was over 25 knots, and the waves were quite big. I was able to step onto this local boat and they took me to shore and then an army helicopter took me to the Mogadishu base.

They then took me to a safe territory where I stayed for 10 days, while they prepared the documents I needed to legally leave Somalia. So eventually, on June 29, I flew out. 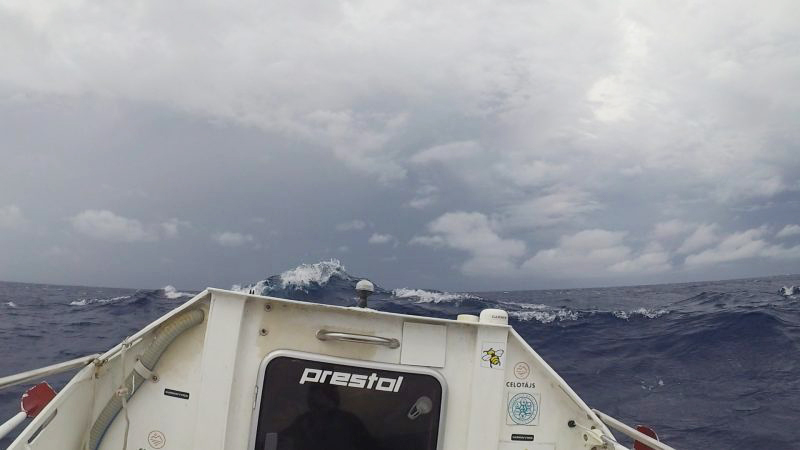 That all sounds like it must have been stressful and scary.

It really was. A couple of hours before I stepped on their boat, I got a call from the state security service in Latvia. They instructed me how to behave in this kind of situation, which was really important. I was stepping on some local boat in the middle of the night, and these two Somali guys were taking me somewhere.

The original idea was to land somewhere a few hours away by boat. But they had to change their plans, and we just waited on anchor close to the shore because we couldn’t risk landing in the wrong territory.

These guys didn’t speak much English and I couldn’t understand what was going on. You can imagine what I was thinking. All this uncertainty in this situation was so tense, it was terrifying. Together with four days of sleep deprivation, I was beyond exhausted. It really didn’t help me to calm down.

Not going back to Somalia

This section was the second-to-last part of your trip. You still have to connect the dots between Somalia and Namibia. How do you plan to do that?

I’m not sure, but I know for certain that I’m not going back to Somalia. There is no way in the world that I will go back there. When you do a human-powered circumnavigation, the main thing is to restart from your coordinates somewhere. I will backtrack and restart from another point.

To be honest, I think when I restart, I will do it very quietly, without any tracking online. Then I might show up when I’m already in Tanzania. When I left Somalia, there was an awareness of my presence, and maybe it’s not that safe.

Anyone who knows anything about Somalia has told me, “You are so lucky that you got out alive and safe.”

If you go back and restart from another point, it would mean rowing again. How are you going to get your boat back?

That’s so complicated. I have no idea, to be honest. The last information I got is that the boat is still where I finished, under the surveillance of the army. In Mogadishu, the commander of the army there told me that they can tow the boat to the big port. It is very complicated logistically right now. 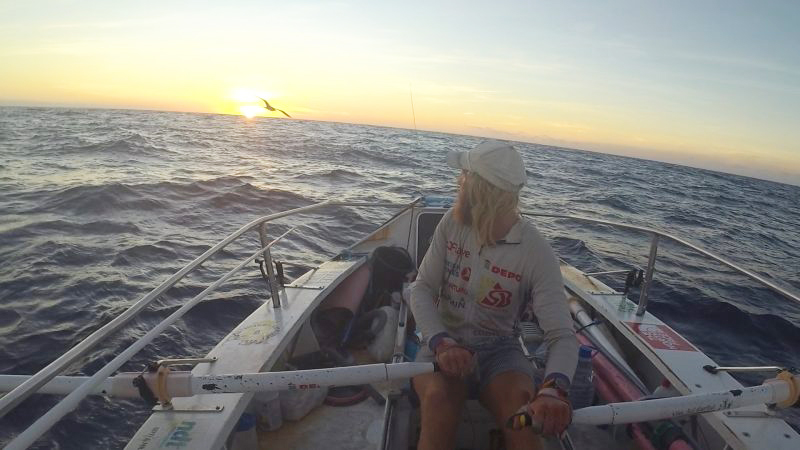 A home, not a piece of gear

Would you get another boat if you can’t get it back?

That’s a really difficult decision. When you activate an EPIRB, you have to accept that if help comes, you might need to leave the boat permanently. And that was quite a difficult and emotional decision for me. I spent around three years on this boat. This is a home for me, not just a piece of equipment.

I hope to get it back somehow because my plan was eventually to put the boat in some kind of nautical museum in Latvia. There aren’t many boats in the world that have crossed oceans the way this one has.

Parts of your journey must have been very draining. Did you ever consider not completing the trip?

It’s my life, it’s not something that I do on the side. Of course, I want to have a summer break now so I can spend time with my family, with my mother, my sister, and my sister’s family.

But this is what I do. I come back and I tell the story. Then I have my solitude when I’m on the sea and I enjoy that. Of course, I also have some solitude on land. But adventure is the place where I live truly, like when I feel that my life is happening.

The joys of a short memory

Once you’re back in Africa, will anyone join you to finish the journey or do you want to finish it solo?

I’ve had messages from loads of people I know. So many have just dropped me a message saying, “If you are going to be here with the bicycle, I will join you because I have two weeks of vacation.” So I might share the road with someone. I don’t know yet. I have some ideas. 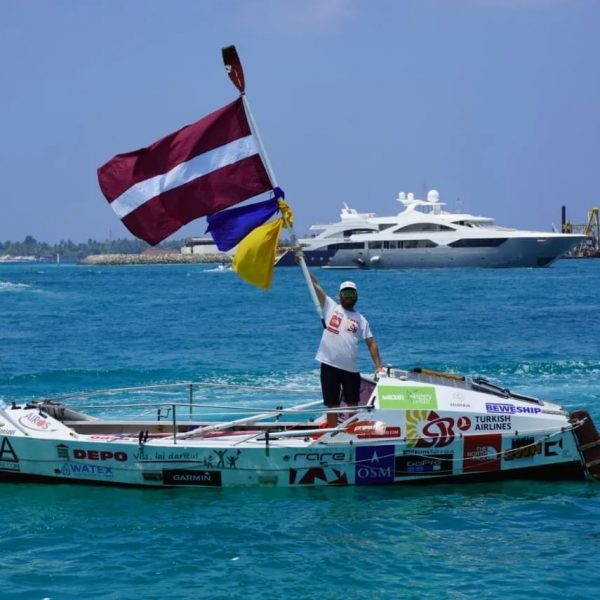 Your journey has had three big chunks of rowing. Which section has been the hardest?

It’s so difficult for me to answer that because I have a short memory. Sometimes I’m too positive in general about life and I forget about the struggles. I usually try to remember the most beautiful parts.

The Pacific was amazing, with all the islands, but there was the real technical challenge of coastal rowing in Indonesia. There were also really complicated currents and tides and a lot of traffic from local fishermen.

When I was crossing the Pacific, I was almost hit by a fishing vessel and was hit by sharks. And then on the equator, [I had] my first 360˚ capsize.

Have you preferred the rowing or biking sections?

I did a short cycle across Sri Lanka to hit my antipodal point. It only took me five days but I really liked that part because I could get fresh fruit. Part of me really enjoys being alone at sea, but I cannot choose which I prefer. For example, I’m really looking forward to seeing some wildlife in Africa. 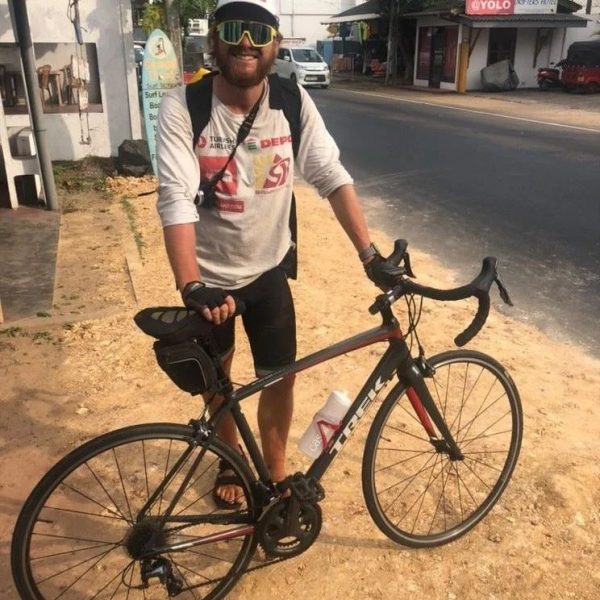 It has been an incredibly long journey. If you went back in time, would you do it again?

Definitely. But if you asked me when I finish this journey, would I do it again? No, I don’t think so. There are so many things in the world to do, so many places to go. But I don’t want to say that I’m regretting any part of this one, even Somalia. I didn’t want to end up there, but it just happened. The road, or the universe, or God took me there.

Do you see yourself doing this forever now? Once you finish, will you start planning a new adventure somewhere?

There are still quite a few ideas that I want to do, and my body is still in good shape. I’m 37, so I need to just move on to do these things. And then maybe when I’m 60, I’ll slow down. Actually, when I’m 60, I will probably be even crazier. We all have these limitations in our brains, but with each adventure, I just delete another layer of my limitations.