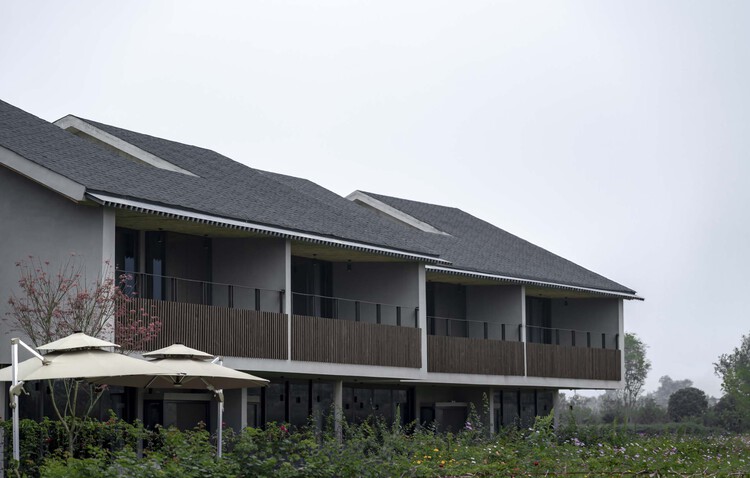 Text description provided by the architects. In Linpan of western Sichuan province, the relationship between architecture and site is never created by an architect. This special village form in western Sichuan is a state of intelligent construction, humble and positive response to the site by the people who have lived on this land for thousands of years. Although We & Arch have been involved in construction in Chengdu for more than 10 years, we have never built a bond with the Chengdu Plain. In this project, the architect tries to clarify the architecture of farmhouse forests and attempts to construct the hotel to be a small village with modern architectural features on Chengdu Plain.

Settlements and Boundaries. One hour drive to the west from Chengdu center, the city will disappear, and the Chengdu Plain is gradually unfolding before eyes, the rivers wind and fields and nurseries spread out, one by one. The architect selected a group of settlements to adapt to the twists and turns of the land boundary, in order to make full use of the confined valuable land, for the shape of the project site is polygonal and strange. A number of guest room units, reception spaces, restaurants, and tea rooms are set up, kind of random but orderly. Furthermore, these functional units are combined into similar and controllable forms to make up the boundary of the settlement, melting away the track of artificial planning.

Settlement and Spatial Order. Bamboo Yard: Passing through a square courtyard formed by bamboo forest and a 20-meter-high preserved camphor tree, is the entrance of the hotel. And the reception pavilion awaits there. The closed volume, which is formed by a rough exposed concrete frame and a rubble wall, is the largest unit in the settlement. The path, the reception pavilion, and the lotus pond make up the precision of the space. Passing through this precise geometric space, the free scattered public areas and guest rooms appear.

Water Yard: All guest units and public areas are arranged in a centripetal windmill, with balconies facing the surrounding fields and rivers, which allows each guest room to meet the best views actively. The entire courtyard was filled with a 500-plus water yard between guest rooms and the public area, with its rounding corridor system connecting the loose guest rooms and the public space. The Bamboo Yard group and the Water Yard group are dissolved together even with a wall between them, forming a clear and complete spatial relationship.

Space and formal order beneath eaves. The entire hotel’s transportation system was found along the perimeter of the courtyard once entering it, and guests will reach each function area on the first floor as they follow the waterside corridors. The guest rooms are mainly arranged on the second floor, with the corridor and staircase hidden beneath the sloping roof, which needs to pass through a small courtyard under the sloping roof to get in from the corridors. The privacy of the rooms is guaranteed as they connect to the public corridor through a “small courtyard” on the second floor. The courtyard and porch are covered by the sloping roof, and the holes in the roof of different scales correspond to the courtyard or flower pool of each room. The different heights of the hole will introduce people’s sight to the water yard or the sky as they walk in the hotel.

The temperament of reconstructed slope roof. The sloping roof in the gray space is a beamless floor system. The 200mm thick concrete slab is covered with asphalt shingle roofing material, close to the lower part of the slab with a bamboo ceiling covered. In the cornice of the sloping roof, special metal details are designed to weaken the heavy feeling of the concrete cornice which is poorly made. Three kinds of thin sheet materials render the appearance of slope roofs from original heavy and resolute to light and sharp. And Metal cornice turns scattered roof rainwater into lines, dripping into the water yard.

The sense of level and drama. To create an image that the building is close to the ground from the outside of the field, the sunken flower pond on the second-floor balcony is used to adjust the proportion of the facade and to reduce the visual center of gravity. The whole overhanging balcony on the second floor, the continuous stretch of the sloping roof, and the delicate metal cornice, all make the building more parallel to the field, showing a sense of quiet level. By one side of the water courtyard corridor, open boundless pool space is hidden. The pool looks like a cut jasper, rises from the ground, is covered by a bamboo ceiling, and spreads out into the fields. Along one side of the pool is a flower field, where nature and artificial blend and collide dramatically.

Postscript. It’s like falling in love about getting to know the site. The heartbeat will produce different feelings during each site visit for the first time. Each time the architects drive out of the city to the project site, through dozens of journeys, they gradually adjust the building and landscape. Nevertheless, the architecture has some surprising changes compared to the original sketch for various reasons, but for the most inspiring and precious parts, we insist on and kept. Hoping this hotel will not be so noisy, and the architecture will not be so controversial that it could coexist with the earth quietly. As seasons change and plants grow, people who read the building will also be changed by time. Leaving the imperfections to time, the building and the site will eventually acquire a peaceful beauty of time.