Our column “The Best Room At” offers a glimpse inside some of the most charming, luxurious, and iconic properties around the world.

When Stacey Soloviev took over the Chequit Hotel on New York’s Shelter Island in 2020, she thought renovating it would be a straightforward job. “A new roof, a paint job, furniture, and then we would start welcoming guests,” she told T&C recently. Her ex-husband, Stefan Soloviev, had purchased the 150-year-old property in an auction and asked her to oversee it. (Stacey runs Peconic Bay Vineyards and Santa’s Christmas Tree Farm on the North Fork, which Stefan also owns.) “I figured we could tackle bigger stuff down the road.”

An early clue that she would have to amend her plans came after the general manager she hired, Ben Levine, had moved into the hotel and started calling her late at night. Levine, a veteran of some of hospitality’s liveliest institutions—the Delano in Miami Beach, the Surf Lodge in Montauk—was no stranger to challenge, but she could hear stress in his voice. “It’s raining inside and water is cascading down the stairs,” he said during one call. “The lights are flickering, and I think this place is haunted,” I mentioned in another. 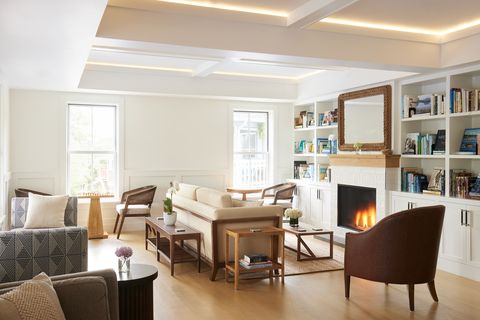 A living area at the restored Chequit has shelves stocked by a local bookstore.

“I informed Ben that his three-year contract did not have an escape clause for ghosts and that he’d have to stay on.” Eventually, after an exterior wall almost opened up during a storm, Soloviev decided to embark on a top-to-bottom renovation that included shoring up and adding to the foundation, replacing all the windows, and completely redoing the wiring. Along the way, many unexpected discoveries were made. “We didn’t know that the building didn’t have subfloors until I spilled a glass of water and it immediately leaked through to the room below,” said Levine. Soloviev added new floors to the list.

Earlier this summer, the hotel finally reopened. To anyone who has stayed at, or even walked by, the Chequit, everything will look familiar. Upon closer inspection, though, they will find that it is now in pristine condition inside and out and is loaded with modern amenities. We asked Soloviev to tell us a little bit about what it’s like to stay at the hotel.

What do you consider to be the best room at the property and why?

My favorite room is number 25, which is where I stay when I get to spend a night. It’s a beautiful suite with a sitting area, a large bathroom with a tub, and a really cozy sleeping area. I love that it also has its own private balcony.

How much does it cost per night?

How would you describe the guests and the vibe at the hotel?

We are seeing a lot of familiar faces from around the area, plus people who are experiencing Shelter Island for the first time. Visitors from the North Fork and South Fork are eating sushi at our restaurant, Weakfish, or sitting down in the Tavern and enjoying the raw bar. Everyone is surrounded by friends and family and doesn’t want to leave. 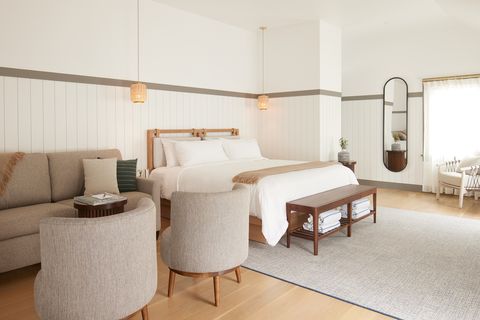 Each room in the 150-year-old hotel had to be rebuilt from the subfloor up.

What feeling about Shelter Island do you hope to impart to guests?

We want the hotel to be open to both our neighbors on the island and of course hotel guests. It’s so important that when people come to Shelter Island, they see how special the community and the way of life is here. The goal of the restoration was to have a place where guests can really slow down and take a step back in time but still have the comforts of the present.

What is one thing about the hotel that you think first time visitors will find surprising?

I think they’ll be surprised to see how many nice little nooks and crannies there are in the hotel, from our library curated by Black Cat Books to the beautiful sushi bar and restaurant executed by Noah Schwartz and designed by Glen & Co. to the expansive outdoor dining area of ​​our new restaurant, the Tavern. There are great trees to sit under while reading a book and some special art hidden throughout the hotel. 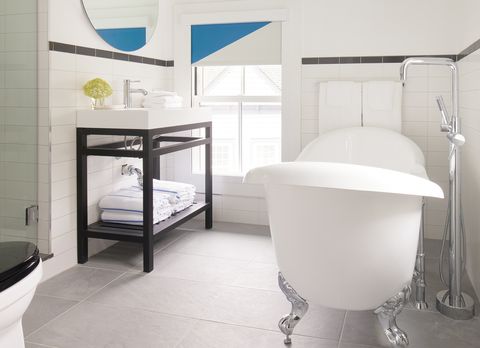 The hotel’s original claw foot tubs were replaced with new ones and showers were added.

Did your neighbors have any requests?

One of the best parts of the whole process was hearing all the stories from people who had grown up coming to the hotel for meals and drinks. During an earlier renovation, previous owners had moved the bar in what is now the Tavern to the back wall. Everybody asked that we make it a horseshoe shape again and move it to the middle of the space and that’s what we did. There was also a dying tree on the outdoor dining patio that everyone loved but we had to cut down for safety reasons. I found a similar full-grown tree at the winery and had it transplanted and the neighbors seem happy about that.

What’s a local attraction that you always recommend to guests?

We always recommend borrowing a bike and getting lost on the island. Guests can explore some of its special beaches and the Mashomack Nature Preserve. They can even take a quick ferry ride to our vineyard, Peconic Bay Vineyardson the North Fork for a wine tasting and Moke tour of the vines.

Norman Vanamee is the articles director of Town & Country.