Whenever you think of vacation time, you think of resting in your own special way. So, that’s either lying on the beach, getting the occasional sunburn, or going hiking. Or actually going anywhere other than the location you’re staying at because resorts are boring. Maybe.

But, apparently, a vacation doesn’t necessarily mean it’s time to relax. Take this one family, for instance. The extended group of 8 invited a daughter’s friend, seemingly all-expenses-paid, to vacation with them. What they failed to mention was their expectation that the daughter and her friend would cook for the entire group for the entire vacation. Entirely.

Oh, it gets better. Or worse. Depending on how you look at it.

Whenever you think vacationyou probably think relaxation, right? Well, no, as this one family needs someone to be cooking all the time

Redditor u/imonvacaaation, who introduced herself as a female student, has a roommate, Meg, whose entire family—ie the friend, her mother, her father, two of her father’s friends, and her three brothers—invited her to vacation with them .

The family offered to buy her ticket and book a resort for all of them to stay at. Sounds sweet, right? The young woman, in turn, started saving up for some activities while on vacation, and a little bit extra to treat the family to some dinner for being so generous.

But, there had to be a catch, right? There was. A pretty sneaky one, surprisingly. 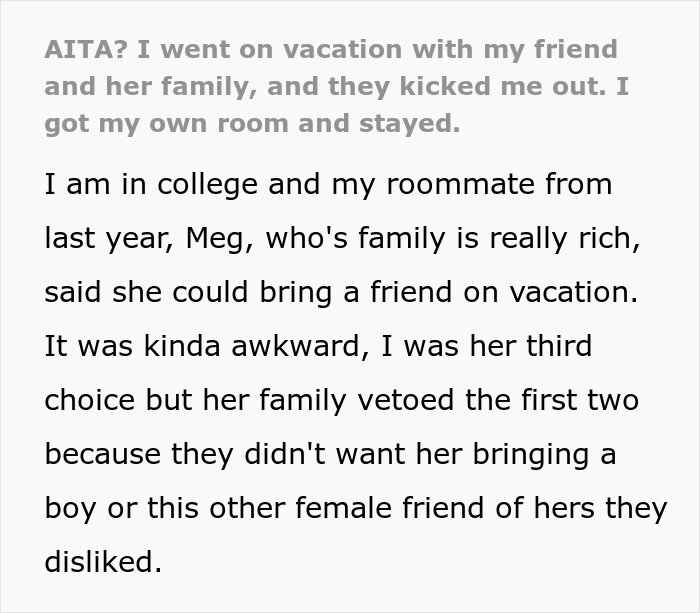 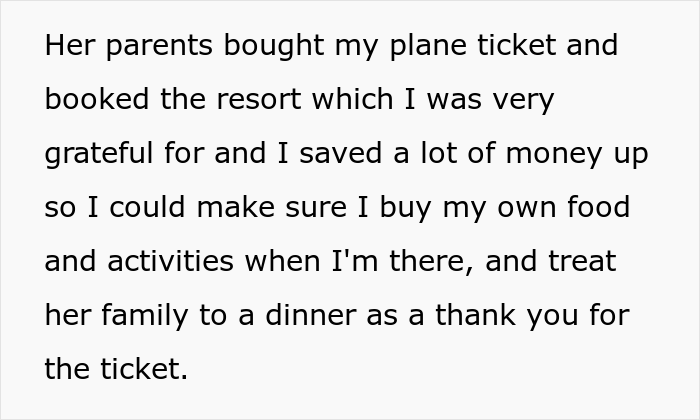 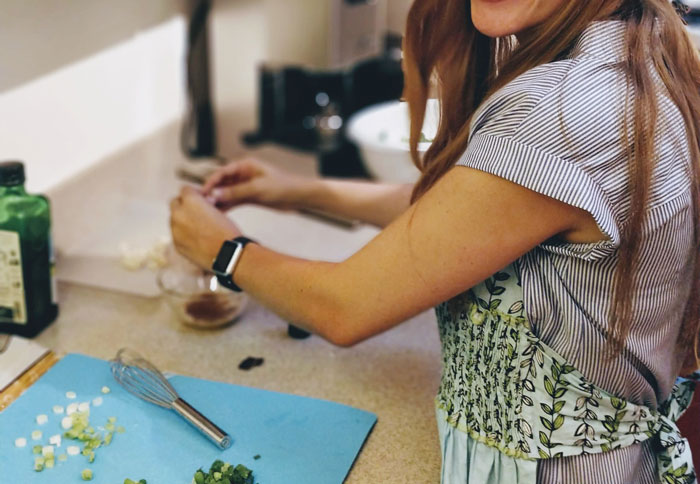 First off, everyone flew first class. Except for the friend. The friend got economy. But why complain, it’s free, right?

You see, Meg’s family is one of those “traditional” ones that believe that a woman’s place is in the kitchen and, unfortunately, Meg and the OP fit that description. The OP admitted to not being a very good cook and only knew a handful of recipes, so she tried her best.

At first, it seemed like they would all have a really good time, but the economy ticket and grocery shopping soon proved otherwise 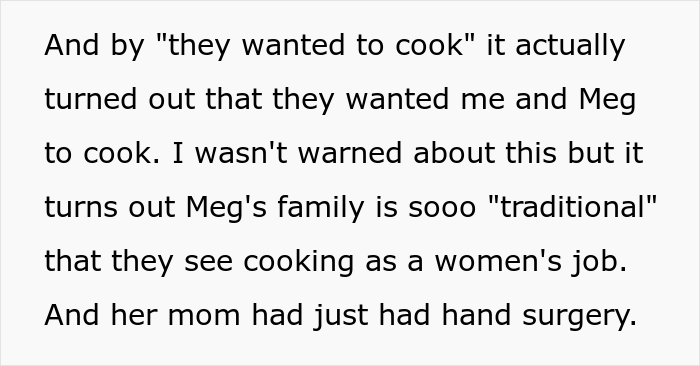 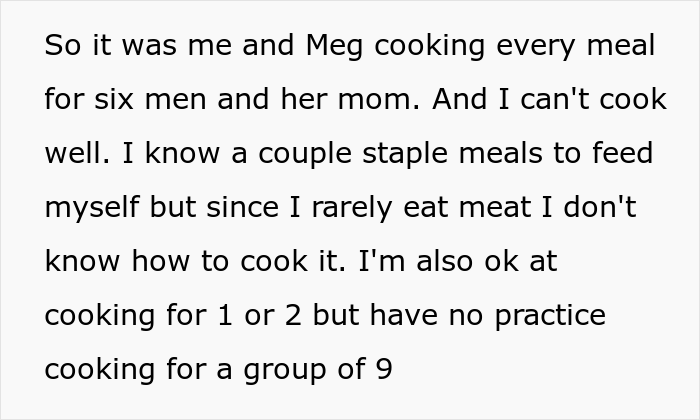 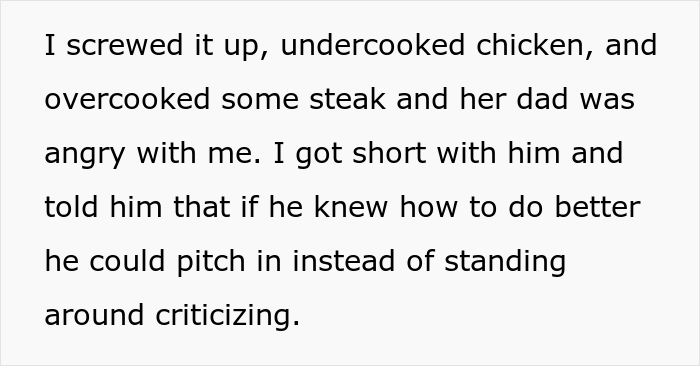 However, it did not go well. The father of the family in turn got livid, and tensions started to skyrocket. But OP was not about to let anyone trample on her, so she told him off. This initiated his entitlement protocol and he blurted out that it was his vacation. Well, it’s OP’s vacation too, or did they invite her to be an unpaid cook?

Some back-and-forth later, the dad snaps and effectively tells OP to pack her stuff and go. No idea how, but she did. First things first though, she figured out that her return ticket was not protected in any way, so she sorted out a password so the family wouldn’t cancel it without her noticing.

But, after just one attempt, some family members snapped at the OP and asked her to leave… but they didn’t specify how or when 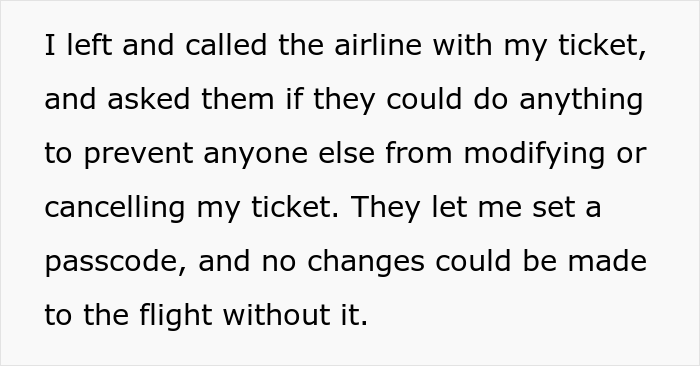 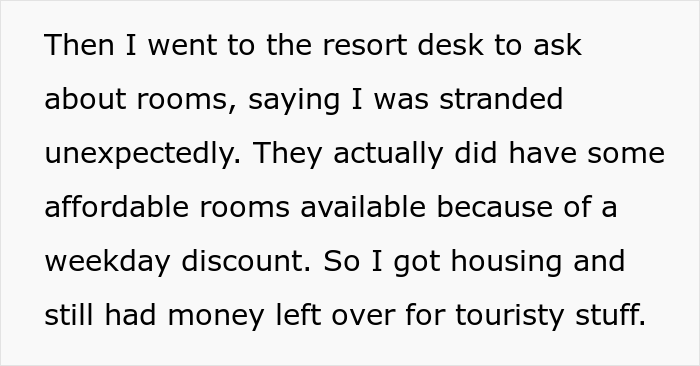 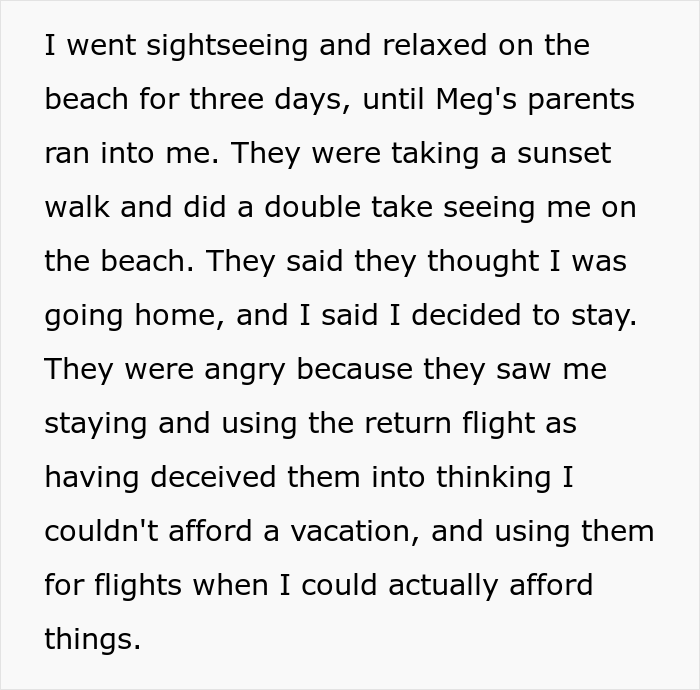 What ended up happening is the OP secured her return ticket that the family bought and booked another room, which upset the family a lot 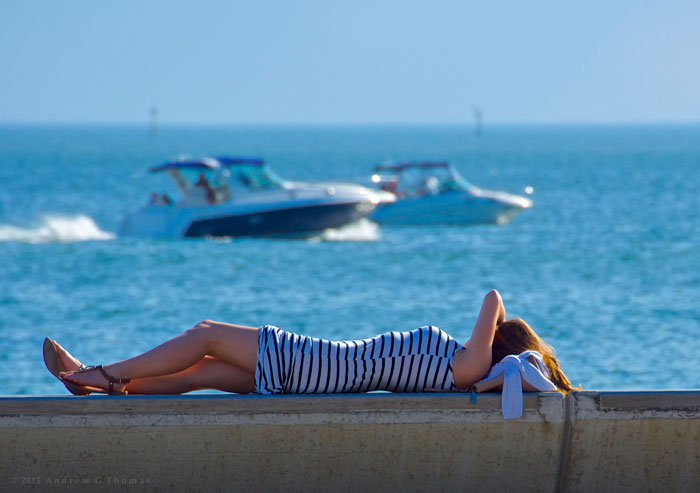 Then she went to the resort’s front desk and sorted out a surprisingly affordable room, explaining her predicament. They hooked her up, and she still had some money left to do touristy stuff. On her own terms. The only sad part of it all is that this left her roommate stranded with all of the kitchen stuff.

One day, the OP was sightseeing and Meg’s family happened to stumble upon her. They seemed quite surprised that the OP was still around. In fact, they were furious after realizing that the OP would be using their return ticket, having “deceived” them into thinking she couldn’t afford a vacation. Which, when you think about it, is quite evil as they were effectively attempting to leave her stranded here.

And folks were all in support of OP—she wasn’t wrong to do what she did, and got some pretty satisfying revenge (with a dash of malicious compliance) along the way.

But the internet thinks the OP was right here—not only was she in the clear, but she also got some satisfying revenge along the way

But, all in all, folks agreed that she was invited to vacation with them. Hence, she was in no way obliged to feel bad about doing just that. And hence people’s praises for the OP, saying she did the right thing and executed it flawlessly.

Her post got nearly 27,000 upvotes and a bit over 20 Reddit awards for her efforts. You can check out the post, all of OP’s responses in the comments, as well as those of the commenters here. And you can check out our other Am I The A-Hole articles here.

Boot, eh-eh-ehnot so fast, as we’d like to ask you to pay the commenter’s tax, which is to leave your personal convictions in the form of text regarding the current personal narration from the world wide web in the comment section located in the lower cardinal direction of this virtual page.