* Editor’s Note: The “Views from NAU” blog series highlights the thoughts of different people affiliated with NAU, including faculty members sharing opinions or research in their areas of expertise. The views expressed reflect the authors’ own personal perspectives.

Oriel Humes is a fifth-year Ph.D. student and graduate research assistant in DAPS. She studies the spectroscopy of Jupiter’s Trojan asteroids and small Solar System bodies with adviser Cristina Thomas. The NAU Review asked her to share a recent unique research experience—collecting data on space from SOFIA, a flying research facility. Follow her on Twitter @OrielHumes..

It’s 6 pm on a scorching day in late May, and most people in Los Angeles are stuck somewhere among the city’s traffic-choked highways on their way home after a long day at work. As the sun sinks towards the horizon, my day is just getting started.

As an observational astronomer and Ph.D. candidate in Northern Arizona University’s Department of Astronomy and Planetary Science, it’s not unusual for my work day to start in the evening, nor is it unusual for my work to take me far from home. Though, on this night I won’t be observing from a distant mountaintop. I’ll be observing from the cabin of a Boeing 747 high in the stratosphere over the American Southwest. The telescope I’m using—the Stratospheric Observatory For Infrared Astronomy, or SOFIA for short—is mounted in the back of a jet airliner with a hole cut in its side to let starlight in.

SOFIA’s unusual airborne platform gives it a number of unique observing capabilities. A telescope mounted in a plane is mobile, so SOFIA can tailor its flight path to the needs of the observer. At 40,000 feet in the air, the telescope is above the clouds and most of the

infrared-absorbing gases (mainly water vapor and carbon dioxide) in the lower atmosphere that make ground-based observations in these wavelengths difficult. It’s because of this capability that I chose to use SOFIA in the first place. I’m studying asteroids in the 10- and 20- micron region of the infrared, regions of the wavelength spectrum that are inaccessible to most ground-based telescopes. I applied for and received time on SOFIA in 2019, at the end of my first year in graduate school, but my chance to fly with SOFIA came three years later in 2022.

SOFIA, like so many other airplanes, was grounded by the COVID-19 pandemic. 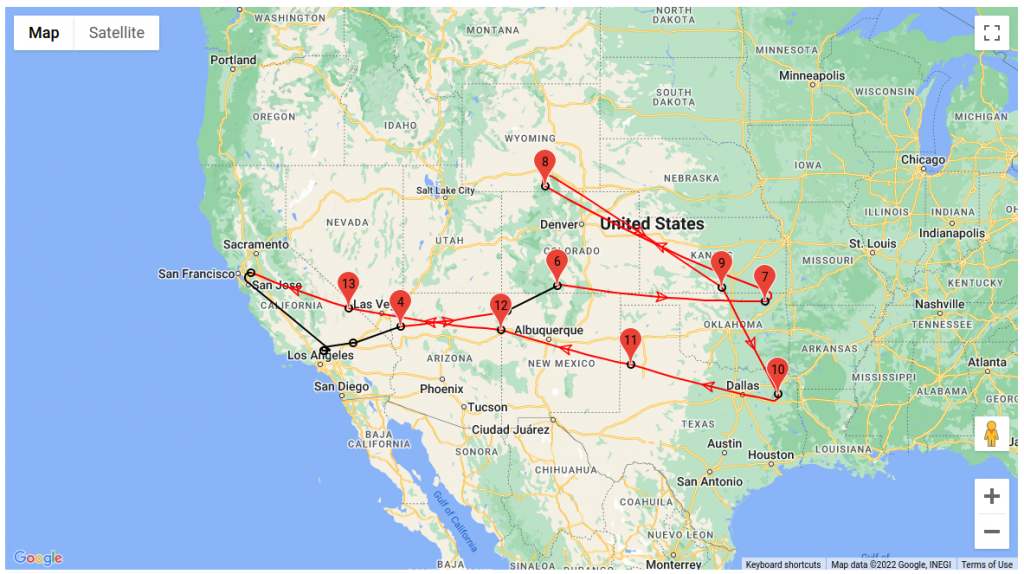 We prepare for takeoff by attending a short briefing at Armstrong Flight Research Center. Operating a unique facility like SOFIA requires a lot of support: ground crews and engineers, telescope operators and instrument scientists, pilots and the mission directors who coordinates between each of these teams There are many guests, including a dozen educators from the US and Germany as part of the Airborne Astronomy Ambassadors program, which invites K-12 educators to fly alongside the SOFIA crew and bring their experiences. back to the classroom. My role as a guest observer is a little different: on this flight we will be observing one of my target asteroids, and I will spend most of the night with the science team, who will consult me ​​if any issues arise while we are observing my targets.

On the plane, we don headsets that will protect our hearing from the noisy cabin environment and allow us to talk amongst ourselves. The nose of the plane has a few rows of first-class style seats, a couple of standard airplane bathrooms and a spiral That’s where the similarities to a commercial plane end, though. The back of the plane is set up with several computer console stations, fortified for the stresses of takeoff and landing, for the different teams and Behind the telescope’s instruments, a bulkhead separates us from the telescope and the aperture it looks out of. Compared to a commercial flight, there’s a lot of room: more like an office with an open-floor plan. than a jam-packed transcontinental flight.

Each flight is about nine hours long, but there is plenty to do. The first hour is dedicated to setting up and calibrating the telescope, after which we can begin collecting scientific data. Each leg of the flight has a different science target, and the plane flies in mostly straight lines while on target, executing banking turns to re-orient between observations. Our flight path takes us east for the first half of the night; somewhere over the southeast, we turn back and head west to land back at Armstrong The leg of the flight with my observations is toward the end of the night, so I’m happy to oblige when the educators ask me to explain my research and pepper me with insightful questions. I return to the science consoles at the back of The plane when we observe my target, the asteroid Ino. This section of observations goes without a hitch, despite the potential for heavy turbulence as we fly over a cluster of thunderstorms in Texas. 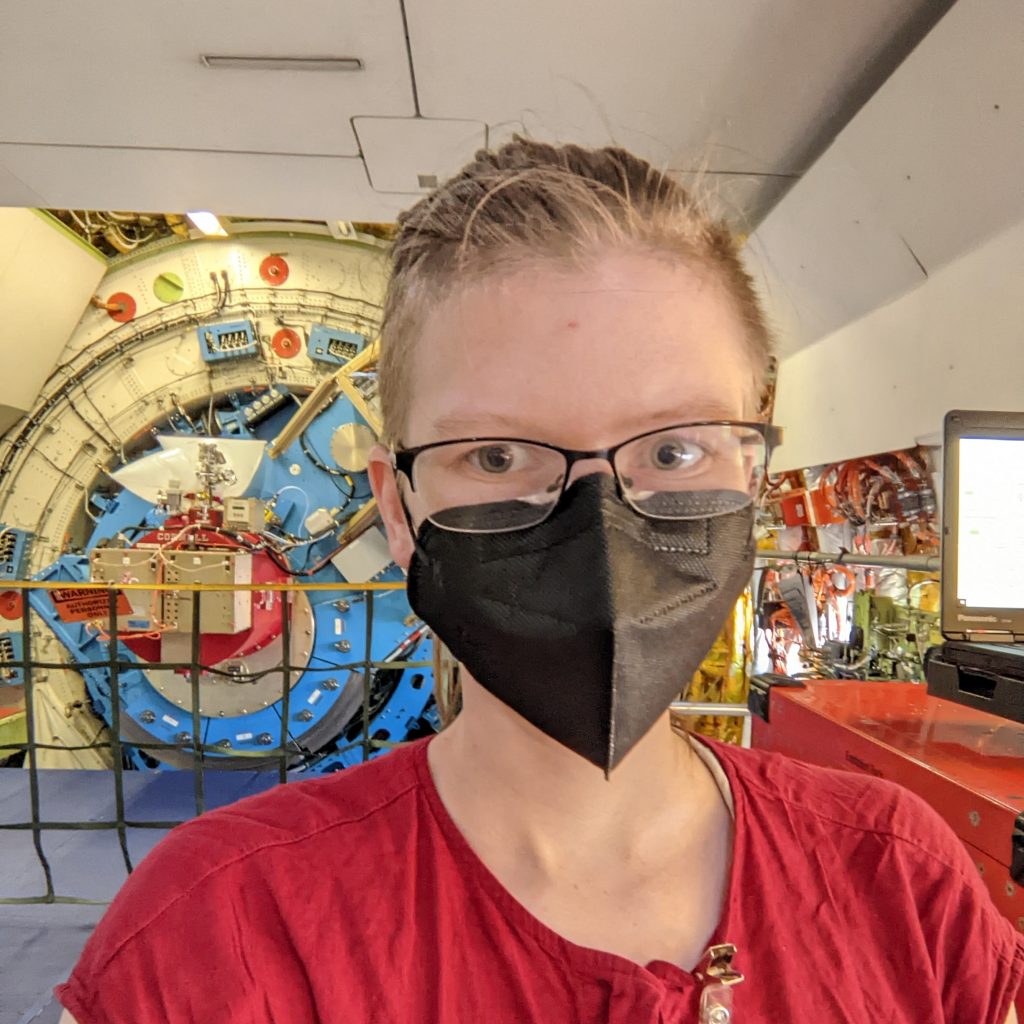 At the end of the night on my second flight, to fend off sleepiness, I ask the mission directors if I can visit the cockpit and chat with the pilots. On our way back, I’m in for a treat: we are flying over Flagstaff, and I want to see the city’s trademark sodium lights from the air and wave at my colleagues. The pilots are happy for the company, and when we fly over Flagstaff, they turn out the lights in the cockpit and I get to snap a few pictures on my phone.

As we taxi back toward Armstrong, the mood is bittersweet. I’m grateful for the opportunity to have flown with SOFIA, but I’m also keenly aware that this is one of the last flights it will ever take; just a few weeks ago Of course, this isn’t the end for mid-infrared astronomy, as the recently launched James Webb Space Telescope will observe asteroids in these wavelengths, too. But I can’t help but feel a sense of disappointment at the loss of a facility that has shaped so much of my graduate career. Like my path to getting a Ph.D., the journey that led me to flying both trajectories had their challenges and successes, though ultimately, it’s been a ride I’m thankful to have had the chance to go on.