In the winter of 2020, just before the world shut down, I took a trip with my father to San Sebastian, the town in Puerto Rico his family is originally from, a place I had never been before. I knew that this trip was going to be a difficult one. My father and I had a strained relationship at best—probably because my father and sobriety had a non-existent relationship at this point—but some part of me wanted to see this place with him, to step back in time a little bit. I also, cynically perhaps, knew that it would be good for my novel. What could be better research for my novel about a woman trying to find her estranged alcoholic Puerto Rican father than taking a trip with my own alcoholic Puerto Rican father? Sometimes life imitates art, not the other way around.

Puerto Rico is a long oblong shape. Most people only visit an area called El Condado, a little spot fifteen minutes from the airport with a row of major hotel chains and private beaches. That’s if they spend the night on the island at all; most people I’ve ever met who tell me they’ve been to Puerto Rico passed through on cruise ships. If you are a more seasoned traveler, you might have gone to one of the smaller islands, Vieques or Culebra, approaching via ferry from Fajardo or arriving by private plane. Surfers know Rincon, and every once in awhile someone tells me they’ve been to Ponce. But among non-Puerto Ricans, that’s about it.

We took the highway in our rental car towards Rincon, passing through Bayamon on our way out. Immediately after you leave Old San Juan, the picture-perfect little city with impossibly beautifully streets with brightly colored buildings, lazy snoozing cats, and blue cobblestones, river rocks from Spain that served as ballast for conquistadors, you realize that a lot of the island is a flat suburban hell:flat square single-story houses made of poured cement, and endless strip malls and chain restaurants, including, amusingly enough, Taco Bell, all nestled between wild and glorious greenery, the tropical landscape always eager to take back the island from human invasion.

Daily scattered rainfall means the air is always moist and everything grows like mad. Plants spring up from the many cracks in the ill maintained roads within hours. Iguanas dart here and there, sometimes becoming roadkill during their mating season, when they are the most active and the least cautious. But February isn’t that time, and so my father and I didn’t see limp green bodies, just highway and, as we moved towards Barcelona, ​​the mountain range of the island’s middle. 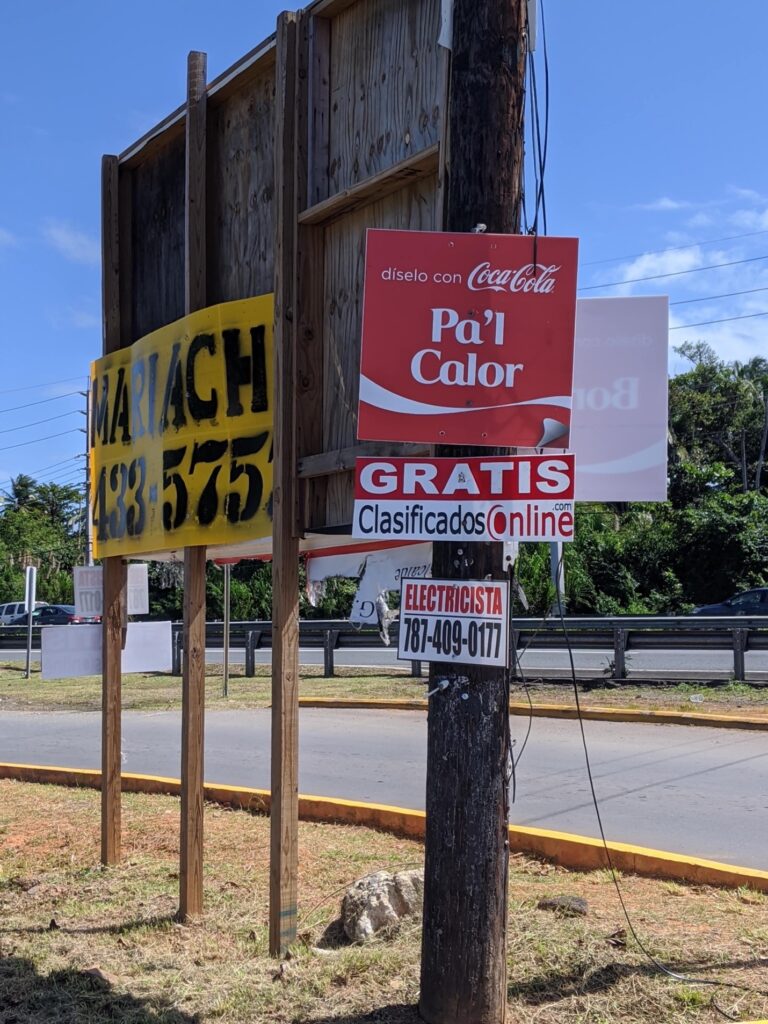 The weirdest thing about driving through the island was how normal it felt to me. I’ve been coming here all my life, after all, sleeping in my grandfather’s cramped little house in Bayamon, observing the odd mix of beautifully preserved historic buildings and the brash brassy dented nature of Puerto Rican poverty. The island has few jobs, few industries, and a sense of defeat. It is politically corrupt, becoming more dangerous, and full of inertia, of brightly painted cement and a clear turquoise sea and hopelessness. Outside of the major tourist spots, the spring break parties and Spanish forts, it’s like suburban America, but make it Latin. 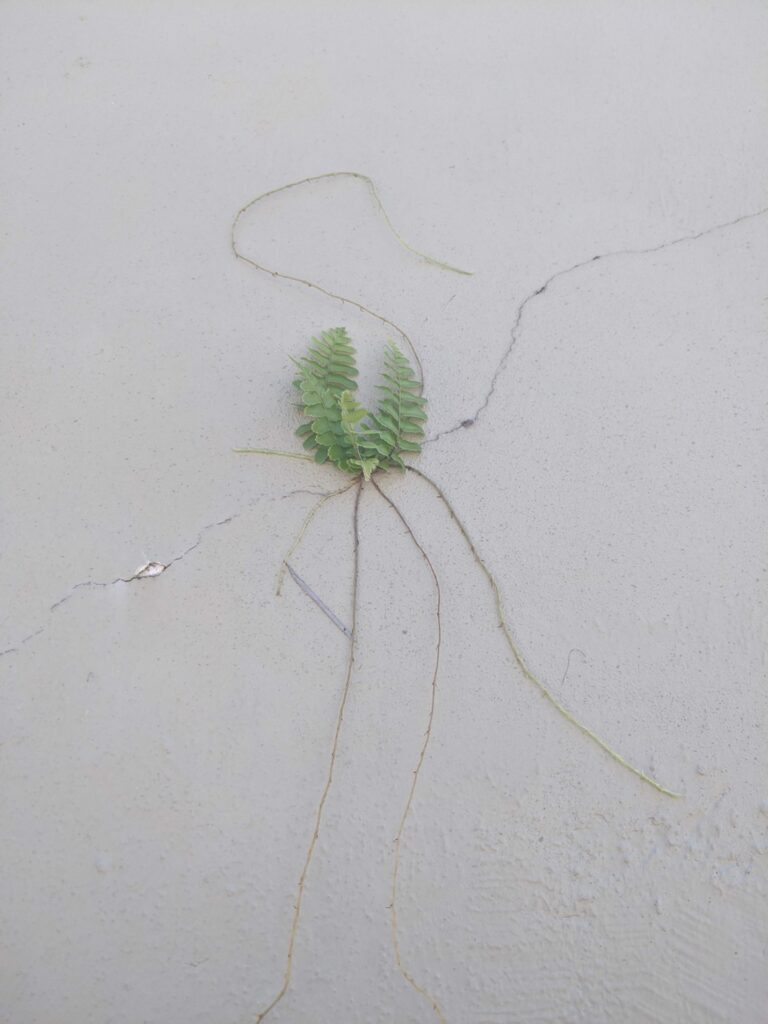 We turn towards the interior at Arrecibo and start climbing the mountains in our little car. My father will not let me drive, of course. He was a taxi driver in New York and later in San Francisco in his summer breaks back in the 1970s and as such considers himself a professional. I’m 32 when we take this trip, I’ve driven for 16 years, and he still pumps an imaginary break on the passenger’s side if I drive. Unless he’s very drunk I don’t bother to fight it. He has, to my knowledge, never been in a serious car accident. Miracles are real.

We keep going, up and up until we reach San Sebastian, a pretty little town founded in the 1700s. In my research, I learned that Saint Sebastian, who survived the plague and a hail of arrows, is the patron saint of archers. This feels bizarre to me, but what can I say—I’m Jewish, we don’t have those. We stay in a hotel outside of the city, dropping our things off and going into town. 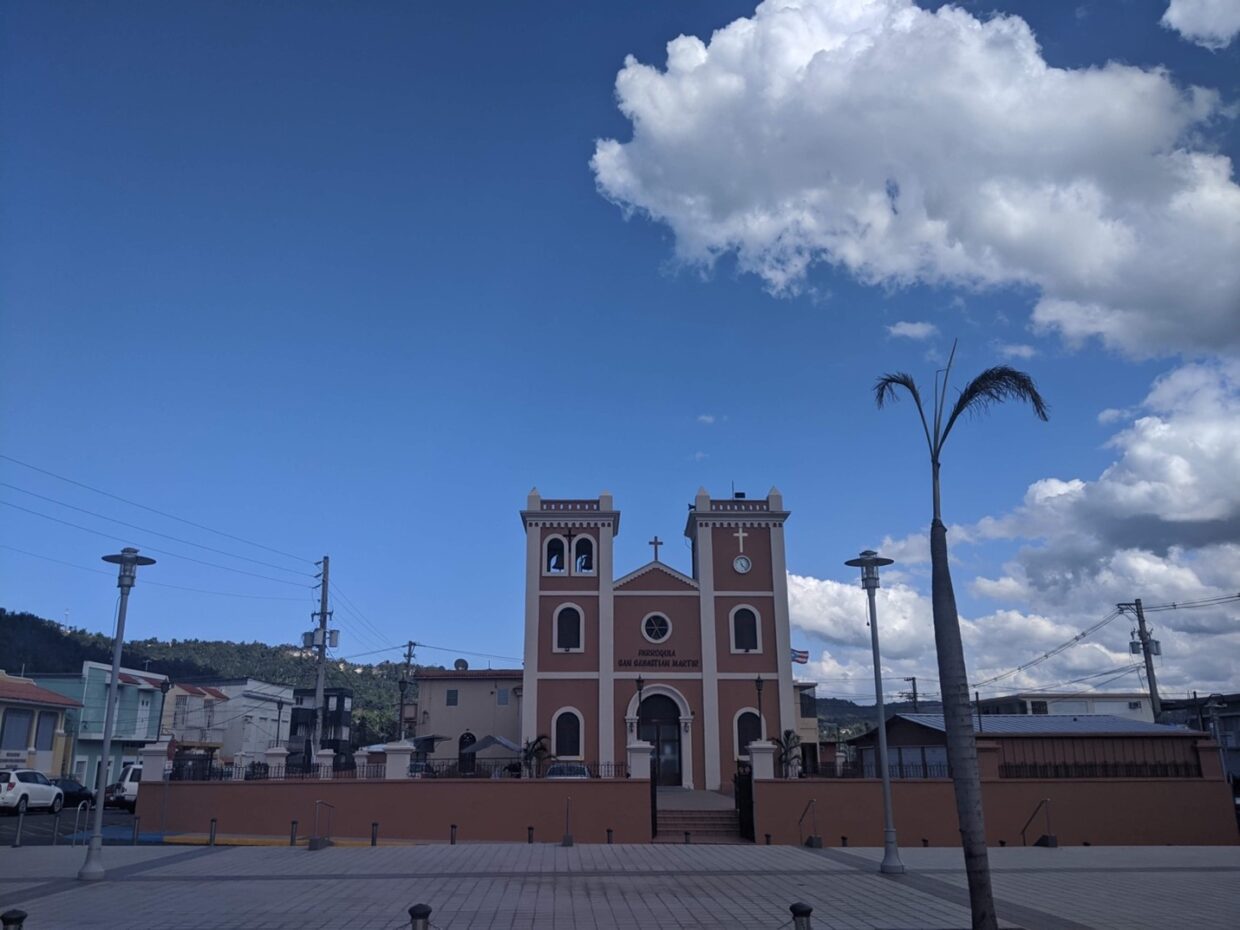 My mother always described San Sebastian as almost Appalachian, and not in a good way, with people leaving their old refrigerators out in their yards. A Puerto Rican hicktown. But now it’s just like a lot of the island, mostly empty. It’s been shaken, literally, by a recent earthquake on this side of the island just a few days before our trip, so there is absolutely no one around. We look inside the public archives, detailing the history of the town, but everything else—the church, the other museums—is closed. 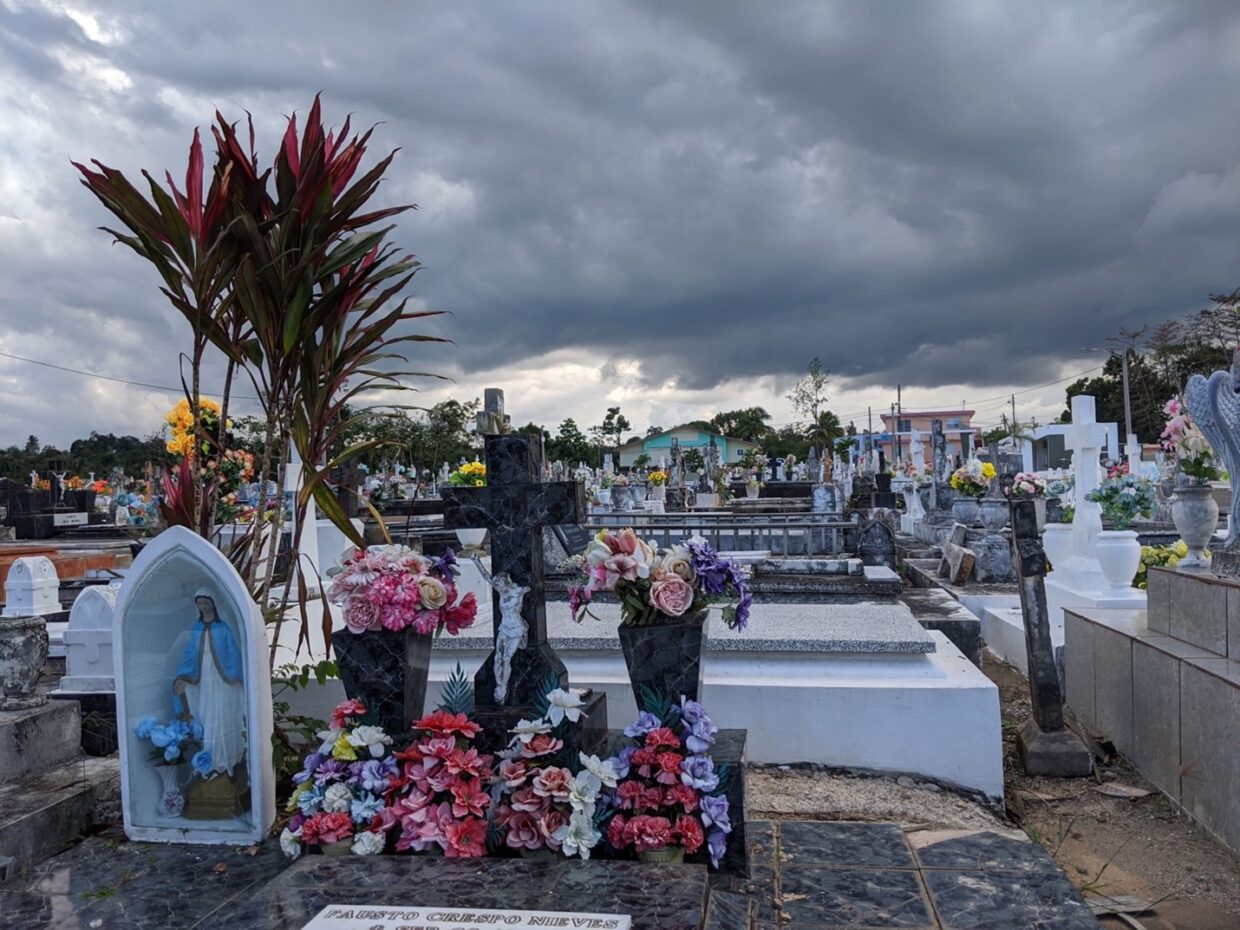 The town has two cemeteries, one older and closed, and one newer for fresh deaths. We see both. The historic one has a sign that it was the resting place for cholera victims, and I think, of course, of Marquez. I remember the first Marquez book I read, Chronicle of a Death Foretold. It reminded me of Puerto Rico a little, the way things feel more surreal, more strange and magical when they are baked in the Caribbean sun.

We visit the other cemetery, but we can’t find my grandmother’s grave. She died in New York but was buried here. Instead, we just wander, looking at lizards jumping over graves, at fading fake flowers in offering, at all these gifts and tributes to the dead. We see the graves of war veterans, but my grandfather, who fought in Korea, wanted to be put in the official veteran’s cemetery, so he’s not here.

Over dinner, I tell him about a book that came out that winter, a controversial novel whose writer had been accused of cultural appropriation when writing about a Latin American culture. My father doesn’t understand what appropriation means in the context; he assumes the author has been pretending to be Latina. I explain the difference, and he finds all of this rather foolish, this issue of appropriation. It’s nice to be appreciatedhe comments. It’s nice people are interested. When he was a kid, he used to straighten his curly hair with lye to make himself look whiter. I think he thinks it’s nice that it’s going the other way now, that people want to be like him. Like us. 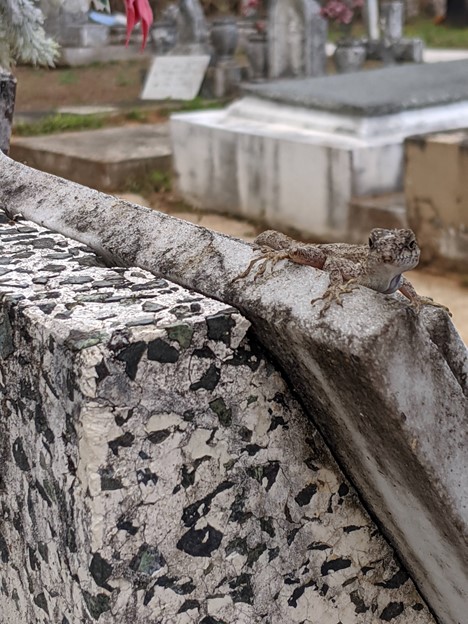 We go on from there, to Cabo Rojo. My father’s choice. It’s a beachy town on the East side of the island. I ask him why, hoping it has something to do with his family, his past, but he’s never been, and says he heard it was nice. It is nice, I suppose, although I watch him make his way through pack after pack of Heinekens and Marlboro Reds and listen to him snore at night.

We head back along the coast and stop by Isabella. The flooding there from Maria was ten, eleven feet high, and it feels like a ghost town. Two hours or so from San Juan and it’s another world, and it was cut off from resources, medical supplies, electricity for weeks, months. It hasn’t recovered, and who knows if it will. A small shack like bar is open for us, and my father and sit, watching the water lap at the crescent shaped beach. On the road I see a Bacalaito seller, and we stop for one. I love the fried greasy things, impossibly salty, impossibly large. Little restaurant versions are a joke; I want one the size of my head, rich with salt cod and dripping with oil.

We’re in the car, my father driving as he always does, when he suddenly becomes unconscious. He does this sometimes. I don’t know why, and neither does he, and it’s terrifying to me, and to my mother, and whenever he comes to, he swats at the air like a cat and says it’s nothing. He’d done it over dinner in Cabo Rojo, his head hitting the table as he went down, popping out the lens of one of his glasses. He came to and popped it back in place as I paid the check. But now he’s driving, because he won’t let me drive, because he’s the professional, because he has to be in control, because he’s my father and he still sees me as a child. And he’s suddenly unconscious, in the middle of the highway, with me in the death seat.

I throw my hand on the steering wheel and guide us quickly over to the side of the road, driving the car into the soft grass as drivers honk and my heart stops in my chest, I’m so so. I throw the hazards on and somehow my father regains consciousness, asking me where we are. I get him to brake, and I take the keys of out the ignition. He looks at me, lost and a little scared. What happened? He asks me. I have nothing to say in response. Increasingly I don’t understand him, the decisions he makes. I can’t get inside of his head, not by going to his parent’s hometown, not by talking to him about contemporary literature, not by writing him into my novels. His mind, an increasing strange place to be, isn’t a place I can spend any time. He will always be a mystery to me in some ways.

I drive us back home to San Juan. It was just like driving anywhere else in the world. And I was good at it.

That night, as my father slept, having doused any anxieties he might have had about his strange new collapsing hobby with a nice amount of Don Q gold, a local rum, I went to El Batey, a local bar that is open from 11 am to 6 am daily. Hunter S. Thompson drank there, although honestly, it would be easier to find a place he didn’t drinks, really. I sip my own rum and look at myself in the clouded mirror. I do love rum. I love greasy fried food and hoop earrings and the sound of Spanish and salsa dancing, and the smell of the sea and I love Puerto Rico. And I love my father, in the way you love the worst and hardest parts of yourself. 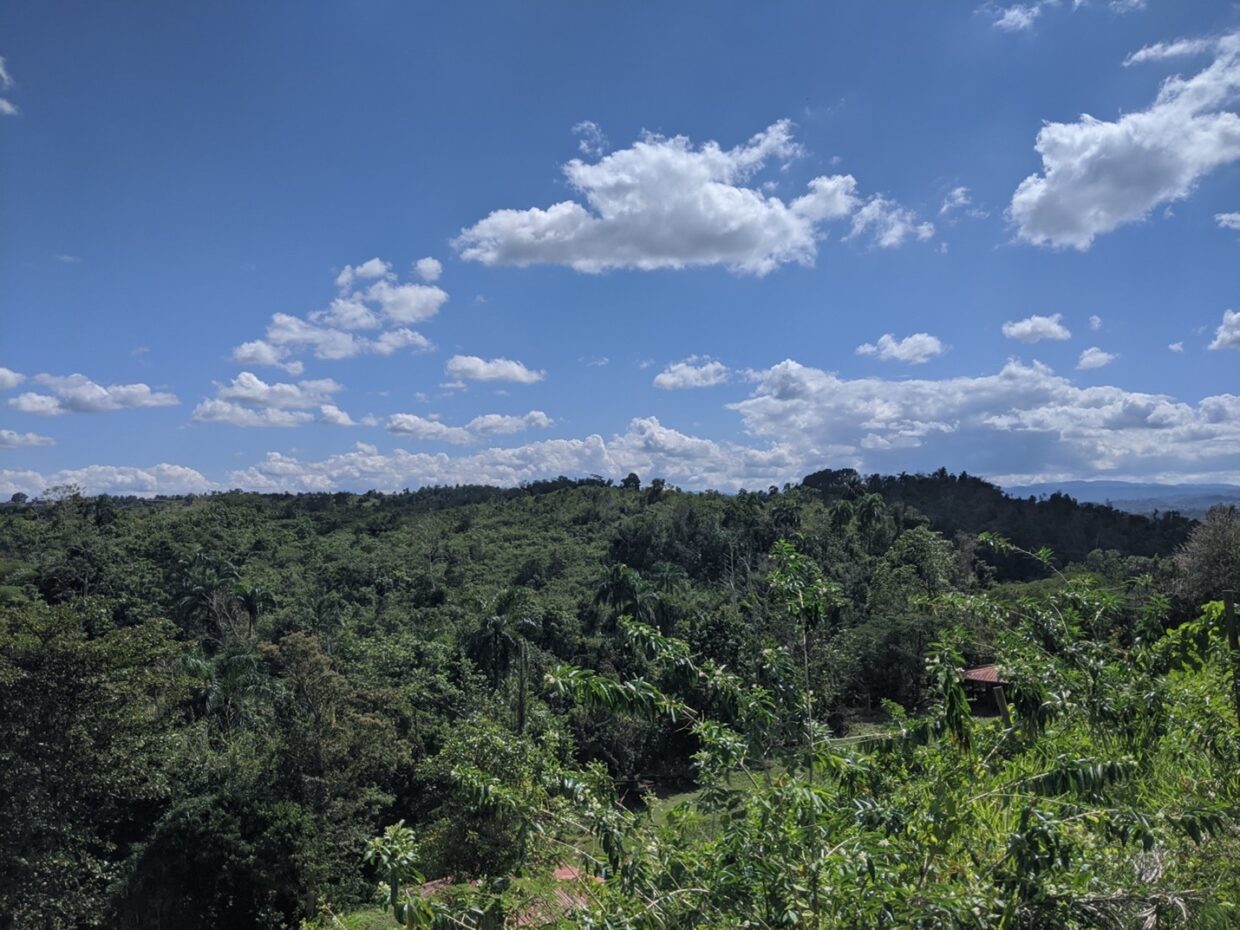 I had hoped I would connect to something on this trip, to feel something. I had hoped I would find some piece of myself in the place my family is from. But San Sebastian just a small town in Puerto Rico, a place like any other, and I was fanciful to think some magic would happen here, some light would shine in my father’s eye, and he would be some other version of himself, unlock some doors. But my father didn’t become something else as we drove, and walked, and looked around the graves of strangers. He just him, sitting on a grave and having a cigarette as I walk alone in a cemetery trying to make meaning. I was looking for meaning in his past on this trip, but in the end, the only thing that matters is what this meant to me. I didn’t find long lost relatives or unspoken truths. But I saw more of a place I love, I swam in the warm and wonderful ocean, and I drove, for the first time, on split and pitted highways to get us to our home. I can pick and choose what I want of this inheritance; I made this place a little more mine, not just his. And that was well worth doing. 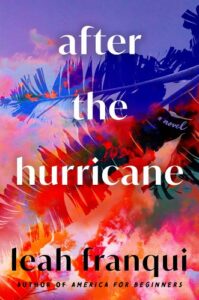 Leah Franqui’s After the Hurricane is available now from William Morrow.