Summer of 2022 is a special one, not only because most of the COVID-19 restrictions have been lifted, but also because of the number of new routes launched by LOT. Apart from Baku and Cairo, the Polish carrier has inaugurated connection to Sarajevo and Pristina. This means that Warsaw is now connected with all capitals of the former Yugoslav republics. It is time to explore the southern part of Yugoslavia.

When I hear Sarajevo, I still have in the back of my mind the voice of Zdravko olić, who dubbed wolf Vučko in his famous phrase “Sarajevoooo” – featured in a short opening cartoon broadcast before each transmission from 1984 Winter Olympics. And of course, as a kid, I wanted to have a mascot of Vučko. As an adult, I wanted to revisit Sarajevo.

When LOT afternoon announced the opening of this route, I quickly figured out that the published flight schedule allows you to make a perfect city break: you leave Warsaw on Saturday morning and leave Sarajevo on Monday. 3-day city break in Sarajevo – why not! I even rescheduled my flight to Ostrava to free up one weekend in early July.

After heavy rain and thunderstorm last night, the air temperature has dropped, which gives relief from recent days of heatwave. I have left my flat just a few minutes before 8 am. Then I catch a bus #189 and change to #175, which terminates at the Departure Hall of the Warsaw Frédéric Chopin airport. 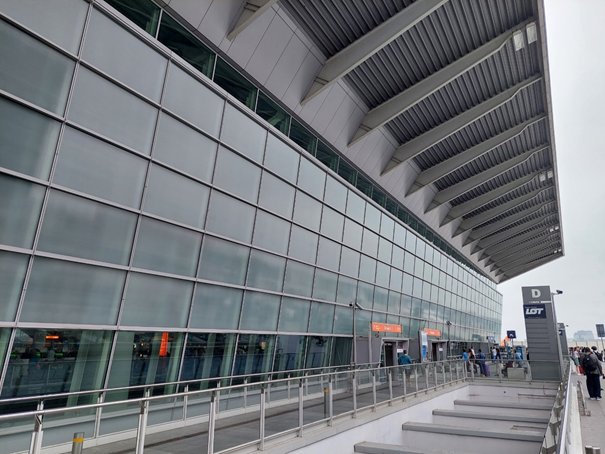 Routine check-in, security and then passport control was surprisingly swift, which gave me enough time to explore what the duty-free shops have to offer. According to the display screens, the boarding should start at 09:35, but a few minutes prior to this time, the boarding time is being updated to 09:45. The boarding starts with no further delay. At the boarding gate 5N, some passengers with rather large hand luggage are subject to additional checks. Their hand luggage is weighed and checked if it fits the required size. If it does not follow both weight or size requirements, each oversize bag is tagged, and they are asked to drop off their bags on the tarmac before boarding, so the ground staff can place them in the hold. But I am not certain if they have to pay excess luggage charge or not. While scanning my boarding card, I hear a long beep and the following text is displayed on the screen: seating issue. A gate agent checked my boarding pass and replaced it with a new one. She informs me that my seat has changed from 4D to 7D and asks me if I am ok with the change. After my confirmation, I proceed down the staircase to the parked bus. 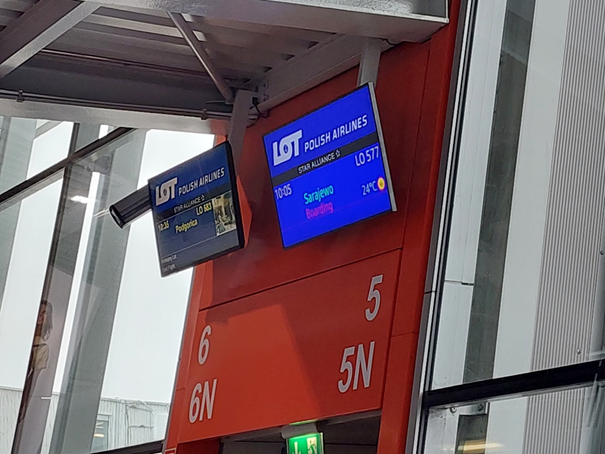 Inside the bus, a mixture of passengers speaking English, Polish, Bosnian and Dutch. There is a significant number of Polish nationals on their way for a holiday in Sarajevo and perhaps to Bosnia and Herzegovina, which is still unexplored by many Europeans. The bus stops at the 18.1 years-old aircraft, an Embraer ERJ-170LR (registered SP-LDE), which has already completed only one sector on a domestic route Rzeszów – Warsaw as the rotation to Prague was cancelled. 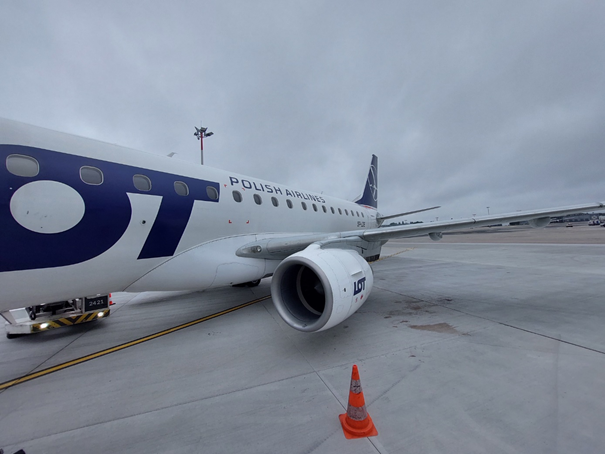 Inside the aircraft, I take the assigned seat 7D. To my luck, the seat next to me is unoccupied, so I have some more space. Boarding is completed and the cabin crew prepares the cabin for take-off. Short taxi and we are off to Sarajevo. After reaching cruising altitude the cabin crew distribute sanitizing wipes followed by complimentary service: a sweet or savory bun, still or sparkling water, tea or coffee. While enjoying the complimentary service, I draft this report on the printouts of my flight reservation. 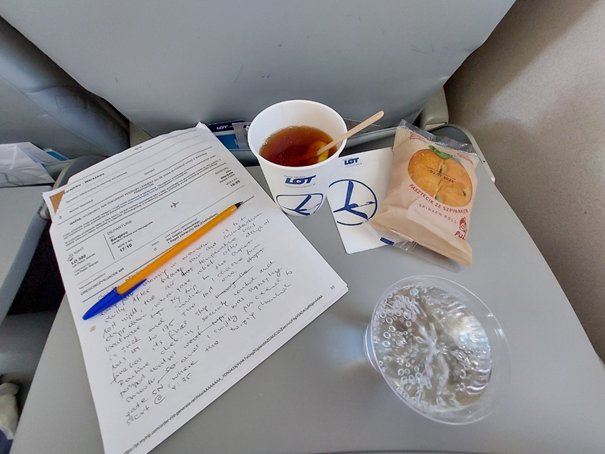 As the flight progresses, the clouds disappear and I try to guess the flightpath, by recognizing landmarks such as main rivers or lakes. Sometimes they can be misleading, but today I am 80% sure I recognize the Daube River. Later, I confirm on flightradar24.com, it was indeed the Daube River. 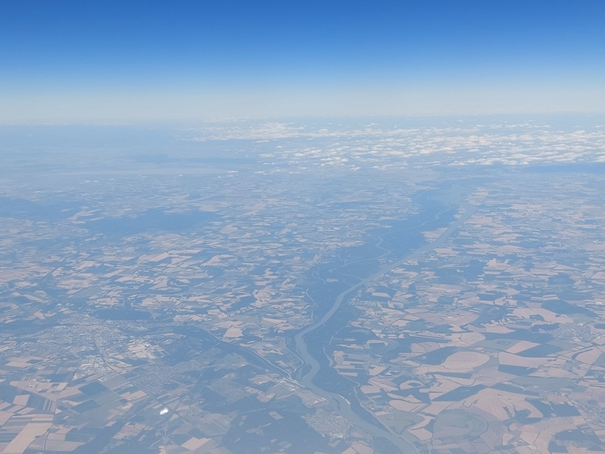 Today’s flight path is south of Cracow, over the Balaton Lake and the Sava river, after which the aircraft enters the territory of Bosnia and Hercegovina around the village of Dolina Donja. Having still some time to spare, I flip through last month’s in-flight magazine Kaleidoscope, which features an article about Kosovo’s capital – Pristina. I take a copy of the magazine home, so I can get inspired before my trip to Kosovo in late August. The report of the trip will make the third (and the last) part of “Yugoslav summer” series. 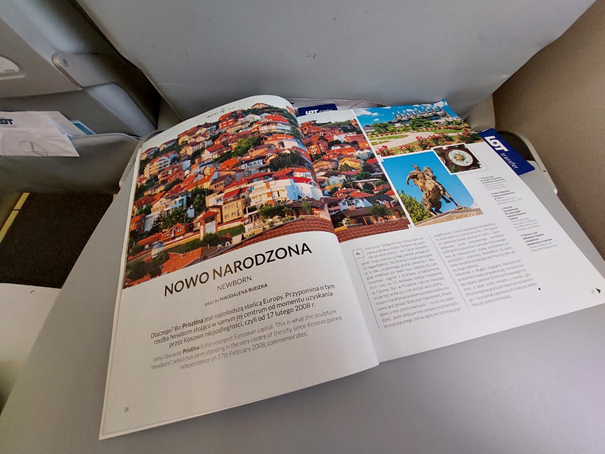 Shortly, the cabin crew announces landing in 20 minutes and prepares the cabin for it. At 11:54 we touch down at Sarajevo Airport, where, after a short taxi, the aircraft parks at one of the air bridges. After passport control, I collect my luggage and grab a cab to my hotel. The aircraft, after a short stay, returns to Warsaw then makes three more domestic sectors this day: Warsaw – Katowice, Katowice – Warsaw, Warsaw – Gdańsk. 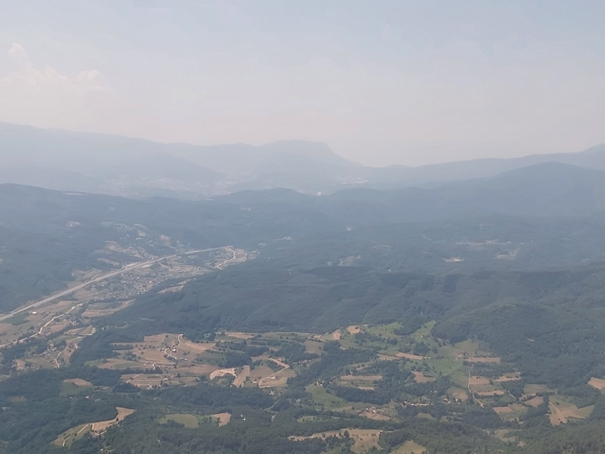 Once upon a time, Sarajevo became well-known to the world as the host city of the Winter Olympic Games in 1984. Many infrastructure projects were completed, sport objects were built and many people from the former Yugoslavia, along with visitors from other countries, came to Sarajevo to support the athletes. No one would ever think, that several years later the city will be ironed for almost 4 years.

I visited Sarajevo in 2015 for the first time. While walking in the city, I had the impression like the war had just ended as many buildings had many bullets or shells holes and other rather unusual damages on the walls. In 2022 the holes still exist, but they seem to disappear as more buildings receive a new facade. To learn more about the Siege of Sarajevo, I took part in an organized trip. The 4-hour long informative tour told the tragic story of the Siege of Sarajevo, the Tunnel of Hope, the story of Vidikovac viewpoint, infamous Sniper Alley and the history of death of Admira Ismić and Boško Brkić, whose tragic story was featured in the documentary move “Romeo and Juliet in Sarajevo”. This tragic story touched me more than ever.

Today’s Sarajevo still holds its oriental charm where the Orient meets the West at the Old Town of Baščaršija. The charm of this place is enhanced by cobbled streets, mosques and oriental-style shops offering a mixture of generic souvenirs and fine craftsman products such as copperware, woodwork and sweets. Plentiful cafés or restaurant are a perfect spot for a cup of strong Bosnian coffee, a snack or a drink for a short break. If you like to see a panoramic view of the city then head to the Yellow Fortress or take a cable car to the mountain Trebević, from where you can admire the view of the city. 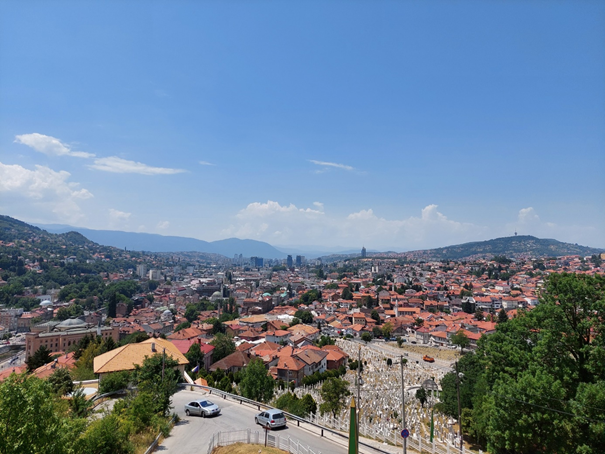 The last day is a lazy one. After lunch and coffee at Sarajevo Shopping Centre, I stop to buy a few bottles of Bosnian wine to take home, as Bosnian wines are not easy to come by in Poland. I choose two bottles of white and one bottle of red wine, all from the Mostar region. Then I return to my hotel to pick up my bag, pack my shopping and order a taxi to the airport. The journey takes 15 mins and the taxi driver drops me at the Sarajevo Airport terminal. While the outside of terminal is revamped, the interior still preserves the 80-ties charm, when the new international terminal was constructed for the XIV Olympic Winter Games in 1984. 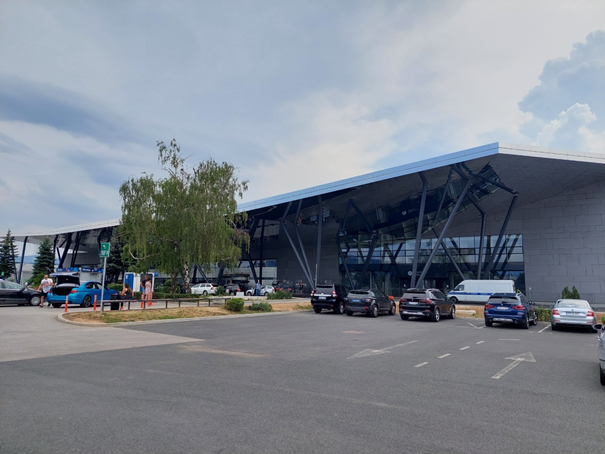 The check-in for flight LO580 is open and two check-in desks are allocated for this flight. There is a short queue to check-in, and I recognize some familiar faces from my previous flight LO577 two days earlier. After short waiting, I get to a check-in desk where my bag is tagged to Warsaw, and I receive a boarding card. Then I proceed via the escalator upstairs to security and passport control, which takes less than 10 mins. 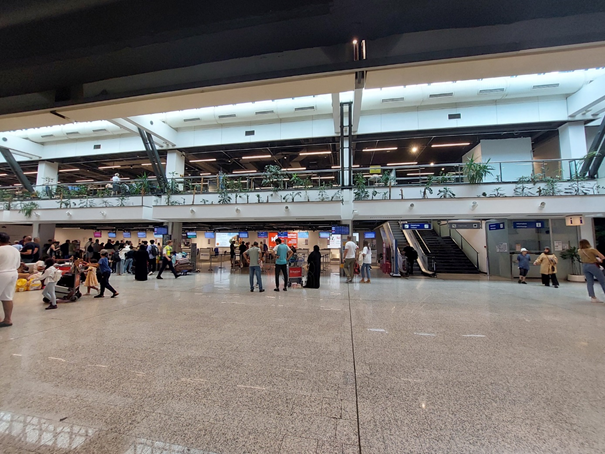 In the departure hall, I check the display screen to see which gate is assigned for my flight, then I head to a small café for a cup of coffee. Around 16:50, the airport staff announces the boarding of my flight at gate 1. 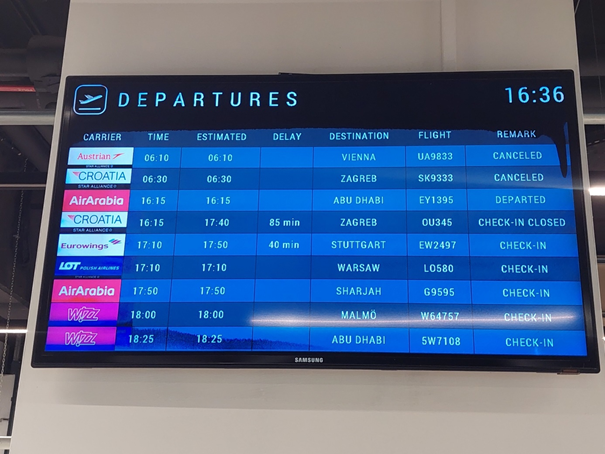 Today’s flight is operated by the 12.1-year-old Embraer ERJ-175LR registered as SP-LIL, which already completed 4 segments today: Milan Malpensa – Warsaw, Warsaw – Rzeszów, Rzeszów – Warszawa and Warszawa – Sarajevo. After checking my boarding card, I proceed to the aircraft via an air bridge. Inside, I take the assigned seat 8A and again the seat next to me is unoccupied. 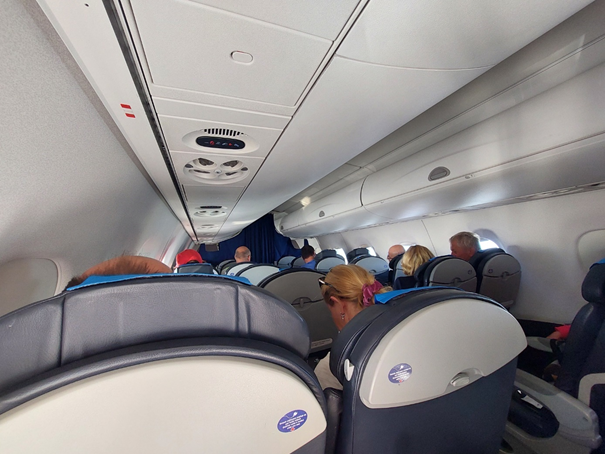 After a short taxi, we take off at 17:14. Shortly after take-off we cross the Miljacka river and proceed north towards Osijek, Budapest and continue over the Tatra Mountains, entering Polish airspace near Zakopane then head towards the town of Kielce – 150 km south of Warsaw. 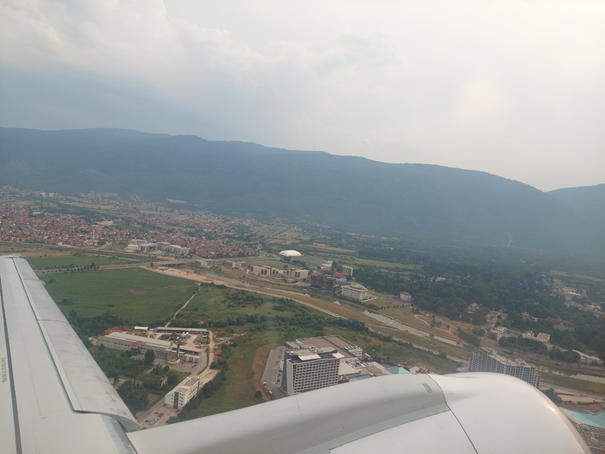 The flight is uneventful and time passes relatively quickly. After complimentary service, I purchase a bottle of Italian prosecco for 20 PLN and read some articles in the July issue of the in-flight magazine Kaleidoscope: one featuring Dubrovnik, another Rijeka region and one about ever-changing Warsaw. 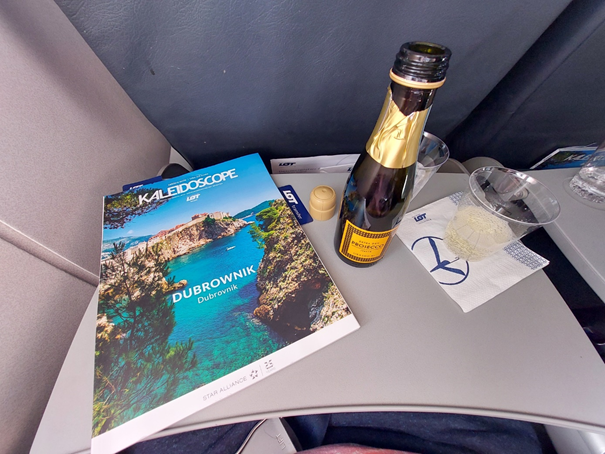 After passing Kielce, the cabin crew prepares the cabin for landing for Warsaw Airport. We touch down 30 minutes before scheduled arrival time. Several minutes later, we reach our parking position and disembark the aircraft via air bridge. After passport control, I proceeded to luggage reclaim area where I collect my bag inclusive of 3 intact bottles of Bosnian wine. 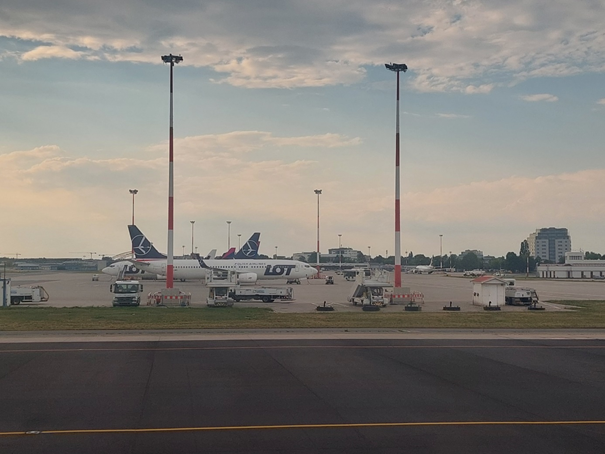 Share your travel experience by submitting a trip report to exyu@exyuaviation.com