TEXARKANA, Texas – All things come to an end – or do they?

That’s the theme explored in “A Möbius Trip,” the 2022 Crossmen show. Texarkana was treated to glimpses of the show last week during the San Antonio-based youth performance organization’s two-day rehearsal at Texas High School ahead of a Drum Corps International competition July 21 in Round Rock, Texas.

“The show is very interesting. It’s centered around a Möbius strip, or how there’s no beginning or no end,” said corps director and development lead Nick Putnam, who took time from his administrative work to speak with the Gazette.

Putnam, a DCI veteran who has been with the Crossmen for about 10 months, said a marching band show has several movements — four, five, “or whatever the number of movements there may be” — that are played in the same order for each performance. Not so with “A Möbius Trip,” the Crossmen’s return to competition after a two-year pandemic pause.

“With this show, we can perform them in any order, so we could kind of watch them all within the lines of the Mobius strip. It could go 1, 2, 3, 4 one night to 2, 3, 4, 1 the other night and so on,” Putnam said, adding it took a team about six to seven months to arrange the show.

The goal is to evoke a sense of something with infinite possibilities – the idea embedded in the mathematical object named after German mathematician August Ferdinand Möbius. The rearrangeable musical sections in the Crossmen’s show feature “Symphony No. 2, Movement 4” by Gustav Mahler; “Equus” by Eric Whitacre; “Addis Ababa by Guillermo Lago; “Alfonso Muskedunder” by Todd Terje; and “Re-Entry” by Philip Sheppard.

“It’s an energetic, nonstop show,” Curtis said. “There’s always something going on. It’s takes virtuosity to achieve. It takes a lot to get it clean.”

“It’s obvious what we’re putting out there. The performance is something everyone can enjoy – from the judges to the grandmas in the stands.”

The Crossmen came to Texarkana on July 17, a day after competing in Memphis. The 160-member corps of 15- to 20-year-olds fanned out across the THS campus over two days to perfect parts of their performance – from brass and drums to marimbas and color guard. At night, they migrated to Tiger Stadium at Grim Park for a unified rehearsal in a competition-style setting before an informal crowd that sat in the stands.

Putnam said Texarkana “was just right there in the middle” as the Crossmen traveled from Memphis to Round Rock, so he gladly accepted when Texarkana Independent School District’s director of music Arnie Lawson offered used of THS to workshop the show.

“I wish like once we go to these different towns and cities that we could spend more time in them,” Putnam said. “We only see like this side of it, being at the school, but it’s been good.”

However, the corps’ time here was not without its difficulties, especially in the form of 11-hour practices in triple-digit heat.

“The heat is extremely challenging right now,” Putnam said. “We’ve been giving them some nap blocks to kind of substitute being outside.”

The group also reserves outside practices for the morning and night, when the heat is not as intense.

There are also concerns about the coronavirus, which can wreak havoc on breath control and stamina – key elements of a marching band performance.

“COVID, it’s something as a country we’re all dealing with. Still, it’s enhanced at a further level here, because everyone’s all together at the same time,” Putnam said. “If one person gets COVID, that becomes really challenging.”

The director said the corps has dealt with its “fair share of COVID cases.”

“But thankfully, we are pretty much eradicated now, which is good.”

Registered nurse Carol Ysaguirre has her hands full keeping an eye on the health of the 160 members of the corps and the approximately 40 members of the traveling staff – but she welcomes the work.

“It’s great to see it, to live it and to give back,” said Ysaguirre, a mellophone player who performed with a Drum Corps Associates team when she was younger.

The corps also is close to Jenny Cepeda’s heart.

“They are the best kids, the most talented performers on the Earth,” said Cepeda, who operates the Crossmen food truck.

Cepeda, who is in her second year on the staff, said the corps’ nutritional needs are sufficient. For instance, for breakfast, she prepares 24, 50-count boxes of French toast sticks. Lasagna requires at least 50 pounds of ground beef.

But Cepeda has a simple reason for staying at the burner from sunrise until nearly midnight: “My kids are special.”

The current group of Crossmen are also special because they were joined during what Wyeant called a time of post-COVID rebuilding for the nearly 50-year-old organization.

“It’s incredible to see how much everyone has grown,” the drum major said.

The Crossmen tour during the summer, but auditions are held the previous November in a series of camps. Young musicians unable to attend the camps can submit a video audition, Putnam said.

This year, the video auditions proved fruitful, with two musicians from the UK and one from Japan joining the group.

Putnam said it costs about $10,000 to care for each young musician for the summer. Thus, new Crossmen pays a fee of about $4,900, which the organization matches with about $5,000.

Still, the Crossmen organization does not want money to be a barrier for talented students eager for the musical experience.

“We offer a variety of scholarships for them,” Putnam said. “This year, we had about $75,000 of scholarships that we had provided to the membership. We had one specifically for our color guard members that reduced tuition for them by $1,000.”

Altogether, Putnam estimates the annual summer budget for the nonprofit Crossmen is $1.6 million. He said the organization welcomes financial support.

“They can go to Crossmen.org and find information on how to donate there. Donations definitely help make this go around.”

So far, the Crossmen have completed 13 competitions and are currently 13th in the DCI rankings, owing in part to Saturday’s performance in San Antonio.

“Our Saturday performance was the best run of the season,” Putnam said by email Sunday.

With eight competitions left until the Aug. 11 DCI world championship preliminaries, Putnam has a clear performance goal in mind.

“I want for the students to obviously be in the DCI finals, which is the last performance of the season for DCI. I’ve experienced that myself, and it’s just such a great experience, I really want that for them.”

Yet, points and ranking are not the only things the director wants for the group of musicians with whom he has bonded over the past few months.

“At the end of the season, I want everyone to feel really good about being here and coming out and having a great experience and for them to be able to look back in their life and realize that, you know, the things they’ve learned are very applicable,” Putnam said. “So, yeah, I just want them to have a great experience.

(To follow the Crossmen’s journey, visit Crossmen.org. Track the DCI rankings and schedule at dci.org.) 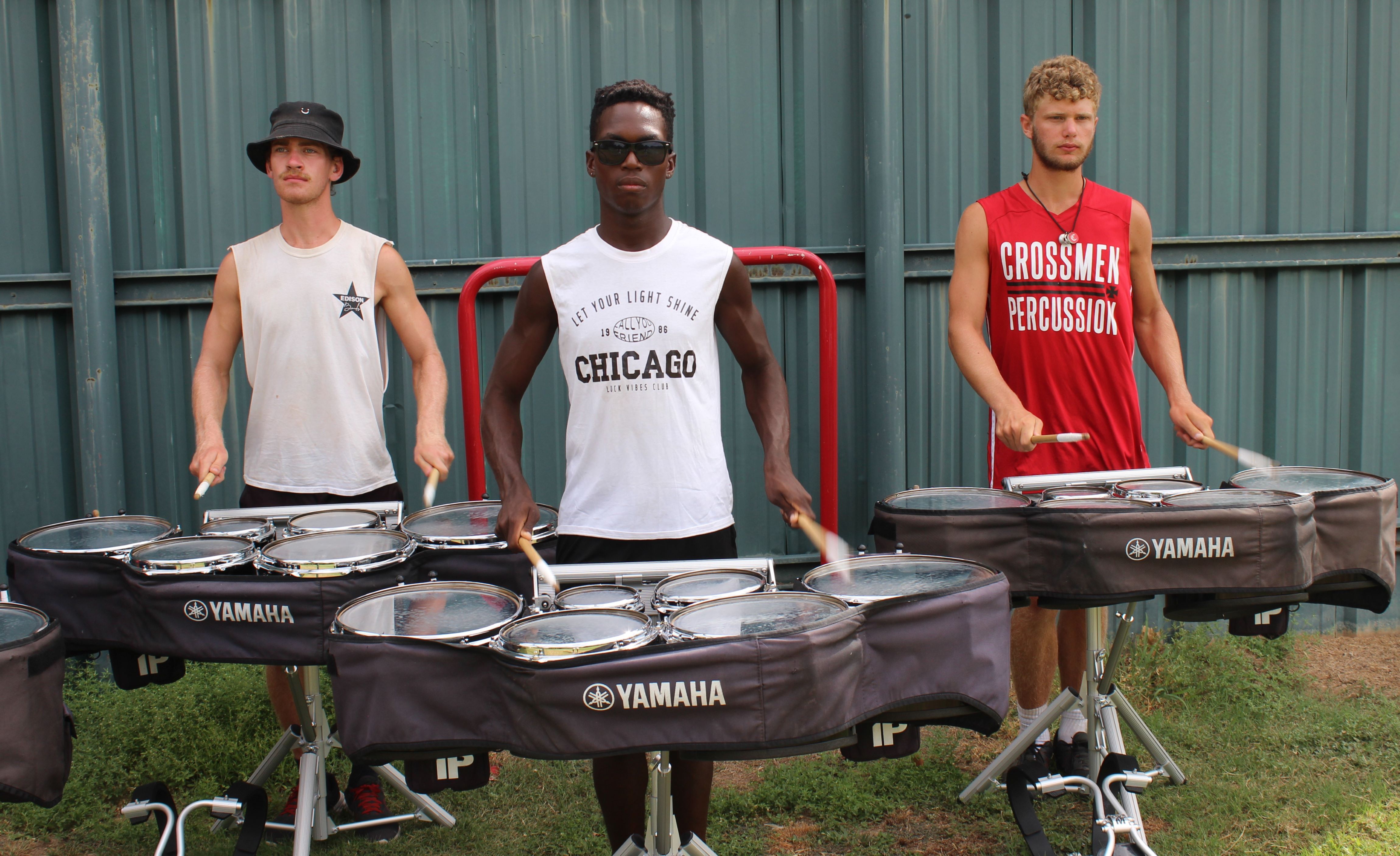 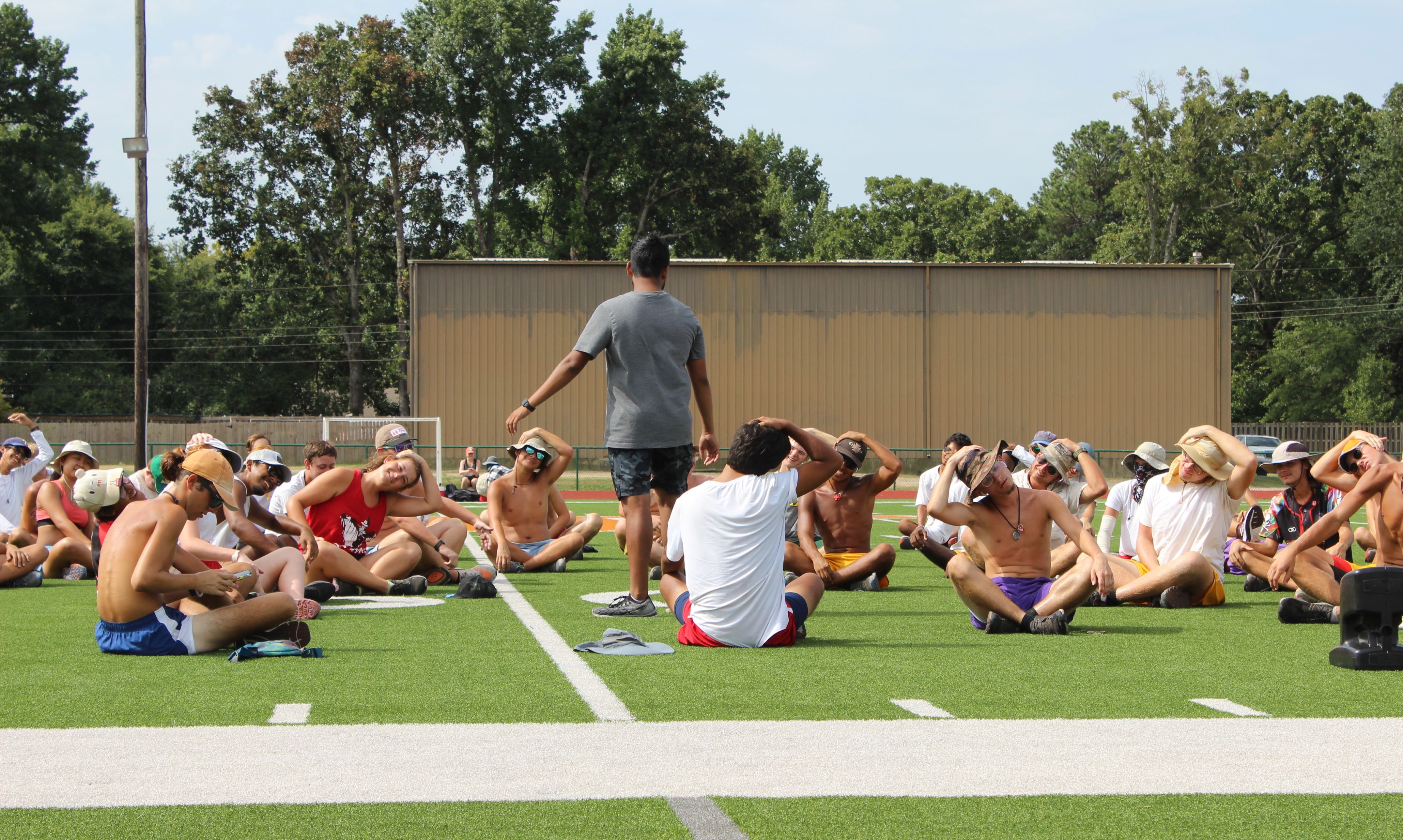 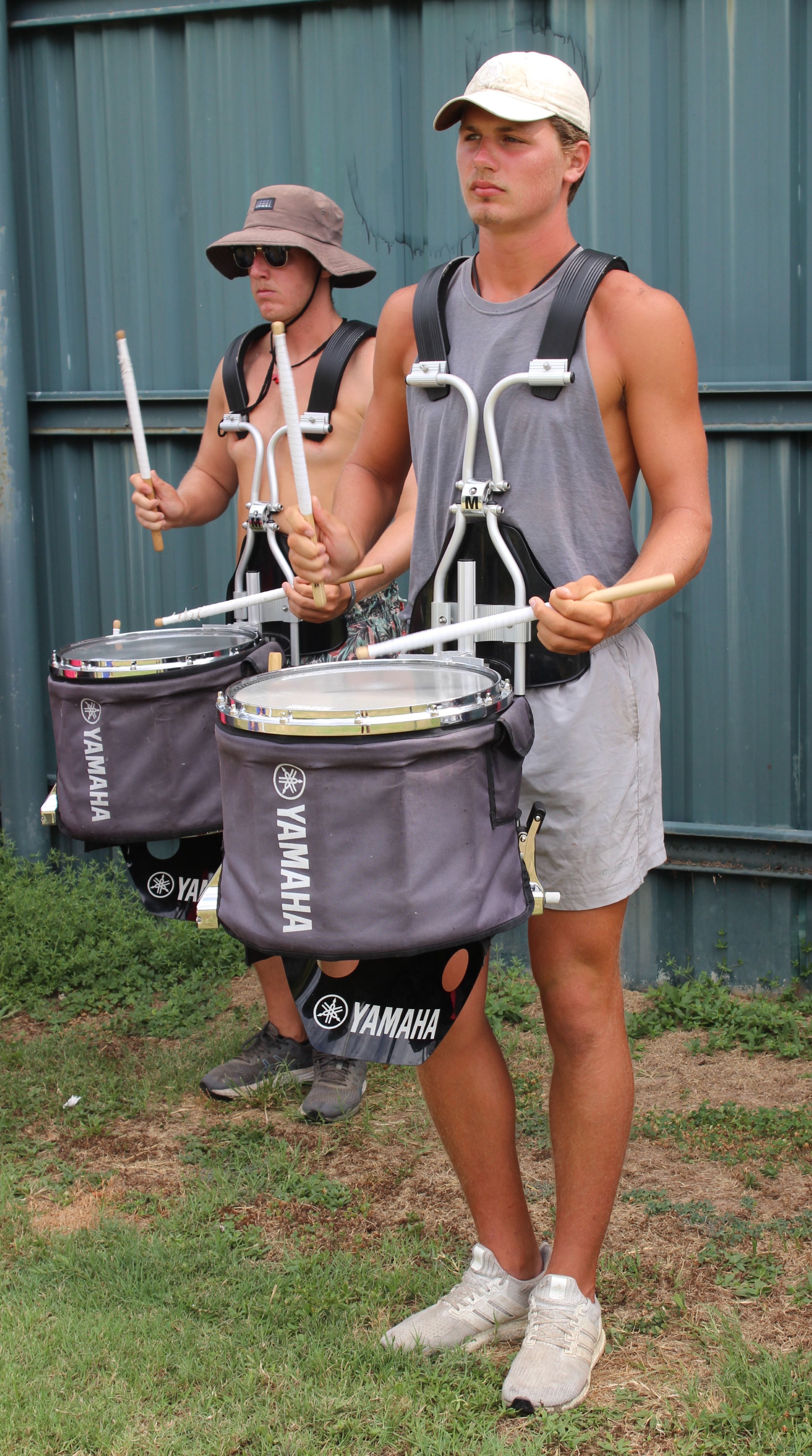 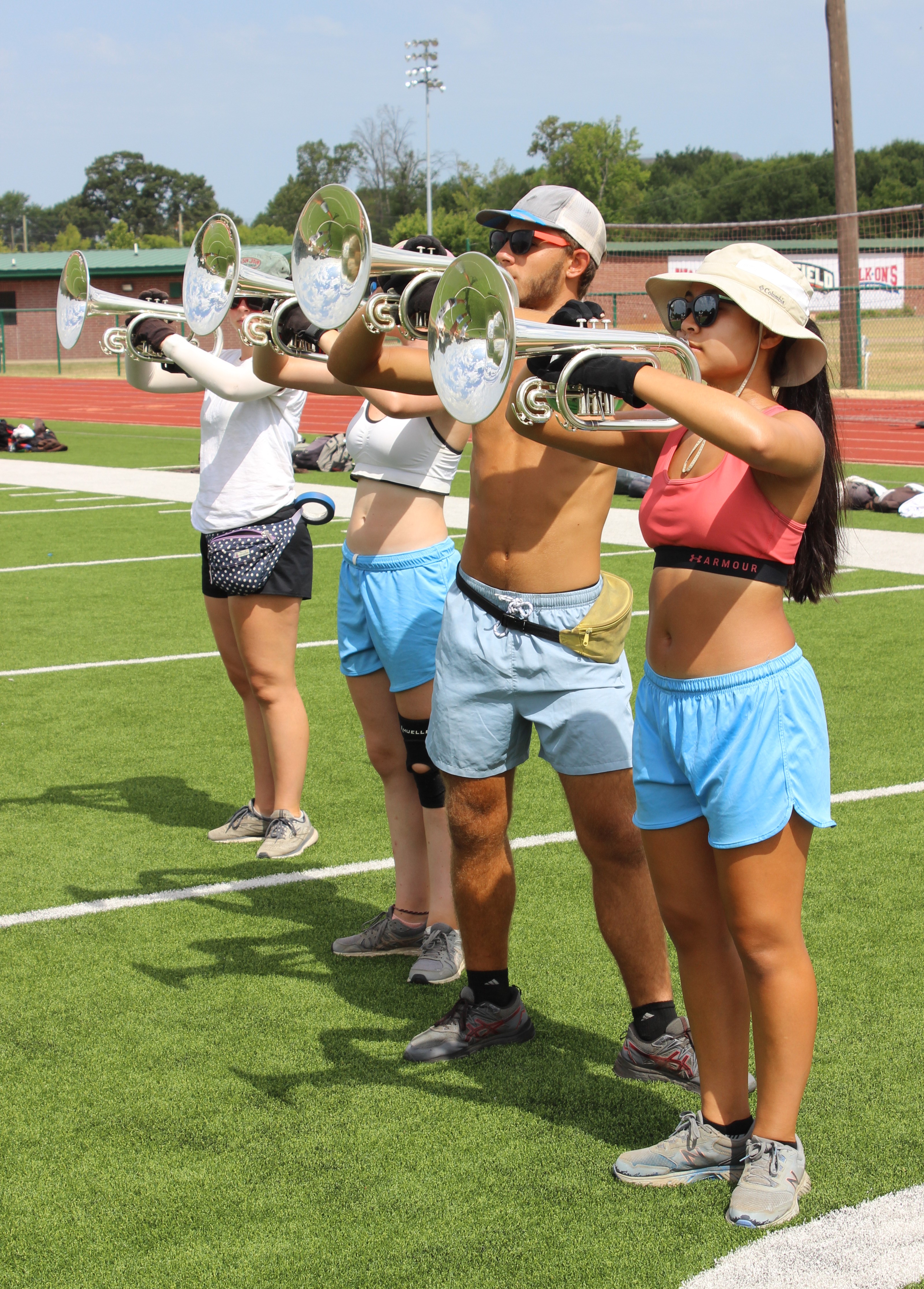 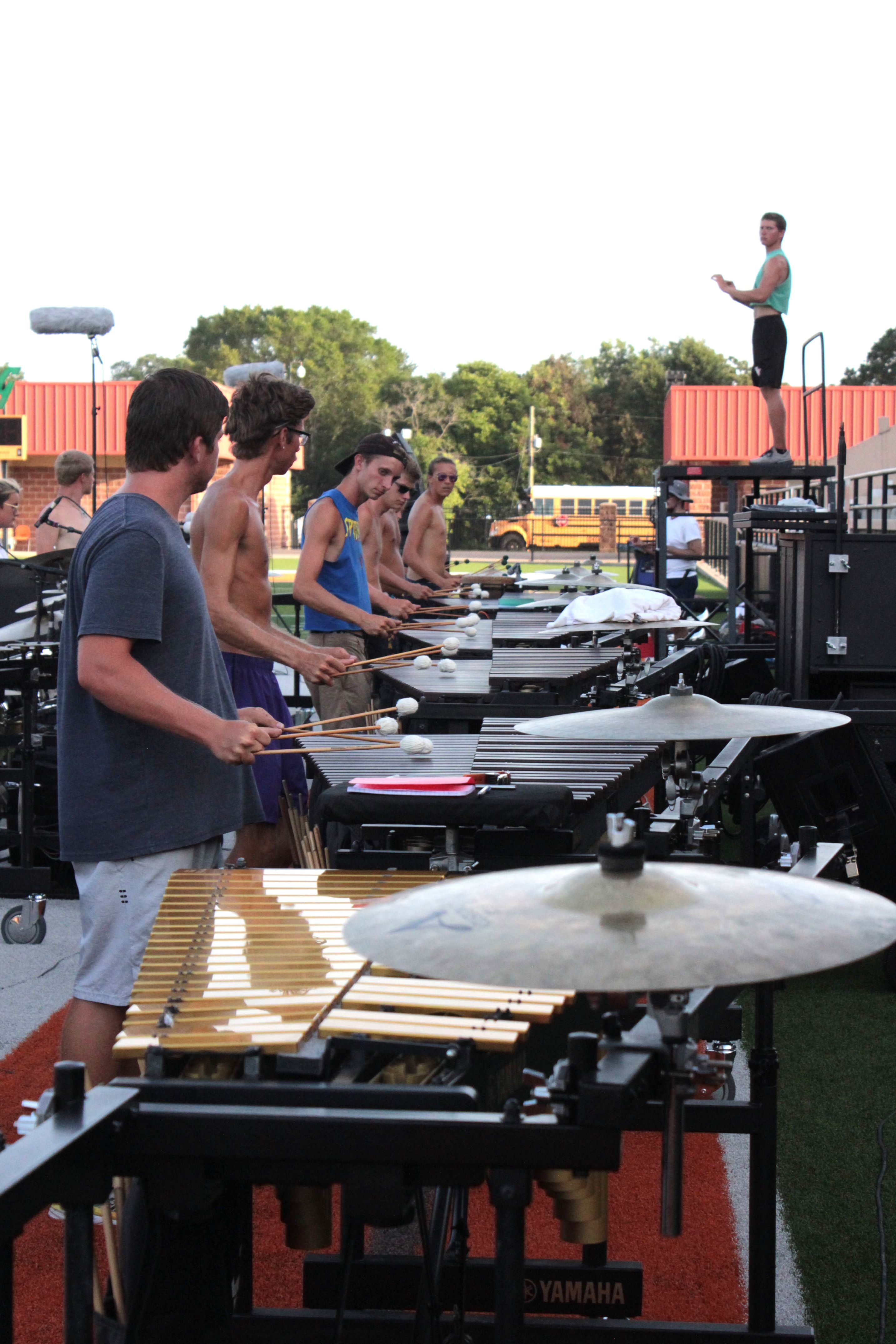 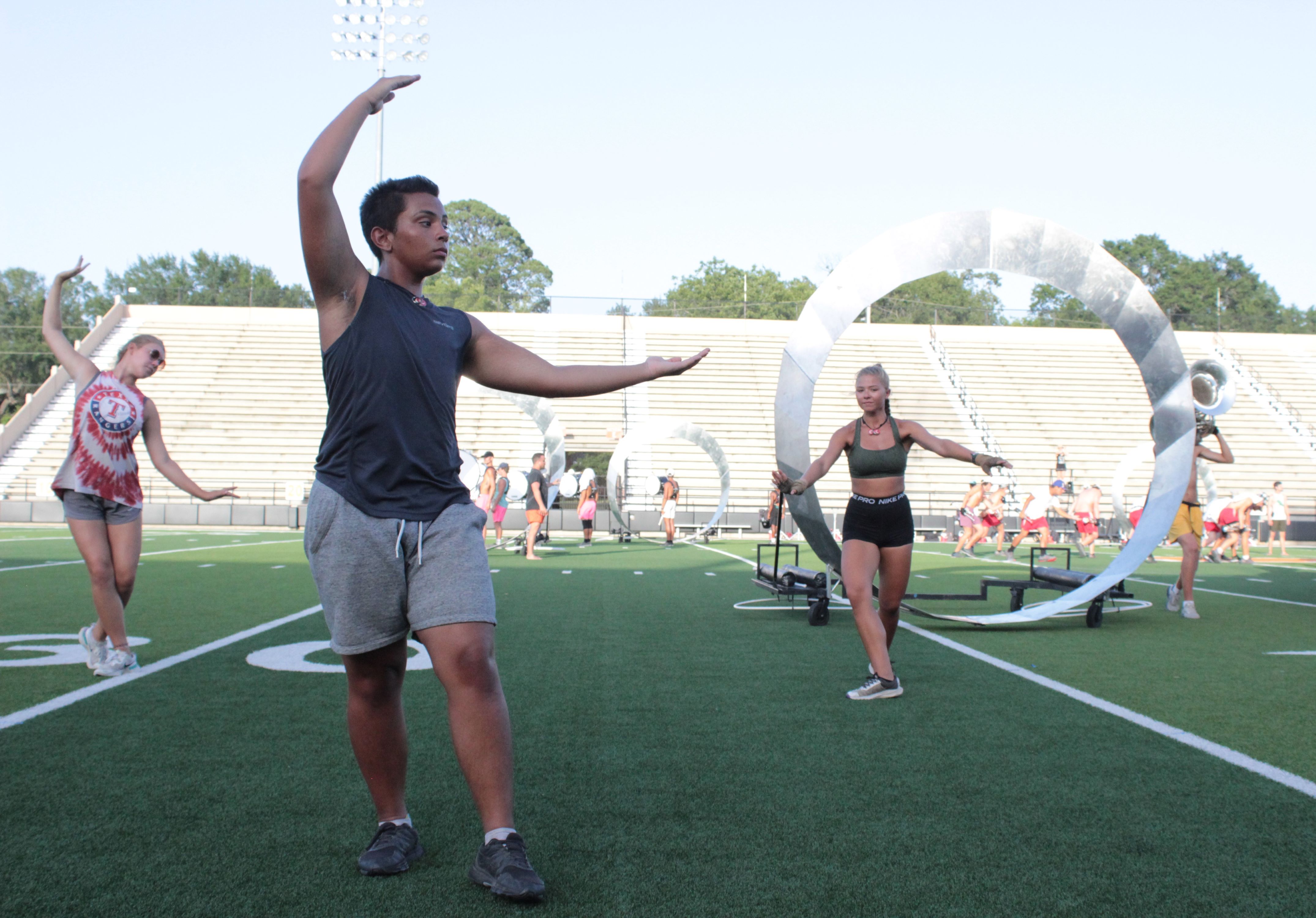 Members of the Crossmen rifle group get into the ready position as they work on choreography Monday, July 18, 2022, at Tiger Stadium at Grim Park in Texarkana, Texas. (Staff photo)