Even before touching ground, I realized this would be a trip to remember.

At the risk of sounding easily impressionable, the trip to remember.

I was sold on United’s cunning seasonal route to Mallorca from the get-go.

United Airlines has devised a new seasonal route between New York and Palma, the capital of Mallorca (above). Andrea Blanco ‘was sold from the get-go’ 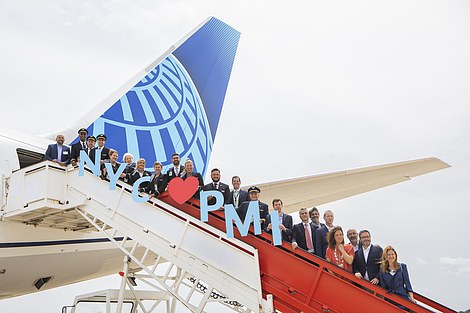 The crew of United’s first direct flight to Mallorca pictured after the plane touched down in the capital, Palma, on June 3, 2022

And as the plane descended, it felt almost inconceivable that there wasn’t always a way to get directly from the Big Apple – or indeed the USA – to the spellbinding Spanish Island.

I could not take my eyes off the scenic views of beautiful, quintessentially Spanish ivy-covered houses in ruins from my window as the plane descended into Palma, the capital.

But it wasn’t until a fancy car worthy of a Bond film drove me through the grand gateway of hotel Castell Son Claret that it became apparent that this island offers total luxury, too.

The five-star hotel is located west of Palma on 326 acres of gorgeously kept gardens reminiscent of Versailles and sits at the foot of the Unesco-protected Tramuntana mountain range.

It’s the epitome of luxury, yet I was received with a warmth and familiarity comparable to being welcomed at home.

I felt like nothing less than royalty as I was driven in a golf cart to my suite, indulging in the tranquil and stunning views of the property and grounds. 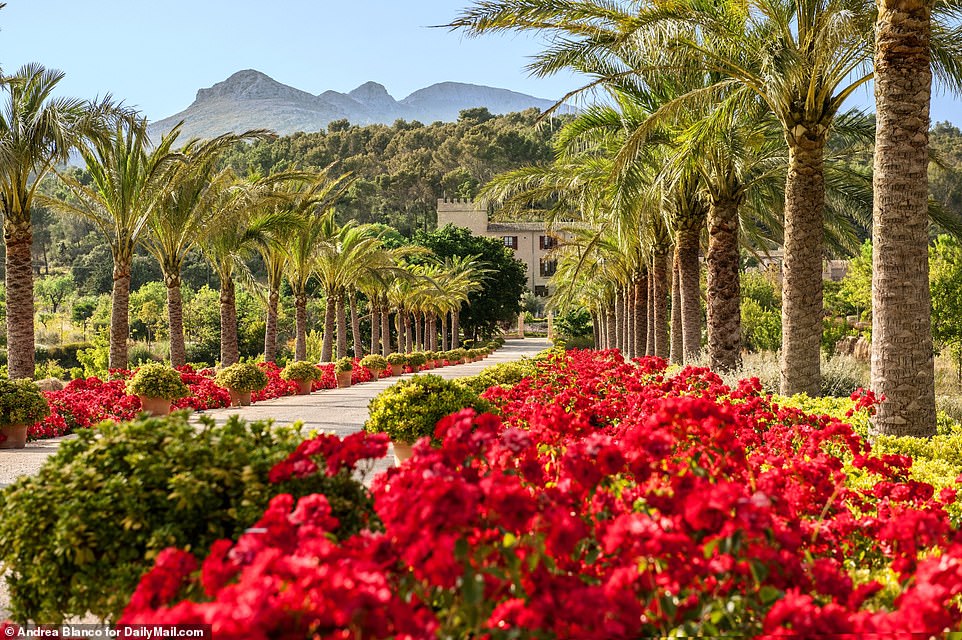 After touching down in Palma on United’s new service, Andrea checked into the Castell Son Claret hotel (above) 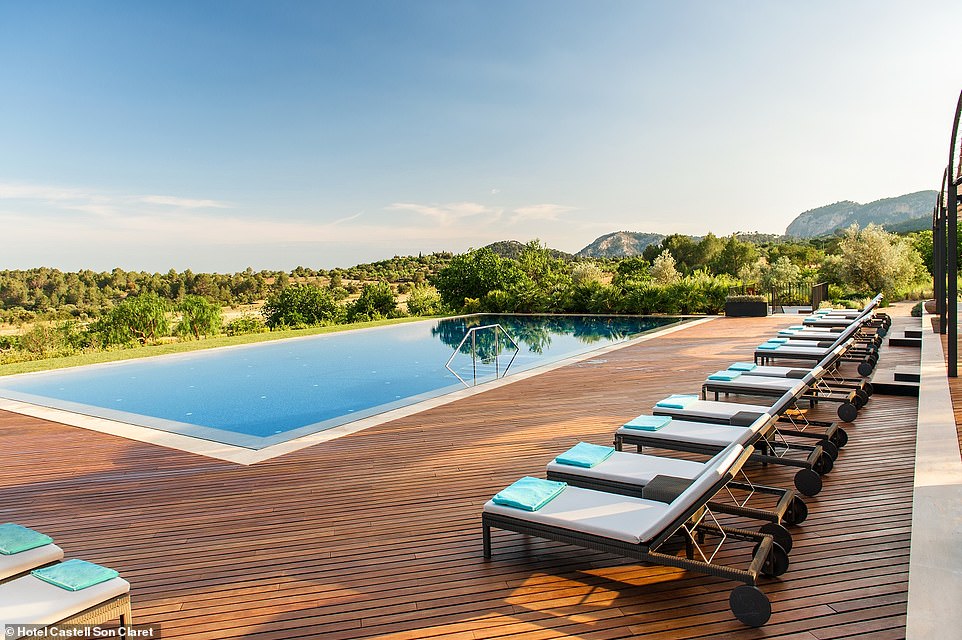 The 18th-century-style hotel offers a wide range of suites for all tastes. From its nostalgic terrace and ‘castle’ suites, where authentic wooded details are prominent, to very modern rooms with the most contemporary features.

I stayed in one of the ravishing pool suites, which featured a comfortable-sized living room and floor-to-ceiling windows that allowed natural light to filter inside.

Still intoxicated with the indescribable feeling of being awakened by the Mallorcan sun, I would roll over in a bed most definitely made by and for angels every morning and wonder whether I was still dreaming. 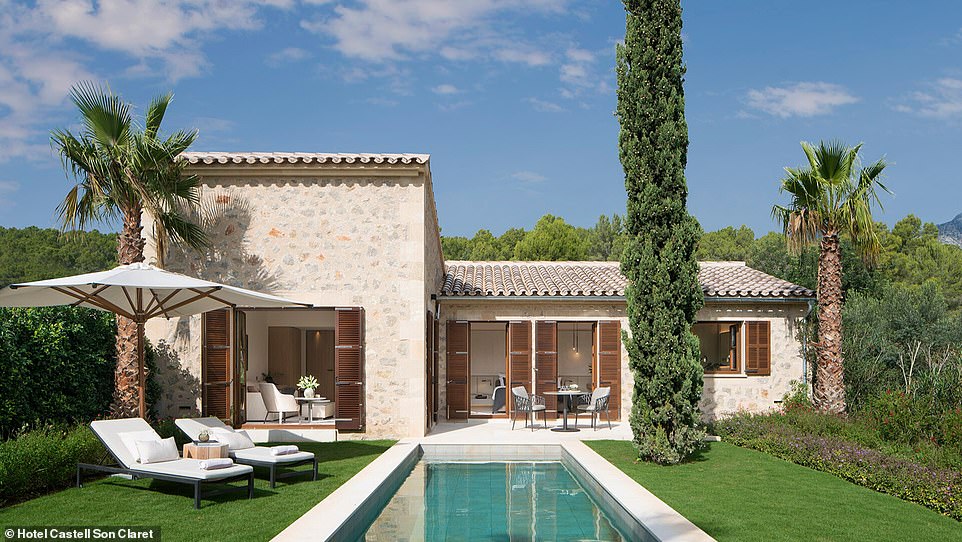 Andrea’s room was a ‘ravishing’ pool suite (above), which featured a living room and floor-to-ceiling windows 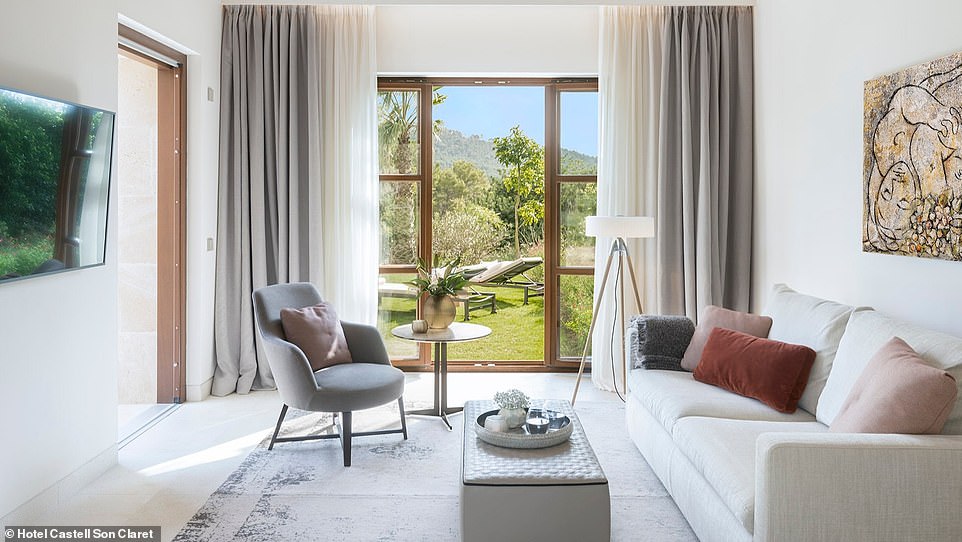 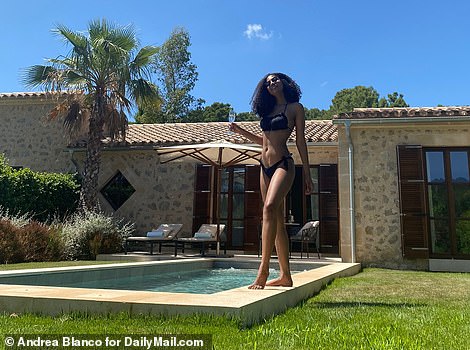 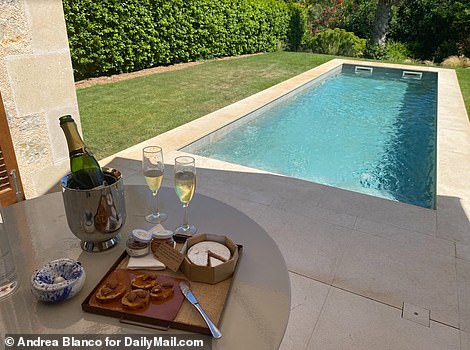 As a summer baby, I made it my first order of business once I arrived in the room to ditch my airplane clothes for the black swimsuit that I, as a lifelong procrastinator, had hurriedly packed the day before.

I spent my first afternoon relaxing in the private pool and soaking in the delicious sunlight, then lazily sprawling out on a lounge chair while enjoying the intimate privacy that Castell Son Claret offers.

Later that night, I would lay on the carefully kept grass and look at the stars in the unpolluted Mallorcan sky, feeling very much like every care I had in the world had surrendered to the calm of this magical place. 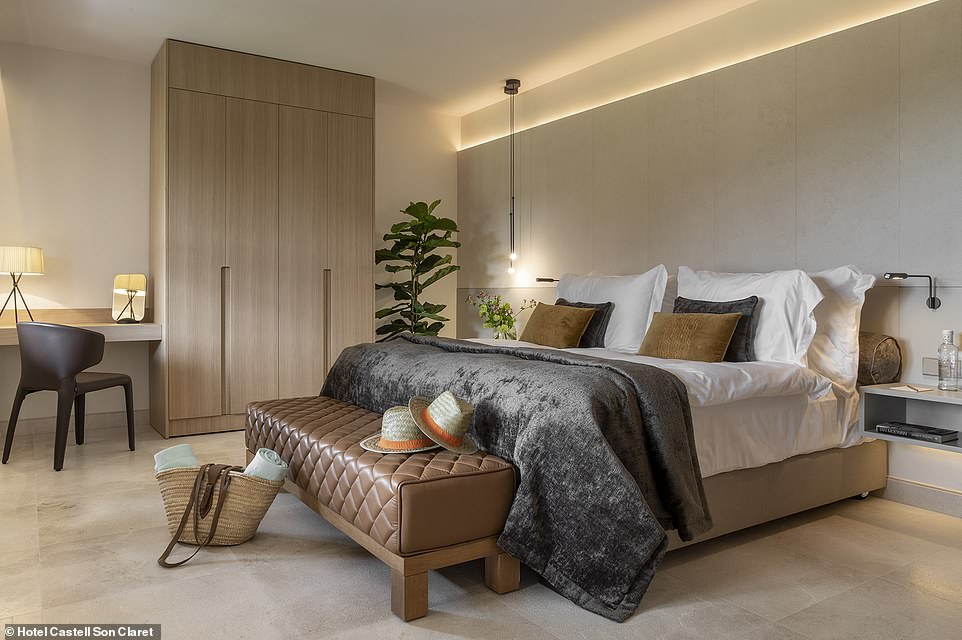 The 18th-century-style hotel offers ‘a wide range of suites for all tastes’, reveals Andrea, ‘from its nostalgic terrace and “castell” suites, where authentic wooded details are prominent, to very modern rooms with the most contemporary features’ 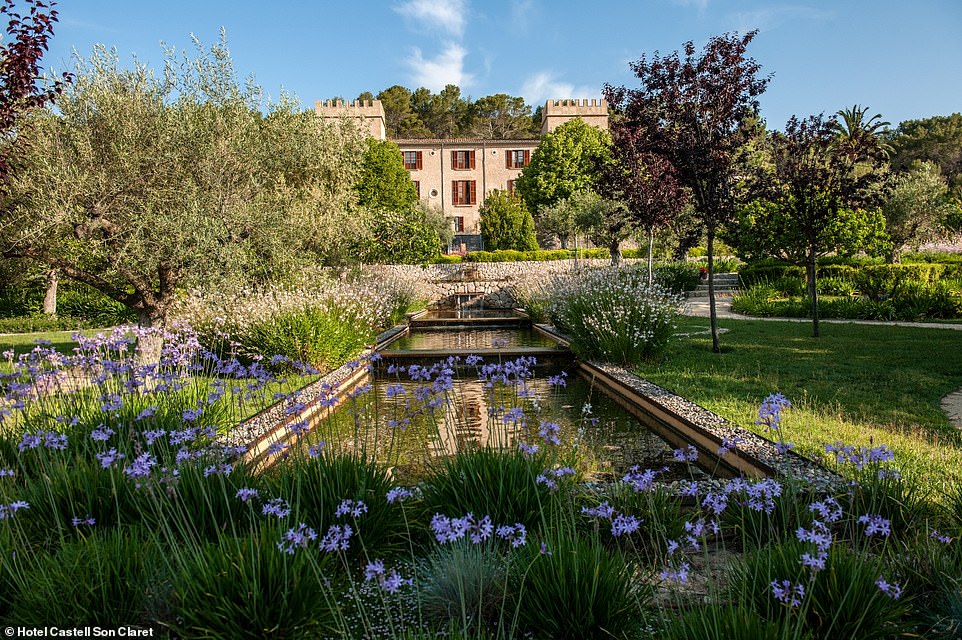 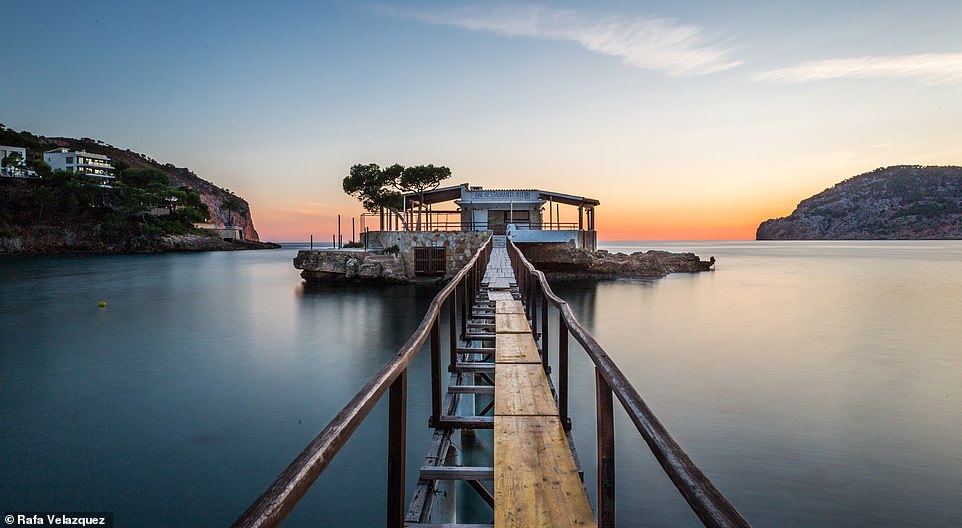 Pictured is the unique Sa Illeta restaurant, where Andrea indulged in paella and sangria. Picture courtesy of Rafa Velazquez 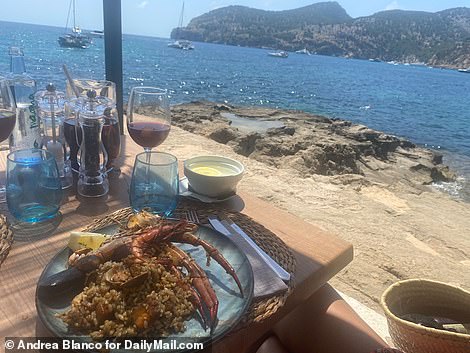 Outside the hotel, I found treasures I will remember for a lifetime.

I wandered through narrow alleyways amid Palma’s wonderful 15th-century apartments and stopped in awe at the grandiose Santa Maria de Mallorca Cathedral, a Gothic structure that, as with much of Palma, is awash with history.

It was built more than 500 years ago on the orders of 13th-century monarch James I of Aragon, who while facing the sinking of his fleet in 1229, swore to God that if he survived and conquered Mallorca, he would build a great cathedral.

He survived, but sadly his cathedral was not finished in his lifetime.

Today, the intimidating structure wows both visitors and the locals who attend mass services inside. 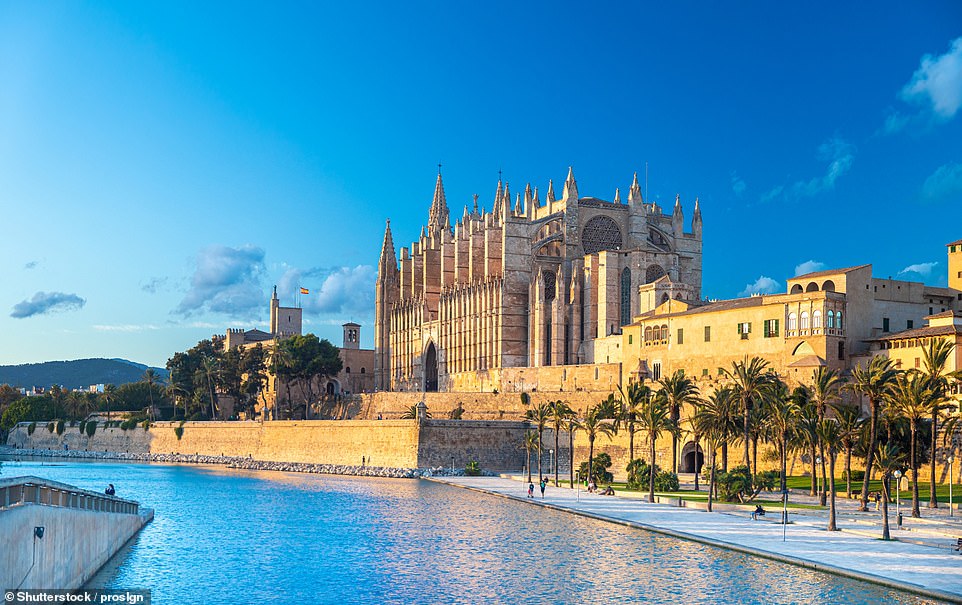 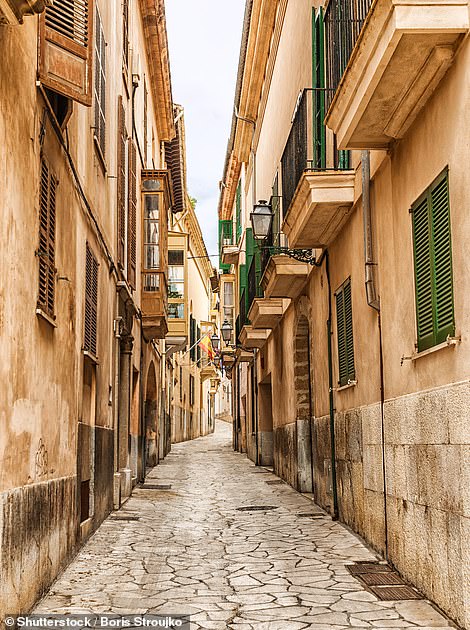 One of Palma’s enchanting streets

Half an hour away is the eye-catching Sa Illeta restaurant, which sits on a tiny island by the resort village of Camp de Mar.

You reach it via a wooden walkway from the beach and once there, you can indulge in delicious paella con gambas washed down with sangria.

While there I listened to tourists laughing as they bathed in the warm waters of the bay, closed my eyes and tried, without luck, to think of a better place to be in to disconnect from mundane worries.

My dining experiences at the hotel were also other-worldly.

At the a la carte Olivera restaurant, as I sat on the terrace, feeling mesmerized by the scenery of the Tramuntana and the unbelievably-blue sky’s sunset reflection on the hotel’s pool, I was treated to mouthwatering dishes.

I was blown away by the most colorful and delectable ceviche I’ve ever had, the lemon tartar with blueberry ice cream, and my ultimate favorite: cod fish, calamari and Iberico ham croquettes. 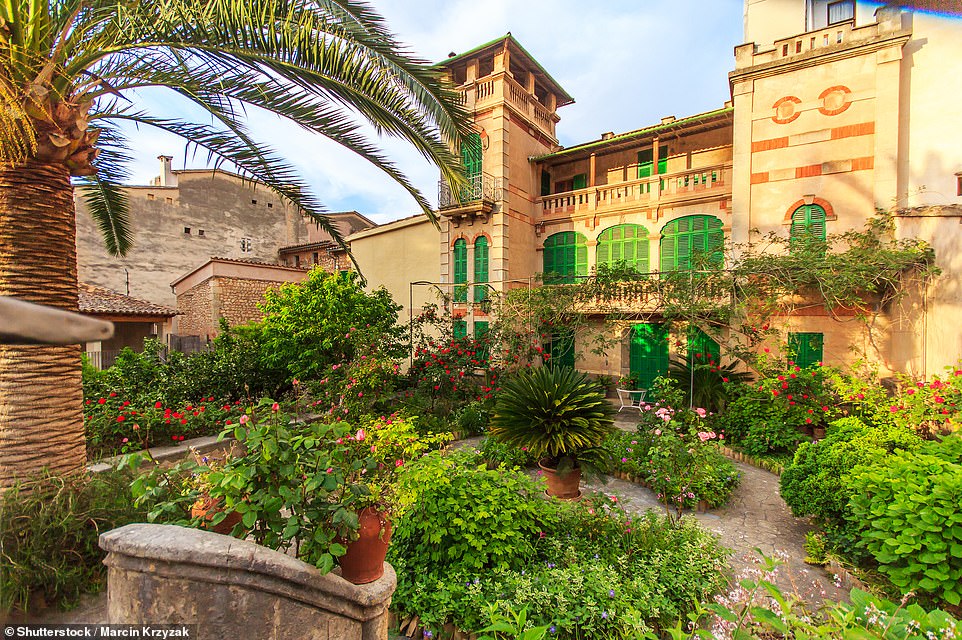 Palma is awash with history and brimming with charming old buildings. Andrea describes it as ‘wonderful’ 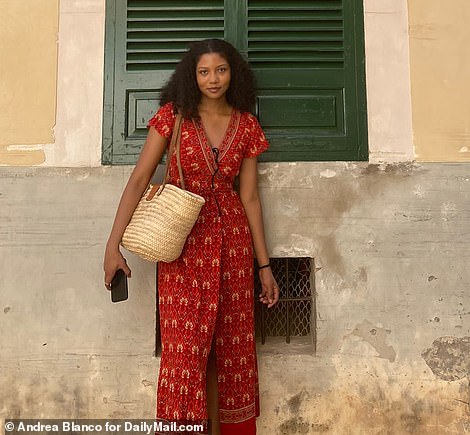 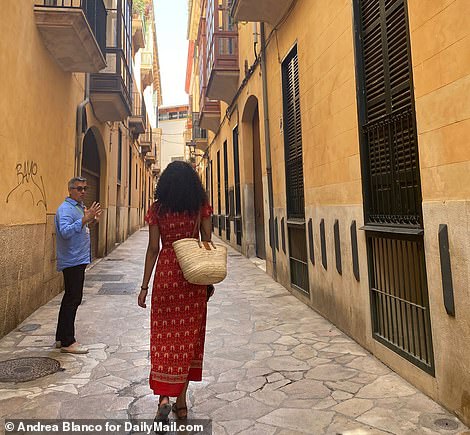 On another night, I ordered entrecote with fries – guilty American here – while my friend chose the secreto Iberico joselito.

I will have to admit I stole one – or five – bites from her plate in order to tell you that if I had to choose only two dishes to eat for the rest of my life, I would choose those options without hesitation.

The breakfasts at Olivera were similarly impressive – a carnival of Montana eggs, fresh fruit salads and yogurt cereals, and curated selections of Spanish hams and cheeses. 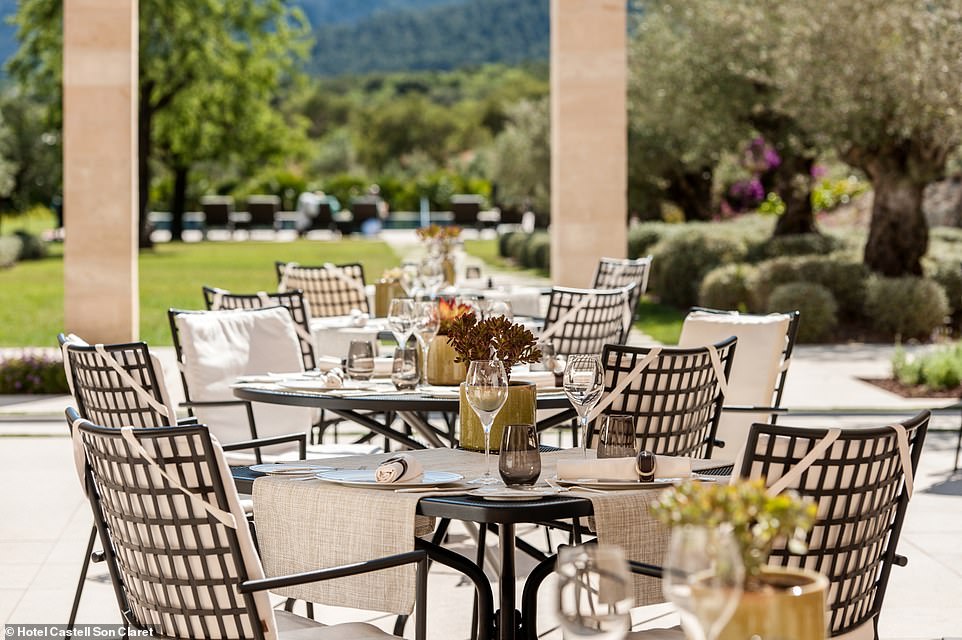 Andrea had dinners on the terrace of the Olivera restaurant (above), as the sunset reflected on the hotel pool 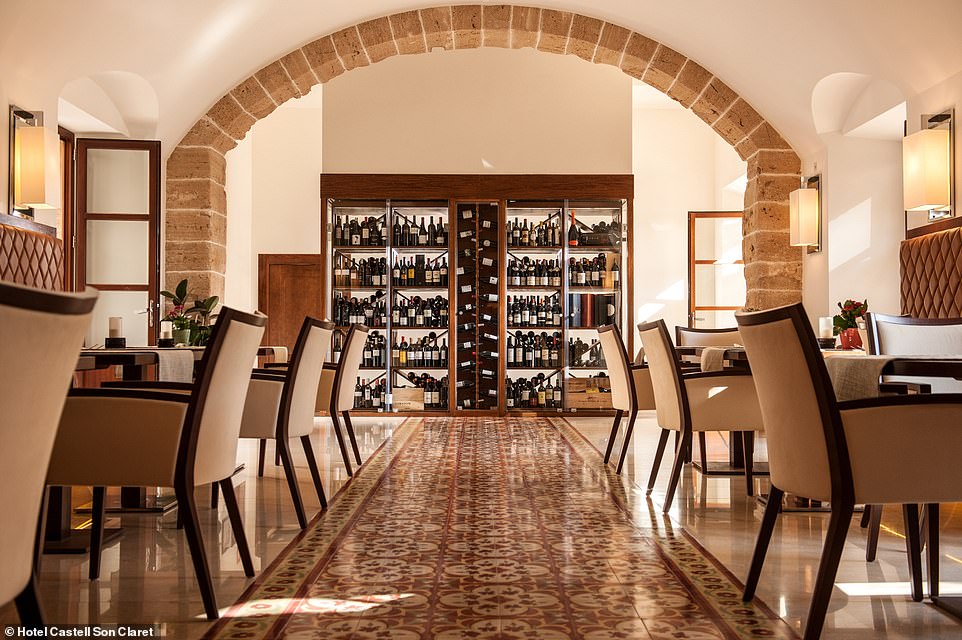 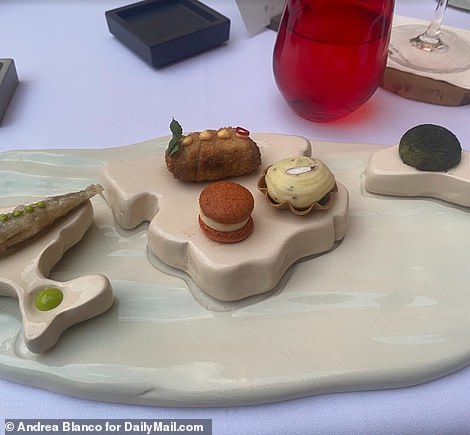 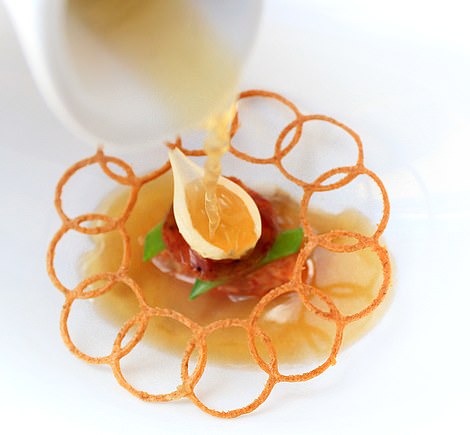 But it’s at the hotel’s fine-dining restaurant, Sa Clastra, where the food hits the highest gastronomic heights.

The Pigeon ‘a la royal’ took my taste buds on a journey of sensations as I cherished the unexpectedly exquisite blend of chocolate, strawberries, Mallorcan Palo [a sweet-bitter drink] and pigeon.

Committed to indulging in every pleasure Castell Son Claret had to offer, I surrendered to Emma’s magical hands as she pushed away the New York-fueled stress out of my grateful body at the hotel’s spa.

After my skin was treated to an energizing scrub and massage treatment with peppermint tea, tropical flowers and brown sugar, I took a quick shower and spent a few hours relaxing in the spa’s pool.

I left the hotel feeling renewed, with a boost of vitality and passion for life that had been bruised by the monotony of everyday living in a big city.

Is it the best hotel in Mallorca? Thanks to United, it’s now easier than ever for Americans to find out…

Andrea was hosted by Castell Son Claret, where rooms cost from around £400 ($480) a night.

United’s direct flights to Palma will be operating until September 22, 2022.

United customers in the US can book flights by visiting united.com or contacting United Reservations at 1-800-UNITED-1 (1-800-864-8331) or their travel agent.

Thanks to Rafa Velazquez for permission to publish his picture of Restaurante Sa Illeta.