A couple’s five-star ‘holiday of a lifetime’ turned out to be a ‘holiday from hell’ after they staying at ‘filthy’ hotels with moldy rooms and bedding stained with bodily fluids.

Nurse Lauren Jones, 37, and her partner Adam Donlevy, 36, booked the two-week getaway to Singapore and Bali with agent at the Broughton branch of Hays Travel – the largest independent travel agent in the UK – in September for £ 3,000.

The couple from Cheshire planned to kick their well-deserved holiday off on June 20 with a five night stay at a Singapore Hotel.

This was to be followed by 10 nights in Bali – five in cultural hotspot Ubud and five in beach resort Seminyak before heading home on July 5.

But the holiday turned into a nightmare for the couple during the first leg in Singapore, after arriving at the ‘five-star’ hotel she described as a ‘hellhole’.

‘It was meant to be the holiday of a lifetime and it was a hellhole. It was literally a holiday from hell, ‘said Nurse Lauren Jones (right), 37, about her trip to Singapore and Bali with her partner Adam Donlevy (left), 36 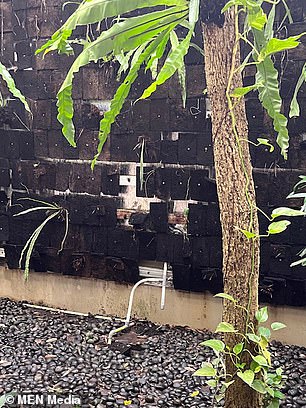 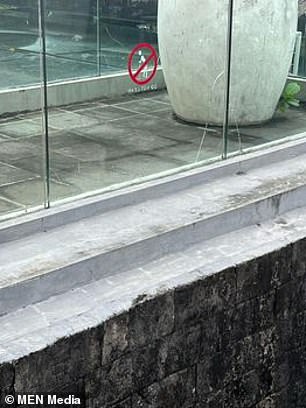 The holiday turned into a nightmare for the couple during the first leg in Singapore, after arriving at the ‘five-star’ hotel she described as a ‘hellhole’

Miss Jones said they left feeling ‘unwell’ due to mold and generally filthy rooms and ‘bodily fluid’ stains on the bedding.

‘It was just despair and anxiety. Despair at having to stay in such horrendous, dirty conditions and the anxiety of whether we were going to become unwell, ‘Miss Jones told CheshireLive.

‘We did both become unwell in those conditions, with stomach problems. But it’s also the fear you’re going to contract something else.

‘I’m a nurse, I know the things you can contract in those situations. As much as you can be careful by just using bottled water or that sort of thing, when the place itself is that dirty, you are bound to get ill which obviously we did.

‘It’s the anger as well – the anger and shock that we were placed in what should have been five star hotels that were nowhere near five stars. But also the anger towards Hays Travel for the way they treated us and how much I had to fight to get us moved to a safe and clean environment.

‘It was meant to be the holiday of a lifetime and it was a hellhole. It was literally a holiday from hell. ‘

Following their five-night stay in Singapore, the couple arrived at Sthala, a Tribute Portfolio Hotel in Ubud, Balie, on June 25.

They arrived late on that Saturday night, went to bed and then got up the next morning when Miss Jones said they noticed the room ‘smelled quite damp’. 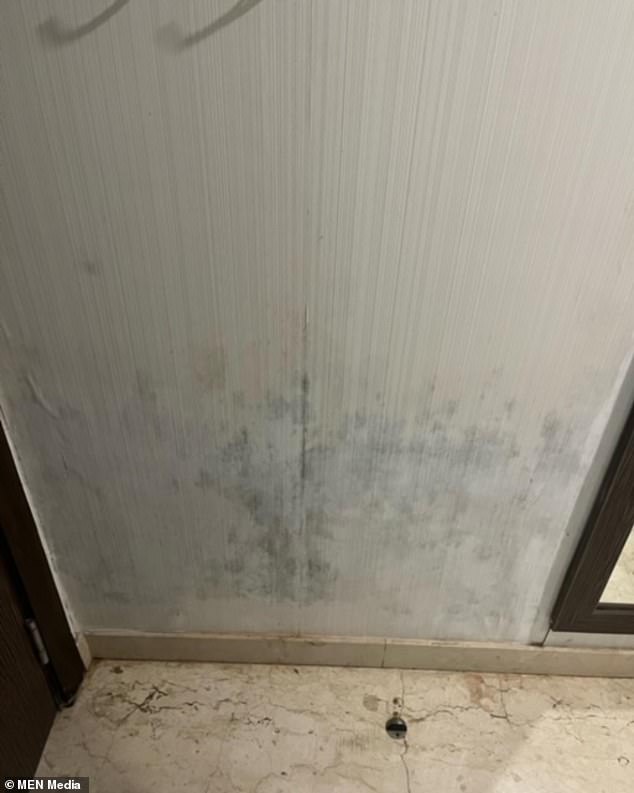 ‘It was just despair and anxiety. Despair at having to stay in such horrendous, dirty conditions and the anxiety of whether we were going to become unwell, ‘Miss Jones said 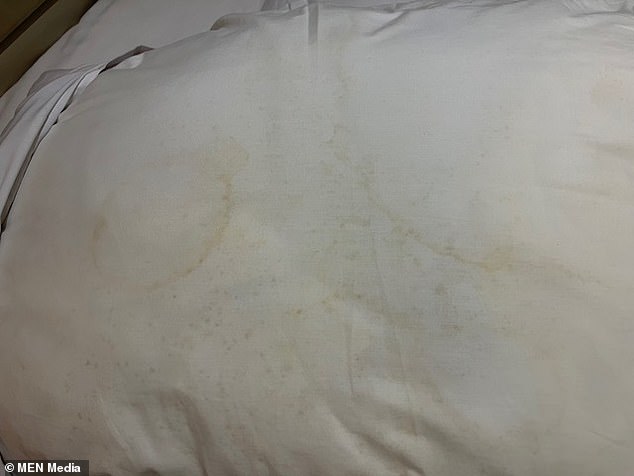 ‘We found the bodily fluids on the bedding and the towels’

She said: ‘We noticed that Adam’s coat had started developing mold on it when it had just been hanging up in the wardrobe. When we looked around the room, we found black mold going up half the walls.

‘We turned the cushions over on the outdoor seating part and they were covered in mold. There was just mold everywhere so we had to keep all our clothes in the suitcases.

‘We were unimpressed with the view. We looked out at what looked like a rotten fence wall with loads of equipment put out there, when we weren’t promised that. ‘

Miss Jones said she did not feel ‘safe’ and her and her partner were ‘constantly watching over our shoulders’, as she claimed she saw a lot of ‘crime’.

Her and Mr Donlevy contacted agents Hays Travel on the Tuesday, June 28, to complain about the hotel.

Miss Jones said she they asked why they hadn’t been in touch earlier but she explained they were both ‘shocked’ and ‘didn’t want to feel more uncomfortable’.

They went to their next hotel two days later on the Thursday, June 30, which was the Jambuluwuk Oceano Seminyak Hotel in Seminyak which was ’10 times worse ‘. 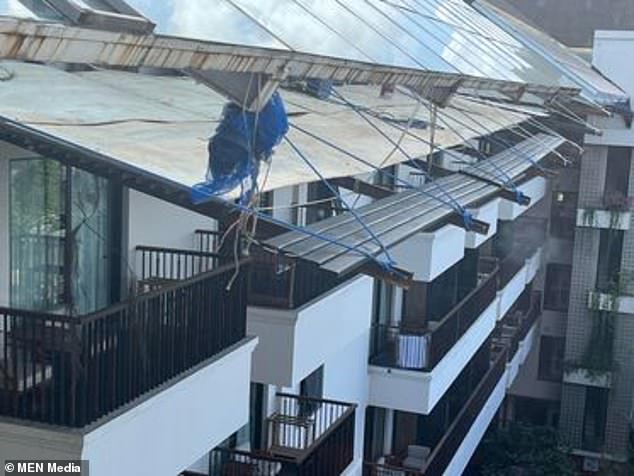 ‘We found the bodily fluids on the bedding and the towels. The pool was actually closed because the roof was falling down and held together with blue rope, ‘Miss Jones said of the Jambuluwuk Oceano Seminyak Hotel in Seminyak

‘We found the bodily fluids on the bedding and the towels. The pool was actually closed because the roof was falling down and held together with blue rope, ‘she said.

‘There’s a tiny pool at the top of the hotel, which was green, so you wouldn’t want to go in there. We couldn’t eat at the hotel because it was just that dirty, it was vile.

‘It wasn’t a safe place to be in at all and the bathroom was horrendously dirty. The hotel wasn’t fit to be open and it said on the sign that they were compliant with Covid-19 safety, which was a blatant lie. ‘

Miss Jones said that, following their stay at the first hotel in Bali, Hays Travel promised to move them to a new place ‘immediately’ if the second was just as bad. But she said they weren’t moved until Saturday, July 2, despite numerous attempts to contact the travel agency.

They were found a room at the Grand Hyatt Bali Hotel leaving the couple with just two full days of a ‘truly five star experience’ on their two week holiday.

They arrived home the following Tuesday, July 5, and filed a complaint with Hays Travel, asking for a refund.

Miss Jones said that as of Tuesday, July 12, she had not received a response from the travel agency.

However, Hays Travel have now said the couple have been offered a refund for their stays at both hotels plus an ‘additional goodwill gesture’.

The travel agency also said they would conduct an ‘urgent review’ and has put a ‘stop-sale’ on the two venues.

A spokesperson for Hays Travel said: ‘We were sorry to hear that Miss Jones and her partner were not satisfied with the hotels during their stay in Bali.

‘When Miss Jones made contact from her second hotel and asked to be moved we worked with our overseas supplier to find a suitable alternative which Miss Jones and her partner relocated to.

‘We have since passed the details of both properties to our product management team for urgent review and can confirm we have now put these hotels on stop sale.

‘The Broughton team have contacted Miss Jones to offer a refund of both hotels plus an additional goodwill gesture.’ 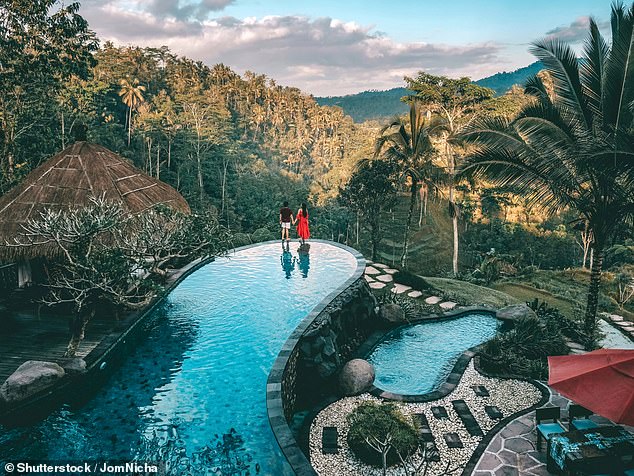 Miss Jones also wanted to warn people about online reviews of hotels that date back to before the pandemic.

She said: ‘A lot of hotels have been closed during the pandemic and the reviews that people are looking at are from when they were open, up and running and amazing.

‘The problem is, with a lot of them only just up and running now, many were left to go to ruin during a two-year period.’

She added: ‘People need to be looking at the reviews from the last few weeks and not basing anything on what you’re told by a travel agent from a review from two years ago when it was last open.

‘We only realized that when we got out there and saw how bad things were.’