Last week, reports circulated as photos of Armie Hammer surfaced on social media and in the tabloids. The photos in question appeared to showcase the actor — who was all but ousted from Hollywood after being hit with a series of sexual abuse allegations — working at a hotel resort in the Cayman Islands.

Initially, a flyer made the rounds on social media stating that Hammer was working as a hotel concierge. The hotel told various media outlets, including Variety, that Hammer was not on their staff. But then photos were published of Hammer appearing to be dressed in uniform, working at the resort.

Now, a source tells Variety that Hammer is indeed working selling timeshares at a hotel in the Caymans, and that all other reports suggesting otherwise are inaccurate.

“He is working at the resort and selling timeshares. He is working at a cubicle,” a source, who called Variety this week, explain. “The reality is he’s totally broke, and is trying to fill the days and earn money to support his family.”

This individual, who asked to remain anonymous, says that prior to working as a timeshare salesman, Hammer was managing an apartment complex in the Cayman Islands. He is living there so he can be near his two young children who have been residing in the Caymans with his ex-wife, TV host and entrepreneur Elizabeth Chambers. A source previously told Variety that Hammer had also spent time in recovery at a treatment facility after his career downfall.

Hammer — who starred in “The Social Network,” “Call Me By Your Name” and most recently, Disney’s “Death on the Nile” — is the great-grandson of oil tycoon Armand Hammer. Despite his family lineage, the source explains that he is not on the family payroll, and needs to work a normal and respectable job to earn money, since he is not getting work in Hollywood. Last year, after he was accused online of sexual abuse and improper behavior by numerous women, Hammer was dropped by his agency, WME, and was fired from a plethora of projects, including Jennifer Lopez’s “Shotgun Wedding,” the thriller “Billion Dollar Spy ,” the Broadway play, “The Minutes” and the Paramount Plus series “The Offer,” in which Miles Teller took over his role.

Last week, rumors began when a flyer made the rounds on social media, depicting Hammer as a concierge employed at Morritt’s Resort in Grand Cayman. The flyer, which was shared (and later deleted) by the verified Twitter account of Muna Mirea producer on Showtime’s “Desus & Mero,” included a photo of the actor.

At that time, Variety reported that Hammer was not working as a hotel concierge when an employee at the resort said that the flyer boiled down to a prank: Hammer was a guest of the hotel and had just been golfing with some of the hotel staff with whom he had become friendly. The hotel employee told Variety that the staff Hammer was golfing with made the flyer and sent it to a few rooms at the resort to try to see what kind of attention it might get. “I could only dream of this kind of publicity,” the hotel staff said on the phone one week ago. When reached for comment at that time, Hammer’s attorney, Andrew Brettler, also said that the flyer was fake.

Then, when photos of Hammer working as a timeshare salesman surfaced on TMZ over this past weekend, an employee at the Morritt’s Resort was adamant that Hammer is not employed at the resort, although they indicated that he “hangs around” the location sometimes.

Now, this source says that the hotel was trying to protect Hammer — who is, in fact, working a job selling timeshares. 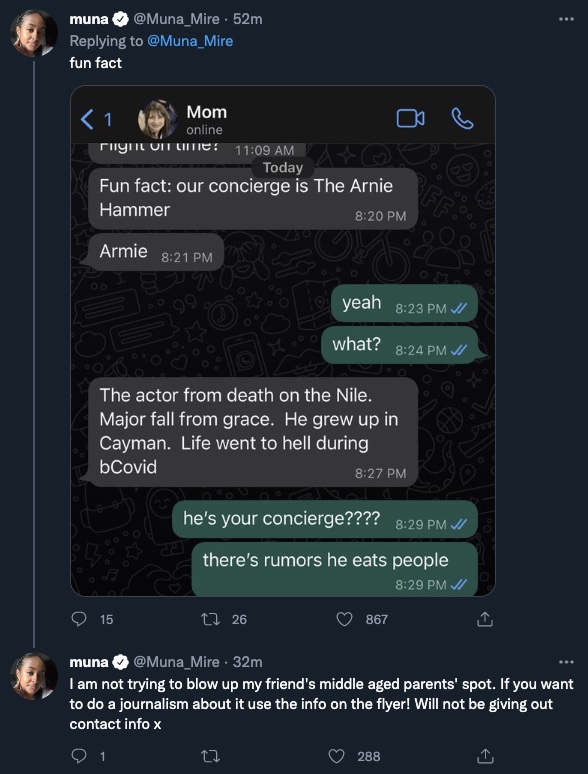 In early 2021, screenshots of messages from women began to surface on social media, appearing to depict Hammer as having cannibalistic fetishes. What started out as a punchline snowballed into a media firestorm that didn’t die down — particularly as more serious allegations came forth, including a rape accusation from a woman who came forward with her attorney Gloria Allred, which led to an LAPD investigation that has since concluded.

Hammer, who was married at the time of many of the alleged incidents, has strongly denied the rape claim and all other accusations, stating that any interactions with any women were consensual. In an effort to discredit the allegations, his legal team provided the media with text messages with the woman who accused him of rape. Despite his denial, Hammer’s public reputation was severely damaged.

Hammer was last seen in Disney’s “Death on the Nile” earlier this year, but did not do any press for that film, which completed production before his scandal exploded. Hammer has no other projects lined up.

Editor’s Note: This story was originally published on July 6 and was updated on July 13 with new information.