OAKLAND, Calif. – A regular customer at an Oakland 7-Eleven convenience store discovered a credit card skimmer Sunday as he attempted to make a purchase.

The store at 3500 Grand Ave. in the Grand Lake neighborhood is yet another target of scammers who aim to get personal information and steal credit or debit card numbers.

“I was going to enter my PIN and the buttons were the biggest giveaway,” said David Dinar who frequents the 7-Eleven store. “I stopped and removed my card because something instantly clicked that something’s not right here.”

Skimming devices are placed over stores’ card readers and fitted with a machine that records all of the information read from a card’s magnetic strip or chip.

Dinar said the buttons on the skimmer he found looked and felt differently.

“They felt squishy and I looked really closely, and it didn’t look the same as the other one at the other register,” he said. “I kind of just picked at it and slow but sure enough… it came off.”

Dinar said he took pictures and alerted 7-Eleven employees who reported it to managers. He also contacted his bank di lui and canceled his card to prevent fraud.

“The skimmer – it fit on like a phone case, so it’s snug and you kind of don’t really recognize it unless you pay attention,” he said.

Skimmer has a recorder that is able to steal personal information found in a card’s magnetic strip or chip.

Oakland Police told KTVU it did not receive any calls from the 7-Eleven store over the found skimmer, and said it was not aware of reports filed in recent days regarding potential skimming devices in the city.

But Petaluma Police warned Monday that four skimming devices were found at businesses including 7-Eleven stores and Bank of America. They were used to steal ATM and credit card information, according to investigators.

Dinar also posted to his social networks about what he found to warn others in hopes of preventing anyone from falling victim to scammers.

7-Eleven did not immediately respond to a request for comment following these recent skimmer discoveries.

“I was shocked that I actually came across something like this,” Dinar said. “You hear about these stories but you never think you’ll be the one to catch it. I was actually shocked at myself that I thought to inspect further.” 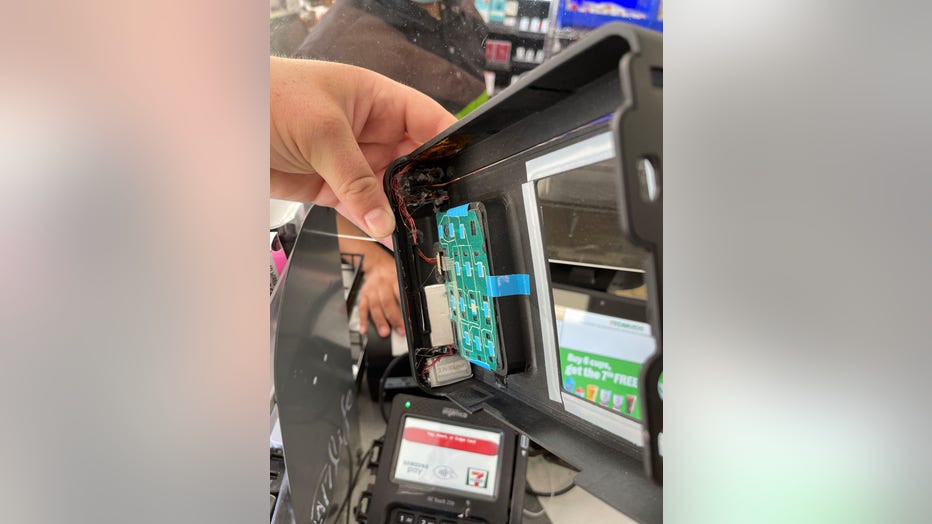