Shires horses and dressage don’t traditionally mix, but over recent years, more and more people have seen the potential Shire horses have as riding and sport horses. Shires and part-bred Shires are beginning to pop up across the disciplines, excelling everywhere from the show ring to the hunting field, as well as the dressage arena. Here are some of the Shire horses competing successfully in dressage to look out for…

A pure-bred Shire probably wouldn’t be what most people think of when they imagine a fantastic para dressage horse, but Roughcote Jupiter is turning out to be an exciting international prospect for grade II Paralympic multi-medallist Lee Pearson.

“His head is as big as my torso and he’s a bit like a whale when he looks at me with his little eye,” Lee has said of Elizabeth Green’s eight-year-old gelding who stands 18.1hh. “But his strengths are his constant engagement, his laid-back attitude and his willingness to learn.”

The pair claimed three seconds at the Keysoe international in March and have scored almost 75% in the short time they have been together.

This 15-year-old part-bred Shire horse has competed up to prix st georges level dressage with rider Alice Elliott. He has been extremely successful at medium and advanced medium levels in particular; the pair have won their past 11 British Dressage tests, with several scores over 70%, and Alice describes him as “very honest and genuine”.

“He was bred at Chatsworth House in the farmyard complex, because they had a Shire mare,” explains Alice, who bought the 15-year-old gelding a decade ago. “This time she happened to be put to a grand prix stallion, Longdean Westminster.

“He was a bit of a lad as a youngster and quite sharp, but we now call him Mr Consistent as he tends to get a good score every time out,” she added of “Big Murph.”

This veteran may be 21, but is still flying the flag for Shire horses and part-breds in dressage. The Shire/thoroughbred gelding claimed the inter I bronze title at Beacons Equestrian Area Festival earlier this year and had previously competed up to a grand prix.

His rider, Samantha Fish, bought Mac as a four-year-old, and describes him as having plenty of “movement and power”.

“I have three Shire crosses and they have such grace about them,” added Samantha. “They’re so athletic and light on their feet.”

Part-bred Shire gelding “Fabio”, who was bred in Wales, has caused a stir on the international grand prix scene over the past few years, helping Ireland to a historic Olympic team qualification at the European Championships in 2019 with Kate Dwyer. The pair went on to win the grand prix special at the Al Shaqab CHI5* in 2020, becoming the first Irish combination ever to win a five-star grand prix special. Not bad for a chunky gelding with “feet like dinner plates”, according to Kate.

“Because he is big and heavy-set people think I have to kick him along, but he’s actually hypersensitive. Right from the start of his career, his work has always been rhythmical, harmonious and sweet,” she has said.

“I always used to joke that he could go off and plow a field after our test!” 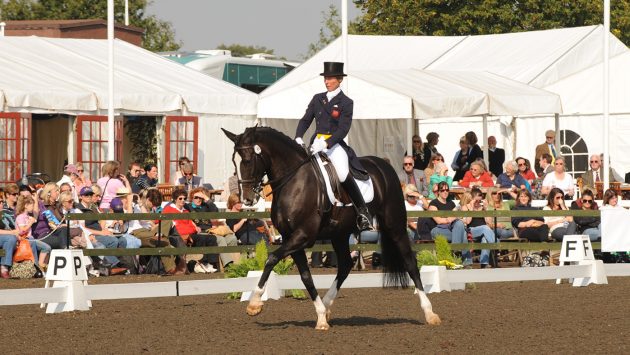 This pair may not be competing in dressage today, but no list of successful Shires is complete without British Olympic dressage rider’s Carol Parsons’ two part-bred Shires, Walter and Giddy (pictured). Carol trained both of them all the way to grand prix, competing internationally with them. Walter finished fifth in the grand prix and freestyle at the Hickstead CDI in 2004, while Giddy was second at the nationals in 2005 and 2006 and then became the Hickstead Dressage Masters Champion in 2008.

‘The Shire temprament has definitely stuck through the generations, too. They’re such placid and trainable horses…’

One of the lesser known Baroque breeds, this 11-year-old stallion is thought to be the only Murgese horse to reach

Horse & Hound magazine, out every Thursday, is packed with all the latest news and reports, as well as interviews, specials, nostalgia, vet and training advice. Find how you can enjoy the magazine delivered to your door every week, plus options to upgrade your subscription to access our online service that brings you breaking news and reports as well as other benefits.