Baaeed dazzles in the Lockinge

Lockinge day is no stranger to hosting champions and William Haggas, who has lived and breathed the game for much of his life, might have one on his hands in the brilliant Baaeed, the potential star of the 2022 Flat season who captured the Al Shaqab- sponsored main event in a manner that suggested he will soon stamp his name all over the sport.

The unbeaten four-year-old, from a superb Shadwell family that goes back to the 1980s when the outfit’s late supremo Hamdan Al Maktoum purchased Height Of Fashion from the Queen, had risen to the top last season with Group 1 triumphs in the Prix du Moulin and Queen Elizabeth II Stakes, and he started the new campaign with a huge bang.

Sent off the 4-9 favorite for Newbury’s most important flat race, he tracked the leaders before making a smooth headway two furlongs out and, as he unleashed Baaeed’s turn of foot, jockey Jim Crowley hardly had a bead of sweat on him despite the soaring temperatures on and off the track in West Berkshire.

Three and a quarter lengths was the official winning margin from Godolphin’s classy Real World, with Chindit running a blinder to be third, but Baaeed won with a tonne in hand to ease Haggas’s understandable pre-race nerves.

Asked if he had ever felt more nervous before a race, Haggas said: “Not really, no. There was a bit of pressure because people kept saying and writing nice things about him, but he did it nicely, as he should have done.

“I wouldn’t go as far as to say he’s the best horse in the world – it’s not the sort of thing I’d say – but he’s done very well and it was a strong field.”

Haggas, whose father-in-law Lester Piggott is the jockey all others before and since are measured against, started training in 1987 and has a Derby on his CV, while the sublime Sea Of Class came close to giving him a famous victory in the Prix ​​de l’Arc de Triomphe.

“I don’t know if he’s the best I’ve trained. Sea Of Class was a star and I loved her dearly, and most horses with a good turn of foot are good and he’s got a nice turn of foot which she had too .

“I was impressed and think he’s a good horse.”

The 61-year-old is far too immediately wily to say something that might come back to haunt him, instead of keeping grounded as he described a horse with a great temperament who was “brilliantly” behaved before and during the Lockinge.

However, Haggas was the one who brought up the exceptional Frankel when pondering a step up in trip for Baaeed.

“I just want to go and win all the races he runs in,” added the trainer, whose stable star is bound for the Queen Anne at Royal Ascot next and is set to step up in trip later in the season in York’s Juddmonte International.

“It would be a shame not to try going further. Everyone said about Frankel staying at a mile, but arguably he was at his most imperious when going round in the Juddmonte.”

The F word was also not far from Angus Gold’s thoughts.

Shadwell’s long-serving racing manager, at the Queen’s Sandringham stud when Height Of Fashion was sold to his future employer, described Baaed as being the commercial cornerstone of the operation as a stallion.

“He is and could be a massive asset, but I’m not going to say he’s in that class yet because Frankel is the best I’ve ever seen, although he’s heading in that direction.

“I don’t want to sound cocky, but I was at Chelmsford the other day when he worked with Montatham, who is rated 104, and Aldaary, who is a pretty good horse, and he went by them easily. When you see something like that, you obviously hope.” 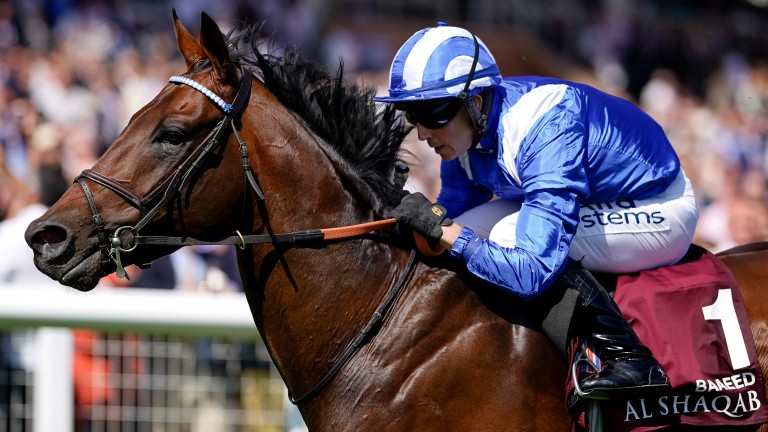 Baaeed: put in a five-star performance on his return in the Lockinge

Crowley also referenced that part of the preparation, which might enter racing folklore when it comes to sparkling gallops.

“I was speechless at Chelmsford,” he purred. “The race went perfectly and was like a bit of work as well.

“He’s very exciting and it’s unfortunate Sheikh Hamdan isn’t here as he’s spent a lifetime trying to breed a horse like this.”

Haggas had breeding of a different kind on his mind as he explained the absence of wife Maureen – an integral part of Somerville Lodge – from his side.

“Maureen is in Dubai where our daughter’s waters have broken, so we could be grandparents again soon,” said the Newmarket trainer, who had more than one reason to be bursting with pride – and he was, understandably so as well.