Ed. note: This first article appeared on ARC2020.eu. ARC2020 is a platform for agri-food and rural actors working towards better food, farming, and rural policies for Europe.

Meet Claire Jeannerat, who runs a sheep and goat farm with her family in the Swiss Alps.

The title of shepherdess is something she holds dear to her heart with pride as it’s a true and often humbling apprenticeship with mother nature and all the uncertainties.

For both Claire and her husband, shepherding in the mountains is a lifestyle choice rather than a career. They endeavor to live this vocation in a manner that respects and upholds ancient traditions that are being lost in modern society, bridging a path between the old and new.

My name is Claire Jeannerat, I am 41 years old, English by birth. I have been living in Switzerland for the last 21 years with my husband (Damien) and 3 children (Isaac, Amelie and Leo). We are a farming family.

Our farm, La Bergerie de Naye is a small alpine farm nestled in the Swiss Alps in the canton of Valais. We have 480 sheep, 120 goats, 3 cows, 4 horses, 2 ponies, 5 livestock guardian dogs and 2 working border collies. Surrounded by forest, the farm is tucked away from the village. Thus when there, it feels like time standing still. You are in a world apart. This feeling is a running theme throughout our way of farming. A way of life that takes farming back to its origins. 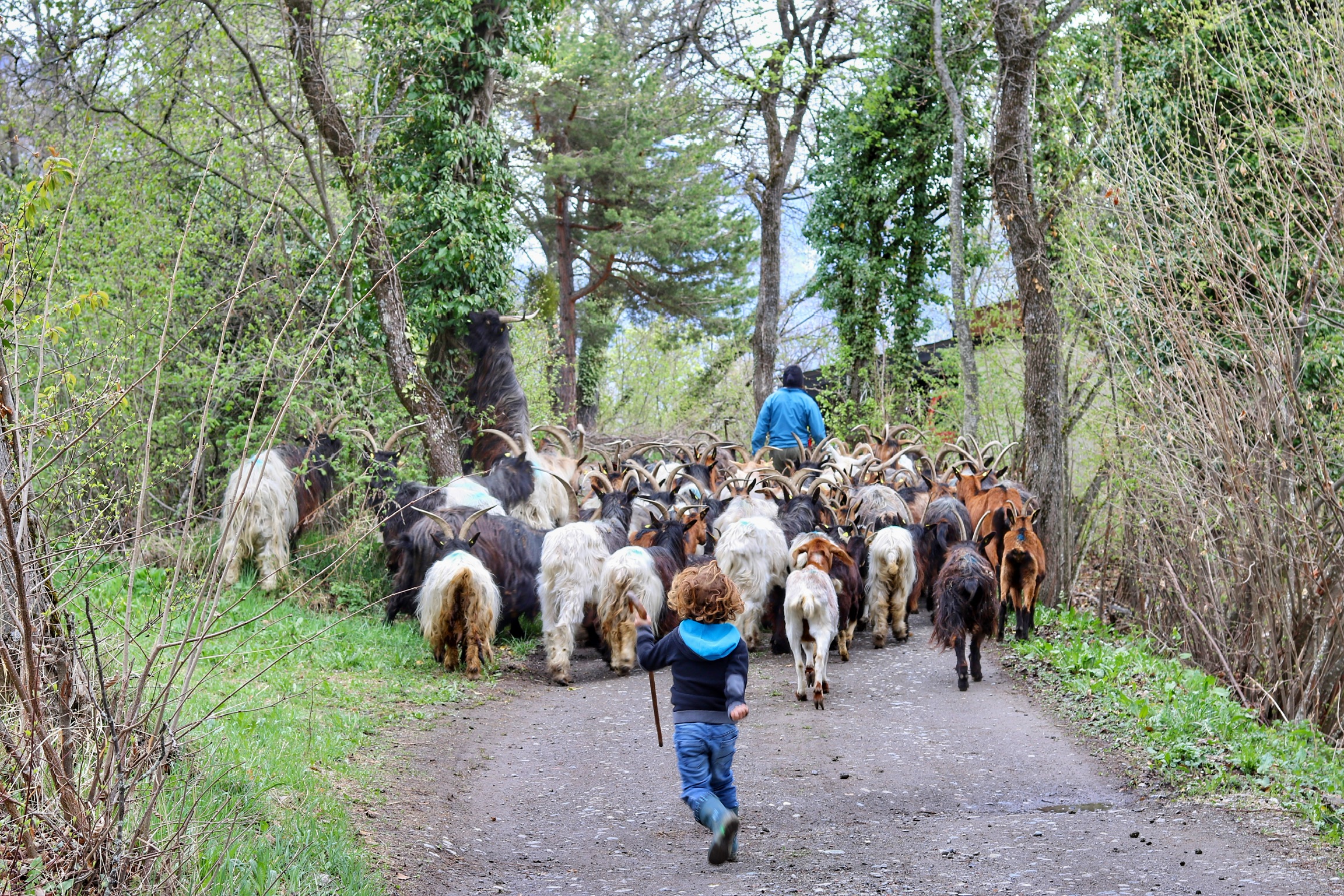 Mountain farming has similarities that can be found in agriculture around the world, yet at the same time its own very distinctive way of operating. We own 4 hectares of land around our farm. However we cultivate 320 hectares (30 hectares of land we use for hay making, 40 hectares for grazing in the lower ground around the villages, and 250 hectares of alpage – which is the highest mountain grazing specifically used in the summer months).

First generation farmers, we are also one of the few goat and sheep farmers in the region in which we live. In French we are what are called “Eleveur et Berger” which literally translated is “Breeder and Shepherd”. This gives you a hint at the differences of mountain farming. Traditionally our farmers were pretty much Eleveur & Berger but nowadays these two titles have become two separate roles and even vocations. 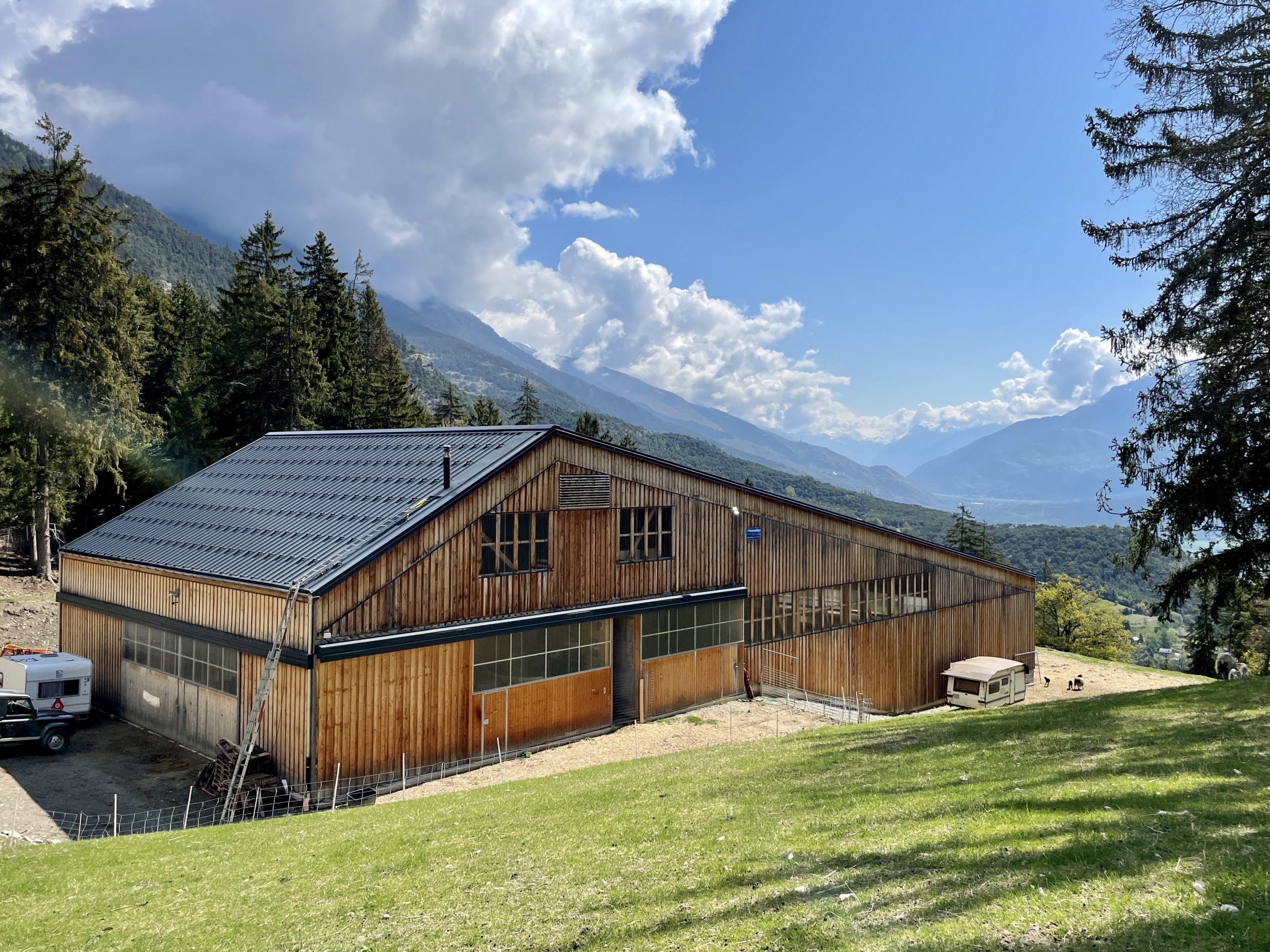 Our year on the farm

I will clarify these two roles but first let me give you an insight into the agricultural year of a mountain farmer. Living in the mountains, our year is wholly dictated by the seasons. Weather is everything! This is the case for most farmers but ours is on a more extreme basis as we have 4 very distinct seasons. Each season necessitates and incorporates different practices.

From December to March we have heavy snow, so the animals have to be housed in shelter at the farm during these months. We lamb/kid in winter so that come spring, the lambs and kids are of an age where they are strong enough to follow on the journeys that lie ahead. These are the only months that the animals are actually on the farm, the rest of the year ours is a nomadic existence, constantly moving on the hunt for green gold (fresh grass). 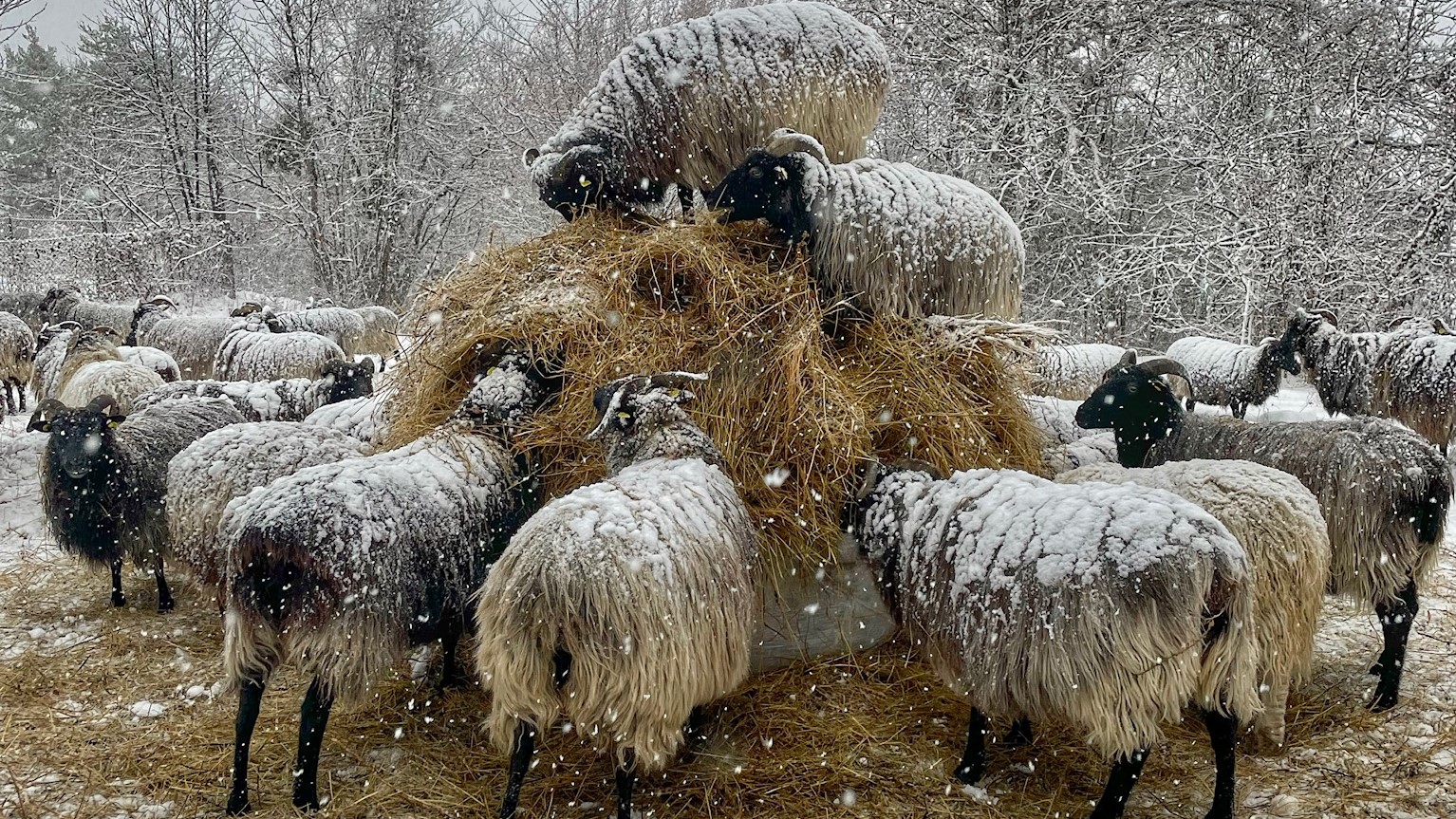 We have heavy snow, so the animals have to be housed in shelter at the farm from December to March

By April the snow has generally melted at the lower grazing level, and thus in the months of April/May we can start to move the animals onto the pastures around villages. We will return once again to these pastures in November and December, eating up the last of the graze that has grown over the summer until the first snow arrives.

Grazing around the village often means that the animals are located near residential areas – housing, people, roads… These are our biggest difficulty during this period. We move all of our animals on foot, sometimes a number of kilometers in a day, to follow a patchwork of grass stretching across and up the mountain side.

Negotiating the constraints of the modern world while staying true to our desire and need to embrace the old traditions, is indeed a challenge. There is a real sense of bridging worlds old and new when moving the goats or sheep around these areas. What we do, how we operate is still so very basic in comparison to the world in which we function. 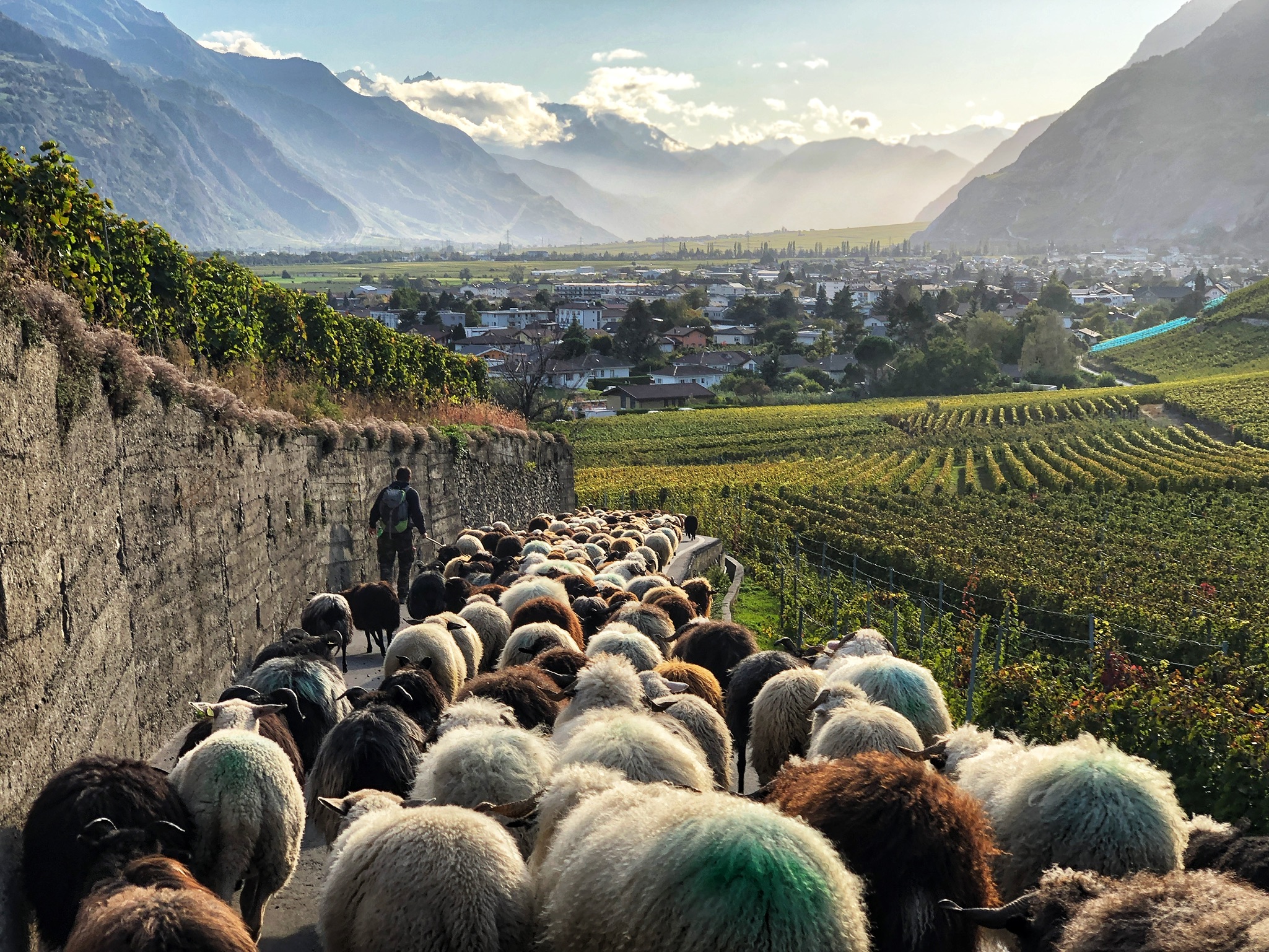 Negotiating the constraints of the modern world while staying true to our desire and need to embrace the old traditions, is indeed a challenge

In June we walk the flock/herd to the alpage (this is transhumance – the moving of animals by foot across regions and during a number of days). We do the same return journey back to the village grazing in November. The alpage is the highest mountain grazing where the animals roam free and eat the best grass, full of mountain flowers. It is the prized moment of the year, the time where animals can flourish and gain the form they need for the rest of the year. The beauty of alpage grazing is the wide open spaces, simple living and breathtaking panoramas, instantly making the hard work worth it. 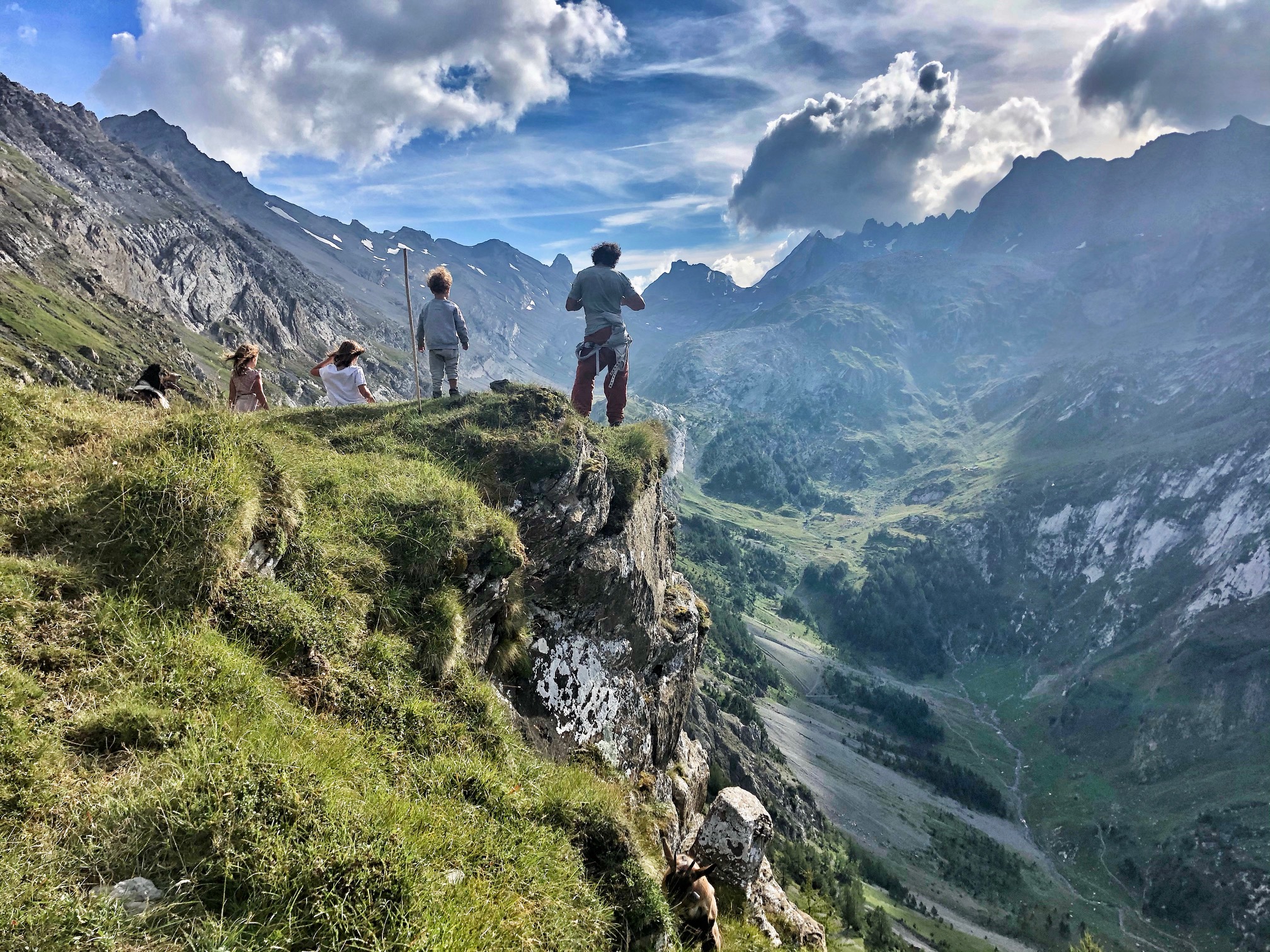 The beauty of alpage grazing is the wide open spaces, simple living and breathtaking panoramas, instantly making the hard work worth it

Shepherds as well as breeders

We remain permanently with the animals during the summer months, living on the alpage. This is what makes us shepherds as well as breeders. We own our animals (the classification of being a breeder) and we also take care of them on the alpage during the summer months (the job of a shepherd), which nowadays is relatively uncommon. Many farmers (breeders) employ a shepherd to watch over their flock during the alpage period as this is also the time to make hay. Often farmers will stay in the lower grazing to make the hay and employ a shepherd on the alpage to watch over the flock. Thus the shepherd owns no animals of their own but is a caretaker over the summer.

The flock needs constant supervision because of risks from predators, to make sure the animals don’t stray and to manage the logistics and interactions around the cohabitation of mountain farming with alpine tourism. Normally this is my husband’s role, he lives with the flock. But I replace him from time to time so he can come back to make hay and do other jobs. A considerable amount of our haymaking is also done on foot as the lay of the land dictates that using a vehicle would impractical and quite simply just too dangerous. 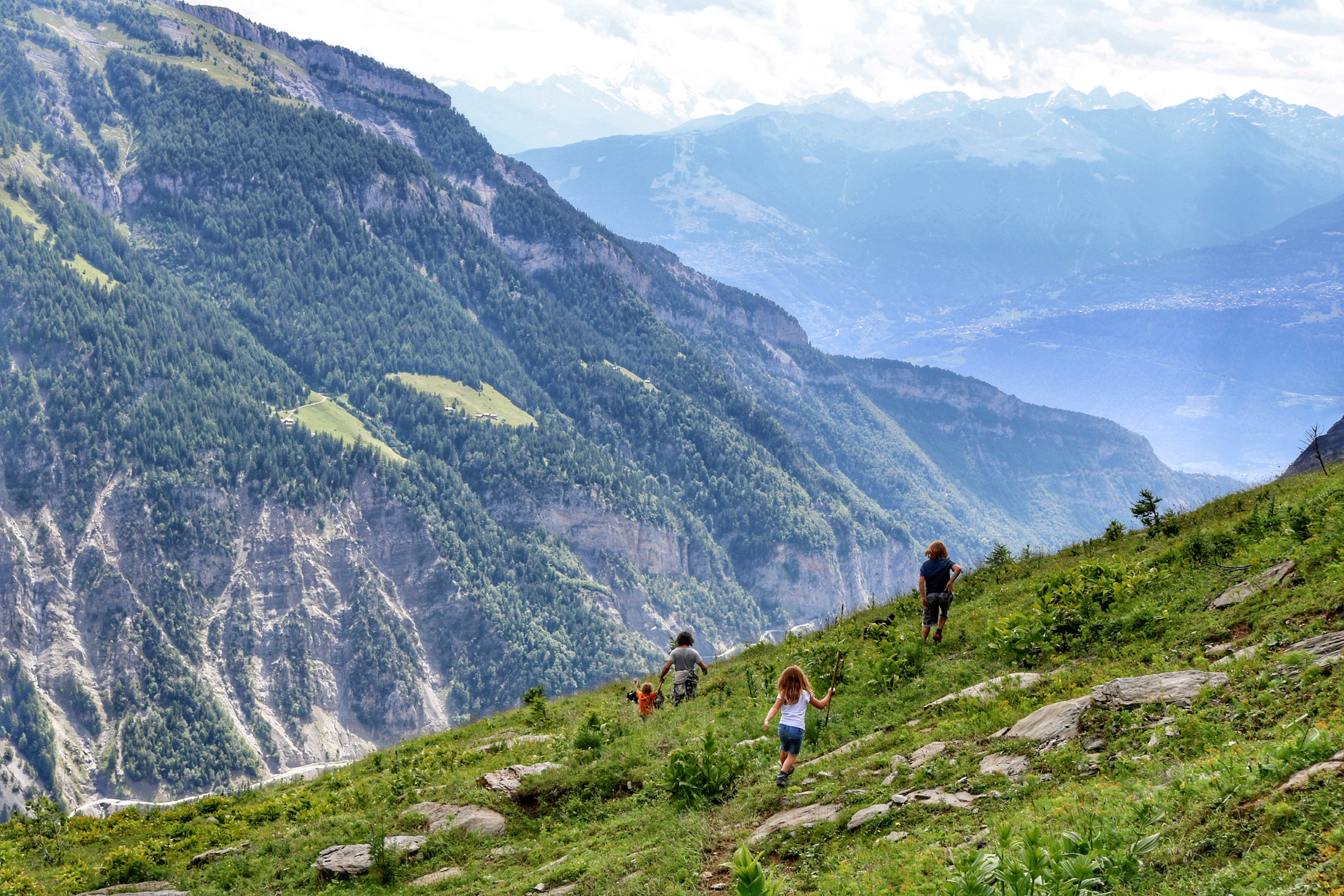 When we can, the kids and I go and stay with Damien on the alpage

For most of the months from mid-June to November we are living apart as a family, my husband on the alpage and the children and I at home (because of the constraints of school and other obligations). When we can, the kids and I go and stay with Damien on the alpage. It is truly a special experience living in nature in a far more basic and simply manner (we have no electricity or mod cons). Standing on the alpage, walking the same paths that were used by countless generations before, you get a real sense of keeping the local heritage alive. 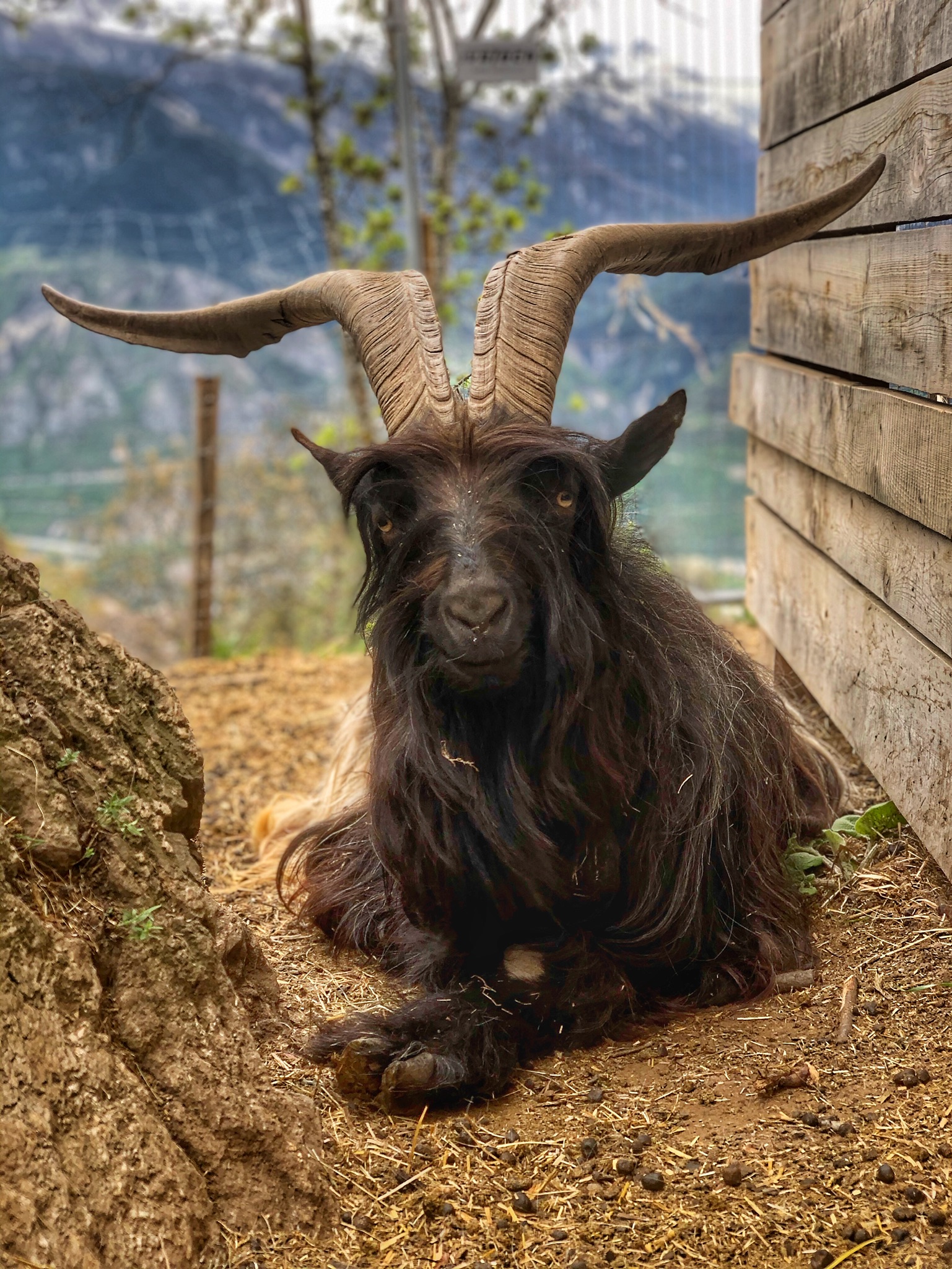 We choose to work with rare local breeds such as Valais Blackneck goats, as they are equipped to thrive in the mountains

We choose to work with these breeds as they are equipped to thrive in the mountains and with this lifestyle – such as moving on foot, the ability to cope with tough terrain and conditions, and they are skilled foragers. What is really interesting about these breeds is that once on the alpage, they graze as a group, and are less likely to stray. This makes it easier for the shepherd to manage the flock (as the animals are completely free, with no fencing). 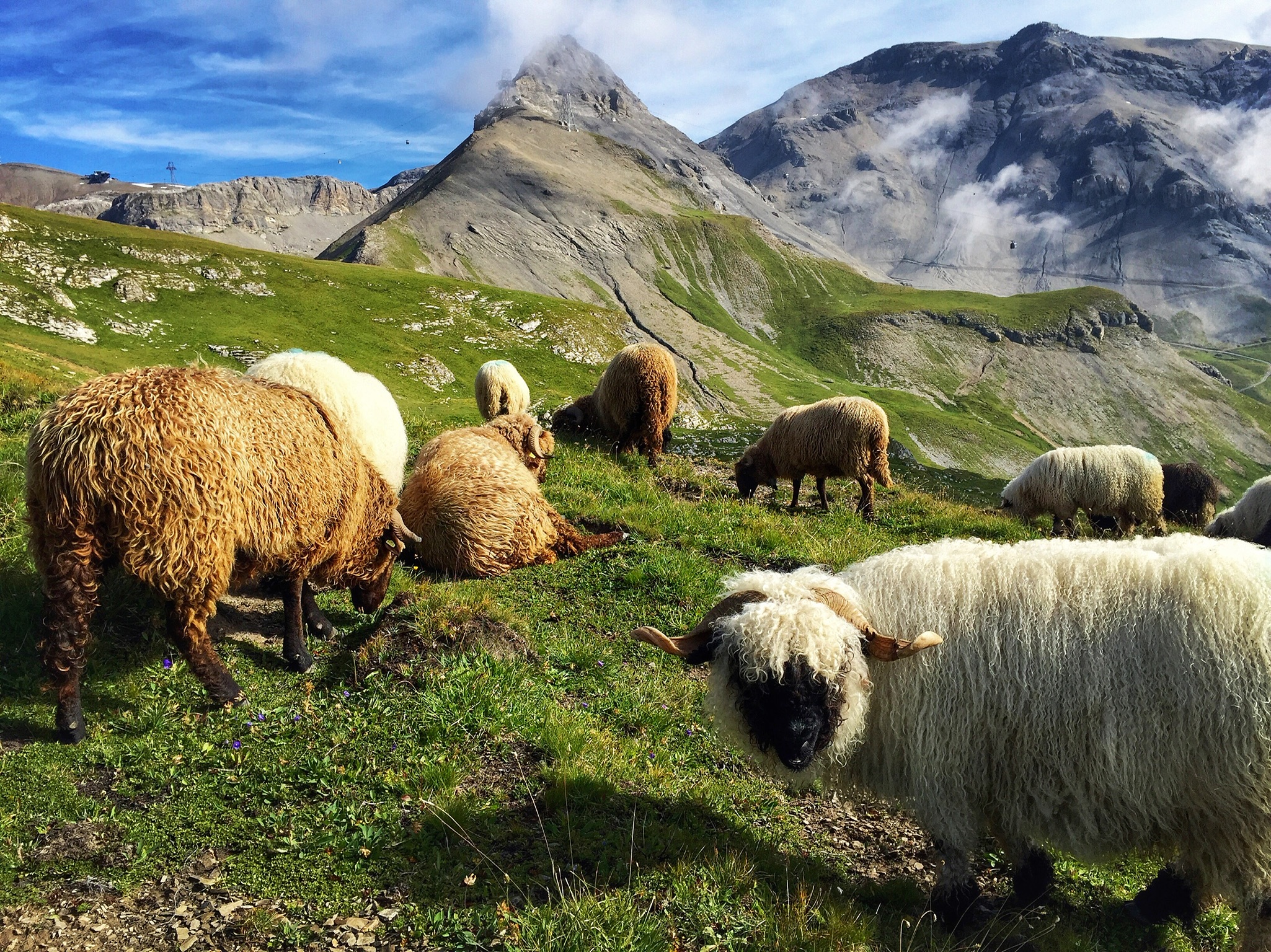 Once on the alpage, these rare local breeds graze as a group, and are less likely to stray. This makes it easier for the shepherd to manage the flock as the animals are completely free, with no fencing 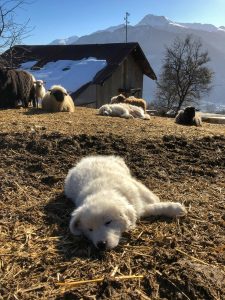 Livestock guardian dogs are a vital tool for shepherds

In terms of predation this is also better for the shepherd, his team and his flock. By his team, I mean the pack of livestock guardian dogs we have. Their role is to watch over and protect the sheep. This is done in a mostly preventative role. The dogs will take up a variety of positions around the alpage keeping a watch out. If they hear, sense or smell danger they will bark to ward off any predators and alert the rest of the pack.

In Switzerland predators can be foxes, wolves, bears, golden eagles, and lynx, as well as errant dogs. The wolf population continues to grow, and more and more farmers are having to protect their animals from attacks. Livestock guardian dogs are a recommended and approved method (by the Swiss authorities) for prevention against predators. Most attacks happen during the summer on the alpage thus the livestock guardian dogs are a vital tool for the shepherds. 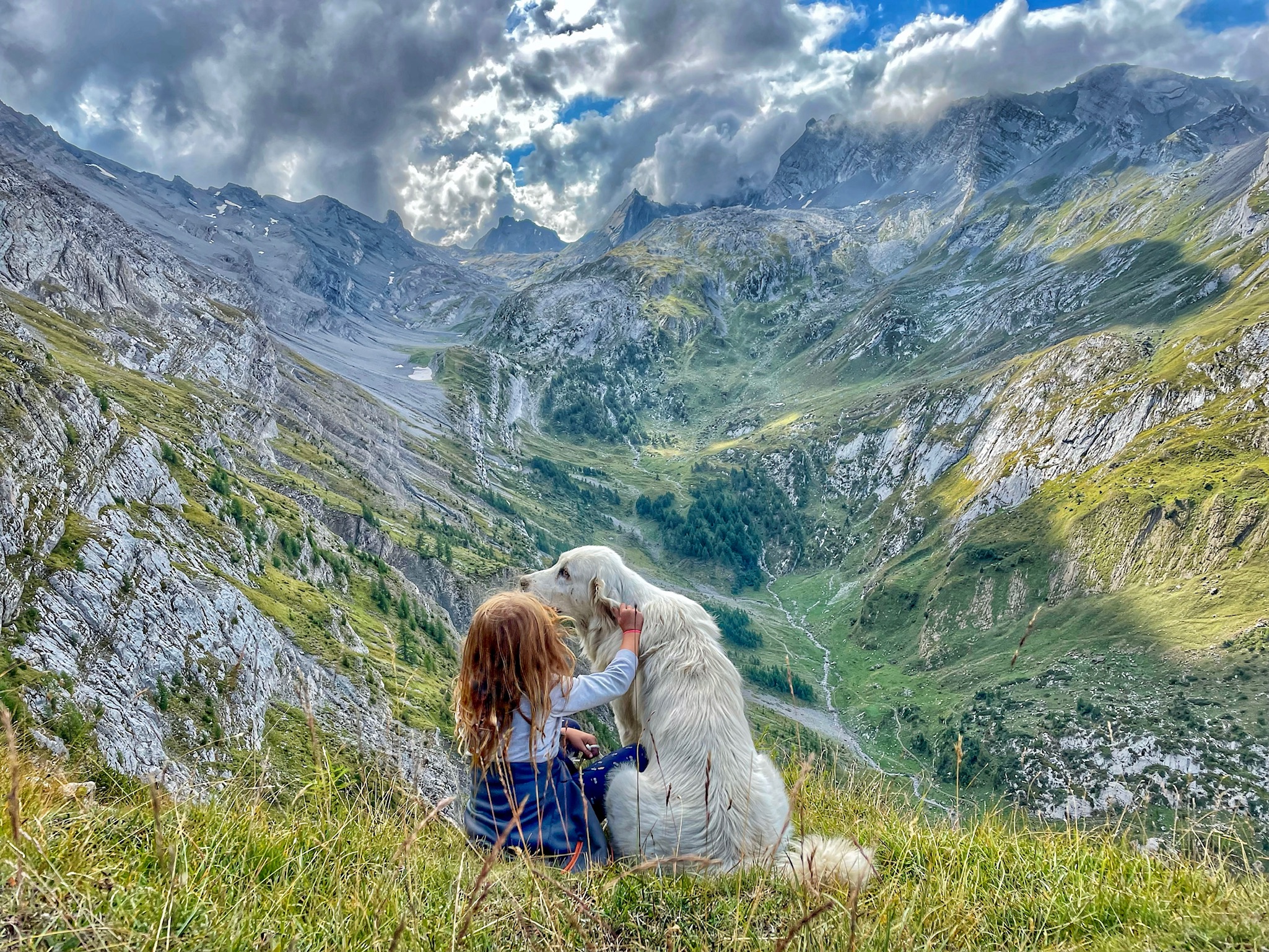 How we farm demands a certain amount of sacrifices, understanding and work from kids and parents alike

As a family, how we farm is tough for us all. It demands a certain amount of sacrifices, understanding and work from kids and parents alike. interactive, as a mother, I am truly grateful for the life lessons it provides our children. The reward for their efforts; the possibility to experience things and see places that very few other children of their age will ever get the chance to do.