Many home gardeners might dream of having acres of growing space, but there’s a lot you can do with just a few square feet. Make the most out of a smaller garden by planting climbing vegetables that grow on a trellis or post. These plants are perfect for container gardening and grow a large amount of food in a limited area. These dozen climbing vegetable plants make the perfect addition to any edible garden. 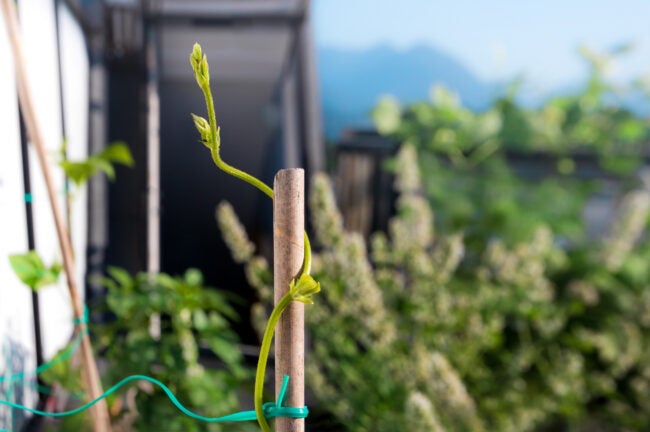 String veggies like pole beans are popularly planted as a climbing vegetable because they’re easy to maintain and yield a long harvest. They can be eaten fresh in salads or added to soups, stews and other cooked dishes. Pole bean plants need a strong support structure to climb on. Some gardeners opt for a teepee-style structure made of bamboo stakes, while others use wire fencing as DIY trellises for climbing plants. 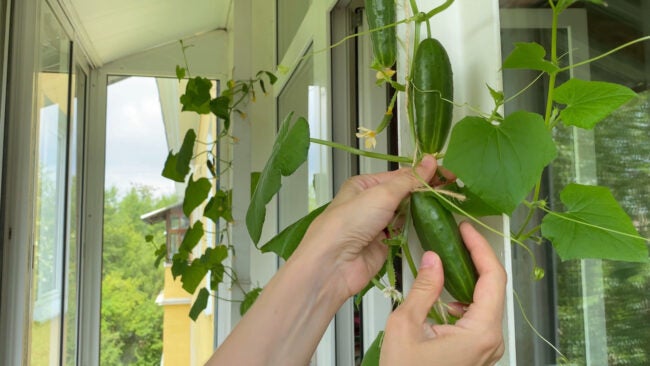 Climbing cucumbers make an excellent addition to any vertical garden. They’re delicious when eaten straight from the vine and act as a perfect salad ingredient. It’s important to note that not all cucumbers are bred to grow vertically; There are many bush varieties that grow horizontally instead. Be sure to choose a winning variety when purchasing cucumber seeds or seedlings. The vines of these plants will produce tendrils that will naturally attach themselves to supports. 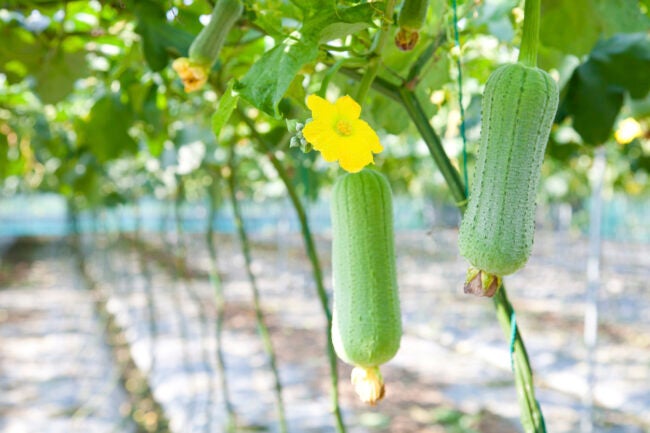 The loofah plant is best known for its usefulness as a natural scrubbing tool. When harvested early in the growing cycle, though, it can actually be edible, making it a popular ingredient in Indian, Vietnamese and Chinese cuisine. Loofah can be consumed either cooked or raw, much like its relative, the cucumber. The plant thrives best on stable trellises in warm climates. Even if you live further north than loofah’s ideal hardiness zone, you can first grow it in a container indoors before transplanting it outside. 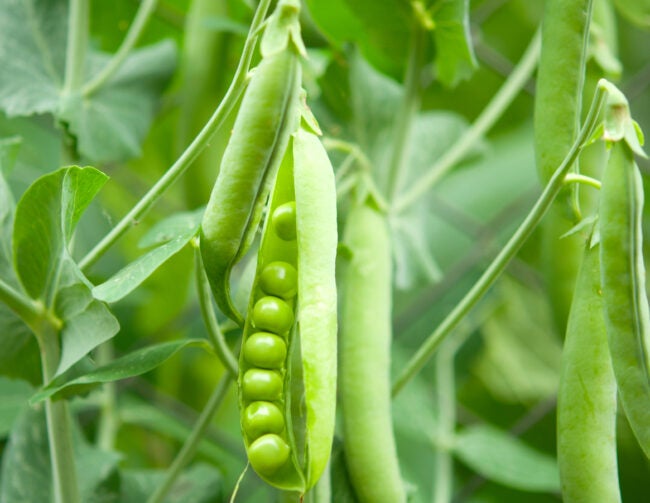 Peas are a cool-weather crop that gardeners can plant as soon as the soil can be worked in early spring. Even if you miss that spring window, you can still plant them in late summer for a fall harvest. Once mature, pea plant vines grow quite heavy and require a sturdy support structure. Peas keep well in the freezer after harvest and are a great choice for winter storage. 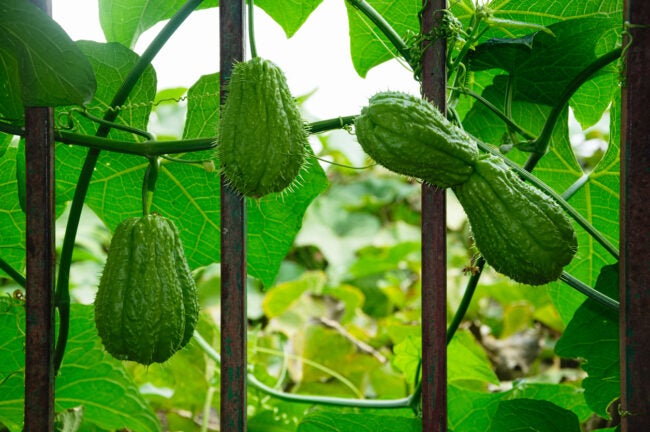 Chayote is a member of the gourd family and a close relative to squash. It is also called vegetable pear because of its resemblance to the green fruit. Chayotes are easy to grow, have few pest issues and can be harvested over a long period of time. While chayote originated in Mexico, it can thrive in a variety of climates, including slightly cooler ones in the US 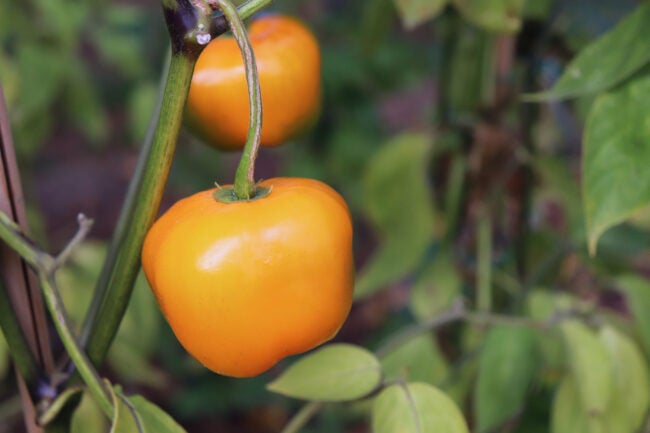 Not all peppers can be grown vertically, but planting rocoto pepper seeds is a good choice for those with limited real estate. They thrive in containers and can be trained to grow upwards. While these vegetables might closely resemble bell peppers, they’re actually a lot spicier. They measure up to 100,000 Scovilles (compared to bell peppers, which contain no capsaicin). Their heat makes them great for making hot sauces or simply spicing up a meal. 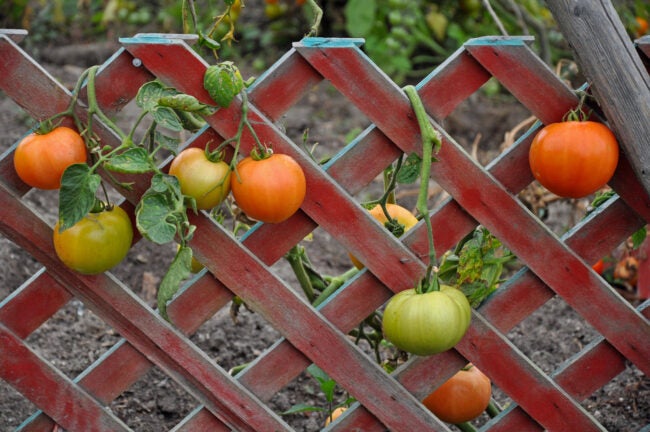 Tomatoes may not be naturally vining vegetables, but they are still commonly grown vertically—they just need a little help along the way. When tomatoes grow on a trellis, they’re able to access more sunlight, resulting in a higher yield at harvest time. Tomatoes come in many different shapes and sizes, so you can find varieties that will grow well and produce fruit in practically any environment. Determinate tomato varieties tend to be smaller and bushier, so use indeterminate varieties for the best climbing results. 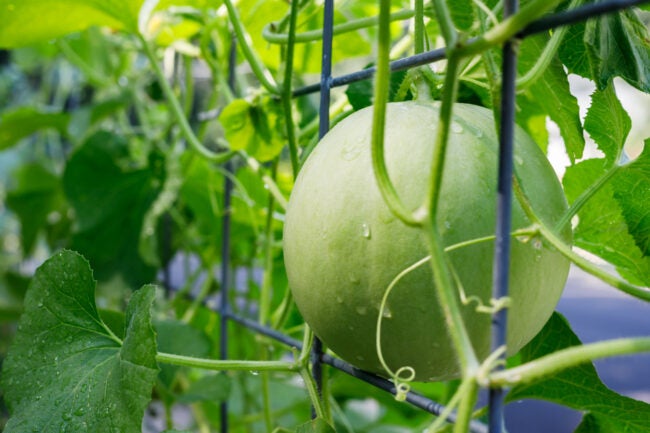 Many people assume melons are fruits, but they’re actually members of the Cucurbitaceae family—which includes squash, cucumbers and gourds. This technically makes them a vegetable. Melons are known for taking up a lot of space, but gardeners can minimize their growing area by training them to climb a sturdy trellis or fence. Some of the best varieties that work as climbing vegetables are red-seeded citron, cantaloupe ‘EarliChamp’ and Blenheim orange muskmelon. 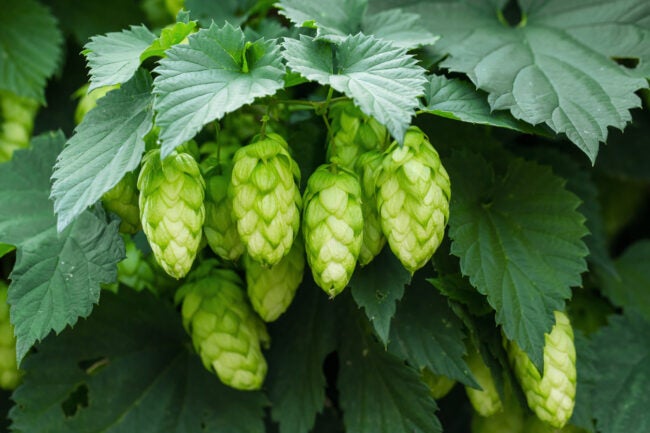 Interested in brewing your own beer? Take your homebrewing a step further by growing your own hops at home! Hops add a bitter taste to many varieties of beer, and they can have a different impact based on when they’re used in the brewing process. They grow quickly and easily, and can take over an entire fence in seemingly no time at all. While hops are primarily used in beer brewing, they can also be found as a flavor additive in sauces and marinades. 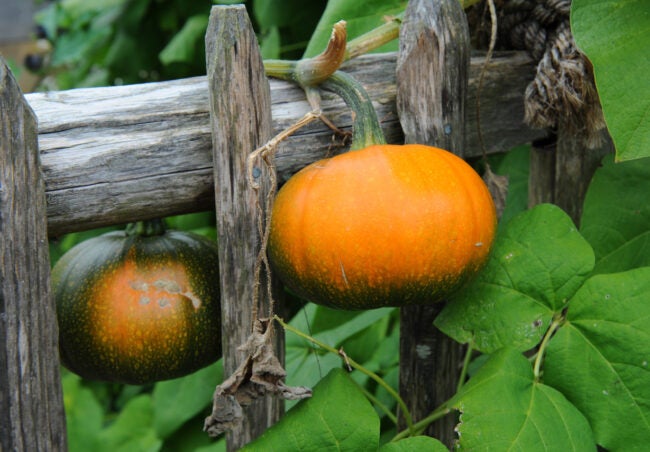 Winter squash varieties, such as acorn squash, butternut squash and even pumpkins, can grow vertically in containers. These veggies are perfect for roasting when the weather starts to cool, and they make great additions to soups and other dishes. Growing winter squash on a trellis requires a little extra work, including creating hammocks for the maturing squash when they become too heavy to support themselves. 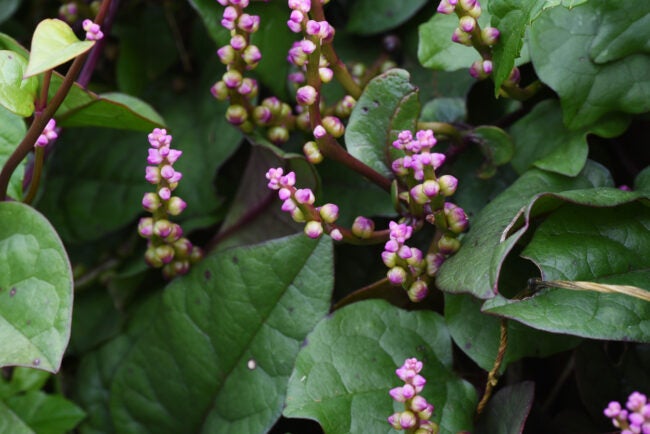 Malabar spinach—or climbing spinach—isn’t technically the same as the spinach we’re used to seeing in the grocery store. It does, however, have similar green leaves that are used in many Indian dishes. In warmer climates that don’t experience frost, Malabar spinach can even grow as a perennial. The best part is that when you pick the spinach leaves, they’ll grow back to make for a long harvest season. 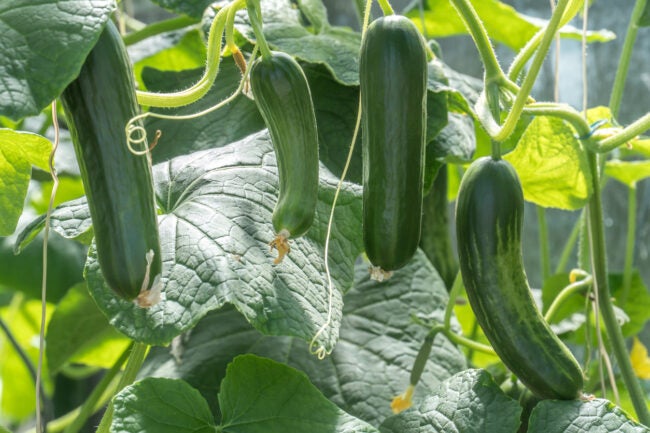 Summer squash like zucchinis are known for producing such a plentiful harvest that gardeners have to give them away. Most varieties are semi-vining and can be somewhat difficult to control on a plant climbing frame, but there are some fully vining varieties that are well-suited to growing vertically. Some examples that grow well on a trellis include Costata Romanesco and Tromboncino.