The Chicago Bears wrapped their rookie minicamp last weekend, where a new group of rookies — from draft picks to undrafted rookies to tryout players — participated in three days of practices.

The Bears made a slew of roster moves following rookie minicamp, including signing an impressive six tryout players. In conjunction with those additions, they released of five previously-signed undrafted rookie free agents and Khalil Mack’s younger brother Ledarius Mack.

Chicago currently has 88 players on their roster, so there are still two spots to fill. But here’s an updated look at where the Bears roster stands at each position following 2022 rookie minicamp and the new signings:

There’s no disputing that Fields is QB1 heading into the 2022 season, where he’ll have an entire offseason to prepare as the starter. Chicago signed Siemian to serve as Fields’ backup, and they released Nick Foles after not being able to find a trade partner. 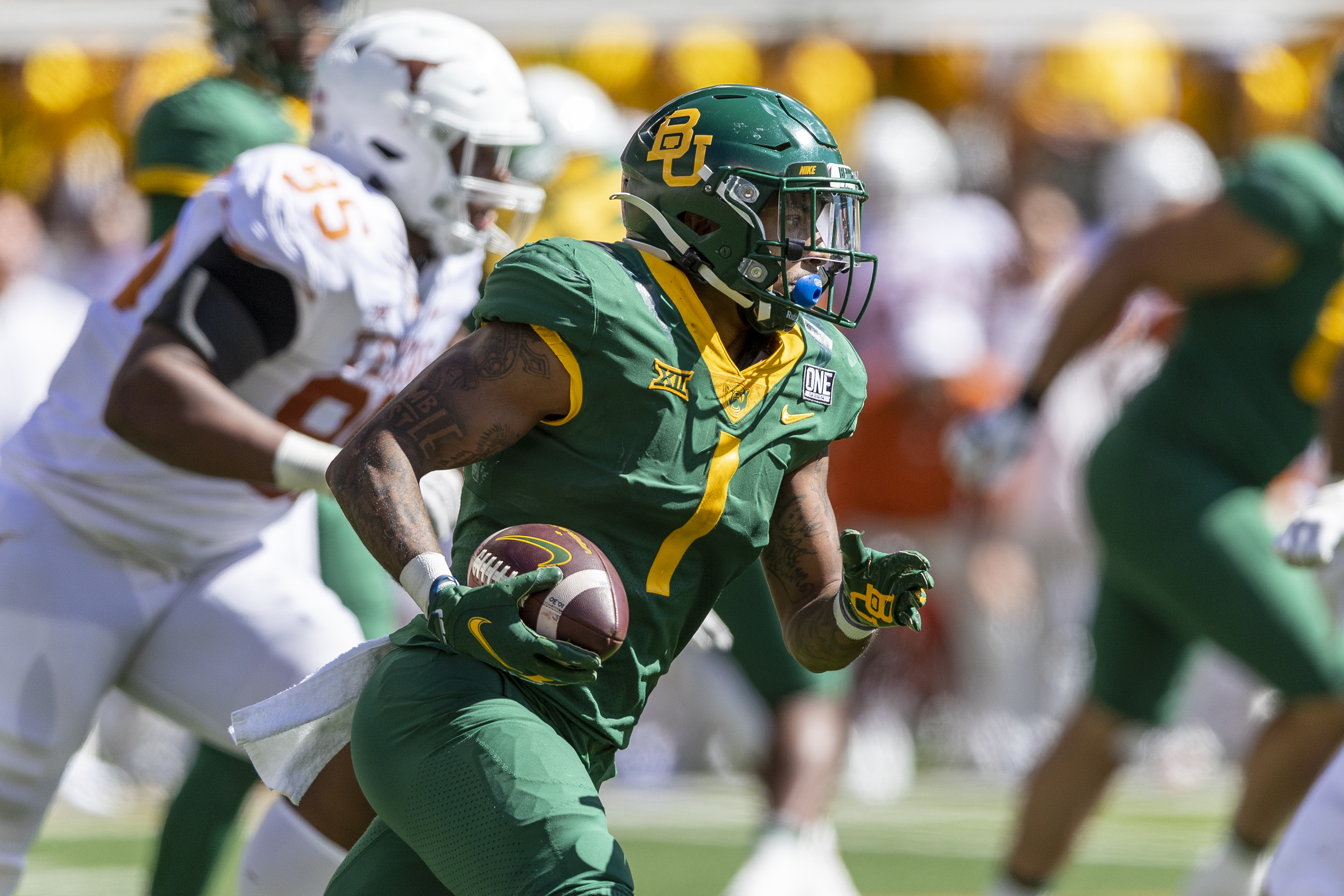 Following Tarik Cohen’s release, the Bears’ running backs room is set with Montgomery and Herbert. Montgomery is entering the final year of his rookie deal and Herbert was impressive in his rookie year. Chicago also added Evans and Blasingame, who will serve as fullback, to the depth chart. The Bears drafted Ebner in the sixth round to add more depth at the position, as well as signed Tuggle following a tryout at rookie minicamp. 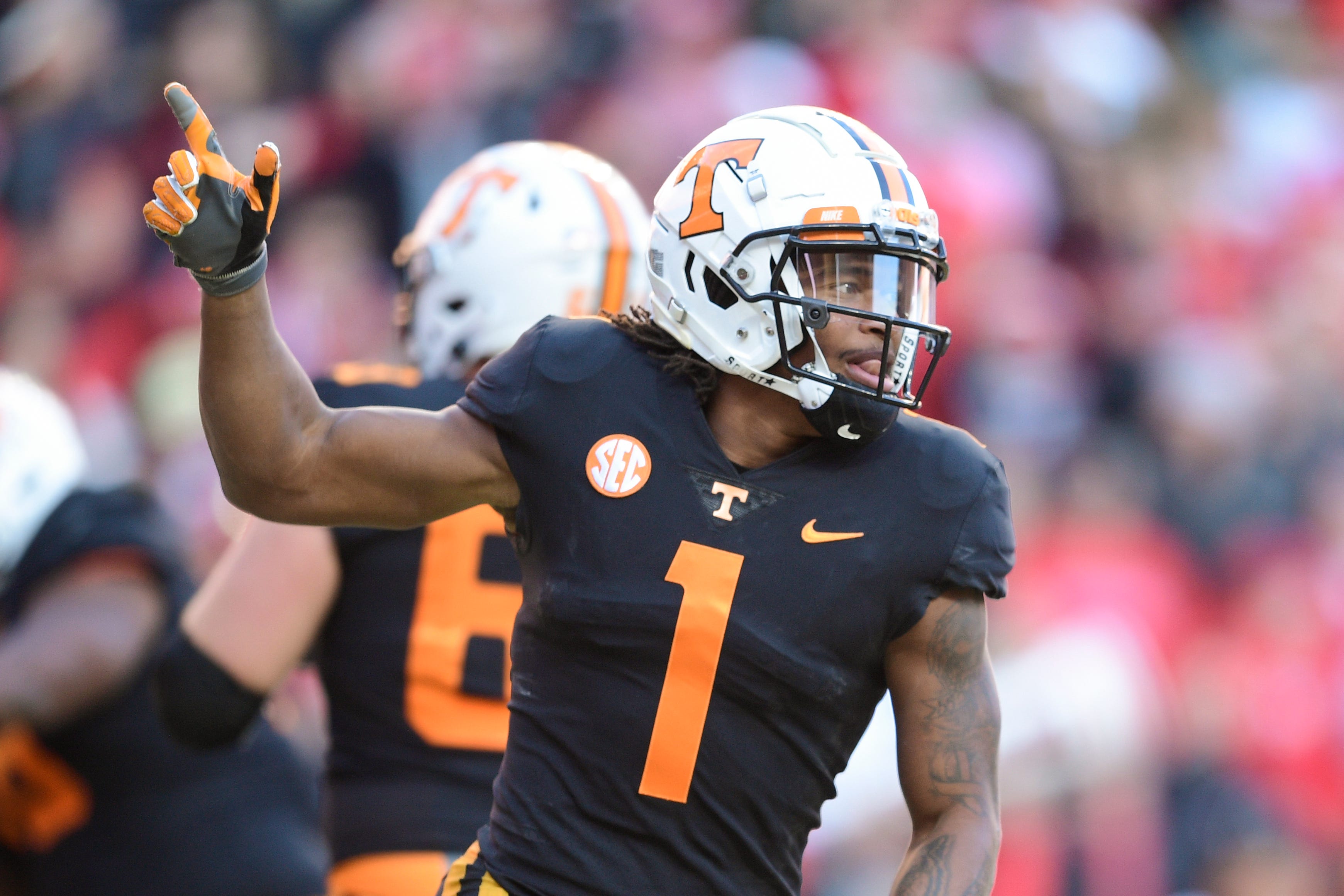 The Bears have started reassembling their wide receiver room through free agency with the additions of Pringle and St. Brown. They join Mooney as the three likely roster locks currently under contract. Chicago turned to the NFL draft to add another playmaker for Fields in Jones, who’s a speedster that can become dangerous in Luke Getsy’s offense. The Bears also signed four receivers in rookie minicamp in Finke, Holder, Litwin and Shaa. 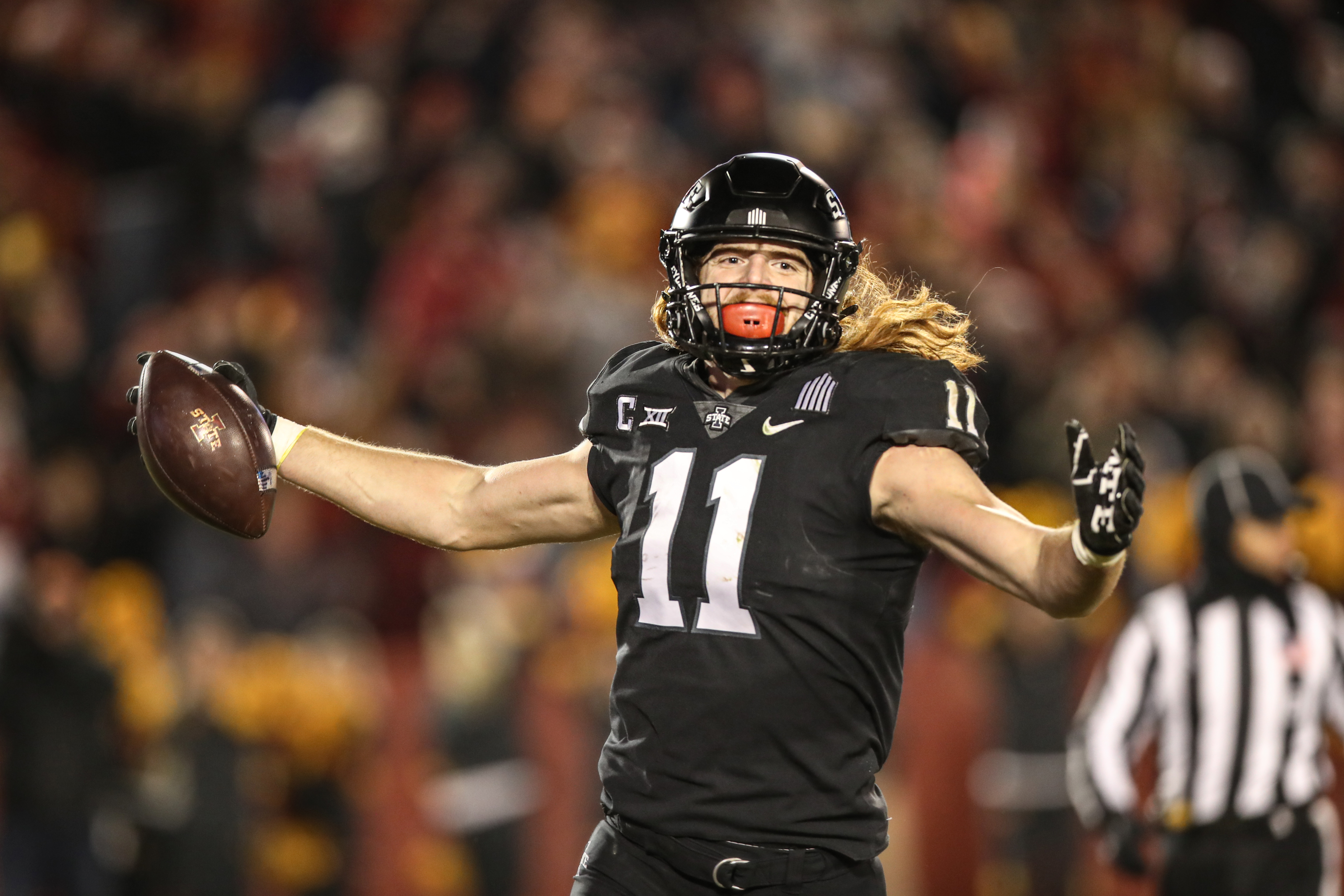 Tight end is one of the more solid position groups on offense with Kmet locked down. They added more bodies to the room with the free-agent additions of Griffin and O’Shaughnessy, as well as re-signing Horsted to a one-year deal. The Bears signed undrafted rookies Allen and Tonges in rookie minicamp. 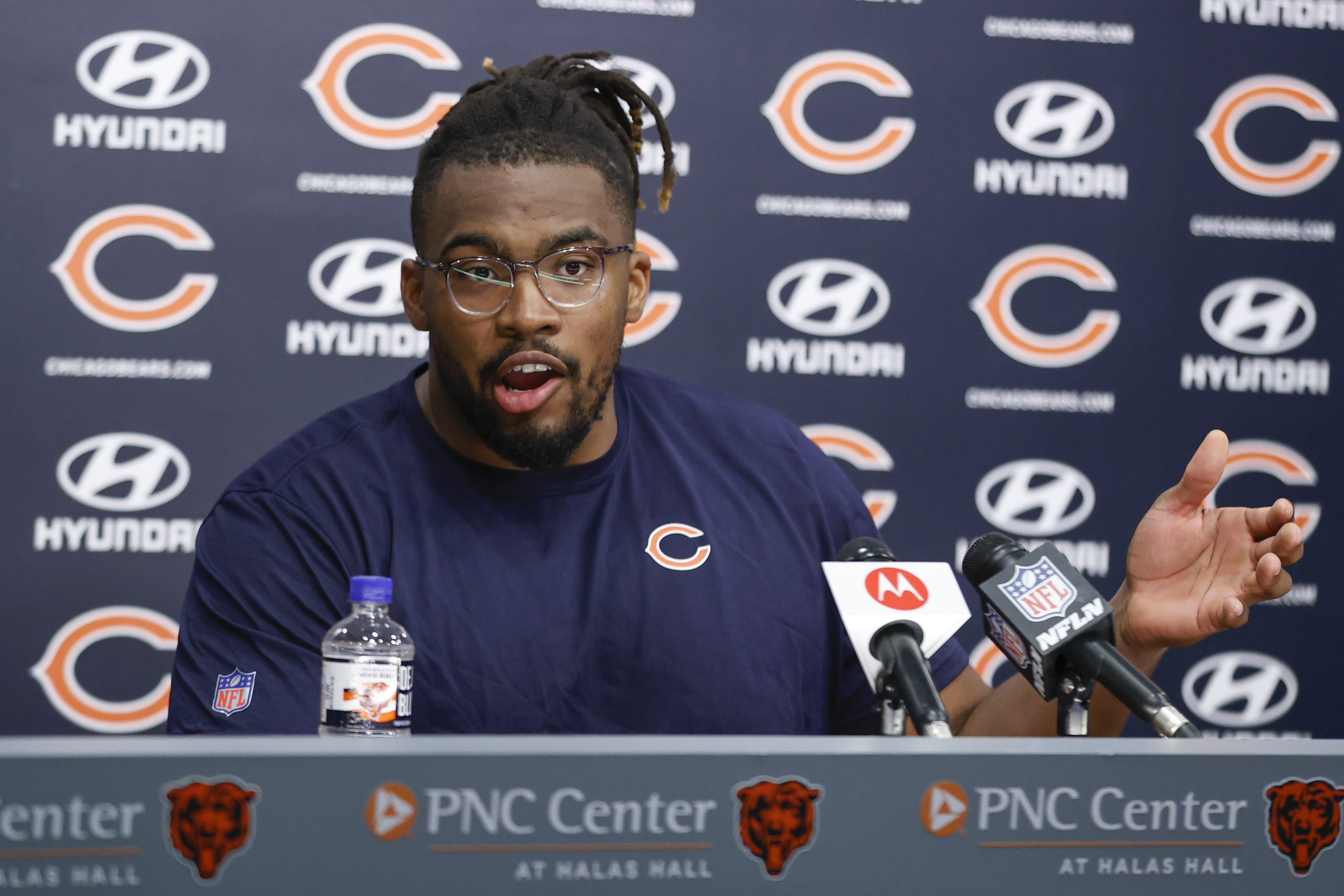 The Bears didn’t do much to address the offensive line in free agency, with Patrick being their biggest signing. Chicago drafted four offensive linemen on Day 3 of the draft in Jones, Taylor, Kramer and Carter. They also signed undrafted rookie Delance in rookie minicamp. Whitehair, Patrick, Jenkins and Borom are presumed starters heading into the season with a. vacant right guard spot up for grabs. 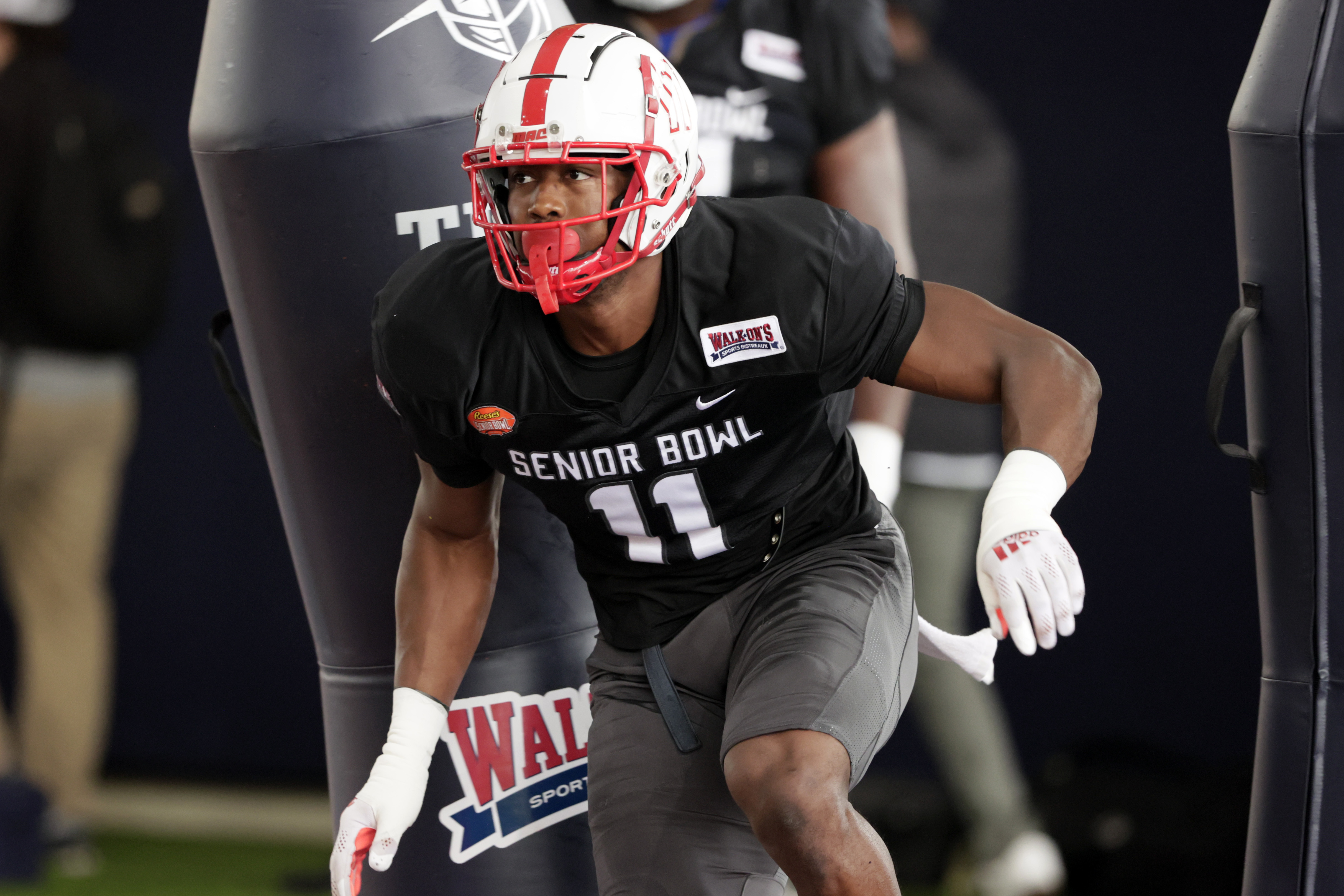 Even after trading Khalil Mack to the Chargers, the Bears are in a good position at edge rusher heading into the offseason with Quinn, Gipson and free-agent addition Muhammad. They drafted Robinson in the fifth round to provide another solid option off the edge along with fellow developmental players Snowden and Kamara. They parted ways with Ledarius Mack following rookie minicamp. 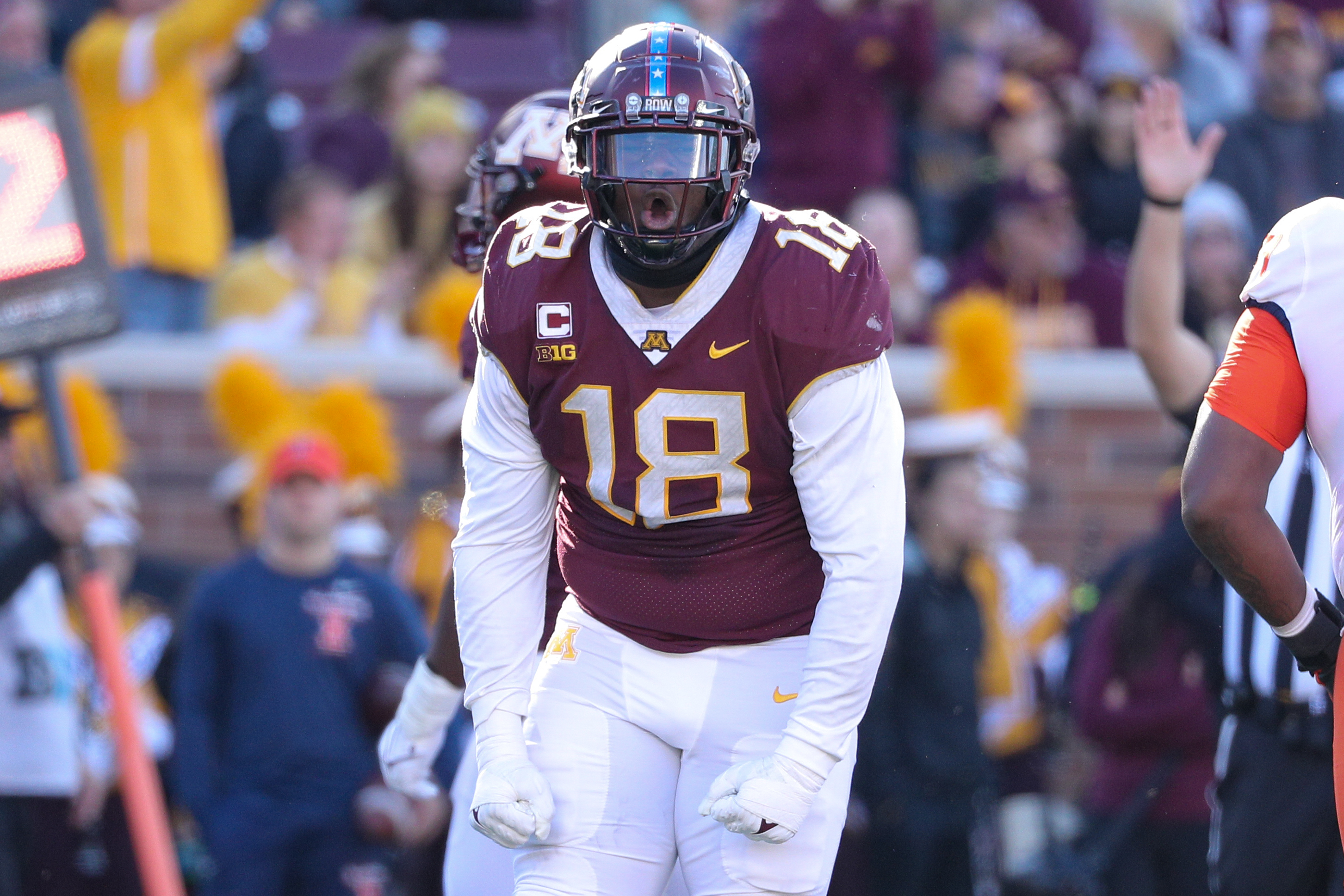 The interior of the defensive line saw some shake-up last week with the expected signing of Larry Ogunjobi. Unfortunately, Ogunjobi didn’t pass his physical, so the team didn’t sign him. Instead, Chicago pivoted to Jones, who figures to serve as the team’s three-technique in Matt Eberflus’ defense. The Bears signed undrafted rookie free agent Dew-Treadway ahead of rookie minicamp. 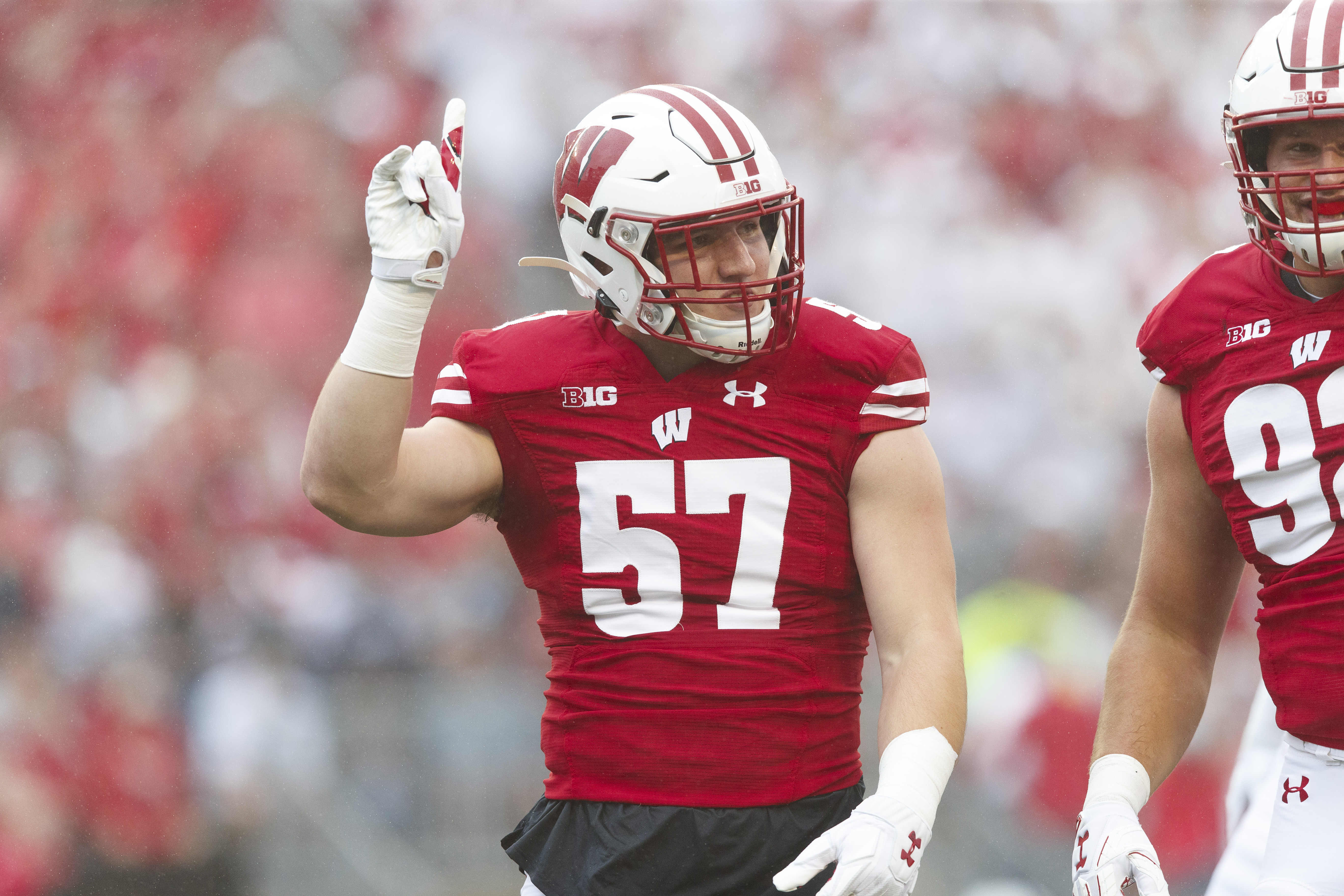 Linebacker remains a need for the Bears, as they have six currently on the roster and just two presumed starters. During free agency, Chicago did find a starter in Morrow, who had a career year with the Raiders in 2020 before missing last season due to injury. With Smith and Morrow in place as starters, the Bears still have work to do. Chicago signed three undrafted rookies in Sanborn, Albright and Avery ahead of rookie minicamp. 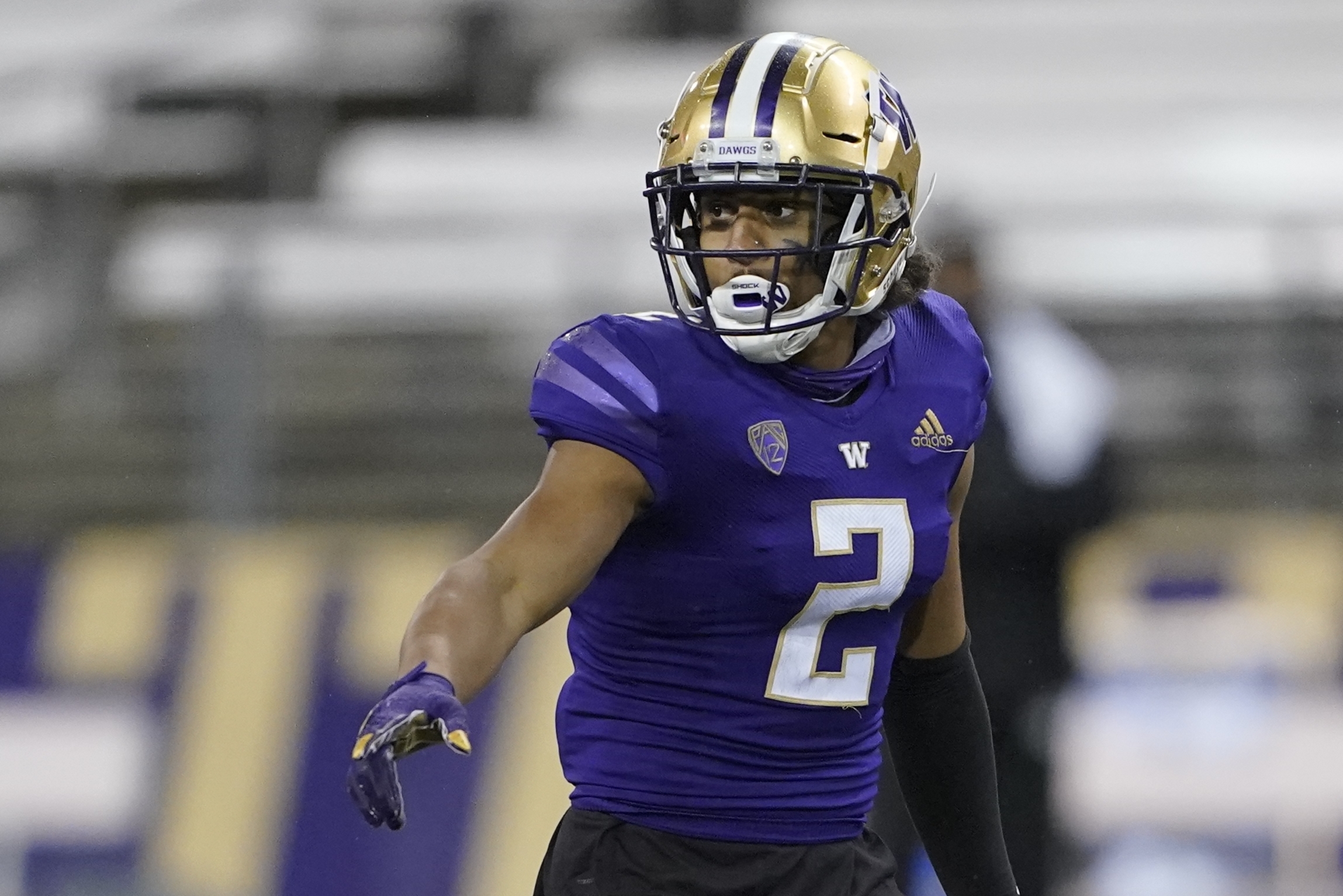 Cornerback was the Bears’ biggest need on defense heading into the offseason. Johnson was the only sure thing at cornerback until they added Gordon in the second round of the NFL draft. Earlier this offseason, Chicago found their presumed starter in the slot in Young. The Bears signed undrafted rookies Green and Jones ahead of rookie minicamp. 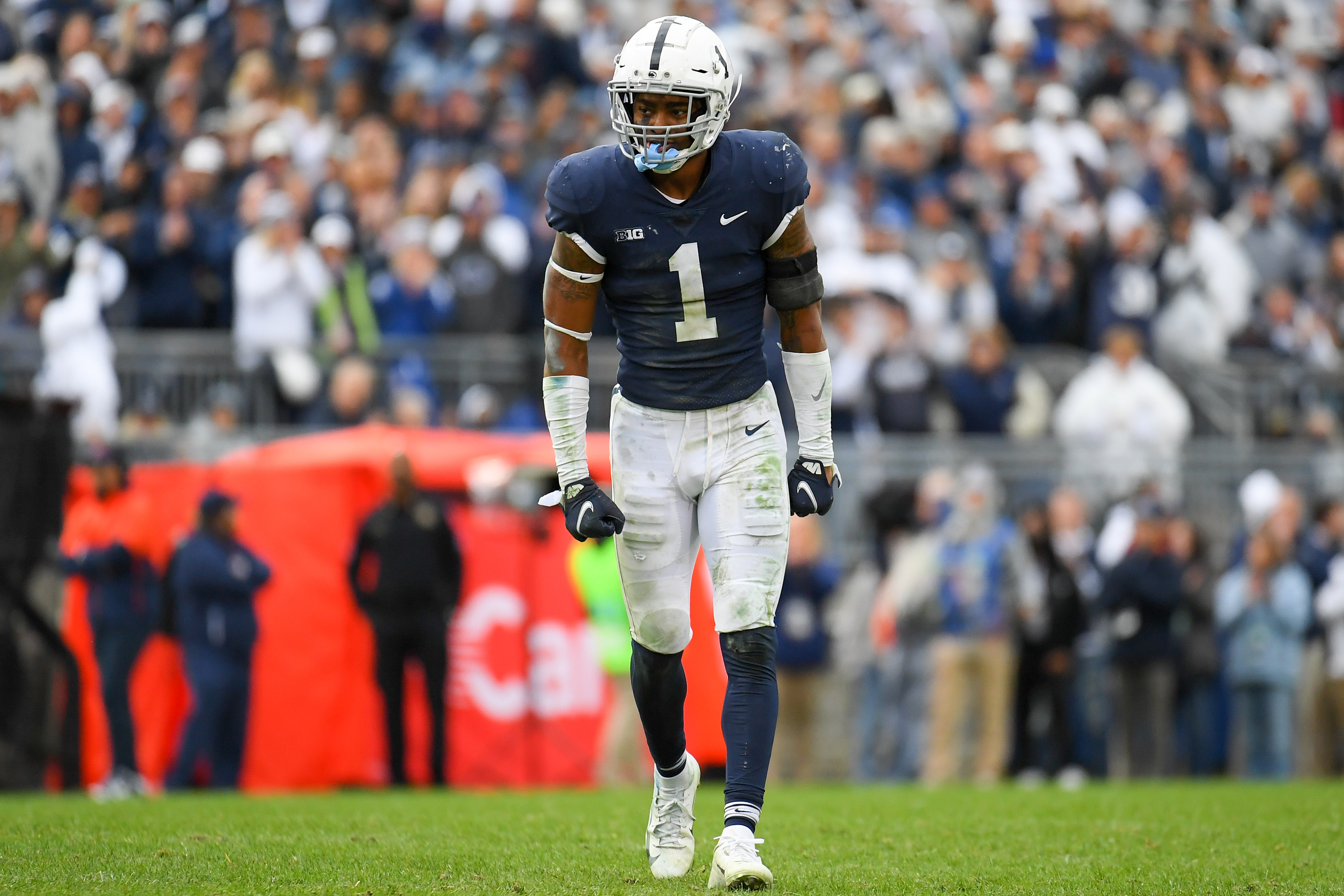 The Bears appear to have their starting safeties in Jackson and second-round pick Brisker, who projects to be an immediate starter as a rookie. Chicago also drafted Hicks in the seventh round to add more depth to a position that was bolstered by the free-agent additions of Cruikshank and Houston-Carson. The Bears also signed undrafted rookie Alexander following a tryout at rookie minicamp. 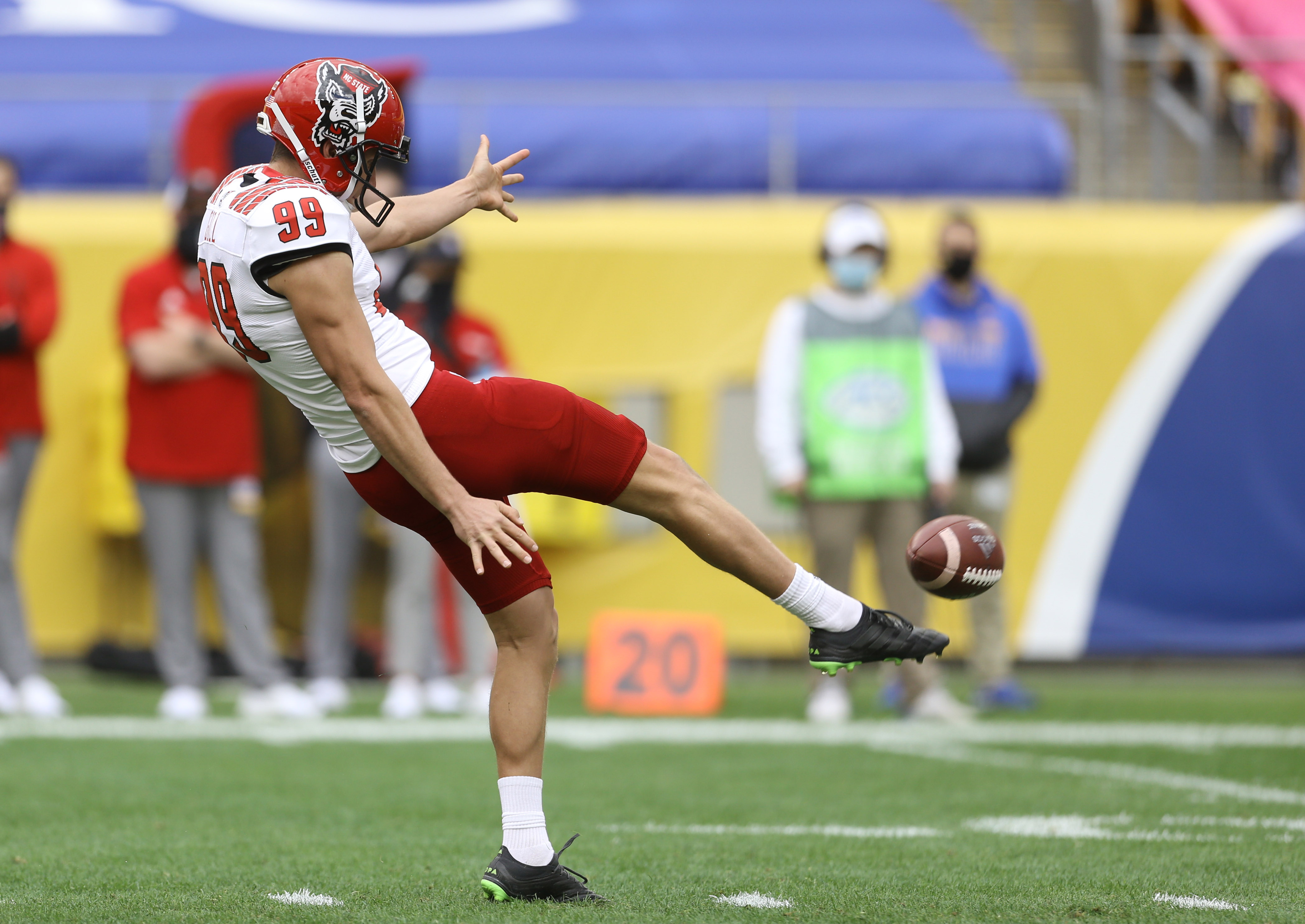 For the first time in awhile, the Bears’ special teams will look a little different. While Santos remains and Scales was re-signed, Pat O’Donnell signed with the Packers. Chicago drafted Gill with their final selection in the seventh round to compete with Winslow. They also signed another long snapper in Ortiz following a tryout at rookie minicamp.