A roaming flock of wild turkeys slowly made their way across the open field next to Cowboy Coop’s three small chicken coops not far from Hodgson Road on Monday morning. As owner Michelle Knopp checked on her flock, she lamented having to keep her poultry locked away.

“I usually let my chickens free range in the backyard for around six hours a day, but that is just not an option with what is going on with the avian flu right now,” she said. “They are pretty grumpy with me, but this is just how it’s going to have to be for the time being.”

Knopp is not alone in her struggle.

With more than two dozen small backyard poultry operations operating in the Flathead Valley, producers are doing all they can to keep the virulent new highly pathogenic H5N1 strain of avian flu out of their flocks.

First detected in domestic birds in Indiana on Feb. 8 of this year, the new AI strain had been detected in wild birds in Newfoundland and Labrador in eastern Canada in December 2021. Since first being detected in the eastern United States in January 2022, it has spread to all four bird migration flyways, including the Central and Pacific flyways, which covers parts of Montana. As of Friday morning, the virus had been detected in domestic bird operations in 33 states, infecting 285 flocks and affecting more than more than more than 37 million birds.

Eight cases have been confirmed in Montana since April 7, with those closest to the Flathead involving 54,200 birds in Glacier County and 40 birds in Missoula.

While the majority of birds affected are at large commercial operations, the small backyard producers that supply eggs and poultry to local markets are far from unaffected.

“Letting this virus run its course just really isn’t an option right now because of how infectious it is. Even if you were somehow able to contain it, you would still lose 80 to 90 percent of your birds. That’s how lethal this infection is to chickens,” Knopp said. “When you have birds, you really have to pay attention to making sure you change your clothes and shoes when you go anywhere. If you have an infection and don’t know it and you wear the same shoes in the coop that you wear when you go to the feed store infection, now you have spread that to the store as well. It would spread out from there. We all have to be very cautious.”

“A lot of times when a backyard flock is infected, by the time we get a confirmation, the majority of the birds on that premises are already dead. This is a disease that works very quickly,” he said. “If one bird has it, you can expect that the rest of your birds will be exposed within the first 24 to 48 hours. The incubation period is anywhere from 36 hours to several days and you can start to see dead birds within two days of exposure.”

Unfortunately for producers, one confirmed infection means death for their entire flock as all the birds are required to be culled to prevent the potential spread of the virus.

“We don’t want these infected birds to be on the landscape creating more of the virus and being a potential threat to other birds,” Zauski said. “We also have an agreement with nations that we export to that we will destroy any infected birds. It’s a demonstration that our response to the threat is robust and aggressive in an effort to stamp out the disease wherever we find it.”

While the government does have a program that reimburses poultry producers for their culled birds at market value, Zaluski pointed out that with the small producers, sometimes it is about more than just money.

“Oftentimes, market value doesn’t even come close to making up for the loss of hobby birds, based on the emotional attachment that people have with their animals,” he said. “All that can be done is to reduce the cost of replacement.”

While reimbursement pays the market value of the birds, it does little to offset the time and effort needed to rebuild flocks that are depopulated, flocks that sometimes have years or even decades of careful breeding to control genetics.

“This is not something we are taking lightly. If we have a confirmed case, then we would lose all of our birds in order to protect others in the area. That represents quite an investment for us and we are just now entering the prime egg-selling season. Rebuilding a flock is not an easy task,” Flathead Quail’s Jayme Ford said. “It’s been challenging lately. When you add that in with rising feed prices, it has been a rough spring for some poultry producers.”

Another challenge facing those needed to rebuild their flock is limited availability of chicks from hatcheries across the country.

Susan Waite of EarthStar Farm in Whitefish said she and her husband were planning to rebuild their chicken flock this year after natural causes and predation had reduced their original flock from 250 to around 20 over the past 10 years, but availability of chicks is already affecting those plans.

“Chicks have been popular ever since covid, so the hatcheries sell out quickly. We got our order in early this year, but that still might not work out for us. I put in three orders for 100 each and I think I will be lucky if I get 50 in each shipment,” she said. “All I can do right now is sit with my fingers crossed that the rest of my order can be filled.”

With producers doing everything they can to keep their flocks safe, Zaluski offers a few tips on how to protect backyard flocks.

“All of our cases in Montana so far have been following documented exposure to wildlife. Typically, it has involved waterfowl, but not exclusively. We know that migratory wild birds have highly pathogenic avian influenza this season. Any activities that can isolate a flock or insulate poultry flocks from the virus would help,” Zaluski said. “That would include keeping birds in house for the next several weeks. It might be inconvenient, but it could save your birds.”

If birds must be kept outside, Zaluski recommends separating them from wild birds using netting or some kind of overhead shelter.

Zaluski also stresses exercising good biosecurity practices, such as the use of different clothing and shoes for working around poultry and washing hands before and after contact.

The US Centers for Disease Control and Prevention continues to say the risk to public health from this outbreak is low with only two known cases of the virus being transmitted to humans, one in England and one in Colorado.

With the summer ahead, Zaluski says there is reason to be optimism.

“The good news is that we are likely to see a significant reduction in risk over the next few months,” he said. “When we had our last outbreak in 2015, the last infection we saw was in June. That is caused by the end of seasonal migrations and hotter, dryer days that make it hard for the virus to survive in the environment.”

In the meantime, local producers will continue to do their part to protect their flocks.

“I am not overly concerned, but I am keeping an eye on my flock and staying prepared to have my birds tested if we see any signs of infection,” Ford said. “It’s just part of your due diligence to take care of your animals and make sure you don’t contribute to the spread of a disease that could affect other producers.” 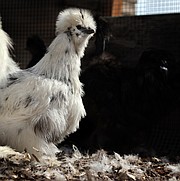