Asclepias incarnata, a native plant commonly called swamp milkweed, being sampled by a native bee, Bombus grisecollis, the brown-belted bumble bee. Swamp milkweed is loved by butterflies and bees, and is the only host plant for the Monarch butterfly species, a safe space for Monarch butterfly eggs and food for its caterpillars.

What’s the buzz? On South Campus and all across Syracuse University, it’s native plants to support pollinators of all varieties. And that is just one part of the University’s efforts in sustainability management.

Other work in the unit has focused on working with students in Sustainability Management’s internship program on a variety of projects, including Bee Campus USA and Pete’s Giving Garden.

All the effort and strategy turns into blooming, buzzing reality with the help of partners in Facilities Services. Pat Carroll, grounds manager, and Joe Quarantillo, grounds supervisor, work side by side on tasks like putting up fencing and planting perennials.

With more than 50 years of grounds experience between them, Carroll and Quarantillo agree that if it came down to a competition of dirt-under-the-fingernails, it would be a tie.

But on the topic of working collaboratively with Sustainability Management on the campus grounds—over 900 acres with more than 600 acres of green space—Carroll says, “We enjoy working with them, they’re great folks, easy to work with. They have ideas and we try to facilitate that. That’s what we do.”

With a long view of the growth of sustainability on campus, Cadwell says, “Over the last 10 years or so, the grounds crew members have been working on replacing many of the annual plants on campus with native perennials. The benefit of native perennials is they don’t need to be replaced each year and they help our native pollinators.” 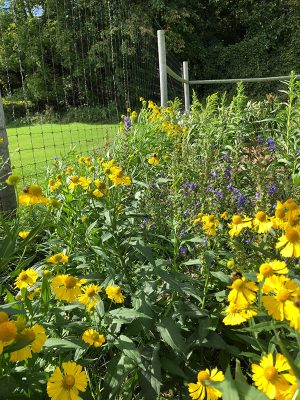 The perimeter of Pete’s Giving Garden on South Campus was planted with 750 pollinator-friendly natives through a grant from the Xerces Society. This showy display helps support the honey bees in six hives also on South Campus.

A great example of this is Pete’s Giving Garden on South Campus. Syracuse University was awarded a grant through the Xerces Society, a nonprofit organization based in Portland, Oregon, to plant 750 native wildflowers along the perimeter of Pete’s Giving Garden.

Why native plants? Plants and pollinators have evolved together and adapted to each other in their local conditions of climate, soil and seasons. They fit each other’s needs and feed each other’s well-being.

The native plants provide food and energy to pollinators: nectar, pollen and seeds, while bees and other pollinators set the stage for next season’s successful plants. That’s why it’s a great idea to garden with native wildflowers, especially on this urban campus with its mix of green spaces, buildings and varied landscaping—a wide and supply of bountiful habitat for pollinator species.

Common horticultural plants, though developed to be showier, brighter or hold longer blooms, just “do not provide energetic rewards to their visitors,” says Cadwell.

But we’re not talking just bees as pollinators. Butterflies, moths, wasps, flies, beetles, other insects, hummingbirds, even bats have a role to play in pollination.

And we’re not talking just flowers either. Trees, shrubs, vines, grasses, ferns and ground covers all add to the party, each has its various charms.

Trees—red maps on South Campus; eastern redbuds in several areas across campus, near Slocum Hall and Huntington Hall, easily 50 could be counted while driving around campus; serviceberry trees on the Kenneth A. Shaw Quadrangle, behind the Hall of Languages ​​and next to the D’Aniello Institute for Veterans and Military Families. 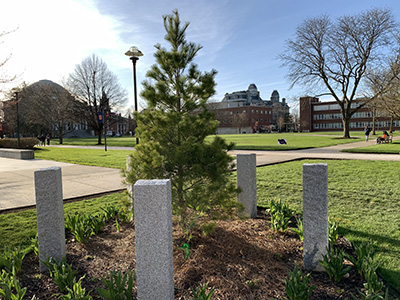 The University’s newest white pine tree, Pinus strobus, is located on North Campus at the new Onondaga Art Installation near the Orange Grove.

The serviceberry is new as of three years ago, says Quarantillo, “and they’re settling in great!” White pines grow wild on South Campus, some with more character than glamor, says Quarantillo. The newest white pine is on North Campus, near the Orange Grove.

Shrubs can be found all around campus, even nearby, including winterberry at Heroy Geology Laboratory and at the Syracuse Center of Excellence; eastern ninebark with its exfoliating bark (like a paper birch tree) at the Martin J. Whitman School of Management building, near Eggers Hall and in other locations; and gray dogwoods.

Flowers in abundant variety can be found throughout campus. This short list includes bee balm, Canadian anemone, black-eyed susan, coneflower, creeping phlox, goatsbeard, purple asters, red columbine, swamp milkweed and turtlehead. Many of these can be found just outside of Sustainability’s offices at the Carriage House on South Campus.

But why the strong push now for native plants? For Cadwell, she says, “It started when we became a Bee Campus USA campus in 2019.”

That kicked off an intense and intentional commitment to the wide use of natives in campus plantings, a refinement of an effort already underway for the past decade. Bee Campus USA provides a framework for campus communities to work together to conserve native pollinators by increasing the abundance of native plants, providing nest sites and reducing the use of pesticides. “In this region, Bee Campus USA uses plants that are all native to the Northeast,” says Cadwell.

When the University joined Bee Campus USA, it recognized the importance of native bees and other native pollinator species. One extra project was incorporated through a Campus as a Lab for Sustainability initiative where honey bees were added to campus. Though honey bees are not a native species in our area, they do help pollinate our native plants. As a bonus, they make honey with a distinct Syracuse University flavor that is harvested twice a year, with sale proceeds going back to support the hives.

Cadwell hopes community members and neighbors will see how beautiful the native flowers are and be encouraged to plant their own pollinator gardens. She says, “With enough research you can find as many native plants for your area that are just as pretty and floral smelling as nonnatives.”

Here’s advice from Sustainability and Grounds for those new to this field.

Carroll says, “Finding out things like how many plants will be needed per square foot, how aggressively do they grow and spread” can be key to your planning and decision-making. These and other details like color, height, sun or shade tolerance, soil moisture preferred, time and duration of bloom can make or break a native planting.

Sometimes it’s necessary and practical to mix natives and cultivars in a roughly 80:20 ratio. “For example,” says Cadwell, “in our space on South Campus, at the Carriage House we used some cultivars. The orange yarrow is an example. Most common yarrow is white. With our bee balm, we used a straight native.”

Cadwell notes that bee balm is a good example of how confusing common names for plants can be. Bee balm is its common name; its scientific name is Monarda didyma, that is genus Monarda, species didyma. It’s a very popular plant, easy to grow and the bees love it. When you brush up against it or pick the flowers, its fragrance is amazing. But you might also know it as Oswego tea or bergamot.

And then there is the word, “weed.” Cadwell recalls being surprised to learn that many plants with the word “weed” in their common names are native plants, for example: milkweed, joe-pye weed and sneezeweed.

When asked if the native plants have performed as expected, Cadwell says, without hesitation, “Yes.” In fact, she also says, “I have committed to only adding native plants to my gardens and woodlands. I am also committed to pulling nonnative plants as they compete with the native species. I currently have a room full of seedlings I am growing to plant in my garden in May.”