Hulu’s “The Kardashians” has no pressure to “Keep Up” with its famous family and that’s a good thing.

After viewing the first episode, which began streaming Thursday, that missing puzzle piece seems to be that the famed reality TV family are treated like your average (“average”) documentary subjects. Unlike “KUWTK,” “The Kardashians” isn’t an at-times canned public relations attempt to grab headlines with “serious conversations” sprinkled between commercials. Rather, this family isn’t overtly driving a narrative; they’re just being.

That isn’t to say that there aren’t immediate headline-making moments: Kim Kardashian’s sex tape scandal is referenced in the premiere, as well as her “Saturday Night Live” hosting debut. Kylie Jenner’s second pregnancy is on full display, and Kourtney Kardashian and Travis Barker’s love story is captured by the cameras. But there is an inherent comfortability with “The Kardashians” and we get the feeling that the titular family wants Hulu to truly be a part of their world. There is no need to waste time on intros. The first episode is at once familiar and fresh: We know them, they know us, and fourth wall be damned.

Us looking into their lives is not voyeuristic, but simply acknowledged: Even Kim’s eldest son Saint West playfully taps on the camera lens. Audiences are an honored guest at their table, and Kim feels just fine talking to us directly over her kitchen sink while loading up on fried chicken (she’s only vegan “sometimes,” the KKW Beauty founder joked).

For “KUWTK,” towards the end it felt like the cameras were an unwanted inconvenience, awkwardly an object prodding into private moments. “The Kardashians” and their famous family now, suddenly, feel lighter. Sure, Khloé Kardashian and Tristan Thompson’s an ongoing relationship still has its seesaw effect, and Scott Disick is the would-be “brother” to the family while musing on ex Kourtney’s budding romance with now-fiancé Travis. A change of network doesn’t mean the Kardashian-Jenners will change who they are; it just means we’re seeing who they’re now trying to be in a different light.

As executive producer Ben Winston told Variety, the series isn’t about the Kardashians as a brand, but rather as “six billionaire businesswomen” sisters. “You’ve got to step out of the Kardashian brand to look at it and go, ‘Well, that’s unbelievable.’ That’s a documentary within itself,” Winston said. “And then, when you find out that it is the Kardashians, then you look at it a bit differently.”

1. “The Kardashians” Are a Big Deal, and We All Know That

It’s easy to think of the famous “look at all my shitttt” scene from “Spring Breakers,” but yes, this is just truly how the Kardashian-Jenners live. The opening scenes of “The Kardashians” introduces us not only to where the iconic family is geographically located now — they are all shown in their respective houses, not crowded around a kitchen table crunching on vegan salads — but also their respected independence from one another . Kourtney and Travis smooch outside; over the rolling Southern California hills, Kylie and matriarch Kris Jenner are running Kylie Cosmetics from their office headquarters; further in the valley, Kim is rushing from a SKIMS photoshoot to prep for a kid-friendly house party; and Kendall Jenner hits Tibetan singing bowls in her backyard.

This is all shown via multiple drone shots, reminiscent of California Adventures’ Soarin’ ride. (Hey, it might be a deep cut but it’s on brand for the newly Disney-owned franchise). Audiences are re-acquainted with the Kardashians as much as they are Calabasas. It’s all Bentleys, Balenciaga, and Birkins for the Kardashians, but would we have it any other way? 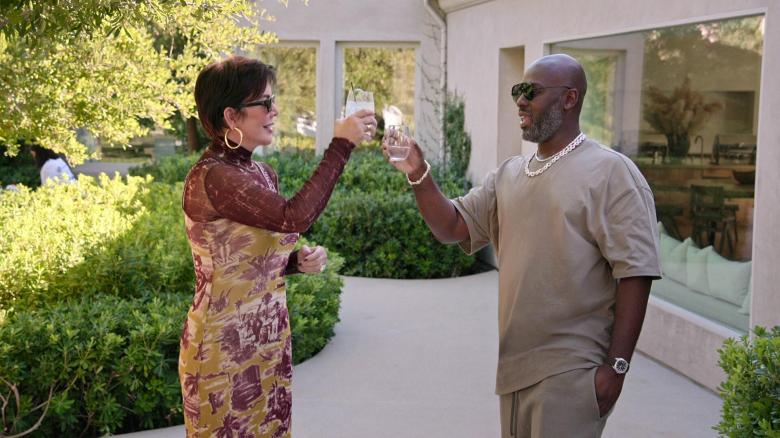 Executive producer Ben Winston previously told Variety that “The Kardashians” is taking an “if it ain’t broke, don’t fix it” approach to reimagining what “KUWTK” built. Yet the new “premium” quality of “The Kardashians” is undeniable, beyond just the expensive drone footage and top-quality cameras. And “The Kardashians” literally does break down its predecessor: The family poses behind glass that shatters to reveal the title of the show. And that shattering speaks to going behind the mirror of Instagram personas, disrupting the reality TV landscape, and breaking into the next generation of media consumption.

“The Kardashians” revels in its accessible luxury — we have access to their luxury — but Kim and Kris remind viewers that it’s all about working hard to get what you want.Those two leading ladies have built this empire together, and “The Kardashians” doesn’t take it for granted. Rather, it’s a celebration of that success and taking a breather after it.

Each sister has also adapted to life away from the cameras different, as Kourtney shares that it was an “absolute dream” to just let her life “unfold” away from the spotlight. And all the Kardashian-Jenner women are being paid equally this time.

“It’s fun to start with a clean slate,” Kim also tells the camera, with her confessionals being the main framing device for the series thus far. “I feel like we’ve had so much time off filming that we’ve kind of gone into our own worlds and done our own thing.”

3. A “More Intimate” Peek Behind the Curtain (and Under the SKIMS Bodysuits) 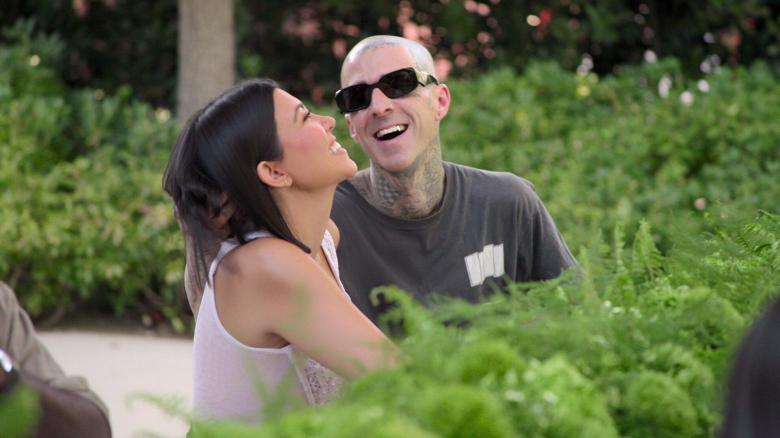 No surprise that it’s Kim and Kourtney with the most updates in the premiere episode. Kim jokes that her big moment that day was cleaning out her kids’ playroom, saying, “That kind of stuff makes me horny…Any mom would get that. If you have a clean playroom, oh my god, you can sleep at night.”

Khloé comments on Kim’s SKIMS bodysuit in a later moment, telling her sister over lunch that there needs to be more fabric in the vagina area. Criticizing a Kardashian family product? That feels like a major no-no for “KUWTK,” where branding and product placement felt at the forefront. At the end of the day, we’re still talking about SKIMS, for better or for worse, but it’s the relatability (how many other SKIMS customers have felt the same way?!) that makes “The Kardashians” have the appearance of being a natural wink to the audience.

The show editing sets up jokes cutting between footage and confessionals in a more effortless way instead of what felt like “serious conversation” to confessional monologue on the E! show. Even Kris’ longtime boyfriend Corey Gamble quips that the cameras surrounding them make him feel like it’s “Season 92” of them being on TV.

Showrunner Danielle King has emphasized a “cinematic” style for the series, and encourages breaking the fourth way to further engage with the audience for an “intimate” look at their lives. Well, mission accomplished.

4. “This Is My Chance to Do Something On My Own” 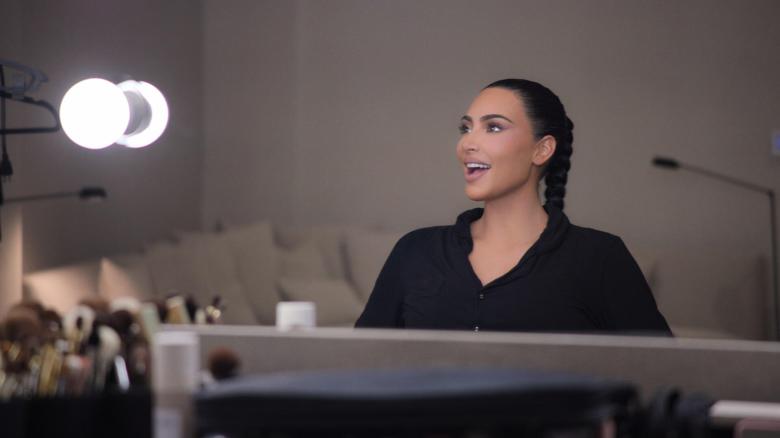 The parallels are not lost on viewers as Kim grapples with asking estranged husband Kanye West to be the musical guest for her “SNL” episode (Halsey ultimately performed instead). Kim goes back and forth over whether she should take the leap and have total ownership over her moment, or if her co-parenting relationship with the visionary rapper is the perfect familiar comfort that she needs. Kim knows that she can’t sing, can’t dance, can’t act, and can’t do accents (her words), and noted she feels like she’s constantly been “fulfilling other peoples’ dreams” throughout her career, namely her mother Kris’ goals for her. (See: the “Dancing With the Stars” competition which Kim “sucked” at).

“This is my chance to do something on my own,” Kim repeats in the first episode, almost reminding herself of that. Celebrity pal Chrissy Teigen leaves a voice memo which Kim plays on-camera, congratulating her on the opportunity. Amy Schumer apparently even offered to help write jokes for Kim’s opening monologue, and Sarah Silverman came up with sketch ideas involving Kanye, if Kim wanted. Even Kim’s now-boyfriend, “SNL” breakout Pete Davidson, comforted her at the MET Gala where they first, well, really met. ‘ ‘If you can read cue cards, then you’re fine,’ ‘ Kim recalls Pete telling her.

And thankfully, there isn’t a prompted cue card in sight for “The Kardashians.” It’s effortlessly, totally the family — on their terms.

Sign Up: Stay on top of the latest breaking film and TV news! Sign up for our Email Newsletters here.