This adorable pooch was tongue-tied when a chick gave her an affectionate Easter nip.

Loulou the dachshund, from the Netherlands, was gobsmacked when the plucky little fluff ball pecked her on the tongue.

A hilarious photo showed the dog’s googly eyes widen with shock as the chick introduced itself – by shaking her tongue.

She looked like a cartoon character in a follow up snap, in which her tongue has retracted into her mouth like a jack in the box, as the playful chick peers up at her.

Lou Lou, the insta-famous dachshund, went viral online after a series of hilariously adorable shots of her posing with baby birds 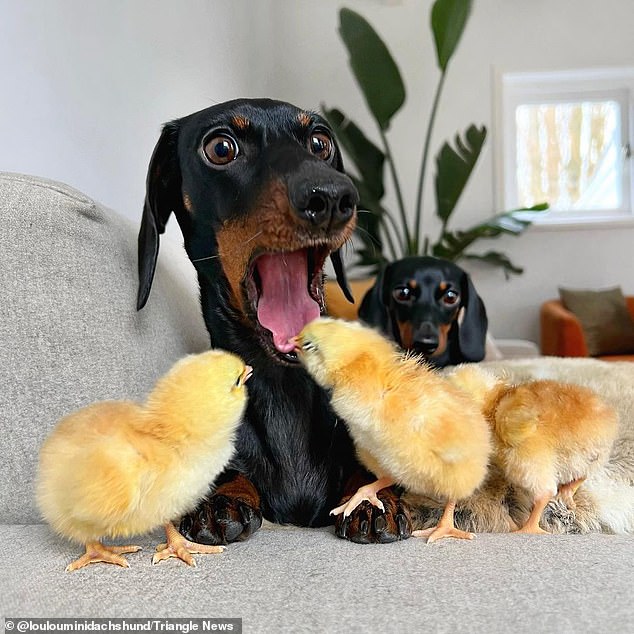 Ouch! In the snap, Lou Lou’s eyes widen in shock as a cheeky chick catches hold of the end of her tongue

But she got her own back in other funny images which showed her nicking the chick’s leafy dinner.

The gentle mutt sat patiently as she was mobbed by bright yellow chicks in other heart-warming photos.

In one action shot, a baby bird flew through the air like a Kung Fu master about to knock out the far larger Loulou, who seemed nonplussed.

She even let the chicks clamber on top of her head while posing for the camera. 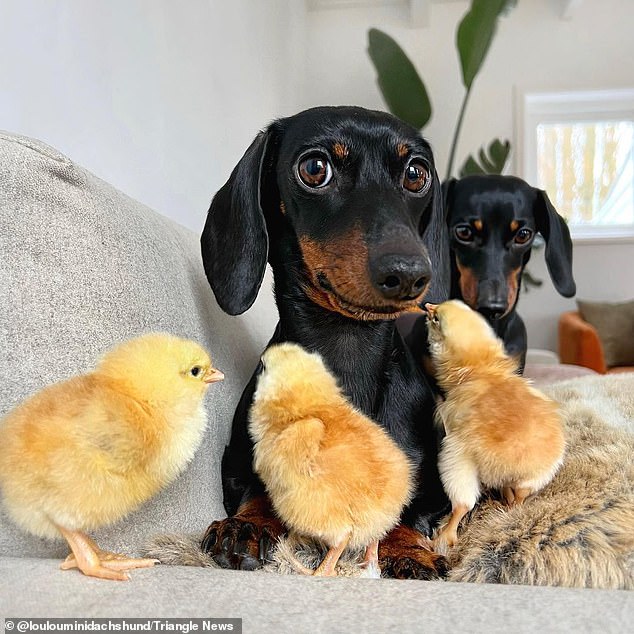 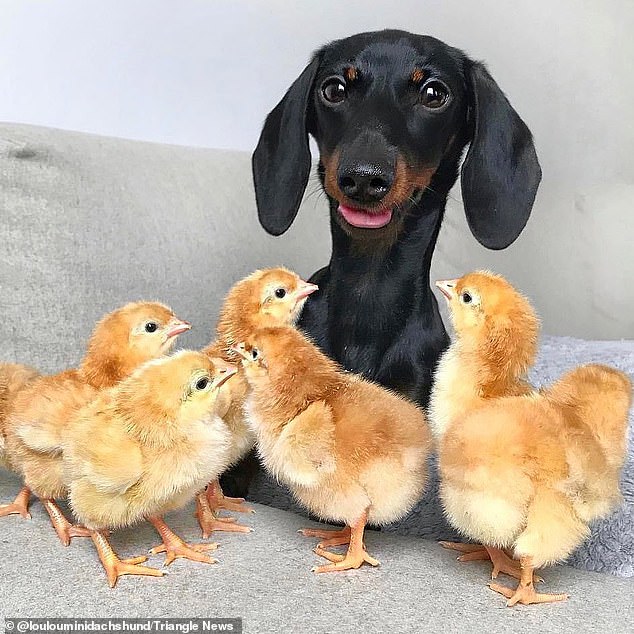 Lou Lou sat looking bewildered after having her tongue nipped by the naughty chick, but still managed to pose for the camera 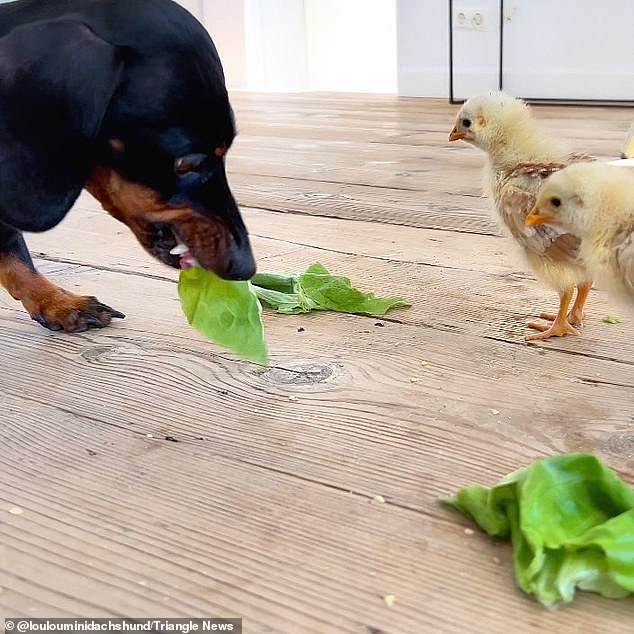 ‘She has always been used to different animals such as rabbits, ducks, chickens, sugar gliders, fish, etc.

‘She has never hurt an animal, hunted or intended to.’

Mother-of-two Eveline grew up with animals and dreamed of being a vet before she trained in fashion. 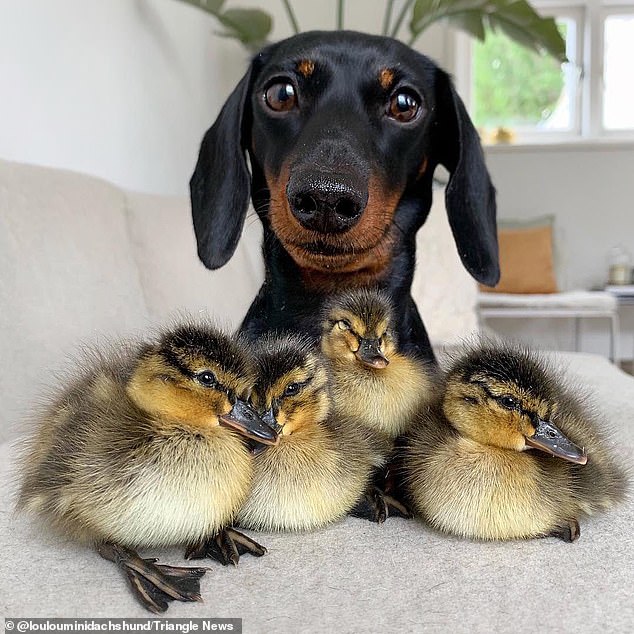 The dachshund is known for being gentle with smaller animals, and is used to being around them 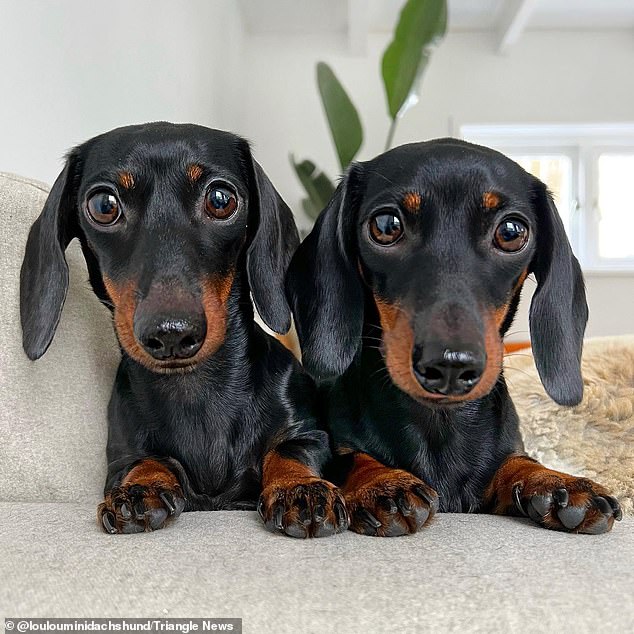 Loulou’s has had one litter, from which the family kept her equally cute pup, Coco, who also ha sa lovely temperament 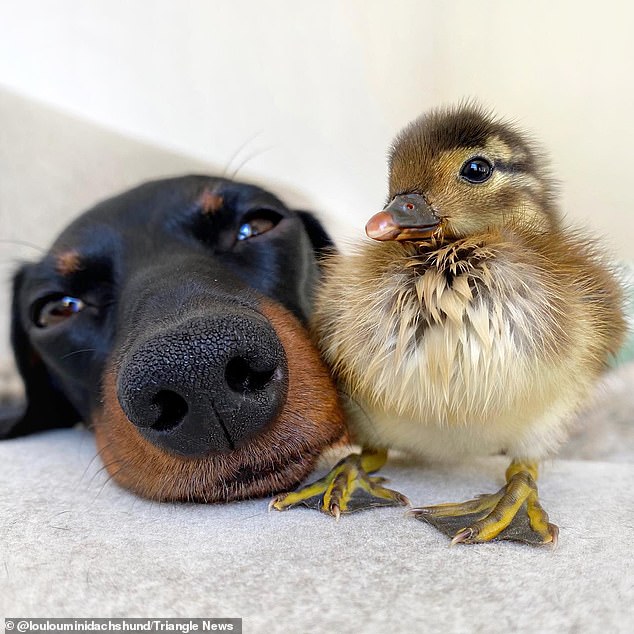 She said Loulou’s had one litter, from which they kept her equally cute pup, Coco.

Coco, two, cuddled up with her mum and hid behind her, looking slightly wary of the chicks, in other sweet captures.

‘She has many of Loulou’s characteristics, including gentle behavior towards small animals. 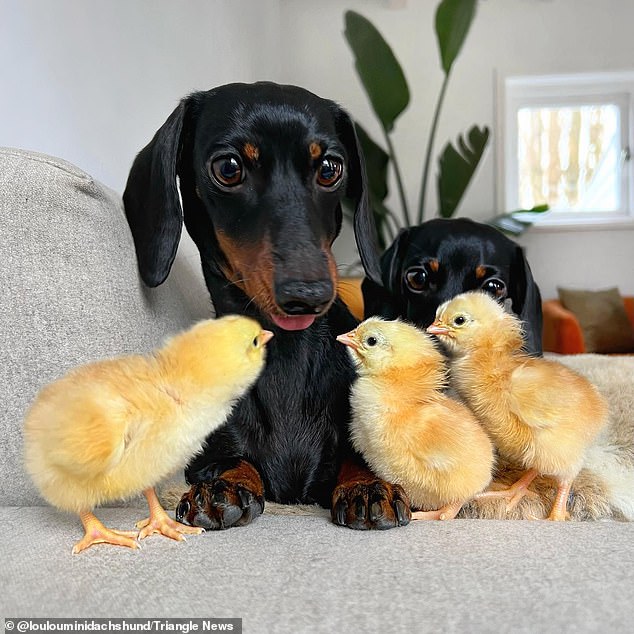 Coco, two, cuddled up with her mum and hid behind her, looking slightly wary of the chicks, in other sweet captures. 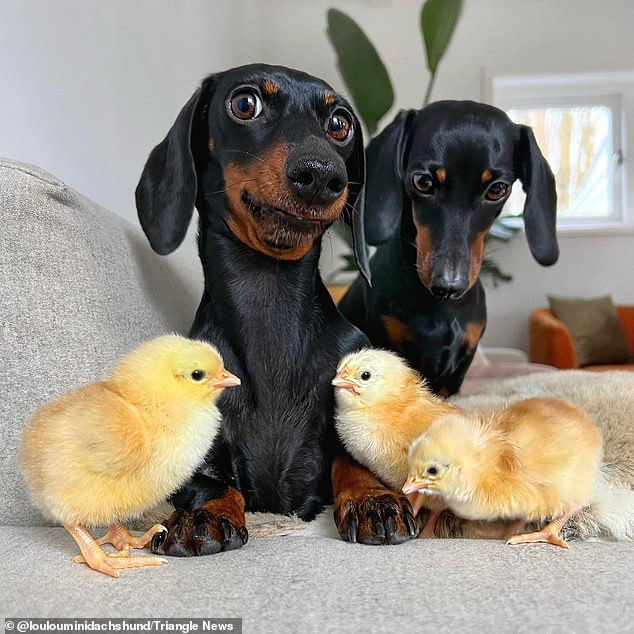 The younger pup has inherited many of Loulou’s characteristics, including gentle behavior towards small animals

‘Loulou is obsessed with food. She can’t be left alone with food anywhere because she will eat everything.

‘She won’t stop eating. Coco is picky with food.’

Eveline shares pictures of her Dachshunds on her Facebook and Youtube channels called The Adventures of Loulou, Coco & Friends.