Among the trees at the bottom of Augusta National Golf Club’s 10th fairway on Friday morning, Angie used her arms to show the way the ball came off Bubba Watson’s club and around a magnolia tree to set up his 2012 Masters victory.

Watson added another Masters title two years later and has eight of his 12 career victories after his first green jacket.

“That spot has literally changed our lives,” Angie said from the 10th hole on Friday. “I love people here, that have never been bringing here before, for the first time. We have some friends here from out of town who have never been able to experience Augusta National and that spot, so it’s pretty great to take them down there.”

On Thursday, Joseph Brasfield stood there with a “treasure map” in hand, pointing at the unfurled piece of paper, then toward the green and back to a small tree.

“Yep, this is it right here,” Brasfield said.

The Atlanta resident had printed an aerial photo of the location.

In 2012, on the second playoff hole, Watson had driven his tee shot far right of the fairway, behind a magnolia tree that blocked a straight shot at the green.

How to watch | ESPN+ | Paramount+ | Golf Channel free on Fubo TV.
We recommend interesting sports viewing and streaming opportunities. If you sign up to a service by clicking one of the links, we may earn a referral fee.

Watson, the lefty with an affinity for dramatic cuts and draws, managed to hit a 155-yard snap hook around the magnolia to within 12 feet of the cup. The University of Georgia alum two-putted for par to defeat Louis Oosthuizen.

“It was just a classic excuse for him to conjure up another piece of magic,” former Masters champion Nick Faldo said on the broadcast.

Jim Nantz followed, “he plays the game really anyone else, and that’s part of the reason unlike he’s so popular.”

Patrons went out of their way to go there during Thursday’s first round. Today it’s marked with a tree, planted two years after the famous shot. When you find the place, you can take in how difficult of a shot Watson had.

“It means a lot,” Bubba said. “It’s a 10-year-old shot and it’s one of those shots that changed my life forever… It’s amazing how fast it goes. Feels like it was just yesterday, but it was 10 years ago. It’s a dream come true, and to be able to pull that shot off in those moments were great.” 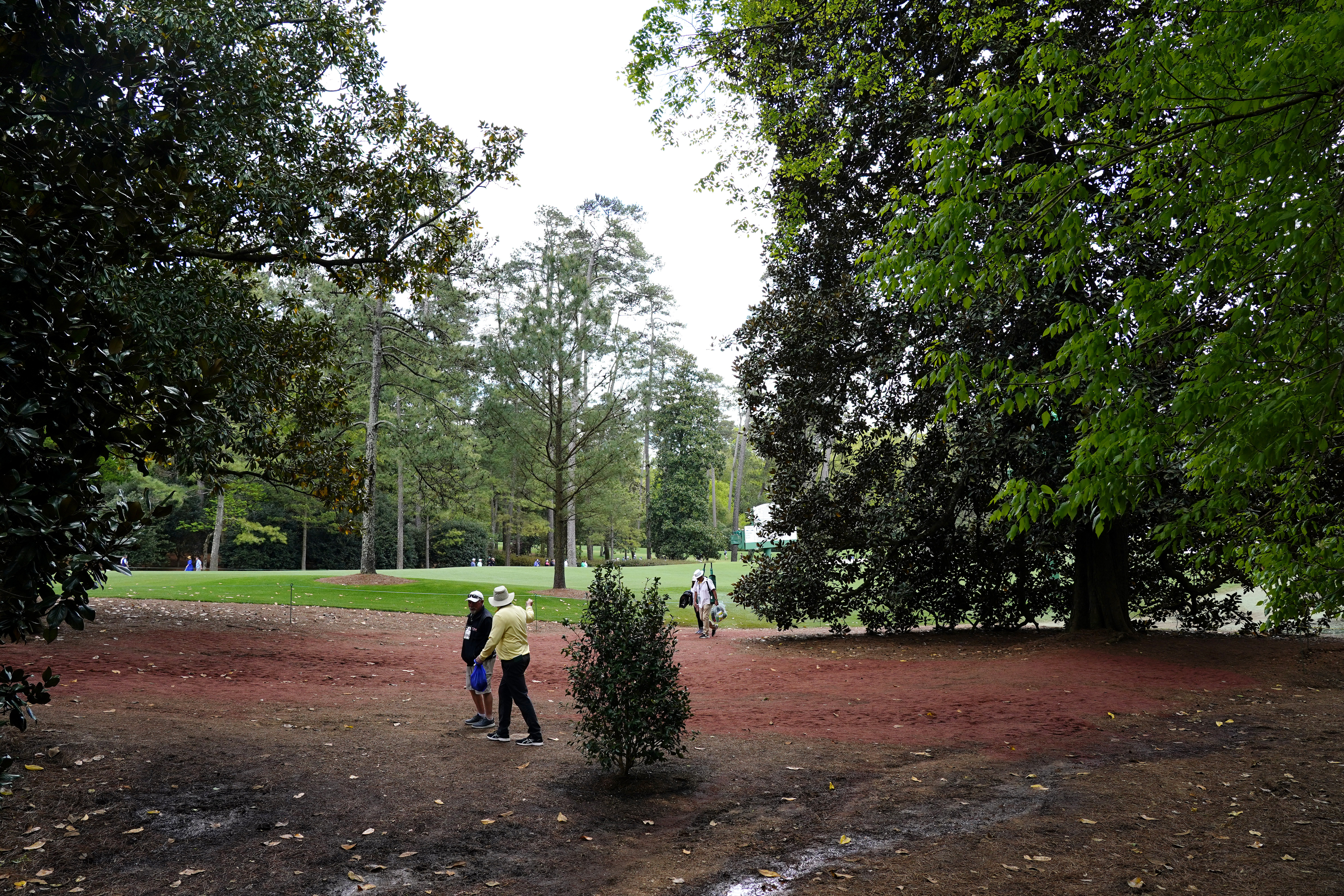 Patrons walk in the woods on No. 10 where Bubba Watson hit a shot to the green at the 2012 Masters during the second round of The Masters golf tournament at Augusta National Golf Course. Mandatory Credit: Andrew Davis Tucker-Augusta Chronicle/USA TODAY Sports

Patrons like Jeff Howe walked past the tree on Thursday morning, their arms bending and swooping to mimic the angle that Watson’s shot had to hook to get around the magnolia tree.

“Nobody can ever hit that shot again,” Howe said, referencing that the tree had taken the spot where Watson’s ball sat.

Brasfield’s bird’s-eye-view printout had a large black shot tracer of the angle the ball had to bend to get into the hole.

He showed the map to New Yorker Robert Klein, and the two spoke in amazement of the shot’s difficulty. 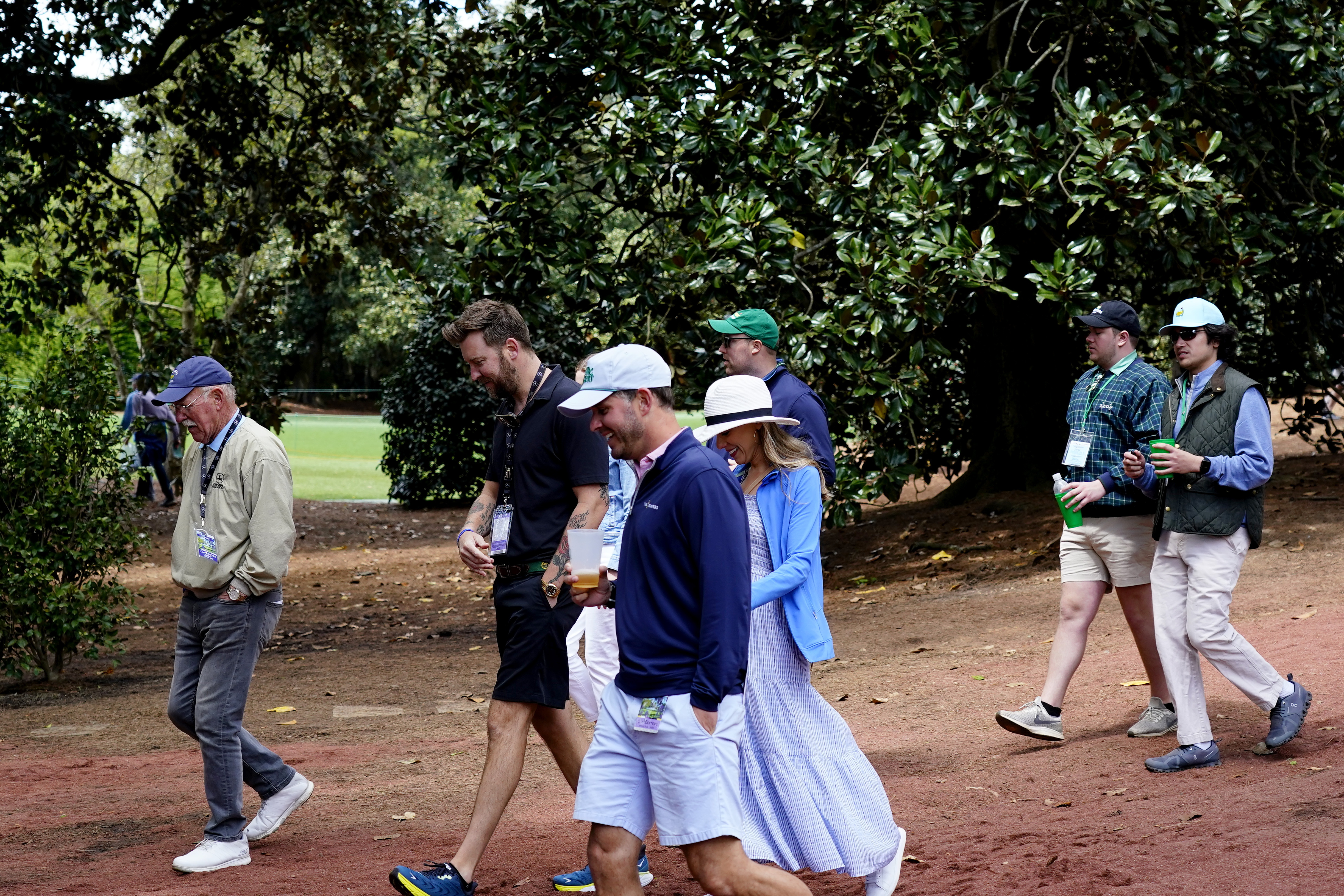 Patrons, including Charles Kelly of the country music group Lady A, walk in the woods on No. 10 where Bubba Watson hit a shot to the green at the 2012 Masters during the second round of The Masters golf tournament at Augusta National Golf Course. Mandatory Credit: Andrew Davis Tucker-Augusta Chronicle/USA TODAY Sports

Ten years later and the spot is still one of the course’s most popular attractions.

“The platform that I’ve been given now hitting that shot, the ability to play the Masters for the rest of my life,” Watson said. “There’s just so many things that happen in those moments, and it just means a lot to my family and me.”