Douglas Smith, from Hertfordshire, UK, has broken the world record for the most tomatoes from a single stem/truss.

In September 2021, whilst stilling his tomato plants, Douglas harvest discovered a single stem with 1,269 cherry tomatoes on it!

He broke his own record of 839, which he had achieved only a few weeks prior. The record before that was just 488 and had not been broken in over 10 years.

Not content with just setting UK-specific records, IT manager Douglas took an analytical approach to his tomato farming methods in order to become the best in the world.

He studied various scientific papers and even took soil samples to be tested in a laboratory, which allowed him to tweak the formula until it was just right.

The record-breaking tomatoes were grown in a greenhouse in Douglas’ back garden, where he spends up to four hours a week tending to the trusses.

The official count was conducted by an independent horticulturalist.

“The tomatoes were counted into boxes of 10, and 10 boxes were placed in a tray. Each tray held 100 tomatoes,” Douglas explained.

An number of 1,269 tomatoes were counted in total. 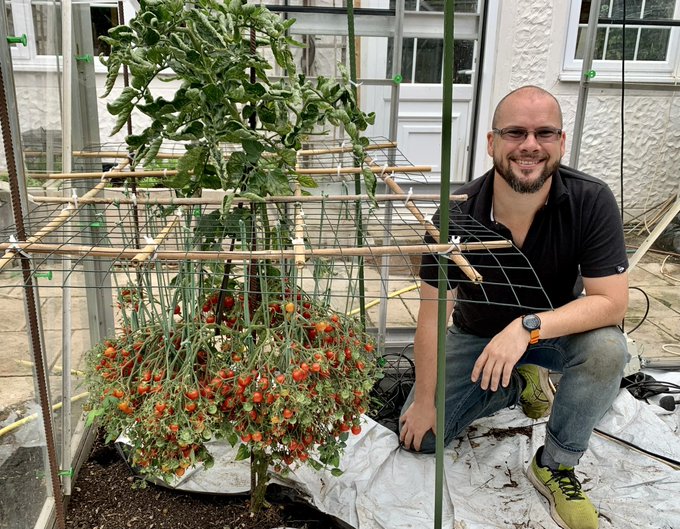 He recently grew a supersize sunflower measuring 6 m (20 ft), although it didn’t reach the heights of the tallest sunflower ever, which stood 9.17 m (30 ft 1 in) tall, grown by Hans-Peter Schiffer (Germany) in 2014.

Douglas told the BBC that he “likes to run little experiments with other giant veg and giant crops.”

These experimental crops are trial runs for when Douglas decides to fully commit to each particular record attempt.

Whilst we don’t have a record for the most peas in a pod, Douglas will have his work cut out for him when trying to grow the world’s heaviest potato and heaviest eggplant/aubergine.

It’s looking likely that the summer of 2022 will see many vegetable world records trade hands. We look forward to seeing the fruits (and veg) of everyone’s labor!