The one race that leaves a glaring hole on Nicky Henderson’s CV is the Grand National.

So it was somewhat ironic that long-standing family friend and owner-breeder Robert Waley-Cohen, who has enjoyed so many big moments with Henderson, should own Noble Yeatsyet have the horse with Emmet Mullins, his first runner in the race who won at odds of 50-1.

While Henderson did not have a runner after Caribean Boy was found to be lame on Friday morning, the Seven Barrows handler was quick to pay tribute to retiring amateur rider Sam Waley-Cohen, who rides out at Seven Barrows, and the winning jockey’s father.

“Our first Grand National (together) I can remember was with a horse called Wont Be Gone Long, who was favorite for the false start Grand National (1993) and Richard Dunwoody was on it. We thought we were going to win.

“But the extraordinary thing is, my Grand National record and Sam’s are about as far apart as you could possibly dream of.

“Sadly my horse went lame on Thursday, so I was watching a handful of horses and not surprisingly one was ridden by Sam. We knew it was going to be his last ride and it is fantastic how he has managed to do what he has.

“He has a very successful (dentistry) business, so he hasn’t got the time to be riding. He runs in here at 7.30 in the morning and runs out again at 8.30 and he’s off to work. 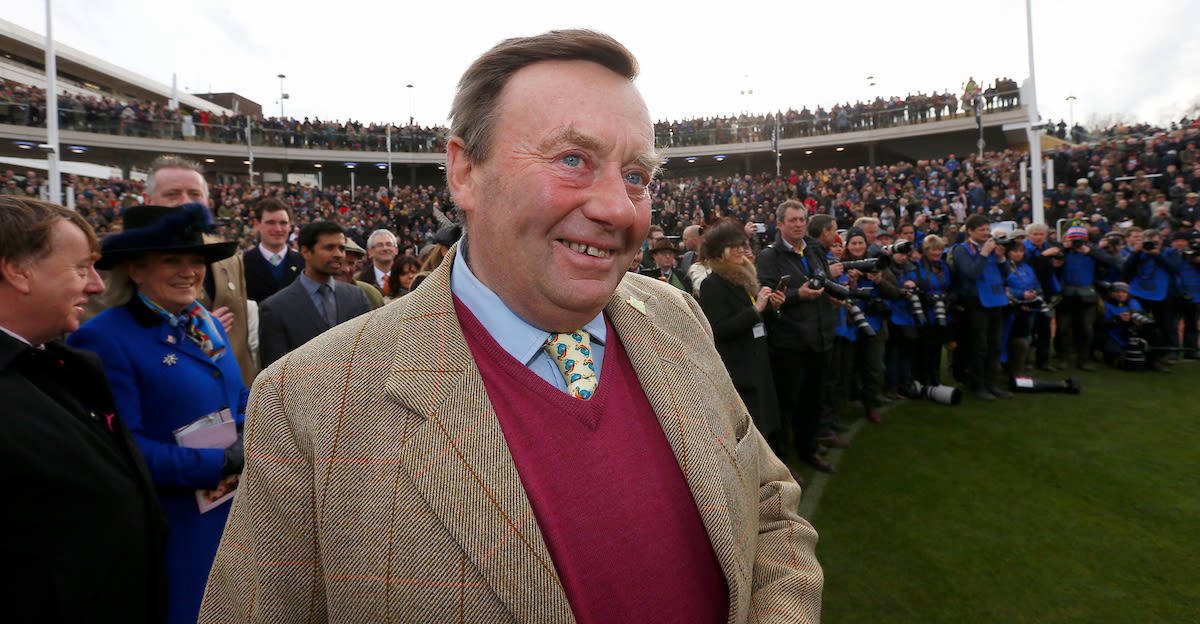 “He comes and rides out and keeps himself incredibly fit and while we all used to enjoy riding, the way he manages his riding with his business is absolutely miraculous, because he is not riding regularly.

“I am just thrilled for the whole family.”

Robert Waley-Cohen previously had horses with George Peter-Hoblyn before Henderson took over the training when the owner was still riding.

“We have been in partnership for a very, very, very long time. I trained a winner ridden by Robert some while ago, a hunter chase I think it was – that was a long time ago,” Henderson said.

“One of the first horses I had for Robert was called Rustle, who won the bumper at Aintree one year (1987).

“We have a nice family here at the moment called Touchy Feelywho is out of Liberthine.

“Robert, over the years, has started the stud and the breeding side of it, which he absolutely loves.

“So quite a lot of these horses are out of mares that we have trained and we have all been down the road together.

“Robert is very knowledgeable about his breeding and he loves that part of it as much as he loves the racing, like most owner-breeders do. It’s double the input and double the satisfaction.

“I know they bought the horse that won yesterday, but most of the horses coming into training are homebreds.

“We go back a long way and I think it goes without saying that the one person they will undoubtedly be dedicating the National to will be Thomas, Sam’s brother (who died of cancer at the age of 20 in 2004).

“I know that was a poignant part of it. It was a tragedy for the family and I know Sam always has been riding with Thomas, if you know what I mean.”

For Henderson, the long wait for a National winner goes on, although he admitted: “I fancied Caribean Boy quite a lot. On Thursday he was brilliant and on Friday morning he was lame! He will be all right tomorrow. That’s racing. Let’s hope we get there one day.”

Yet the 71-year-old was effusive in his praise for the winning jockey who had announced earlier in the week that this would be the final ride of an incredible amateur career.

“It was a wonderful way to go out,” said Henderson. “He gave the winner a great ride.

“The Grand National always has a story behind it and not surprisingly, once again it has another fantastic story.”