While many farms in Stanly County tend to focus their efforts on harvesting a few staple crops, such as cotton, corn, wheat and strawberries, a new farm in Norwood is taking a much different approach.

Maggie Young and her fiancé Sean Simpson are focused on small-scale farming, utilizing roughly one acre of land to grow as many types of crops as possible. Since opening Terra Flora in January, the couple, along with friend Lawton James, have been busy growing and harvesting more than 200 types of crops ranging from peppers, tomatoes, lettuce and broccoli to carrots, potatoes, kale and sunflower shoots, just to name a few.

“We just jam pack as many crops as we can into our beds with a huge variety strewn about,” Simpson said.

And as soon as a certain crop is ready to be harvested, the three-person team works to quickly replace it with something else.

“It’s just a very quick and heavy rotation,” Young said. “As soon as something is done in a bed, we are putting something else in. The space is never wasted.”

Sean Simpson and Lawton James tend to a plot of lettuce.

Simpson and Young signed a three-year ground lease with Nancy and Ron Bryant, who owns the land, which is at 5546 Old Thompson Road. Their hope is to eventually sign a 99-year long-term lease, which is typical for many farmers.

All of the vegetables are organic, though the farm has not yet been certified by the USDA.

“Our farming experience comes entirely from farms that successfully implement organic practices, so we are committed to meticulously following organic standards of growing: no GMOs, no synthetic pesticides, no harmful fertilizers or sprays,” according to its website.

In addition to the diverse produce, which is the focal point of the farm, each member of the team has separate passions they are cultivating. Simpson roasts coffee, James has been fermenting kombucha and young grows edible flowers and enjoys creating cocktails to highlight the seasonal ingredients and flavors.

While Simpson, Young and James have been spending almost all of their time on the farm, where they work up to 12 hours a day, they still have fun. They enjoy cooking and baking in the small house they occupy on the property and make weekend trips to places like Charlotte and Asheville.

For each of them, the farm has provided an intimate space where they can be themselves and do what they love the most.

“I’m of the opinion that peace is attained out there in the field,” James said. “Everything that we do, we do with intention.”

How they got to Norwood

While Young, Simpson and James are not from Stanly County and had never owned and operated a farm prior to a few months ago, their considerable experience in the agricultural industry helped prepare them for where they are now.

A native of Shelby, Simpson, 31, has spent much of the past working on farms across the country. He first spent time in the research field with NC State University studying small scale farming practices in Eastern North Carolina before accepting an apprenticeship at Stone Barns Center for Food and Agriculture in New York and later working at The Culinary Gardener, a two-acre farm outside of Asheville.

Once the pandemic hit in early 2020, Simpson and Young, whom he met in New Orleans in 2017, took a chance and moved to Harborside, Maine to work at Four Season Farm under Eliot Coleman, considered one of the pioneers of organic farming. Simpson eventually was elevated to the position of farm manager while Young, 28, became the assistant farm manager.

“Clara (Coleman’s daughter and the farm director) wanted to give us the opportunity to run the farm and get the experience of what it would be like to pretty much do everything, but with this incredible safety net of her and Eliot both being there and us being able to ask any questions we had,” Young said.

After more than a year working at Four Season, both Young and Simpson wanted to take the chance and start their own farm in North Carolina, which had been their goal for some time. Utilizing NC FarmLink, a program of NC State Extension that connects farmers, landowners and service providers across the state, they discovered the Bryants’ farm, which was listed on a database of available farmland.

The property was the ideal location for the young couple but it already had existing infrastructure and was close to where their families lived.

They arrived Norwood in October and began setting up greenhouses and preparing for the beginning of the spring season. Wanting another trusted confidant by his side, Simpson on a whim reached out to his college friend James, 31, who had been in Southern Oregon for the past six years learning all about soil science and plant health, and invited him to join them in Norwood .

James quickly jumped at the opportunity to be reunited with his good friends.

“I guess the universe kind of conspired,” James said about Simpson contacting him. “I was not in a great situation and I was like, ‘You know what, I love these guys and at this point, there’s nothing else I’d rather do.’ ”

Even though he didn’t know if the farm would become viable, James knew at the very worst, he would get to have some fun with his friends.

Simpson and Young were confident they could open their own farm based on everything they learned while up in Maine.

“We learned at the farm in Maine, it doesn’t really matter what your experience is, it’s about your attitude and how well you work together and we knew that would be fine,” Young said. 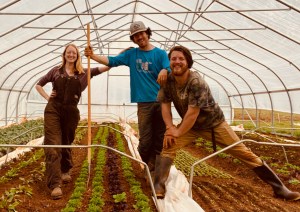 Forming relationships with the community

To ensure the team can continue to grow and provide high-quality produce for years to come, Terra Flora utilizes what’s known as a Community Shared Agriculture model. Individuals buy shares of the farm’s produce at the beginning of each season, allowing the farm to cover costs for things like wages and necessary supplies. The individual investors then receive a weekly box of production for the duration of the season.

People can pick up the boxes either at the farm or at the Matthews Community Farmers Market. The team also plans to have pick-up locations available in Albemarle.

“It’s great for them because they have guaranteed vegetables and it’s great for the farm because it means we have income, especially the beginning of the season…when usually our belts are the tightest,” Simpson said. “It really is community supported agriculture.”

On the farm’s website, it lists all the kinds of produce that will be offered as part of the CSA shares each season. More than 30 vegetables are included as part of the spring season including arugula, snap peas, potatoes, cauliflower and several kinds of lettuce and kale.

There are also a few items people are likely less familiar with such as chervil and tatsui.

“We’re hoping to expose people to vegetables they’ve never had before,” Simpson said.

Terra Flora has only five CSA investors for the spring season, an intentional decision to start low to ensure enough produce was provided. Even as the team become more familiar with the land and how much they can reasonably expect to grow, they are still aiming to keep membership relatively exclusive.

“I think we’re always going to keep it on the lower side just because we’re hoping to have a very curated box of the highest quality and make it a limited thing with specialty items that you wouldn’t get normally,” Simpson said.

And with produce pickups happening each week, it allows the farmers to form more substantive relationships with the community investors than they otherwise would have.

The team has also been having initial discussions with local chefs about showcasing their produce in restaurants around the county.

Though still in the early stages of the farm, Young, Simpson and James are excited for people in Stanly County to be introduced to the many flavors they’ve been cultivating.

“It’s really incredible to start feeding people and start to hear feedback,” Simpson said. “For most of our stuff, once somebody tastes it, that’s it. They come back and they say, ‘That is the best thing I’ve ever had.’ “